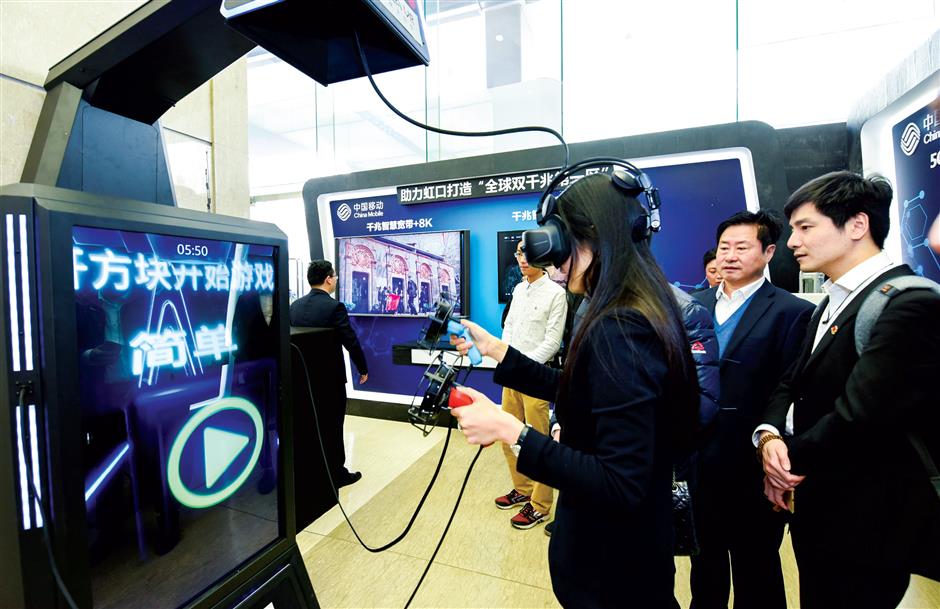 A visitor tries her hand at an online game via the 5G network recently unveiled in Hongkou. The Shanghai district is the first area in the world with 5G connectivity and a broadband gigabit network.

Hongkou District has become the first area in the world with 5G connectivity, as well as broadband gigabit network.

A total of 228 5G base stations have been deployed in Hongkou, making it the first district in Shanghai fully covered by a 5G network and a gigabit broadband network.

Test data showed that 5G network is able to provide a peak single-user download speed of 1.6 Gbps, nearly 16 times faster than that of 4G. Aside from speed, the low latency of 5G network is especially helpful for applications of the Internet of Things.

At the launch ceremony of the 5G trial network in Hongkou, Vice Mayor of Shanghai Wu Qing made the network’s first 5G video call on a Huawei Mate X, the first phone with 5G capabilities.

Zhang Jianming, deputy director of the Shanghai Commission of Economy and Informatization, said the city aims to build over 10,000 5G base stations by the end of the year, and the number is expected to exceed 30,000 by 2021.

To support the development of the technology, Hongkou has launched a 5G Global Innovation Hub in the North Bund area. The hub will include exhibition, innovation, applications and promotion of 5G technology to make Hongkou and Shanghai an information technology highland, according to the district government.

As a key site for Hongkou’s development, the North Bund area along the Huangpu River has gathered over 4,500 shipping companies and 1,200 financial companies and institutions. Over 3 million square meters of office buildings have been built along the riverside to offer a first-class environment and services to global companies and professionals.

Government-backed foundations will incubate a batch of applications and projects on 5G as well as support a group of startups and small and medium-sized enterprises to become industrial leaders with global influence, the Hongkou government announced.

Hongkou-based companies and individuals are encouraged to take part in the coming 5G innovative application competition to develop a number of characteristic 5G applications and prepare for the commercial operation of 5G services, the district government said.

Also in Hongkou, the Shanghai General Hospital and China Mobile have recently announced a partnership on 5G technology.

According to the hospital and Shanghai Mobile, 5G may be the deciding factor between life and death. The duo has announced plans to establish a 5G technology-based treatment center. 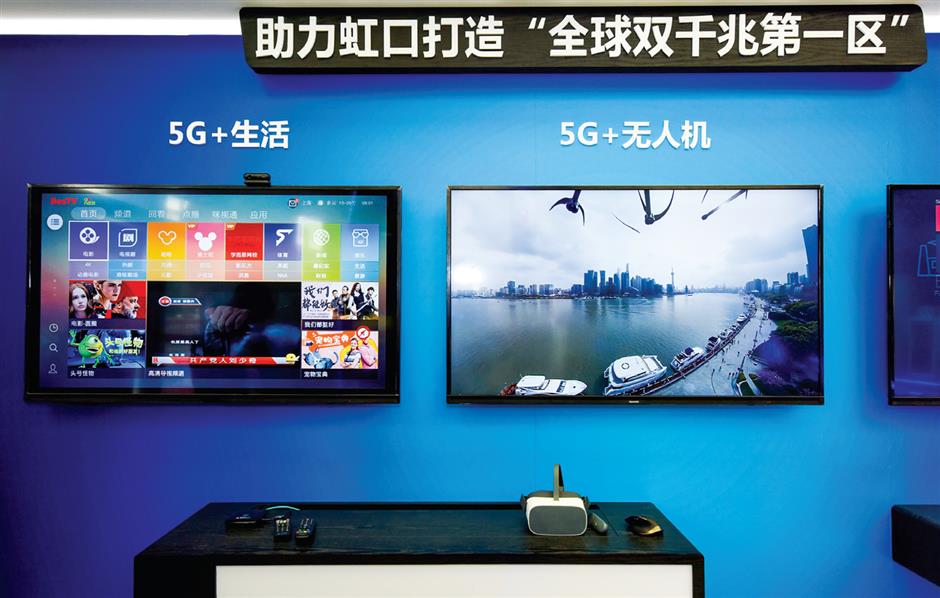 The 5G network is aimed to be applied in various aspects in Hongkou District, including smart life, entertainment and urban management.

The faster connection is key to “golden time” in emergency medical treatment. For example, a patient’s heart and brain could be damaged by more than an eight-minute lapse in treatment of urgent cerebral-cardio vascular diseases like strokes and heart attacks.

The new technology can greatly improve the efficacy of first aid, in-hospital services and followup treatment management. In addition to saving time and providing timely data, 5G also can streamline the use of artificial intelligence and augmented reality technologies in hospitals.

The vastly faster speed it brings is expected to be a dramatic boost for industry and consumers — for everything from health care and manufacturing to smart driving, high-definition streaming and urban management, according to the Shanghai economic and informatization commission.

Shanghai’s latest move adds to a recent trend of Chinese cities adopting 5G networks to meet public demand. In late January, an airport in south China’s Guangdong Province launched a 5G base station. An indoor 5G network will be installed in the Shanghai Hongqiao Railway Station by the end of this year.

The city government will support 100 5G-related innovation companies to boost the development and ecosystem of the new technology, said the commission.

Various 5G applications are being demonstrated in Shanghai, covering electronics manufacturing and urban management. Consumers will one day have access to the network with their current SIM card and number. But they will have to buy new 5G phones, which are expected to stimulate the saturated smartphone market in China.

Hongkou has been developing an innovation network to boost its scientific and technological development on new technologies such as the ultra-fast 5G services.

The district government and the Chinese Academy of Sciences Holdings Co jointly launched the CASH International Innovation Industrial Base at the North Bund early this year.

Hongkou will enhance cooperation with world-famous technology transformation platforms and incubators to attract third-party scientific service institutes, according to the district government. The 5G Global Innovation Hub, for instance, is expected to become a bridgehead for international technology transferring and achievement transformation.

The China-Israel International Innovation Harbor in Hongkou will work with the other Sino-Israel innovative parks across the Yangtze River Delta and promote the cooperation between the two countries. A BMW innovation center and a Sino-Belgian incubator are also planned.