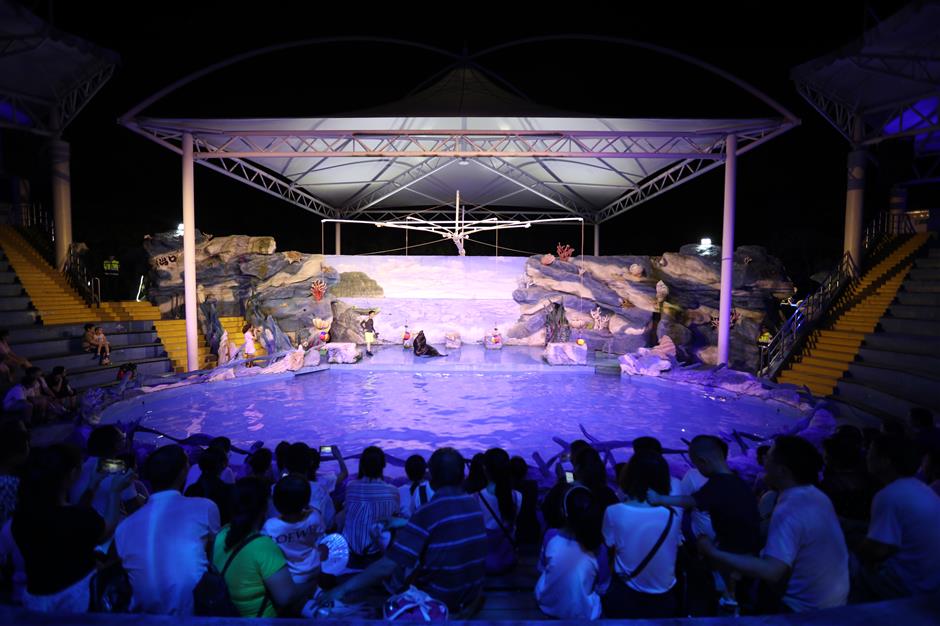 The sea lion show at the Shanghai Wild Animal Park

Shanghai's cultural and tourism authorities have released a list of more than 100 cultural venues and tourist attractions that open at night.

It is part of the city's efforts to enrich the night leisure life of residents and promote the development of a night economy.

The list includes 105 scenic spots, art galleries, museums, parks, bookstores, and tourist and cultural complexes across the city, the Shanghai Administration of Culture and Tourism said.

It is the first time that such list has been compiled.

"The night economy is an important part of the urban economy, and its prosperity is an important sign of the openness and vitality of a city's economy," said Chen Ping, director of the market promotion department of the administration.

A beautiful landscape is the essence of a night economy, and fashion life is its theme, said Chen.

"Haipai (Shanghai) culture is its quality and soul," Chen added.

In April, nine authorities in the city including the Shanghai Commission of Commerce and Shanghai Administration of Culture and Tourism released a guideline to promote the development of the city's night economy.

"These venues include both traditional tourist attractions and emerging business, tourist and cultural complexes," said Chen.

The iconic Shanghai Oriental Pearl TV Tower in the Pudong New Area which remains open until 11pm is staging three dome shows every night. Thirty high-definition projectors are used, as the audience is taken on an adventure exploring Shanghai in light and shadow. The shows are free with reservations required.

The Shanghai Wild Animal Park will stay open until 9pm from Thursday, allowing visitors to explore the magic and glamor of the animal world after sunset.

Many wild animals such as tiger, lion, raccoon, Central American tapir and anteater are active at night.

The 88-floor sightseeing observatory of Jin Mao Tower will be open to 10pm.

The Shanghai Happy Valley in Songjiang District stages a multimedia water show every night, together with stunt shows and electronic music performances. It closes at 9:30pm.

The Shanghai Haichang Ocean Park in Pudong is hosting light shows and electronic music parties, and it is hosting night sessions through August.

The Jinjiang Amusement Park in Minhang District has prepared a themed light show in seven areas with different stories. It closes at 10pm.

The Shanghai Ocean Aquarium in Pudong has extended its opening hours to 9pm until the end of August, while the Dongtan Wetland is hosting night parades and camping activities over summer.

Museums and art galleries are also hosting exhibitions and lectures to present the cultural allure of the city's night life.

The Shanghai Museum in Huangpu District is hosting lectures and cultural activities at night, while a Jingdezhen porcelain exhibition and a Pacific art exhibition are underway.

The Shanghai Museum of Glass is staging lectures and psychodramas at night, while the Shanghai Film Museum and Shanghai Meteorological Museum will host museum magic night tours in September.

The administration has ordered the operators of tourist attractions and cultural venues to ensure quality service and safety.