Zhao Qizheng has worn many hats of public service, but the 79-year-old former Shanghai vice mayor may be best remembered for his pioneering work in transforming the Pudong New Area from farmland into one of the world’s most spectacular finance and commercial centers.

Indeed, he is often referred to as “Pudong Zhao.”

But his years of service go beyond that. The works of the one-time head of the Information Office of the State Council, China’s Cabinet, have been published in both Chinese and English. He is considered an authority on public diplomacy, whose ideas on communications between cultures have earned him a wide following.

In 2006, he published “Riverside Talks: A Friendly Dialogue Between an Atheist and a Christian.” It records his exchanges with international evangelist Luis Palau in 2005.

Zhao, a graduate in physics from the University of Science and Technology in Anhui Province, was then serving as chairman of the Foreign Affairs Committee of the Chinese People’s Political Consultative Conference. He invited Argentina-born Palau, who was on his fourth tour of China, to a discussion on the banks of the Huangpu River. It ranged from Darwinism and philosophy to God and harmony.

Zhao said he believes that such communication between Chinese and foreigners has greatly increased understanding on both sides, though he still sees misconceptions about China in the international media. He blames both sides. 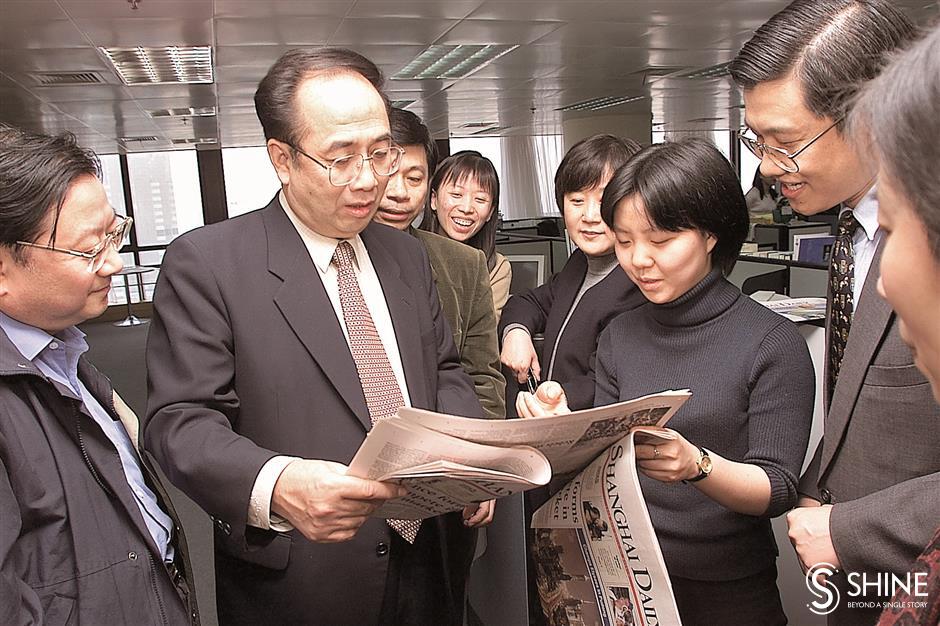 Zhao Qizheng (left), then director of the Information Office of the State Council, talks with Shanghai Daily staff in this 2000 file photo.

“The China in international media is very different from the China we live in,” Zhao told Shanghai Daily shortly after a speech at a newly opened technology industrial zone in Pudong. “But we shouldn’t always just complain about foreign correspondents or other writers for creating misconceptions. Of course, some of them do have biases or don’t live here, but also we need to think about whether we have delivered clear and accurate messages effectively.”

He added, “It is a responsibility of the Chinese media to inform the world about China. If you don’t believe your story, don’t write it. If you don’t know what you are writing, do your homework and get everything crystal clear before you deliver information. If you are not touched by your stories, don’t deceive yourself that they will resonate with others.”

Young people who attended his standing-room-only speech in Pudong could hardly imagine what the area looked like in the early 1990s. Many of them seemed captivated by Zhao’s sharp memory and dynamic energy as he recounted encounters and dialogues with world leaders and multinational executives. He talked of his moments of hope and despair, and his enduring desire to communicate with the world.

After the speech, audience members lined up for autographs and selfies with Zhao. We had to steal the popular storyteller aside for a short dialogue with Shanghai Daily.

Zhao is closely associated with the newspaper’s origins. He explained that the daily was born of a desire to tell Shanghai story to the world.

“When the central government made decisions on developing Pudong, we were so excited,” he said. “At that time, we vowed to make Pudong a vital link in the goal of reviving Shanghai through a globalized economy. We wanted to communicate with the world and foster political, economic and cultural exchanges. In short, we needed an English-language newspaper in the city.”

Zhao was among the many municipal government officials, including then Shanghai Mayor Xu Kuangdi, who actively supported the birth of Shanghai Daily in October 1999.

“The story of Shanghai is an essential part of the China story,” Zhao said. “Shanghai is an ideal platform for viewing the economic development of China because it has traditionally been a commercial center. The development of Pudong increased foreign interest in the city, and Shanghai Daily played a key role in Shanghai’s communications with the world.”

Zhao, who at that time was leading the central government’s information office, became the “go-to person” for many foreign correspondents seeking official responses.

“I gave them answers, or if I couldn’t do that immediately, I got back to them with answers,” he said.

In the 1990s, inquiries from journalists were unfamiliar territory for many officials. Zhao continued to encourage authorities to communicate even after he moved to Beijing, where he spearheaded the first national training for government spokespersons in 2003 as part of his job as head of the State Council’s Information Office.

“In the past, both sides didn’t know or understand each other very well,” he said. “That situation has greatly improved over the years. We can express ourselves more accurately in English. We are also more culturally sensitive about differences in religion and ideology, which is why we communicate with respect for different religions and cultures. Our media are more mature, and we are better at telling our stories to the world.”

Zhao (right) outlines the development of Pudong to then Deputy UN Secretary-General Kofi Annan who was on a visit to Shanghai in May 1995.

It helps, perhaps, that foreign interest in China has been on the rise.

“China and Shanghai have gone through dramatic transformations in the last 40 years,” Zhao said. “China was tiny in the global economy then, and now it’s an economic powerhouse with widespread influence. The world has its eyes on China and wants to be well-informed about events here because it affects business, development and lives abroad. This is a particularly good time to tell our stories.”

Before returning to autograph seekers, Zhao took a few minutes to grade Shanghai Daily and share his vision for the paper in the digital age.

“Shanghai Daily is closely tied to the development of the city and the country, with great reporting that addresses the interests of foreign readers,” he said. “Your influence is not limited to the paper itself, but also by the international media organizations that pick up your stories.”

He concluded, “You are rooted in the city’s economy and culture, and you have grown into a large tree after 20 years. I hope you continue to grow and contribute to the development of Shanghai and Yangtze River Delta region. I wish you well.”