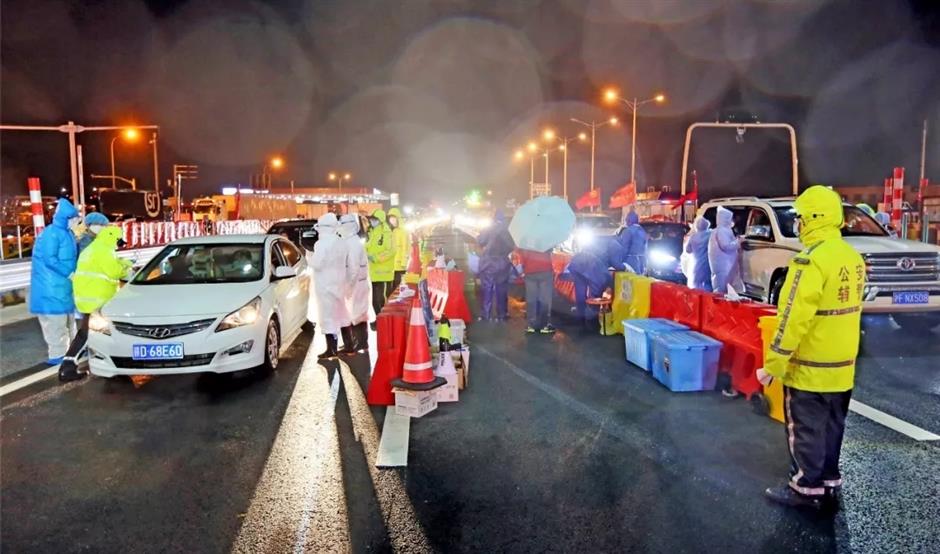 Police, medical workers and volunteers are on duty at the Fengjing checkpoint on the G60 Hukun Expressway in Songjiang District. 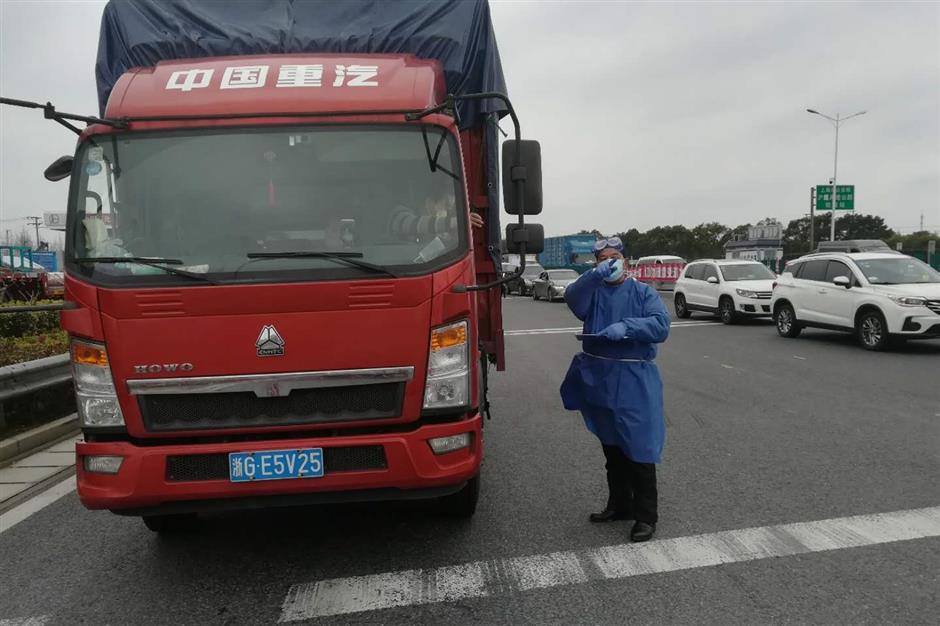 Xia Ruilin guides a truck at the Fengjing checkpoint of G60 Hukun Expressway in Songjiang District.

He is the oldest volunteer at the Fengjing checkpoint on the G60 Hukun Expressway in Songjiang District, and his duty is checking the temperatures and information of each driver and passenger entering the city.

His work requires him to stand at least eight hours per day, which is no easy assignment for him, who normally works at the Yexie Town office for disabled people in Songjiang.

Despite his age, Xia applied to be a volunteer at the checkpoint without hesitation.

"I want to make my contribution in the battle against the novel coronavirus epidemic," he told Shanghai Daily. "Only two staff at my office are men, and there was no reason to shirk."

Xia said his back aches after a day of standing, and sudden plummeting temperatures and snowy weather over the weekend made the situation even more difficult.

"My raincoat was blown away by strong winds, and my clothing was totally soaked by snow and rain," he said. "My hands are frozen to numbness, and my protective glasses are full of vapor due to the low temperature."

"It's often difficult to walk even a step after a day's work due to the long-time standing, and my eyesight is not good," said Xia. "But I never regret my decision."

Indeed, Xia is like a well-trained solider and steadfastly sticks to procedure.

"36.8 degrees: normal," Xia said loudly to a medical worker at his side after taking the temperature of one driver. He then asked for information about the driver's recent travel history and checked his registration information carefully.

After he finished checking all people in the vehicle, he quickly moved to the one behind it.

While Xia's duty is to help people reach their destinations in Shanghai safely, he has not returned to his own home since January 27 due to concerns of potential infection to his own family members.

"I do not tell my father I am working at the checkpoint because he will worry," Xia told Shanghai Daily. 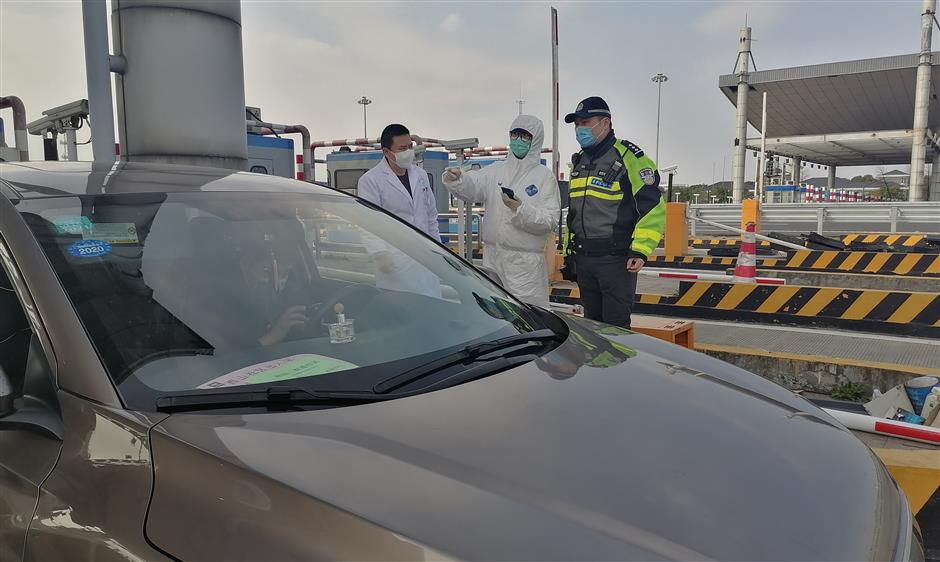 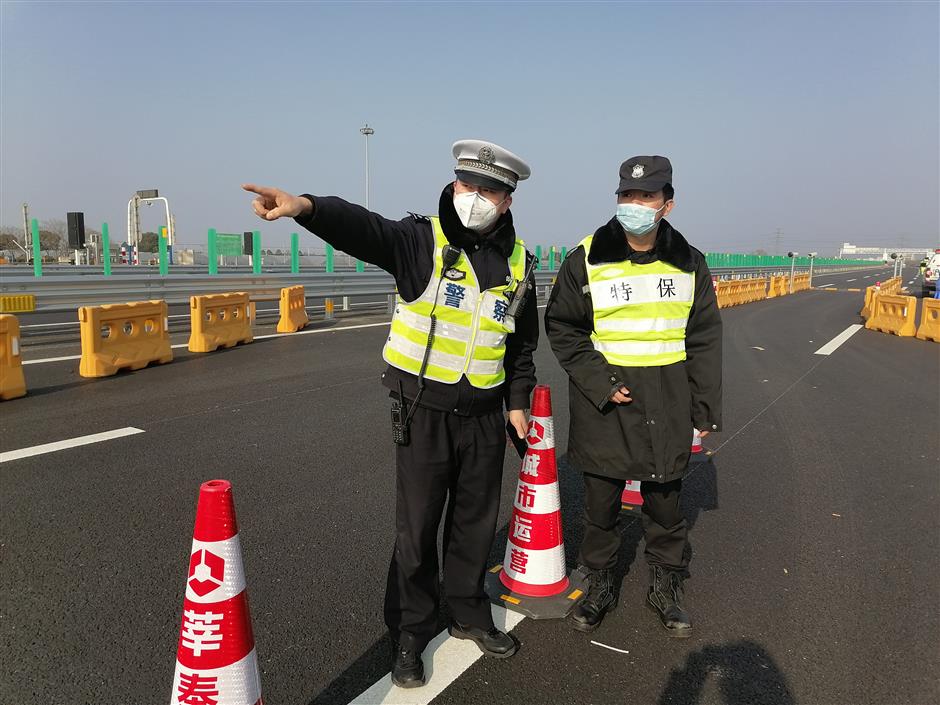 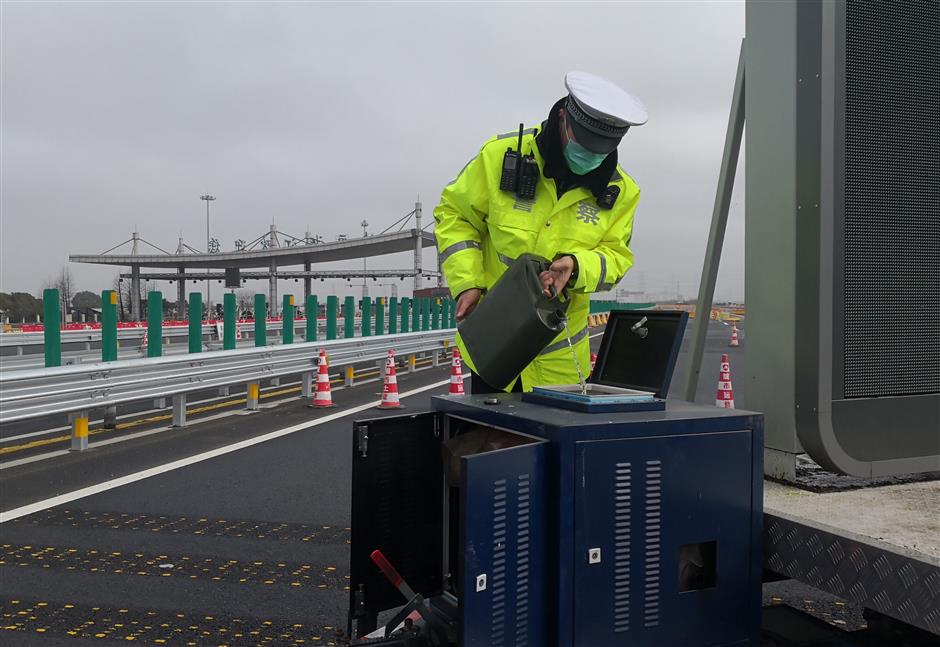 Xu Siying adds fuel to a generator at the S32 Shenjiahu Expressway checkpoint in Qingpu District.

"It is our duty to safeguard the western entrance of Shanghai and ensure the health and safety of Shanghai residents," Xu Siying, a traffic police officer with the Qingpu District Public Security Bureau, told Shanghai Daily. He has been working 12-hour shifts at the checkpoint since January 27.

His duty is to check information and maintain order at the checkpoint. With people returning to work, the daily traffic flow through the checkpoint is about 5,000 vehicles and some 13,000 people.

The traffic peak is from 1pm to 10pm and sometimes there is heavy congestion, said Xu.

Every vehicle, driver and passenger passing through the checkpoint are strictly screened.

People who have come from key infected areas are required to be placed under home quarantine for 14 days. And those without residence or employment in Shanghai are persuaded to turn back.

Police accept residence cards, employee cards, property ownership certificates, student cards and other documents as proof of residence or employment in the city.

Due to a lack of protective gear, Xu spares protective clothing to his colleagues to ensure their safety.

"Sometimes, we need to use equipment repeatedly with disinfection," he said.

The temperature in the district plummeted to minus 3 degrees Celsius during recent evenings.

"I have prepared heavy clothing such as helmets, hats, gloves and scarves for my brothers," said Xu, referring to this colleagues. 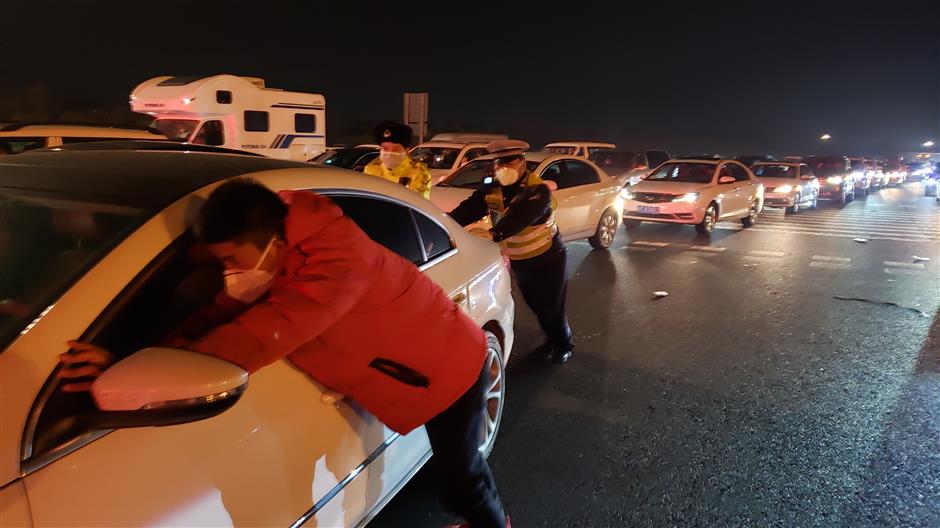 Traffic police push a broken-down car away from the S32 Shenjiahu Expressway checkpoint in Qingpu District. 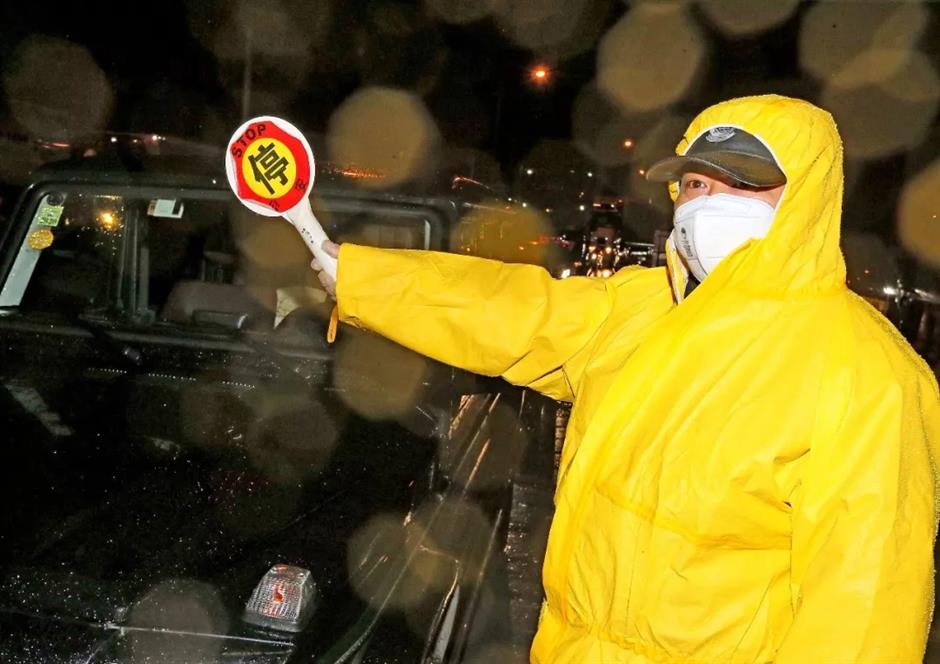 A police officer directs traffic at the Fengjing checkpoint of G60 Hukun Expressway in Songjiang District. 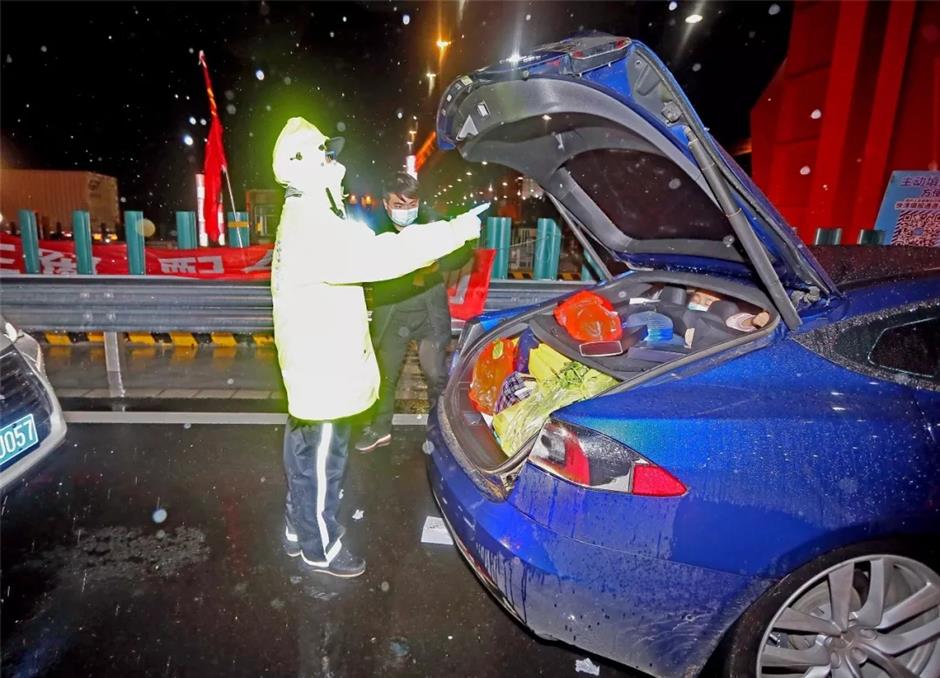 Braving the snow, a police officer checks a car at the Fengjing checkpoint of G60 Hukun Expressway in Songjiang District.

However, even with the heavy clothes it was still freezing amid snow and gale winds.

"Standing at the checkpoint in the snow for hours makes it difficult even to hold a pen and thermometer, but nobody complains," said Xu.

Tents were set up overnight to provide a relatively warm place for team members, and ginger tea was prepared as well.

It takes about two minutes for a vehicle to get through the checkpoint if the information has already been submitted online. If not, they need to complete a form and this can take up to five minutes, according to Xu.

Once a vehicle broke down at the checkpoint, leading to more than 1 kilometer of gridlock behind. Xu and his colleagues had to push the car aside to smooth traffic.

Qian Lei, 48, deputy director of the Liantang Town community health service center, is at the checkpoint to double check the information of drivers and passengers.

Those who have abnormal temperatures will be sent to him for further checkup.

Fever patients from key infected areas will be placed under quarantine.

He often works from midnight until the morning.

"As a medical worker, it is our responsibility to be at the front line during the epidemic period," said Qian. 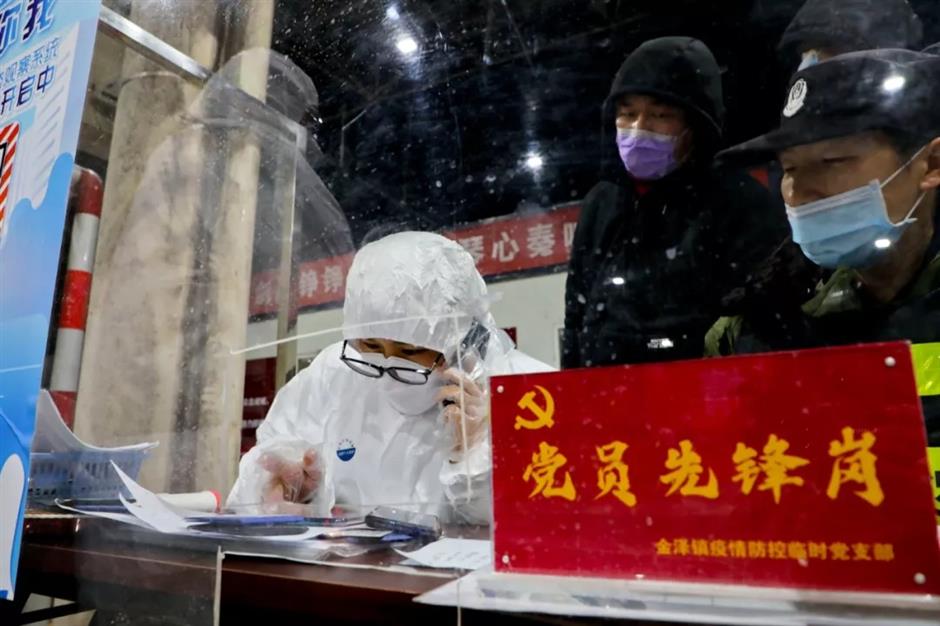 A driver has his temperature taken at the Fengjing checkpoint on the G60 Hukun Expressway in Songjiang District. 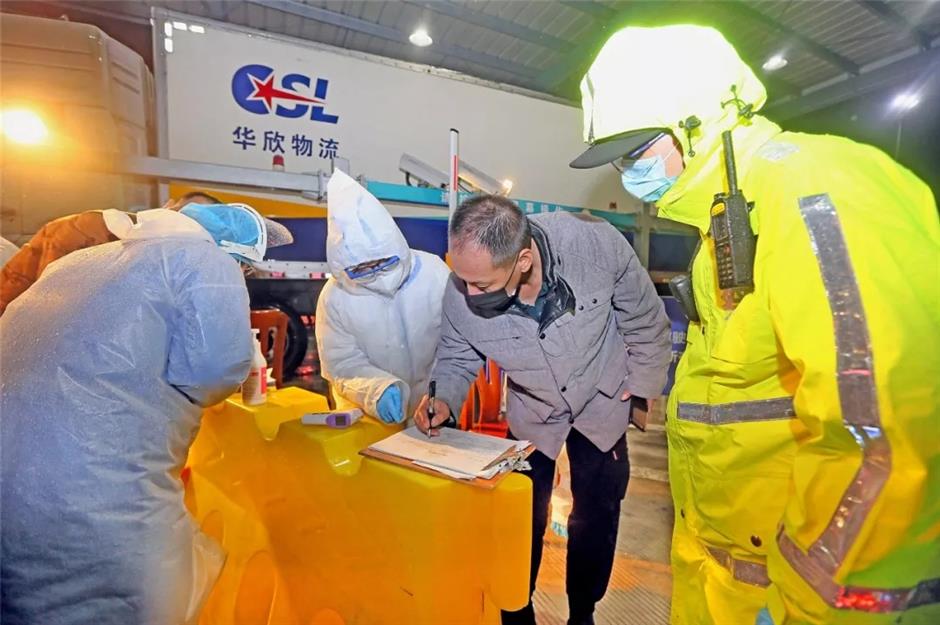 A driver registers information at the Fengjing checkpoint of G60 Hukun Expressway in Songjiang District.