How Shanghai controls the influx of coronavirus cases from overseas

On the Front Line
Shot by Zhou Shengjie and Jiang Xiaowei. Edited by Zhong Youyang. Subtitles by Wang Xinzhou and Andy Boreham.

South Korean Lee Dong-min landed at Shanghai’s Hongqiao Airport around 1pm on Tuesday from Seoul. Less than 4 hours later, the 20-year-old Fudan University student was chatting with his mother at his home in Minhang District after avoiding contact with any member of the public on the way.

The Shanghai government has beefed up measures to prevent an influx of coronavirus cases from overseas. People who have lived or traveled in South Korea, Italy, Iran, Japan, France, Spain, Germany and the United States, — the eight countries hardest hit by coronavirus outside China — in the 14 days prior to their arrival must undergo a 14-day quarantine at home or at designated places.

Customs officials now put green, yellow or red tags on passengers’ passports. Cai Yihui, director of Minhang’s civil affairs bureau, said red includes passengers who have lived or traveled from the hardest-hit areas in the most-affected countries, for example, Daegu in South Korea. These people are driven to designated places for quarantine by customs authorities.

People who have been in badly hit countries but not in those countries’ worst hit areas are tagged yellow. They can’t take public transport or taxis from the airport.

Green is for passengers given the all clear.

In a bid to ensure total non-contact transport of passengers with yellow tags from airport to their doorstep, officials from the city’s 16 districts, as well as neighboring Zhejiang and Jiangsu provinces, have set up reception desks and transfer teams at Hongqiao and Pudong airports to register their details and take them home.

Though it took Lee much longer than usual to get home, he said the measures were understandable in the fight against the virus. 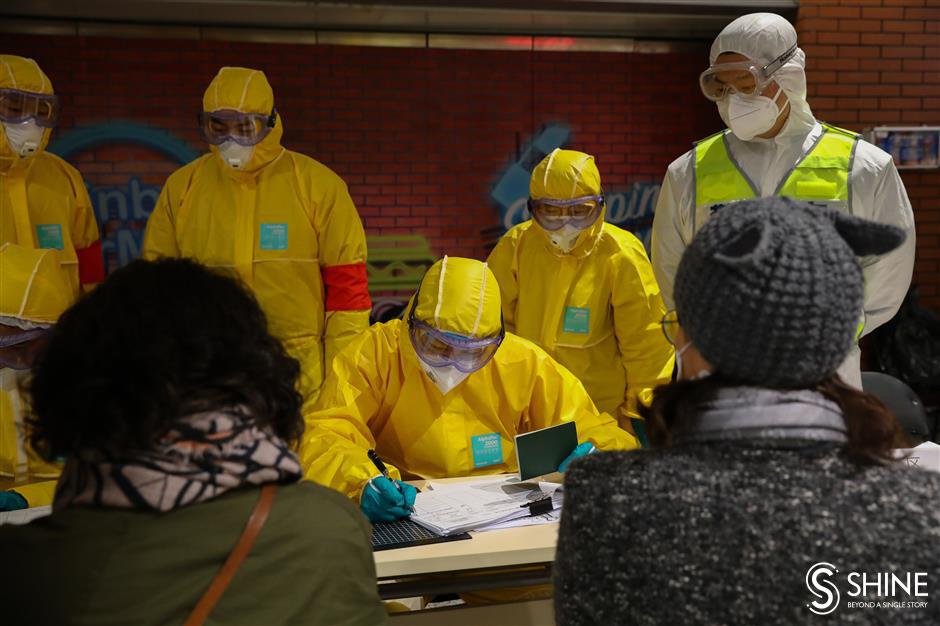 This Shanghai Daily reporter met him at Hongqiao’s arrival hall at 3:44pm, when he was guided to the Minhang District reception desk.

Lee said he had filled out a health declaration card on the flight. After landing, customs officers boarded the plane and conducted an inspection, but his temperature wasn’t checked.

After disembarking, passengers were divided into four groups and led out group by group. He was in the third group comprising those living in Shanghai. He was then asked a number of questions to determine his exposure, if any, to the disease.

After a police officer verified Lee’s passport, which had a yellow tag, a Minhang volunteer asked whether someone was picking him up and where he lived. Lee didn’t have a pick-up and gave his address: Hongxin Road in Hongqiao Town. 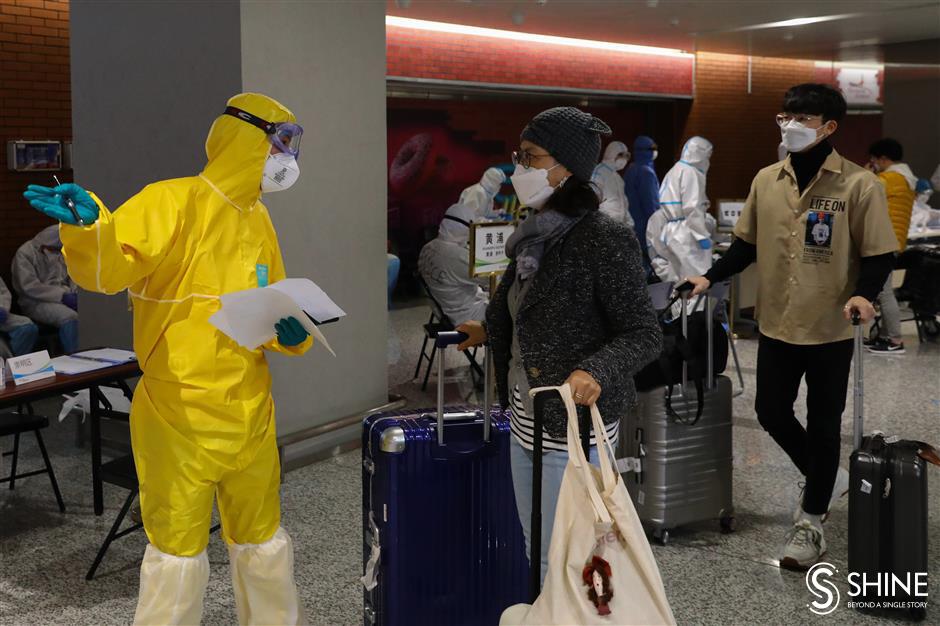 Volunteer Chen Chen guides Lee Dong-min (right) and another passenger toward a designated bus parked at the Hongqiao airport, which will take them to the transit spot in Minhang District.

After checking all the information on his passport and the form, Chen Chen, another volunteer at the reception desk, accompanied him and another Korean female passenger to a parking lot.

Chen sent information about the pair to a WeChat group to notify a liaison person at the transit point about the number of passengers, their subdistricts or towns as well as their departure time. On receiving such messages, liaison persons are supposed to inform staff of the related subdistricts or towns to be in place at the transit point to pick up the passengers.

Chen is one of 153 volunteers picked from officials in different government departments in Minhang to help at the two airports as well as at the transit station.

Wearing a hazmat suit, an N95 mask, a pair of medical goggles, latex gloves, and head and shoe covers, Chen is part of a team which has been working at the Hongqiao airport in three groups on two shifts since March 6: 12pm-6pm and 6pm-12am.

They are one of the busiest district teams in Hongqiao due to the large number of Koreans living in Minhang.

As of Wednesday night, the district had dealt with 344 arrivals at Hongqiao, 266 of them South Koreans, according to Liu Yonghong, deputy head of Minhang’s civil affairs bureau.

Chen said the volunteers lived in a nearby hotel and didn’t go home because of the risk of spreading the virus if they got infected.

At 3:53pm, a car with Lee and his fellow passenger, left the airport, followed by a police car. 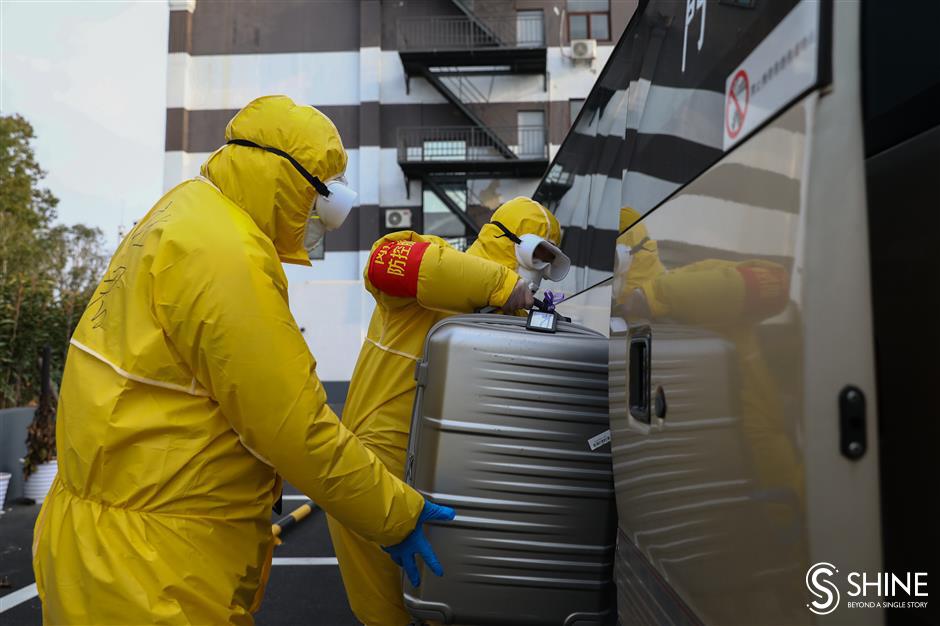 The transit point is outside a hotel on Huaxiang Road. For those with no permanent residence in Shanghai (e.g. those on a business trip to Minhang and planning to stay in a hotel), they are sent to the transit first, then to two designated hotels for quarantine. (people with Chinese nationality to this hotel; foreigners to the other hotel)

Chen recalled another passenger from South Korea who was worried and upset because he thought he would be taken to a designated hotel for quarantine though he had been informed earlier that the hotel was just a transit point. He would be taken home from there.

“I could understand the passenger’s anxiety because it was late at night and he had been kept at the airport for a long time due to stricter prevention measures,” Chen said. “I explained to him patiently, to calm him down. So our volunteers try their best to make the whole process as smooth and fast as possible to save the waiting time for passengers.”

Chen said passengers were now more amenable to the transit/transfer scheme, with some even telling their relatives or friends not to pick them up by car after learning about the designated buses. Volunteer Li Kui of Hongqiao Town reports to those back in the community that he is accompanying the two passengers, including Lee, on their way home.

Lee and his fellow passenger got on another bus sent by the town. But the liaison person told Li to wait awhile because another passenger living in Hongqiao Town was coming from Pudong airport and was scheduled to arrive before 4:30pm. “If we don’t wait for him, he would need to wait for a long time to get the next bus.”

Six minutes later, Michael, a Chinese-American, reached the transfer station on a bus from Pudong. He then boarded the town bus with Lee.

Michael said he had flown from Atlanta, Georgia, via Incheon, South Korea, to Shanghai. After landing at Pudong at about 12pm, he underwent the same procedure as Lee. After passport and visa control, he was guided to the Minhang reception desk.

“It was moving smoothly. I was initially a little concerned. But after chatting with Mr Ni and Mr Wu (two volunteers accompanying him to the transit), I started to felt comfortable. They were friendly and fully responsible,” he said.

The bus left the transit point at 4:17pm, with Lee’s home the first stop since it was the nearest. 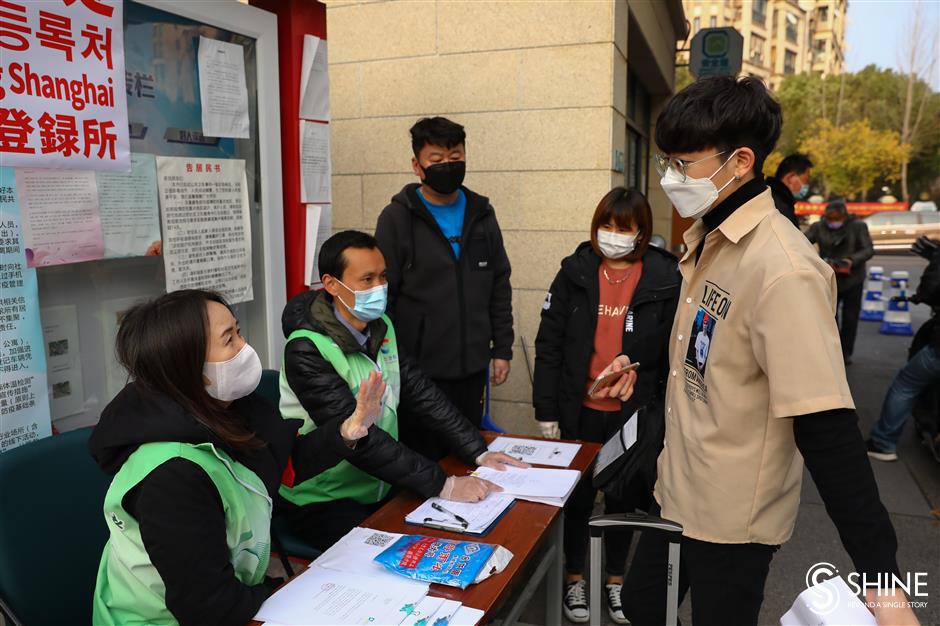 At 4:33pm, when the bus arrived at Jingting Garden where Lee lives, Sun Minglin, Party secretary of the neighborhood committee, a doctor from a local health service center, a police officer and volunteer interpreter Han Jinghua were already waiting.

Lee was guided to register his health information, sign a home quarantine commitment letter and had his temperature checked at the entrance to the neighborhood. He was given a notice in Korean about home quarantine instructions.

He was told not to worry about food and daily necessities because community workers could deliver his shopping by requesting the service on a WeChat group set up for communication between local officials and people from high-risk nations. He needs to check his temperature twice a day and report to the chat group. His garbage would be cleared every two days.

When Lee finished all the procedures and reached home, officials told his mother that she would also need to undergo 14-day quarantine at home.

The above procedure is for arrivals with yellow-tag passports who live in Shanghai and don’t have anybody picking them up at the airport. But people being picked up need to not only provide their personal information, such as address and mobile number, but also details about the pick-up person such as the driver’s name, mobile number and driving license number.

District staff will accompany passengers to the cars waiting for them, and register the drivers’ information and verifying car plate numbers.

Before letting them go, staff will tell driver and passenger they cannot go anywhere but to the registered address, and the community workers would be waiting for them there.

The information is sent to related subdistricts or towns which will pass it to local communities. When passengers arrive at their neighborhoods, a team of neighborhood officials, a doctor and a police officer will be there to guide them to home quarantine.

Cai, at the civil affairs bureau, said that though the team of neighborhood workers called private car pick-up passengers on their way home to double check with them, some still changed their destinations.

“Once a passenger didn’t drive to the address he gave us. When the team of neighborhood workers called him, he said he wouldn’t go there but was on his way to Ningbo. We asked him to tell us the exact address in Ningbo and sent the information to the quarantine work team of Zhejiang Province at Hongqiao airport, who would then inform the concerned neighborhood to follow up.

“We also told the passenger that his actions amounted to violation of quarantine rules, and he will be held accountable in the case of consequences,” Cai added.