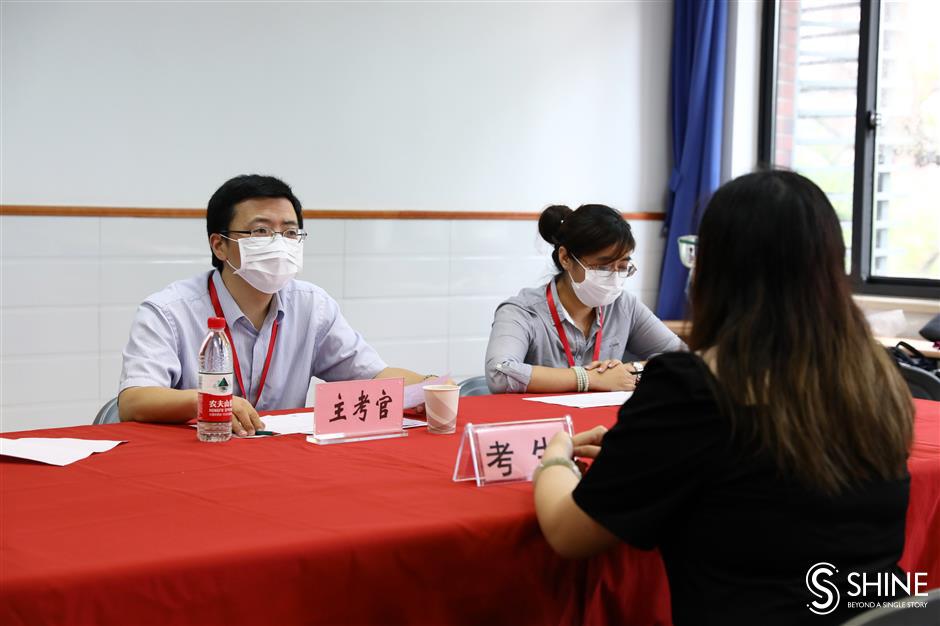 An applicant attends an interview in Putuo District on Sunday. 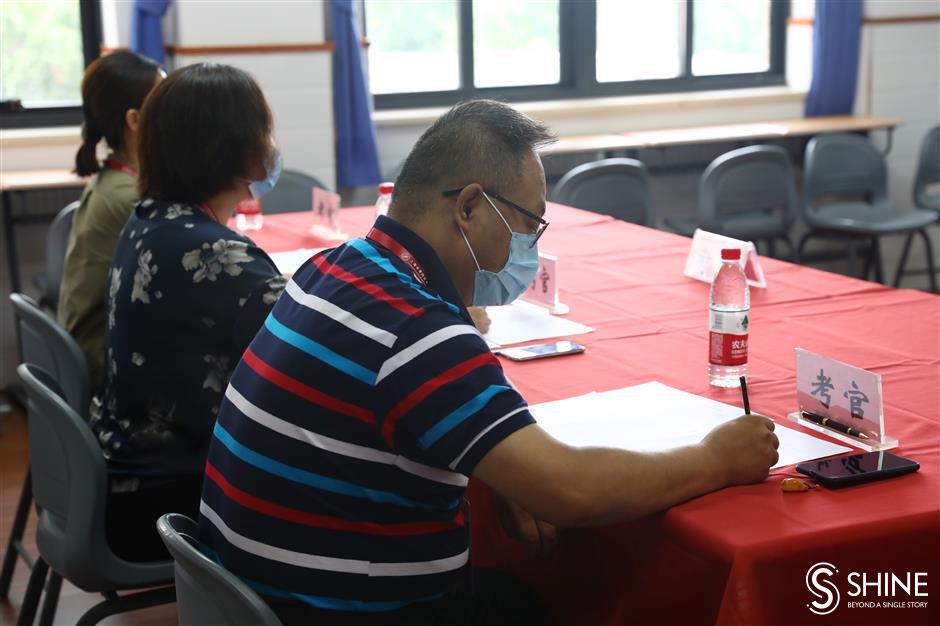 Examiners take notes during the interview.

University graduates with Shanghai hukou, or registered residency, and graduates from universities in Shanghai are eligible to apply.

The positions are at the grassroots, and related to community service and management. Community workers are based in residential complexes and public affairs service centers of subdistricts and towns, the bureau said.

The recruitment aims to provide job opportunities for university graduates and attract talent to the grassroots, the bureau said.

An interview was conducted in Putuo District on Sunday, with the whole recruitment scheduled to be completed before mid-August.

The recruitment drive is hosted by the bureau, Shanghai’s human resources and social security bureau and Shanghai Education Commission.

"The public recognition of community workers has increasingly improved, and more university graduates are joining the team," said Jin Lihui, deputy director of the grassroots work department of the bureau.

Shanghai has registered 52,000 community workers with an average age of 39. They have played an important role in the prevention of coronavirus outbreaks at communities, in garbage sorting and environment treatment.

The team was formerly made up of the middle-aged and seniors, which has changed now, said Jin.

A community worker post in the city previously attracted more than 70 applicants, according to Jin.

"The city's community worker team is turning younger and younger," she said.

"We want to have more fresh blood in the grassroots and hope these young people will lift the management level of communities."

Community workers are required to have the capability of tackling contradictions, crisis management, new media use and property management, the bureau said.

"They are required to have a dedicated spirit and modern management concepts," said Jin.

"Young community workers have advantages in communication and psychology."

In Putuo District, 31 posts are available with more than 600 applications received.

"During the epidemic, many university graduates saw how community workers contributed to the prevention and control of the COVID-19 with their dedication and hard work, which has changed their deeply-rooted impression of social workers," said Li Yunjiao, deputy director of the Putuo District Civil Affairs Bureau.

"They are quick learners and are good at communication," she added.

Hou Yue, a postgraduate of the University of Birmingham and one of the applicants, said: "I have noticed the big contributions community workers have made in preventing and placing the epidemic under control."

The 23-year-old, majoring in international business management, applied for a post at the service center for enterprises of Zhenru Town Subdistrict in Putuo.

"I am confident of the huge development potential of Zhenru Town," she said.

"The job suits young people, and community development calls for science and technology approaches which young people are good at.

"I want to start my career from the grassroots and the job can help me learn a lot and accumulate social experience."