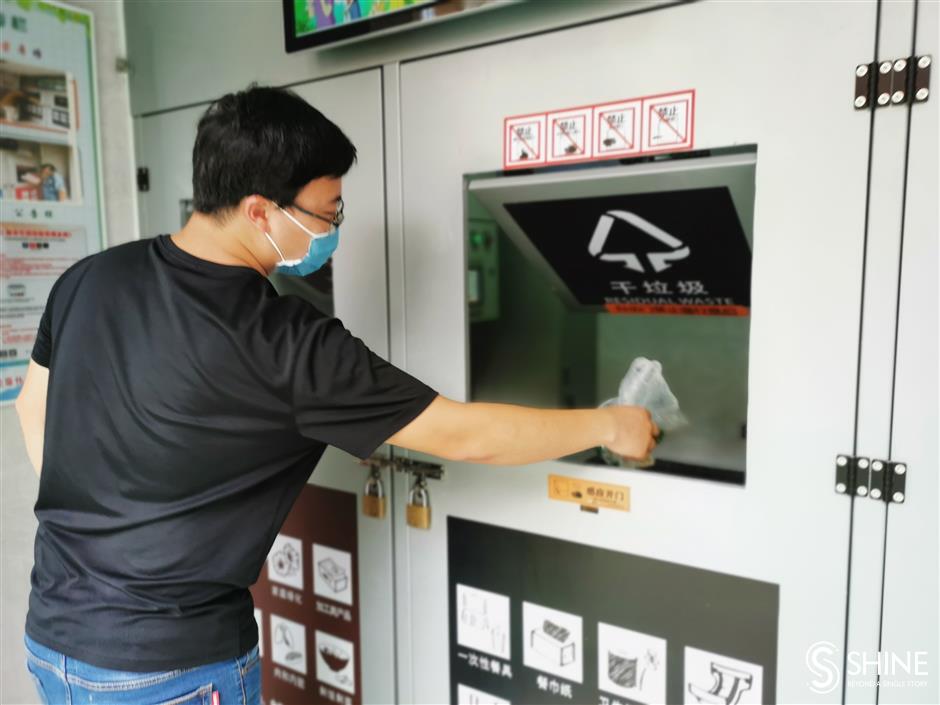 A resident sorts trash at a garbage-sorting facility in the Yunfang residential complex in Hongkou District on Wednesday.

At the Yunfang residential complex in Hongkou District, residents no longer have to step on a pedal to open garbage bins since June this year, and they can now sort their garbage at any time instead of during fixed hours.

This is the result of technology upgrades across the city to make garbage sorting more convenient and for the government to more efficiently manage the city's waste.

At the Yunfang complex, when Shanghai Daily visited on Wednesday, the garbage bins were tucked in a closed space with windows that automatically open for garbage sorters.

Inside, a device sprays a bacteria-killing agent periodically to reduce the foul smell, and an ultraviolet light kills mosquitoes. The light is automatically turned off once sanitation workers go inside to dump the garbage into their vehicles.

Under each garbage tank there is a smart scale which records each garbage deposit. The time and weight of the garbage sorted are displayed on a screen on the front of the sorting facility.

An artificial intelligence camera which monitors the garbage-sorting area captures people who leave their garbage on the ground and informs community cleaning workers of the illegal act.

Zhang Bo, information technology director at Shanghai Chi4Rec Environmental Technology Co, which offers the solution, said the real-time data transfer is enabled by 5G technology, and this technology will later be applied to more applications.

“We’re now developing a high-speed camera which watches overall garbage dumped by residents into the bins. Once there is a bottle or a piece of napkin in the kitchen waste bin, people backstage will be informed immediately,” he said.

Zhang said one such facility costs about 100,000 yuan (US$14,140), including the cost of installation and smart devices, while previously the earliest similar facilities in Shanghai cost about 400,000 yuan each. 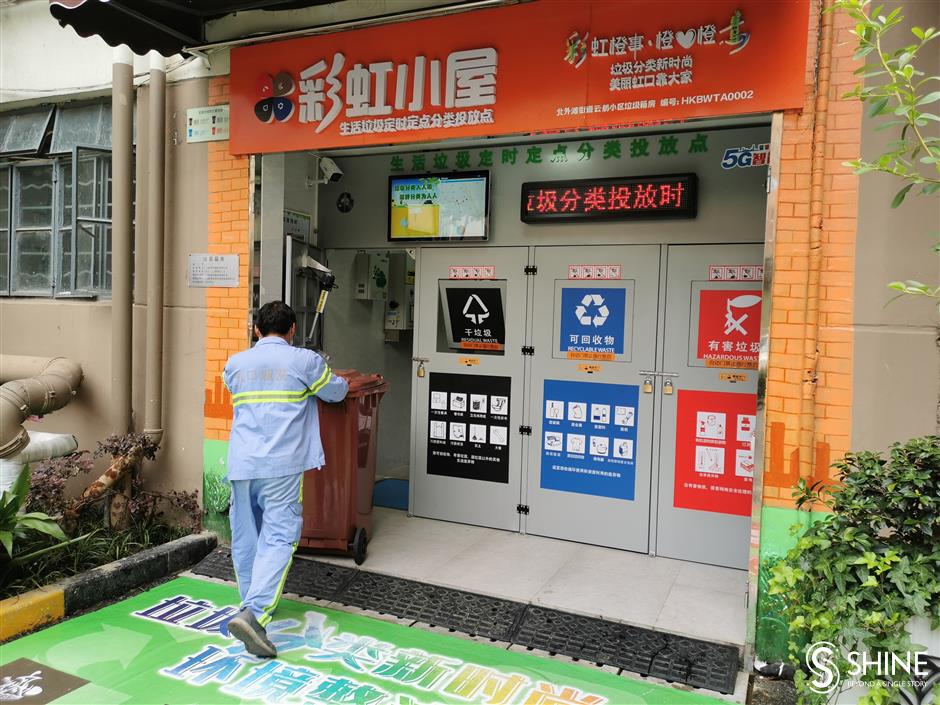 A sanitation worker rolls a garbage bin back into place after dumping its content into his vehicle.

There are four such garbage-sorting facilities in this residential complex, and the bill for their construction is footed by the Beiwaitan (North Bund) Subdistrict which governs this area. Zhang said their products in other residential complexes are also funded by the government.

Zhang said officials support such smart facilities because they’re in need of data for the eventual pricing on household waste.

Xu Liping, general engineer at SGIDI Engineering Consulting Group Co and a member of the committee for urban construction and environment protection of the Shanghai People’s Congress, said technological upgrading of community garbage-sorting facilities is inevitable and the government should support it.

They should also improve the city’s business environment for smaller businesses to encourage the endeavor, Xu added.

“Residents who feel beneficial from such facilities will be more willing to support garbage-sorting measures, and trials of new technologies are important for the government to choose the best products for eventual larger-scale purchase,” she said, adding that the government should also take into account the cost of maintenance and upgrading of such facilities.

Cui Minghua, a member of the standing committee of the Shanghai People’s Congress and director of the committee of urban construction and environment protection, said inspections by legislators in the past 12 months showed overall satisfying results of the enforcement of the garbage-sorting rules, despite some setbacks during the novel coronavirus epidemic, and the city has been building up its capacity of the terminal treatment of garbage.

“We believe that the city’s goal to bury no waste in the ground will soon be realized,” he said.