Bringing kids up to speed on traditional medicine 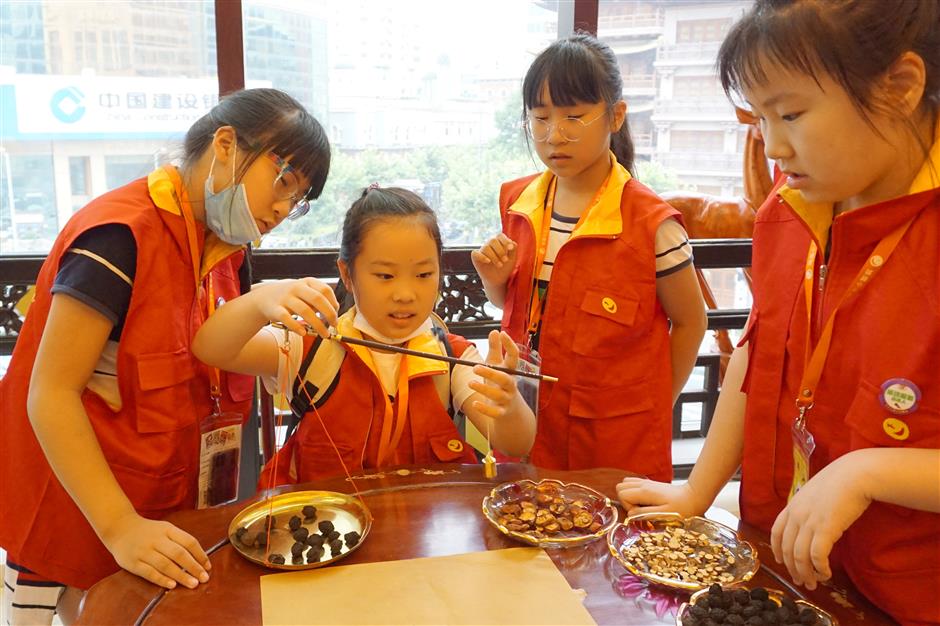 Traditional Chinese medicine has a history that dates back centuries. Today, the old tradition is once again in the limelight as TCM plays an important role in the fight against the novel coronavirus outbreak.

Over the summer, Jing’an-based TCM pharmacy chain Lei Yun Shang invited local children to its flagship store at the corner of Huashan and Yuyuan roads to experience the charm of TCM.

One of the top four TCM pharmacies in Shanghai, Lei Yun Shang originated in Suzhou. It was originally called Lei Song Fen Tang when it was founded in 1662.

After well-known doctor/pharmacist Lei Yunshang took over the familyowned business in 1734, people started to call his pharmacy Lei Yun Shang, according to archives.

Lei’s descendants fled to Shanghai in the mid-19th century and later expanded the business to other districts.

Now, the flagship store sells traditional medicines, herbs and other health-care products on its first and second floors.

On the third floor is a clinic that harks back to the pharmacy’s roots. Its decor is in the style of a classical Chinese garden, featuring pillars, corridors, carved beams, wooden ornaments and antique furniture. To fill prescriptions, pharmacists select herbs from jars lining long shelves that are weighed and wrapped in paper.

Children invited to visit the store began their tour on the third floor to learn the basics of TCM and Lei Yung Shang.

They then took part in interactive activities such as making wumei tang, a sweet and sour summer drink consisting of dried plum, hawthorn and other herbs.

They also learned how to make xiangnang, or sachets, which, filled with fragrant herbs and medicinal powders, were worn by ancient people as clothing accessories. Today, they are more likely to be hung as household decorations, emitting an aroma that helps repel insects.

Sachets are one of Lei Yun Shang’s signature products. The shop’s sachets were part of the official gift package given to trade ministers at the G20 meeting in Shanghai four years ago.

Designed often in the shapes of calabash and lotus, sachets are a symbol of traditional Chinese culture and long-lasting friendship.

“We have a responsibility to tell good stories about our TCM culture and bring children closer to our tradition,” said Bian Xiaoping, Lei Yun Shang’s deputy general manager.