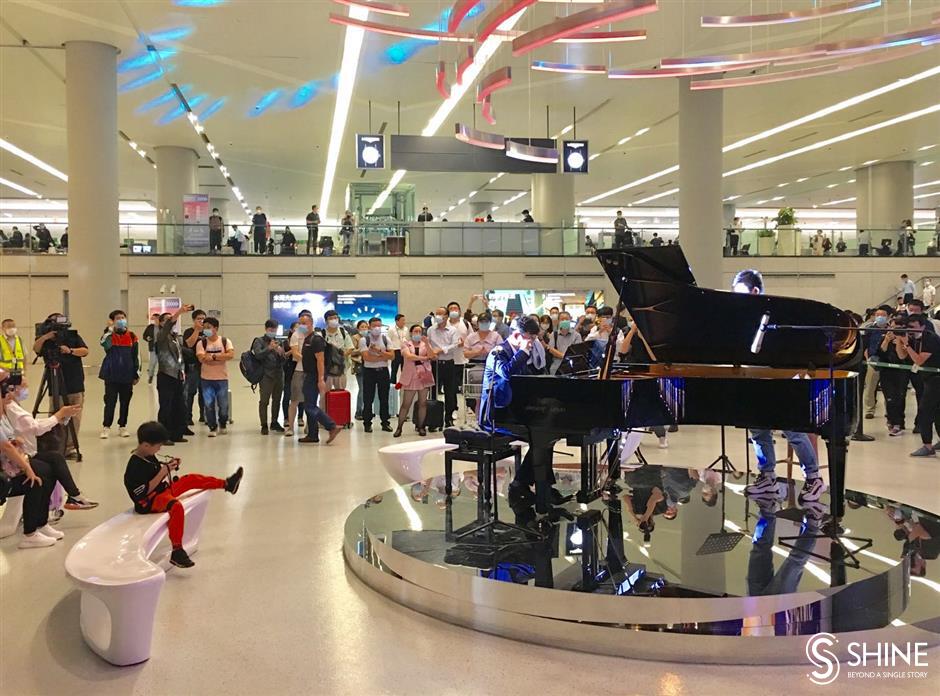 A piano and erhu concert is held at the T2 terminal at the Hongqiao airport on Sunday night.

Shanghai's Hongqiao International Airport has enhanced COVID-19 prevention measures to prepare for the large number of travelers expected over the long holiday of the National Day and Mid-Autumn Festival.

As the novel coronavirus pandemic wanes in China, passenger numbers and volumes of domestic flights at Hongqiao airport have been restored to normal levels. The passengers’ turnover is expected to be even higher during the coming holiday.

The airport is expected to receive 120,000 daily travelers during the 8-day holiday which will start on Thursday, the biggest volume since the outbreak of the coronavirus pandemic early this year, said Tang Yichen, the manager on duty at the airport’s operation headquarters.

Some 130,000 arriving and departing passengers are predicted on the peak days. 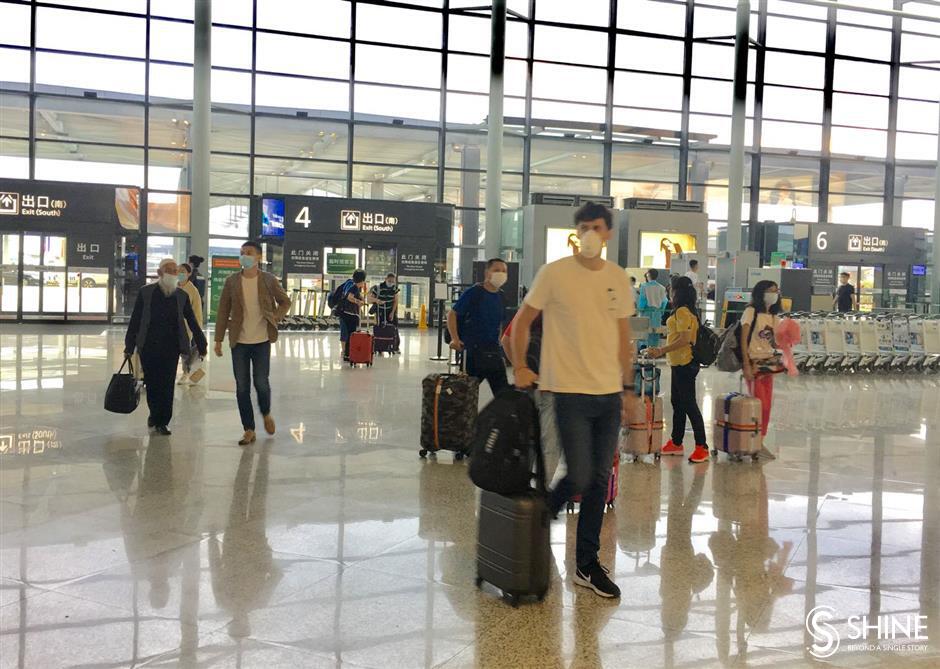 Travelers arrive at the T2 terminal of Hongqiao airport.

The most popular destinations include Kunming in southwest Yunnan, Chongqing, Sanya in south Hainan Island and Chengdu in northwest Sichuan, he added.

Shanghai is expected to be one of the top choices for tourists from other provinces during the coming holiday, further boosting the volume at Hongqiao airport, he said.

The airport authority has stipulated that all those entering the terminals must wear masks and have their temperatures checked.

Each trolley will be sterilized with ultraviolet light and washed with high pressure water cannons. Disinfection wipes and first-aid material has been prepared at the departure halls at both terminals.

To cope with the increasing number of travelers, the airport has enhanced communications with airlines to open enough security check channels during rush hours to reduce the waiting periods. 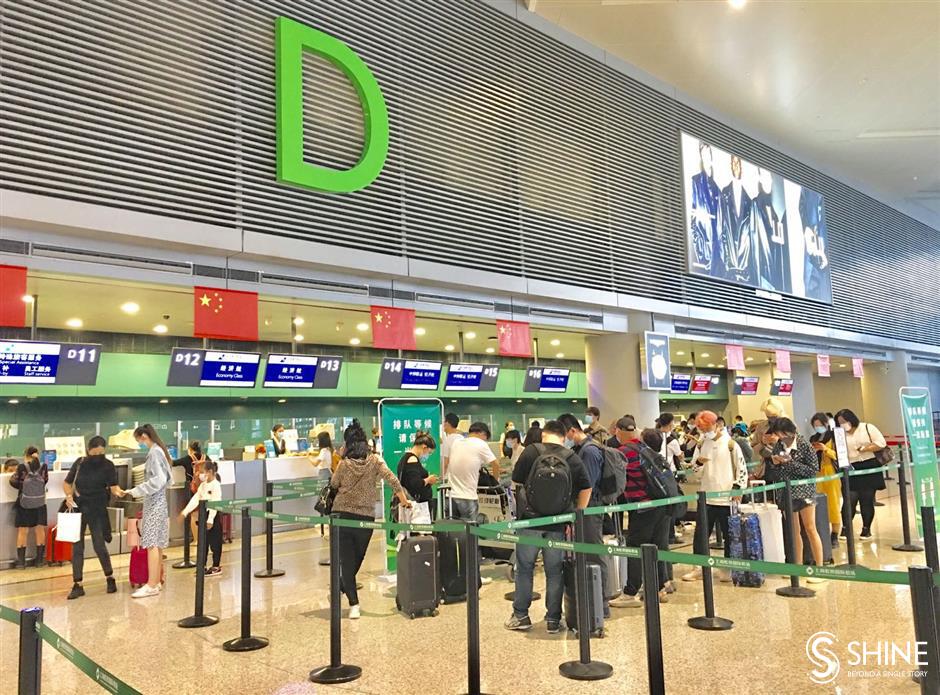 A line of passengers wait at the ticket counters.

Additional cabs will be dispatched to pick up the extra arriving passengers on time, while the Metro operator will also extend the operations of the subway lines based on the number of landing flights.

The airport has also prepared various art performances and concerts to entertain passengers during the festival.

The first concert of its kind was held at the T2 terminal’s boarding hall on Sunday evening. Musicians played the traditional Chinese musical instruments such as erhu, as well as piano. Traditional Chinese dances and cheongsam fashion shows will be staged.

More than 10 of the city’s time-honored food brands began selling various mooncakes for the Mid-Autumn Festival. The historical brand Wangjiasha is cooking mooncakes with a stuffing of meat, egg and meat floss, rose and bean paste as well as various nuts at T2 terminal. 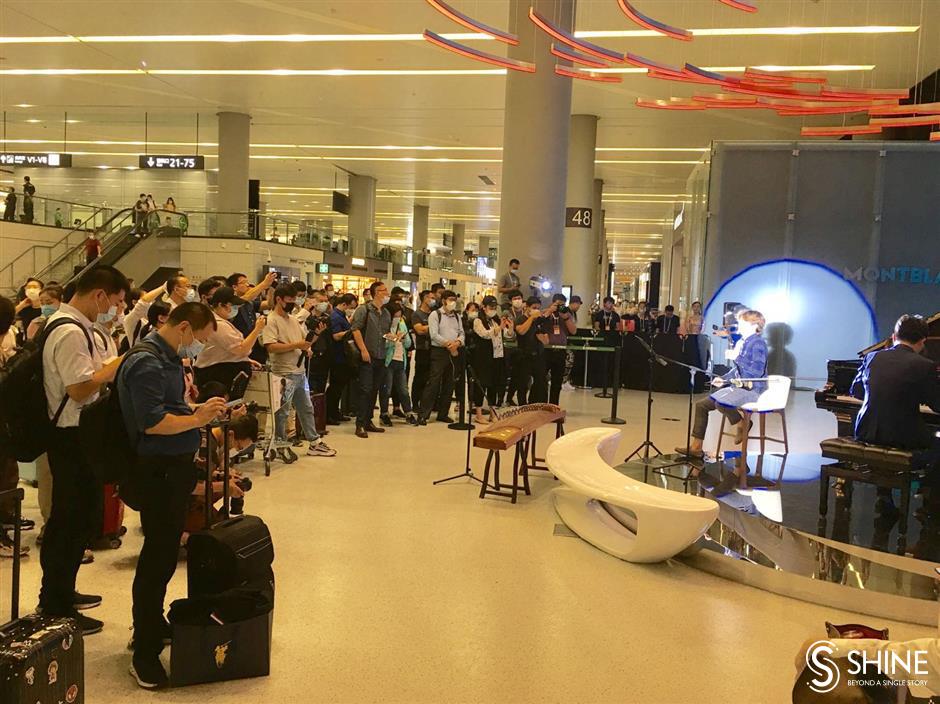 Passengers take photos of the concert.