Wheels in motion for Giro's Ride Like a Pro race 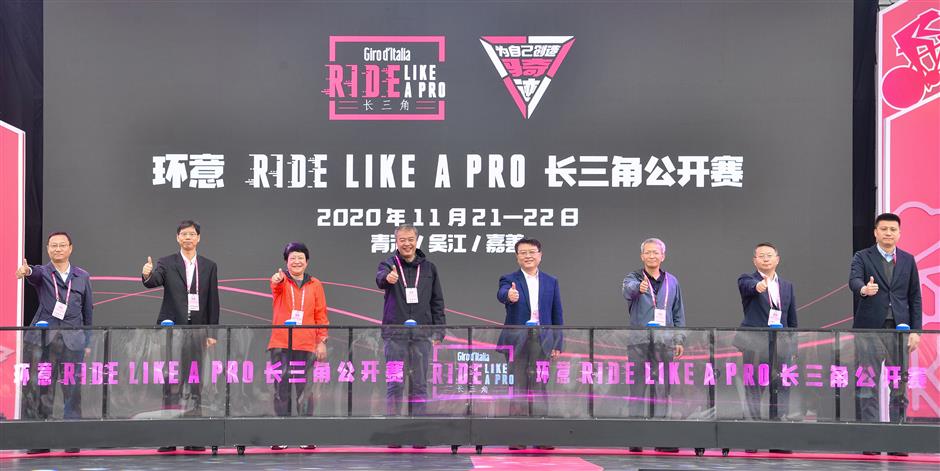 A cycle race in the Yangtze River Delta Ecology and Greenery Integration Demonstration Zone on Saturday saw amateurs and professionals from home and abroad enjoy both the fun of the event and the beautiful landscape.

The "Ride Like a Pro," managed by Giro d'Italia, Italy's equivalent of the Tour de France, took place on Dianshan Lake Avenue.

"It is my first experience in the event and I am very excited," said James Zhang, who has been participating in various cycling races over the past 10-plus years.

"I like cycling and once cycled from Harbin, my hometown, to Shanghai. The event is well organized with road closures and strict epidemic prevention measures, and the road signs are clear."

"The cycling facilities in Shanghai are the best with many cycling tracks in place, and the city is beautiful and suitable for cycling in all seasons." 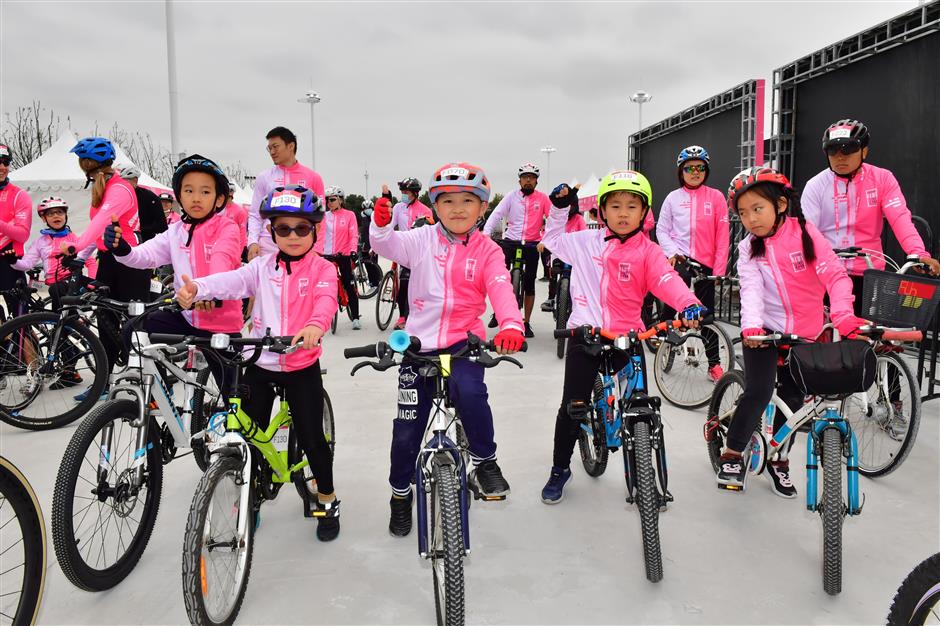 Children are keen to take part.

"I love cycling and the organization of the race is very good," said Jacek Philipiak, from Germany, who has been in Shanghai for four years. He also participated in last year's event and will race both days this year.

His wife also raced in the event on Saturday, but will miss Sunday because all slots were occupied when she made application, said Philipiak.

It is the first big sports event in the demonstration zone since it was established late last year.

"The race fuels the integration of the delta region and accelerates the coordination of the regional sports industry," said Sun Ting, deputy director of Qingpu District.

The circuit has been extended to cover Wujiang District in Jiangsu Province and Jiashan County in Zhejiang Province, reaching 89 kilometers from the previous 70 kilometers, on Sunday, the second day of the race. 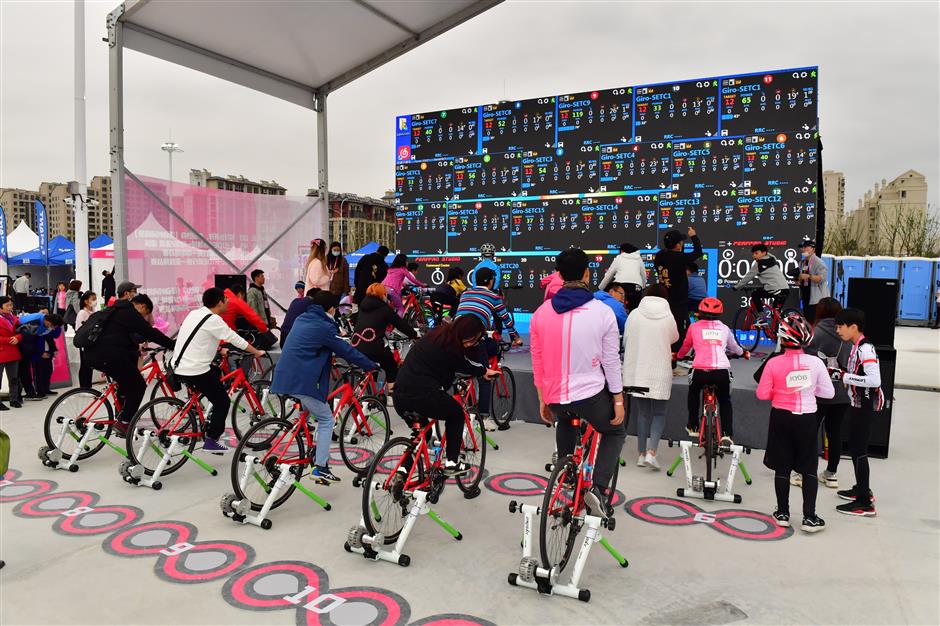 Cyclists warm up for the event.

Top-class Chinese riders will race on the second day, passing by Qingpu's Zhujiajiao and Jinze water towns, as well as attractions in Jiashan and Wujiang.

"The circuit crosses about 20 rivers in the demonstration zone, which features a sound ecological environment and beautiful Jiangnan water town scenery," said Chen Jianzhong, deputy director of the executive committee of the zone. "The integrated development of cultural, tourism, and sports industry in the zone will be further promoted."

Strict pandemic prevention and control measures have been taken and all participants have undergone nucleic acid testing, organizers said.

Performances, food and games are also part of the racing event.

The event is being hosted by the executive committee of the zone, Shanghai Administration of Sports and the governments of Qingpu, Wujiang and Jiashan. 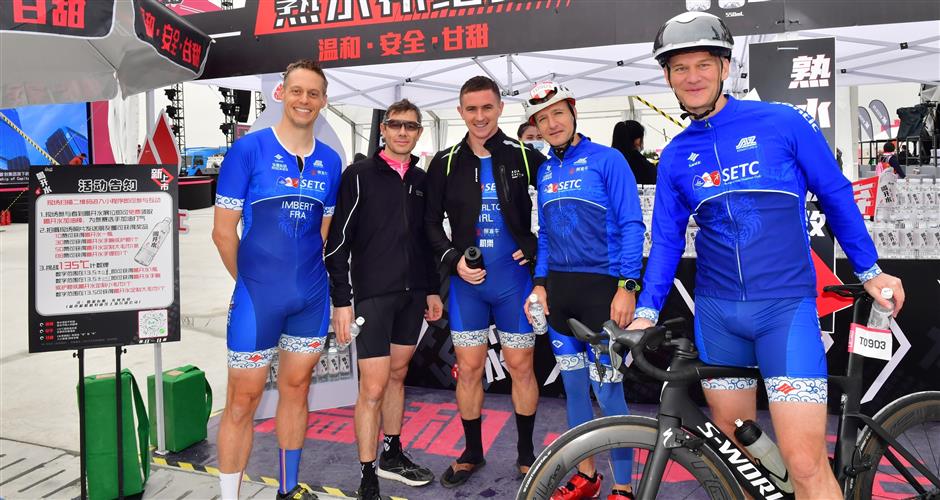 Foreign cyclists pose for the event. 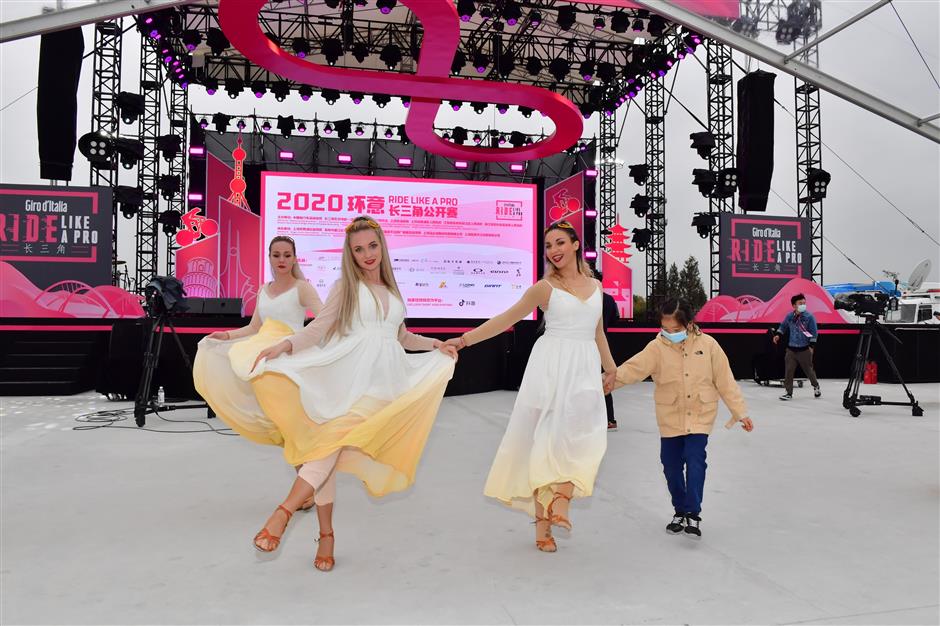 A local joins in a foreign dance performance.