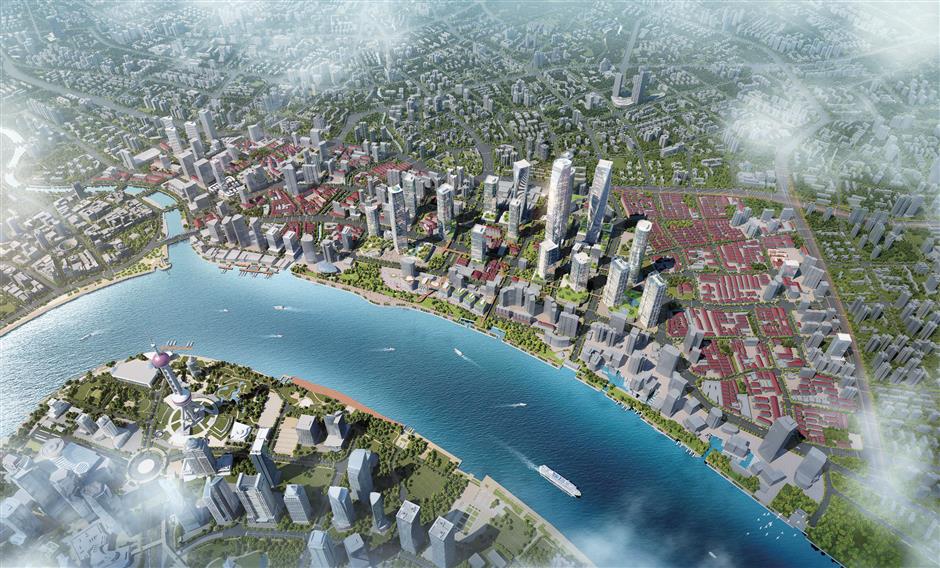 The North Bund in Hongkou District has unveiled a blueprint to develop a world-class smart transport system to compliment the region’s illustrious central business district.

Commuters are expected to get to the city’s suburb, including Shanghai East Railway Station and Pudong International Airport, within 90 minutes, and the new towns on the city’s outskirts within two hours from the North Bund.

But that’s not all. The North Bund waterfront along the Huangpu River is set to become a world-class riverside ecological space featuring international communities, car-free pedestrian zones and preserved historical buildings.

The area in the south part of Hongkou covers about 4 square kilometers, including 3.3 square kilometers of land regions, within Henan Road N., Haining-Zhoujiazui Road, Dalian Road, as well as the Huangpu River and Suzhou Creek.

The future planning on the region is focusing on building “a compound and compact, open and sharing, inclusive and mutually beneficial and innovative wisdom.”

The transport commission of Hongkou wants citizens and tourists to be able to locate a subway station within 600 meters, or a bus station within 300 meters’ walk, no matter where they are in the riverside region.

Smart parking, public transport and roads will be developed across the riverside region. It will have a public parking electronic payment and guidance system. More than 80 percent of the bus station facilities will be able to collect data, manage the traffic and publicize information, thanks to intelligent technologies.

In future, it will be convenient for people to get to the Lujiazui financial hub, the former World Expo site, Qiantan area and Pudong International Airport in the Pudong New Area from the North Bund, via multiple Metro lines operating through the area.

Three Metro lines — 4, 10 and 12 — are already running beneath the North Bund, while a new one, the Line 19, will extend to the waterfront in the near future.

The current public bus network will be optimized to serve as a convenient supplement to subway lines.

The future bus network will include the artery, regional, shuttle and characteristic lines.

The waterfront will have a slow transport system to serve pedestrians. The blueprint reveals car-free zones will be developed in the region as a pilot scheme to get promoted across other riverside regions of the city.

Skywalks will connect public transport stations, main office buildings and sightseeing platforms. An underground space is to be developed beneath the core region of the North Bund. The skywalk, ground and underground paths will create a safe, connected, convenient and comfortable “slow walking zone.”

In the future, the transport development of the North Bund will meet the demands of citizens and tourists, and allow people working and living there to travel conveniently and comfortably.

The riverside region was the city’s earliest harbor for both cargo and passenger transportation. The British East India Company built the first cargo dock at Xujiatan beach, near what is now the North Bund in 1845.

When workers loaded cargo in the 1950s, the sirens of ships could be heard from far away. It served as a major cargo transport hub until the 1990s when other major ports were developed in the city’s Pudong New Area and northern Baoshan District.

The blueprint reveals that the riverside business district will involve more life and recreation elements with more convenient transport.

It will focus on the ecological environment and develop more public space for the residents and tourists.

Highlighted historical structures include the Shanghai Postal Building, the Baroque-style structure that was built in 1924. It has a bell tower on top and hosts the Shanghai Jewish Refugees Museum with the historic Ohel Moishe Synagogue inside.

Smart technologies, especially the intelligent transport system, will be widely applied in the region, which is being developed into a hub for applications of 5G technologies.

Hongkou is striving to become the world’s first district to be covered with 5G connectivity and broadband network.

Supported by smart transport, the riverside region will focus on the shipping and finance sectors, with additional office buildings for multinational headquarters.

It will develop supplementary businesses such as exhibition, education, culture, hotel and life services.

An international community to accommodate 70,000 professionals will be built along the river, with sports and recreation, health and medical, and education facilities to serve residents.

As a highlight, the “slow walking zone” will cover 500,000 square meters. Half of the zone will be vehicle-free to allow citizens enjoy the communities and public space in the heart of the business district.

Planners have fully researched the global urban planning experiences and practices in London, New York and Tokyo to make the master plan work, the bureau revealed.