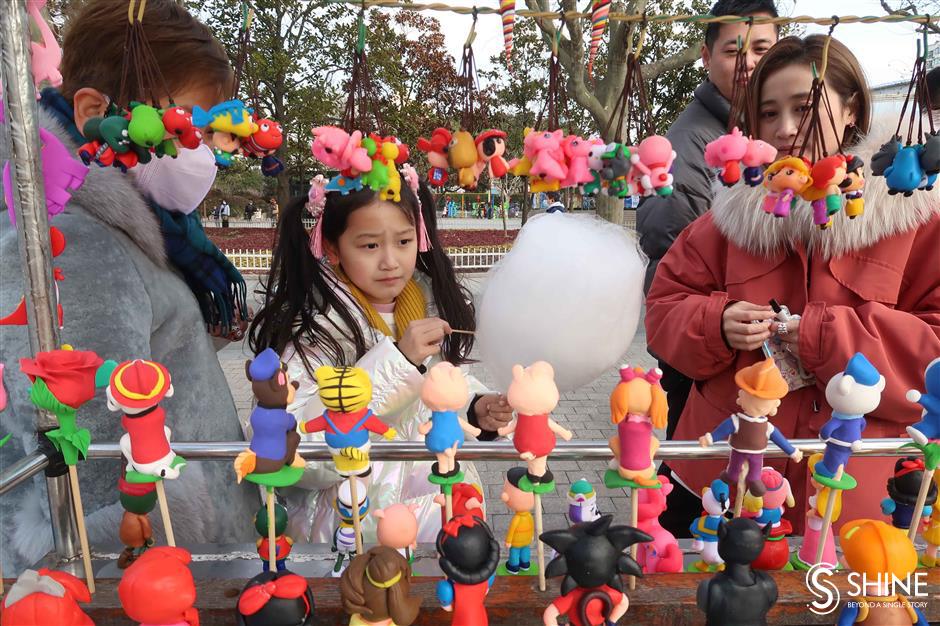 Plenty of choice for this girl enjoying a holiday outing. 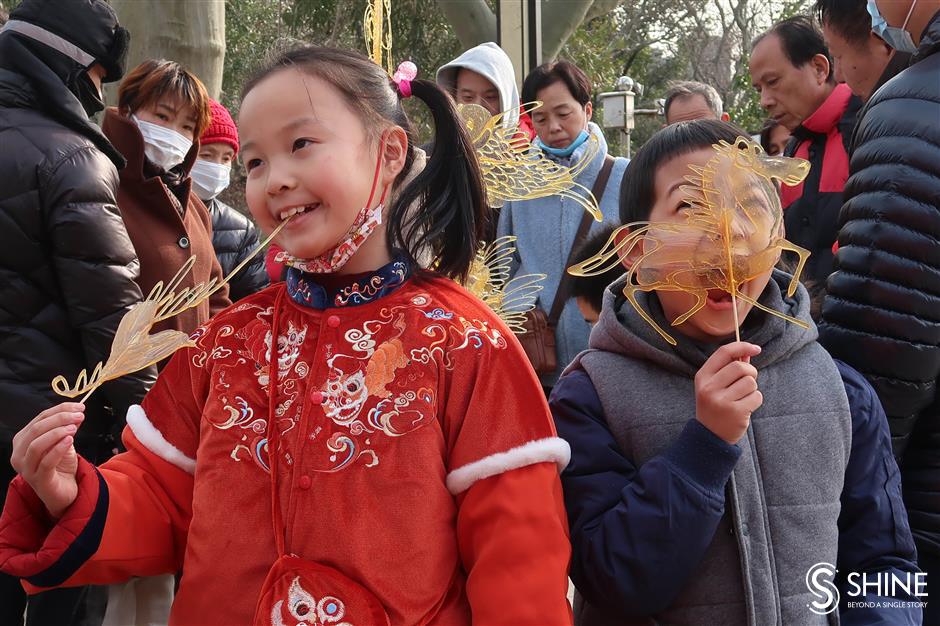 Sweet treats for these children during the holiday.

Shanghai's tourism market enjoyed a new momentum under the staycation trend during the Spring Festival holiday as it recorded a combined 4.92 million visits over the seven days, 96 percent of 2019's number.

Among them, 81.55 percent were contributed by those staying in Shanghai, according to the Shanghai Administration of Culture and Tourism.

The city reaped a total tourism revenue of 5.665 billion yuan (US$878 million) during the holiday.

The average occupancy rate of hotels across the city was 90 percent of that in 2019, the administration said.

A hundred micro tour routes, 100 performances and 100 exhibitions were arranged during the holiday for locals and those staying in the city experience Shanghai's splendor, said Cheng Meihong, deputy director of the administration.

They have brought a fresh look and injected new impetus into the city's culture and tourism market with a strong festive flavor, online and offline interaction, combination of culture, tourism and business and accurate pandemic prevention measures, she said. 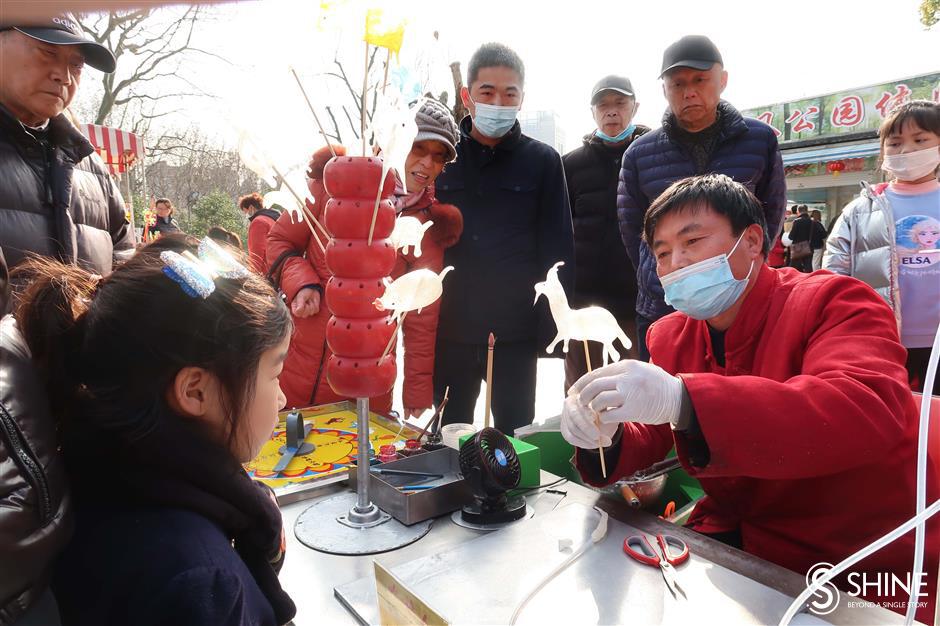 A little girl enjoys watching a crafstman at work.

Outdoor sites such as the Bund, the Yuyuan Garden area and Lujiazui had 1.14 million, 370,300 and 1.07 million visits during the holiday respectively, according to the administration.

The occupancy rate of hotels in the city's suburbs surged with those in Jinshan, Songjiang, Qingpu, Fengxian and Chongming districts recording an occupancy rate of over 50 percent, a more than 20 percent rise from 2019, according to the administration.

The staycation trend also benefited the city's entertainment market with venues such as KTVs recording a visitor and revenue increase of 20 percent and 42 percent respectively compared with that in 2019, the administration said.

The revenue of gaming venues rose 16.6 percent, it said.

Cultural venues in the city recorded 1.32 million visits during the holiday, and online cultural and tourism activities had 125 million viewings in total. 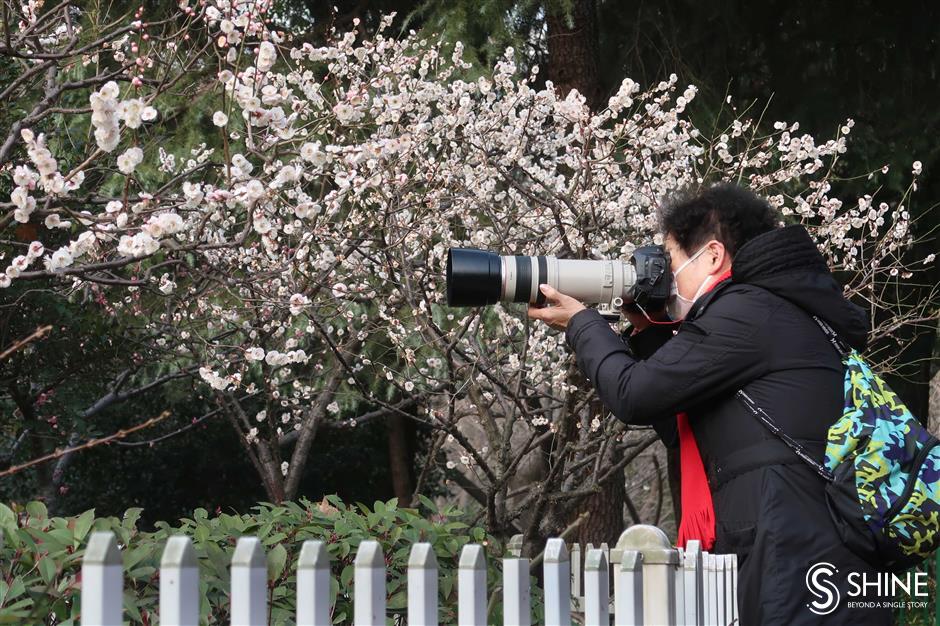 A photographer takes pictures on the last day of the holiday.

"I planned to book three nights but Valentine's Day was fully reserved," she said.

"Unable to travel elsewhere, we still need a sense of ritual during the important holiday," she said .

Zhang also spent the holiday with relatives at KTV, watching films and playing board games.

"It is a plentiful holiday as I found I only have one day at home with the rest visiting relatives and attending various activities," she added. "It is another way of celebration, which makes me happy."

Lu Xinyi, a native of Hebei Province, stayed in the city during the holiday. She had a cycling tour at the riverfront area of Huangpu River with her friends and visited the Zhujiajiao watertown.

"I have been in Shanghai for four years, but I have never been to the ancient town," said Lu. "I felt the festive atmosphere there and the riverfront area is also beautiful.

"My parents supported my decision of not returning home, and I will cook a feast for them when I return in early March to make up for the regret of not being back during the holiday," she said.

Red tourism venues such as Shanghai Longhua Martyr Cemetery and Chen Yun Memorial were popular during the holiday as this year marks the 100th anniversary of the founding of the Communist Party of China, the administration said.

Watertowns such as Fengjing and Zhujiajiao hosted festive celebration activities such as lantern shows.

During the holiday, 2,266 cultural and tourism businesses in the city were inspected, and 133 safety-related and pandemic prevention and control irregularities fixed, the administration said. 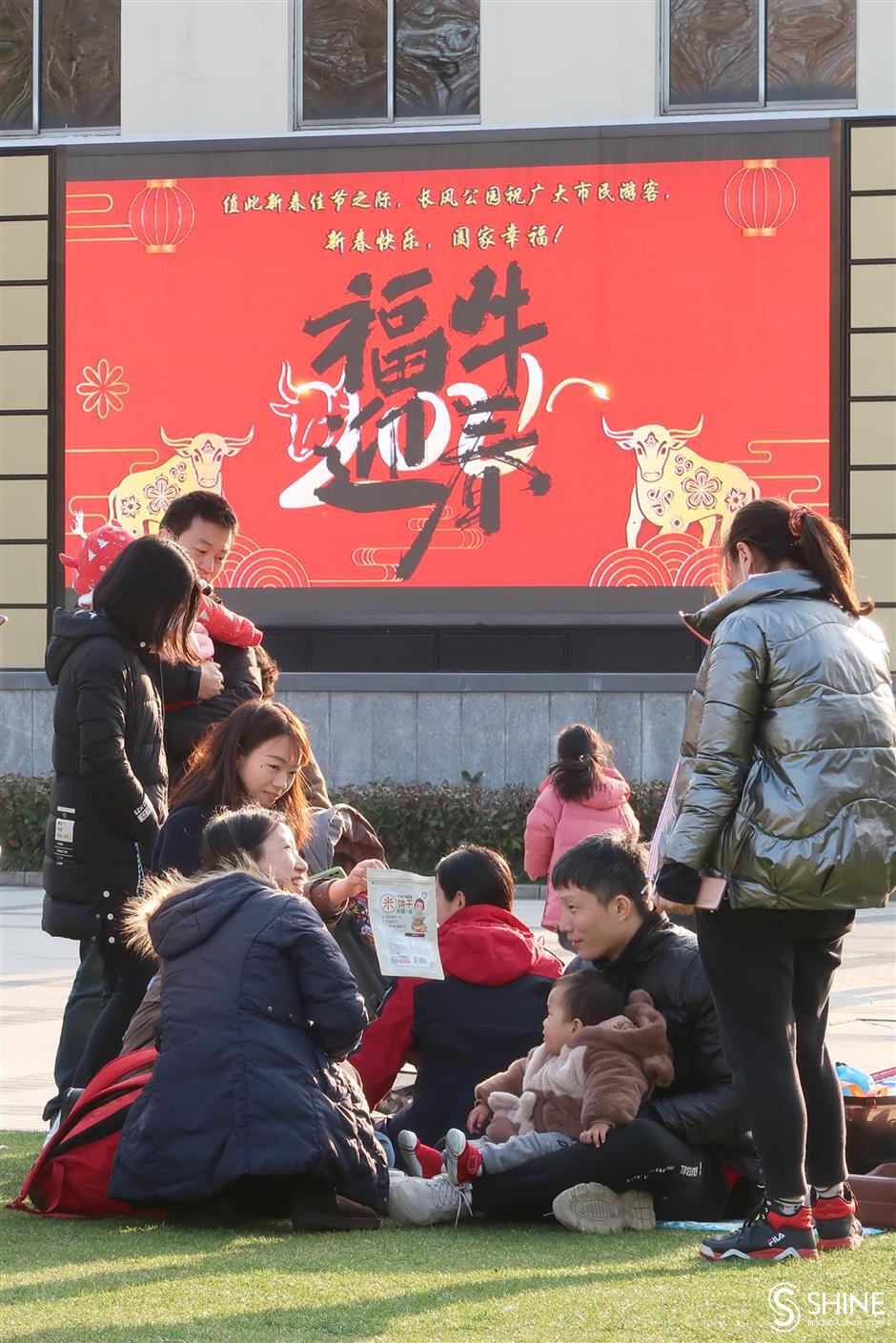 A family enjoys their day out in the sun.

Bookings for tourist attractions surged over 50 percent during the holiday compared with 2019 and Shanghai, Beijing, Suzhou, Guangzhou, and Shenzhen were the cities witnessing the largest number of bookings to their scenic spots, Shanghai-based online travel operator Trip.com said on Wednesday.

To encourage people to stay put for the holiday, a number of ticketing preferential policies were launched at scenic spots, it said.

Online travel operator Tongcheng-Elong said rural tourism and tours featuring folk tradition and customs experiences were popular during the holiday, and some tourist attractions such as the Humble Administrator's Garden in Suzhou were fully booked during the holiday.

Ancient towns such as Jinze, Zhujiajiao, Liantang and Fengjing, Chongming Island, and Haichang Ocean Park were popular destinations in Shanghai, it said.

Alibaba's travel site Fliggy said a local tourism boom was seen during the holiday with an over 660-percent surge in relevant bookings compared with last year.

Bookings for luxury hotels soared more than 160 percent while their room prices rose 33 percent. A large number of bookings were from local residents, it said. 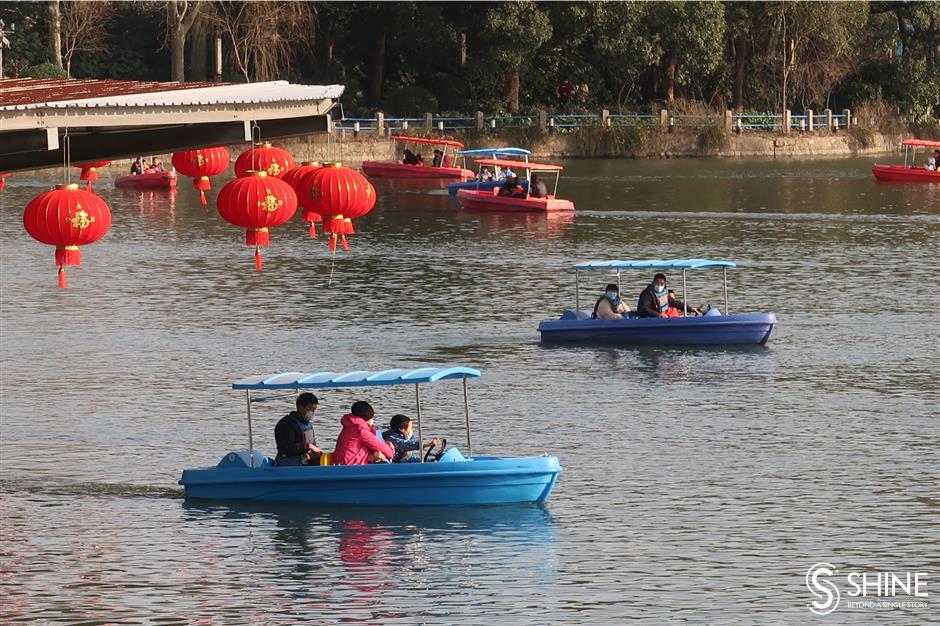 Fun on the water during the holiday. 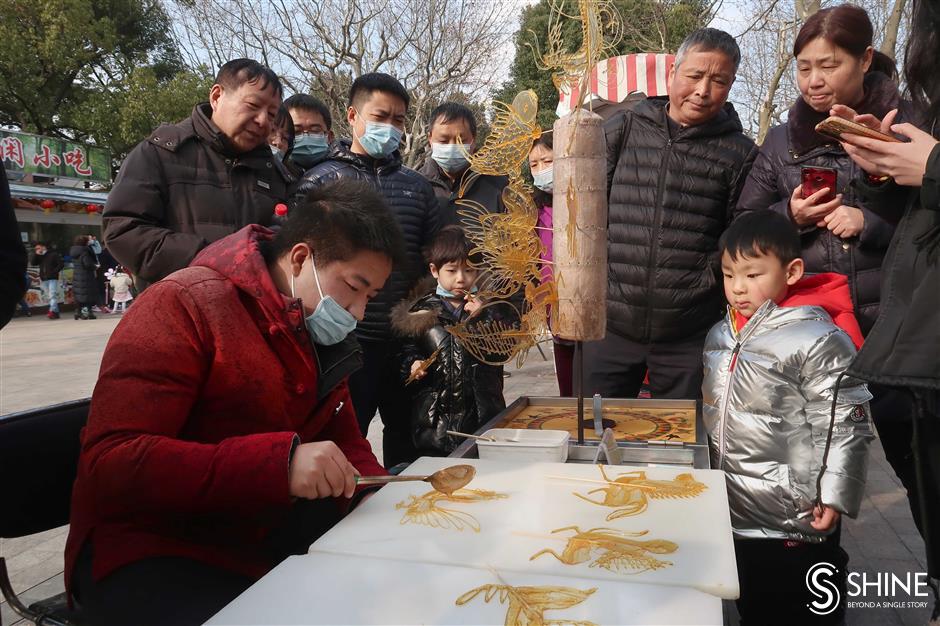 Anticipation is written all over the face of one little boy on the last day of the holiday.

The peak of bookings was on the fourth day of the holiday, Valentine's Day, and film-themed, eSports, villas and minsu (B&Bs) that allow pets were the most popular choices with room prices almost doubling compared with last year, according to Fliggy.

Traditional destinations such as Sanya, Kunming, Lijiang and Guilin were not favored this year, while first-tier cities such as Shanghai and Beijing which used to be empty during the holiday were extremely popular tourism destinations, it said.

People born after 1995 were the majority of local tourism consumers, and the bookings of hot spring hotels and hotel buffets also witnessed a surge, it said.

The number of vehicle rental services also grew more than 180 percent during the holiday.

In-depth local tours and short-distance self-driving tours gained in popularity under the staycation trend, and tourism authorities and companies’ webcast and "cloud tourism" activities enriched people's experiences during the holiday, said Wu Ruoshan, a researcher with the Tourism Research Center of the Chinese Academy of Social Sciences.