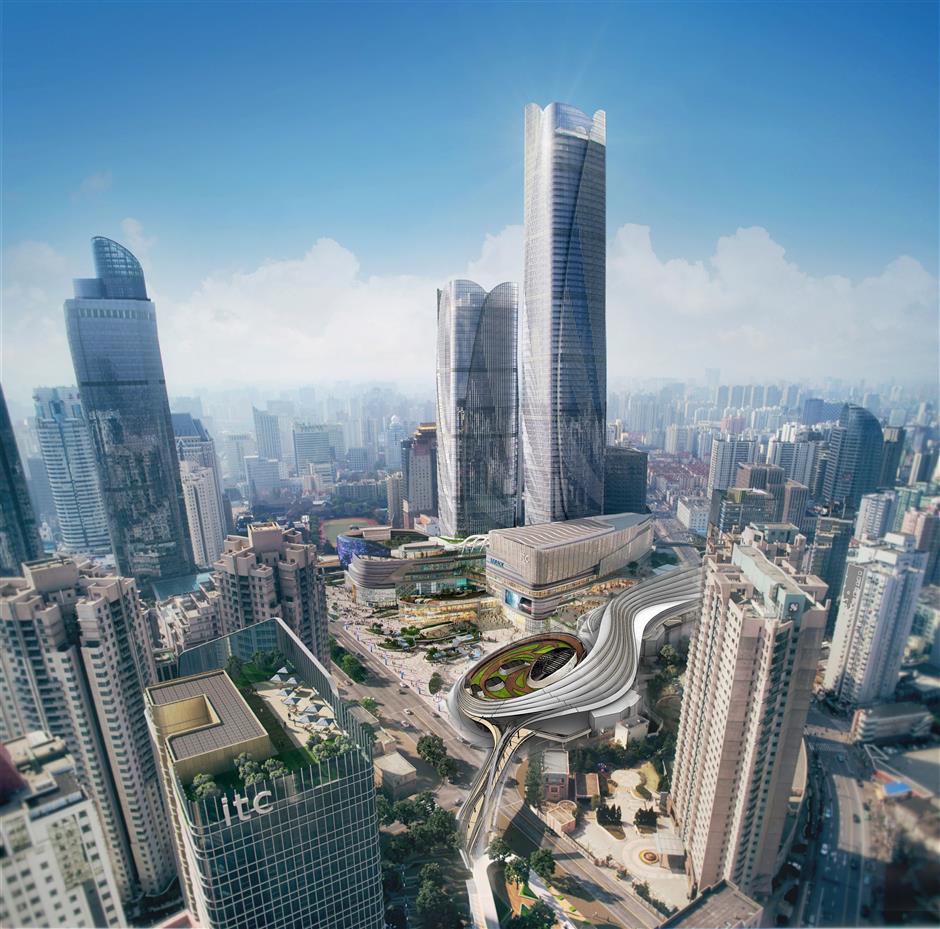 An artistic rendition of the Xujiahui Center project

A tower in Xujiahui Center will be completed by the end of 2021 and become one of the largest commercial complexes in downtown Shanghai.

The 220-meter T1 building of the project will be completed next fall and feature commercial facilities, offices and luxury hotels, the district government announced today.

The project includes the 370-meter T2 tower on Hongqiao Road that will surpass the 320-meter building in Hongkou District's Sinar Mas Plaza – also known as the White Magnolia Plaza complex – to become the tallest structure in Puxi.

When completed in 2023, the 70-story T2 tower will be the fifth tallest in the city after the 632-meter Shanghai Tower, 492-meter Shanghai World Financial Center, 468-meter Oriental Pearl TV Tower and 420.5-meter Jin Mao Tower in Pudong’s Lujiazui area.

The district government released its major construction plans for 2021 today with 59 projects totaling 160 billion yuan (US$24.8 billion) in investment that will be completed or reach major milestones this year.

The downtown district, named after Ming Dynasty (1368-1644) official and scientist Xu Guangqi, intends to become a scientific hub with a vibrant cultural scene. Future development will primarily take place along the Huangpu River – better known as the West Bund – and the Caohejing Development Zone. 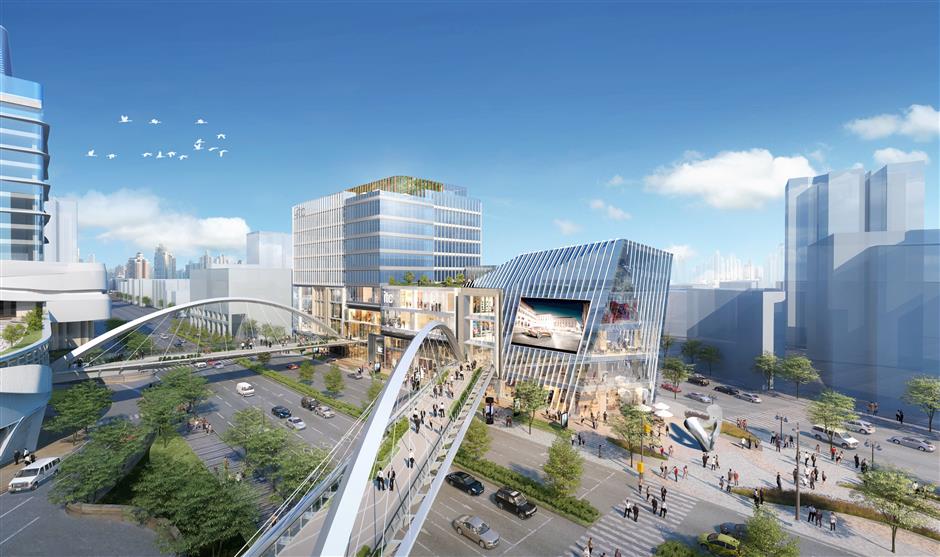 An artistic rendition of the Xujiahui Center project

Another group of key projects centered around art and artificial intelligence (AI) is being launched on the West Bund. The waterfront is home to a cluster of museums and art galleries renovated from the city's early factories.

A media harbor and AI valley will be completed by the end of the year, according to district officials.

Internet giants like Alibaba and Netease will have offices along the waterfront in addition to unicorn companies such as SenseTime and United Imaging.

Construction has begun on the West Bund Financial Hub, which will become a financial center rivaling the Bund and Lujiazui. Structural construction on one block of the project will be completed this year with total investment of 1.5 billion yuan.

The 28 projects along the Huangpu River waterfront will have total floor space of around 1.8 million square meters, including office buildings, shopping malls, hotels, exhibition halls, communities and cultural and sports facilities.

In another key project in the Caohejing area, Beiyang AI Town, covering 543,000 square meters along the Dianpu River and the city’s Outer Ring Road, will become the city's first AI town when completed around 2024. AI and big data technologies will be applied to the town’s urban information and public infrastructure as well as its public service facilities. It will serve as a demonstration area for AI applications in medicine, finance, transport, media and business.

A site in Huajing Town, formerly known for the Beiyang wharf industrial port, will preserve some of the warehouses, cranes and other industrial relics, and convert historical structures into education centers and commercial facilities. 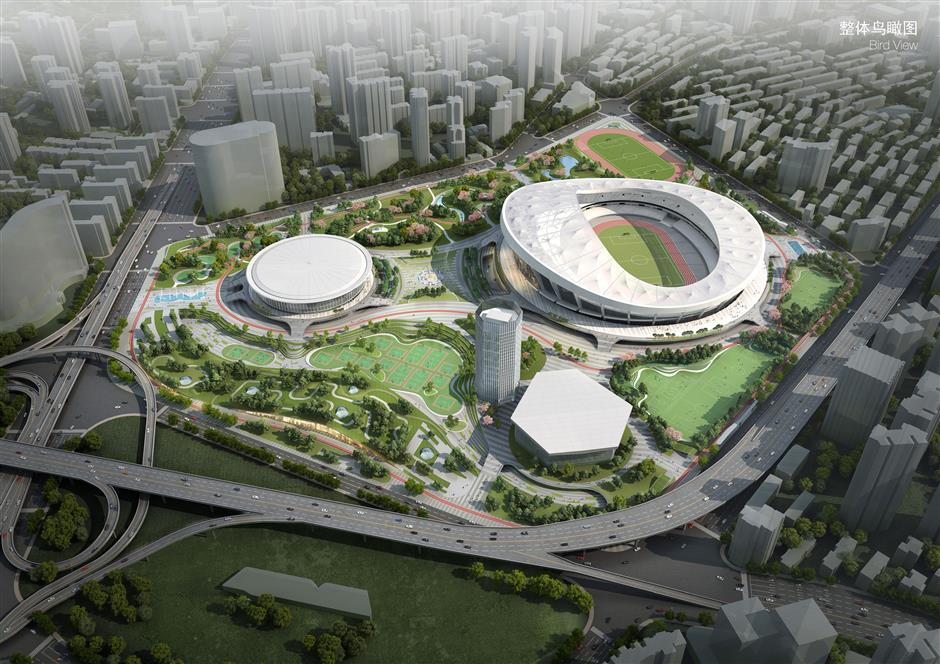 An artistic rendition of the Xujiahui Sports Park

Other projects kicking off this year include an expansion of the Cherry Blossom Boulevard, the biggest fenceless park in the downtown area. The new phase of the boulevard near Middle Ring Road with cherry blossom trees flanking the greenbelt will cover 76,000 square meters and include gardens and jogging paths.

The park will stay open round the clock and incorporate the existing stadium, gymnasium and swimming pool, along with the high-rise office building Dongya Mansion — all of which will undergo major renovations.

Shanghai Stadium, Shanghai Gymnasium and Shanghai Swimming Pool are being renovated to form an "outstanding center for sporting events, an active paradise for public sports and classic cultural landmarks," according to officials.

The Wanping Theater is being refurbished to rejuvenate traditional Chinese opera. The theater is scheduled to reopen around June and will cover 29,000 square meters, with an exterior shaped like an exquisitely carved jade sculpture and an interior inspired by traditional Chinese gardens.

The five-story theater will be configured to accommodate 1,000 people for large-scale events and 300 for smaller productions.

An artistic rendition of the new phase of Cherry Blossom Boulevard