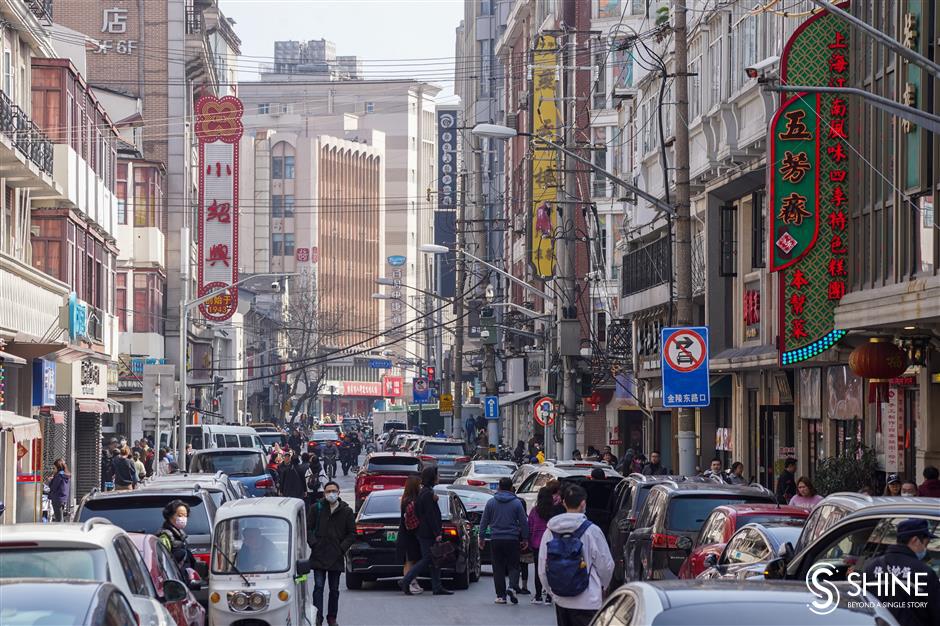 The 250-meter-long Yunnan Road S. features more than a dozen time-honored eateries from both Shanghai and other provinces.

One of Shanghai’s last remaining downtown food streets will vanish soon to make way for the ongoing urban renewal campaign.

All the popular restaurants on Yunnan Road S., including more than a dozen time-honored eateries from both Shanghai and other provinces, will close around the end of 2021.

The roadside buildings will be demolished along with nearby old residential communities for the region’s overall redevelopment.

A detailed schedule and future plan for the food street, which emerged in the 1940s, has yet to be decided, according to the Huangpu District government.

Citizens and business owners are lamenting the demise of the 250-meter-long road where visitors can taste both the city’s most authentic traditional flavors and stylish food popular on the internet in a single tour and at a low cost.

A diner at Deda Western Restaurant said he had been there twice with his wife in a week after hearing about the demolishing plan.

“I’d like to recall the taste of my childhood and take some photos for my children, who may have no chance to eat here,” said the diner surnamed Shao. 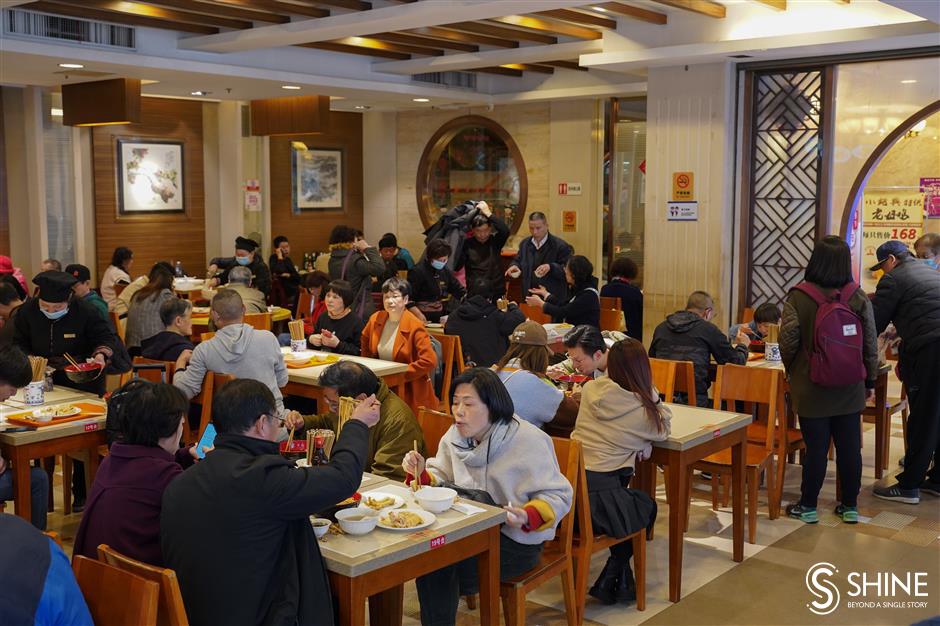 The Xiaoshaoxing restaurant is crowded on Sunday afternoon.

Deda is one of the oldest Western restaurants in Shanghai dating back to 1897. It is one of the most nostalgic venues for the older generation who had their first taste of Western food or went on their first date.

Other popular traditional brands include the 78-year-old Xiaoshaoxing which is famous for its Shanghai-style baizhanji, or sliced cold chicken, Hongchangxing, one of the most popular Muslim restaurants in the city, and Yanyunlou, a restaurant which been serving Beijing roast duck in Shanghai since 1936, as well as Wufangzhai selling zongzi, a glutinous rice dumpling wrapped in pyramid-shaped bamboo leaves.

The road near the Nanjing Road Pedestrian Mall and People’s Square will join the list of once popular downtown food streets which have disappeared amid rapid urban development.

Some of the streets, such as the Wujiang Road in Jing’an District, have been refurbished into high-end food plazas, while some others, like the Zhapu Road in Hongkou and Huanghe Road in Huangpu, have lost their attractions as an increasing number of comprehensive malls pop up across the city. 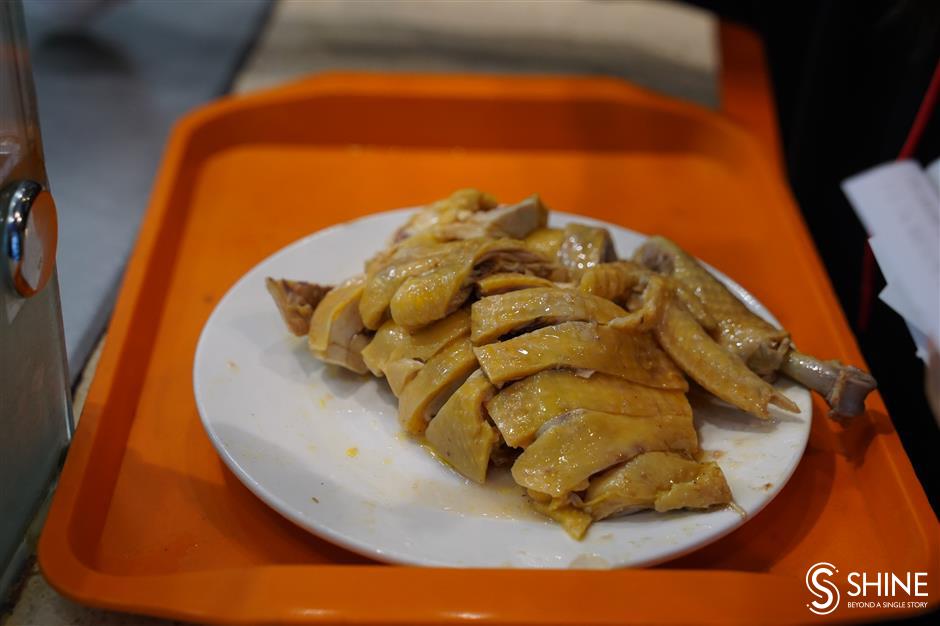 Yunnan Road S. is one of the city’s oldest food streets, which originated in the 1940s. Food stalls selling traditional Shanghai breakfast foods such as youtiao (fried dough stick), dabing (flat bread) and soybean milk attracted nearby residents living in the traditional shikumen, or stone-gate neighborhoods.

It was titled the “Great World Food Street” in 1991 when the nearby Shanghai Great World, or Dashijie, became one of the most popular entertainment venues. Restaurants selling delicacies from neighborhood provinces, such as the sliced cold chicken which originated in Shaoxing, Zhejiang Province, and boiled salted duck, a traditional food in Nanjing, Jiangsu Province, also opened their flagship stores on the street.

In its heyday, tall archways decorated with neon lights and trademarks of famous eateries stood on both sides of the road. Over 50 stalls or restaurants attracted customers day and night. Traditional Chinese operas were performed in front of the Xiaoshaoxing, Xiaojinling and Xiandelai restaurants.

It was listed as one of the city’s 10 “specialized commercial streets” in 1999 by the city’s commerce commission. The title further promoted its fame and attracted more business operators, including many unlicensed. 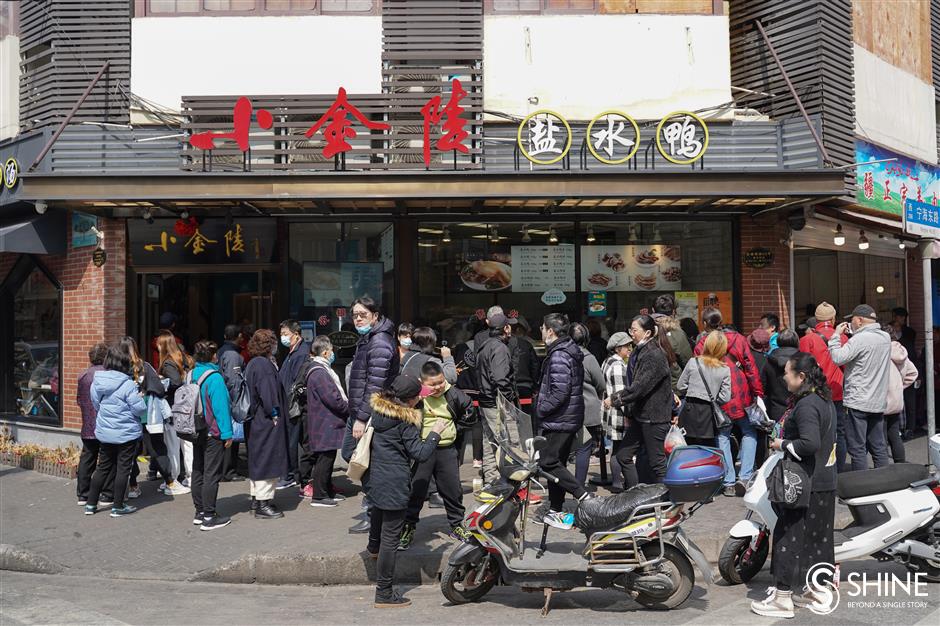 Diners line up in front of the Xiaojinling restaurant, which is famous for its salted duck.

The district government launched an eight-month renovation campaign in 2008 to remove illegal structures and businesses, while inviting additional traditional eateries such as Dahuchun, one of Shanghai's famous pan-fried, pork-stuffed shengjian mantou buns, to the street.

Even the coronavirus pandemic has barely affected the popularity of the landmark road.

The road was included in the urban renewal area of the region late last year. Some residents have moved out from their dilapidated houses and nailed the windows shut with planks. Most of the eateries on the ground floor are still operating.

Liu Xiaodong, a marketing official with the Xinghualou group, which owns a dozen of the time-honored eateries on the road, said the group is optimistic about the future.

“We hope these traditional eateries can be retained along with some characteristic architecture,” Liu said.

The group is famous for the city's time-honored mooncake brand dating back to 1851. 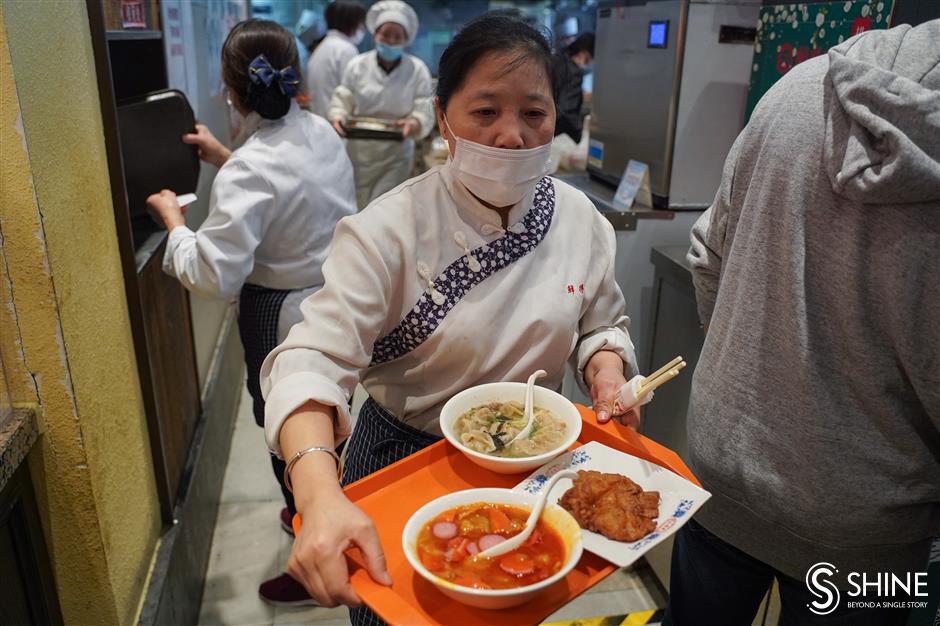 A waitress serves traditional dishes at the Xiaodelai restaurant, which is famous for its pork chop with rice cakes.

Yu Jing, general manager of Xiaoshaoxing’s flagship store on the road, recalled how the traditional restaurant and the Xiaojinling salted duck attracts long lines of customers during the Spring Festival every year.

The restaurant originated in 1943 with two wooden benches and three planks selling chicken porridge, said Yu, who joined the restaurant in the 1990s. It later expanded at the original site into the current six-story restaurant.

It still mainly serves the traditional sliced cold chicken, classic noodles with scallion oil and chicken congee. The Shanghai variation uses sanhuang chickens from Pudong, which are cooked without the marinating or curing processes.

Liu Jianhua, 56, a senior chef at Xiaoshaoxing, said he felt sad mainly because he had to say goodbye to many old customers who have been eating there for decades and become good friends.

“I can only tell them to take the last chance to come more frequently,” said Liu. His father also worked at the restaurant for decades. 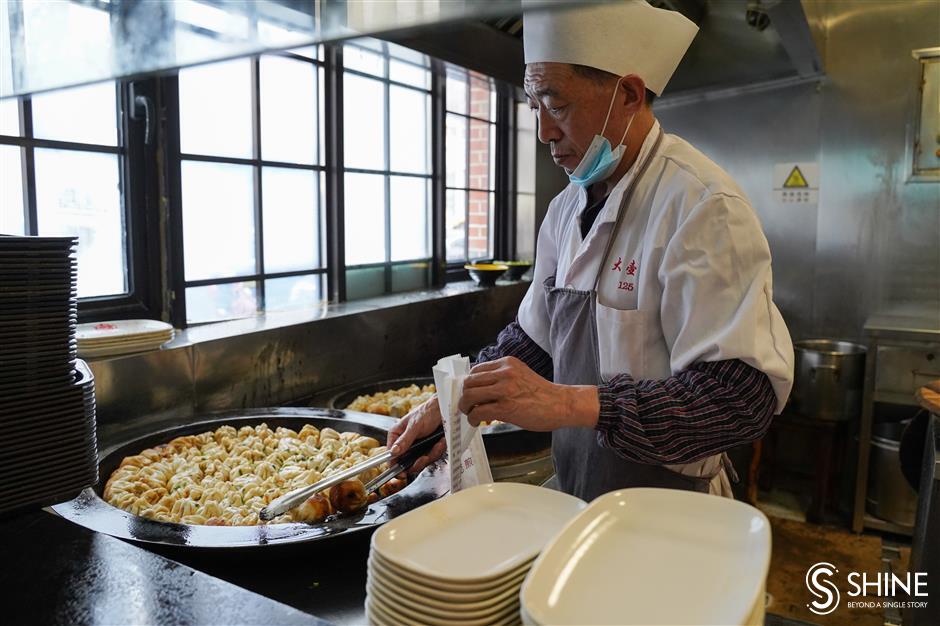 The nearby Xiaojinling, which began in 1978, attracts not only senior residents living nearby, but also office workers who have their lunch at the traditional eatery.

A Bao Fried Pork Chop is one of the online sensation venues competing with the traditional eateries on the road. It is said to sell over 1,000 fried pork chops every day.

“The business has been affected because many old customers have relocated,” said the boss of the small eatery. She plans to rent another store in the nearby region and continue the popular business.

“The place just has a special gene which is favorable to food business,” she added.

Dahuchun's shengjian mantou buns, which have no soup inside, with a thick skin and crispy base.