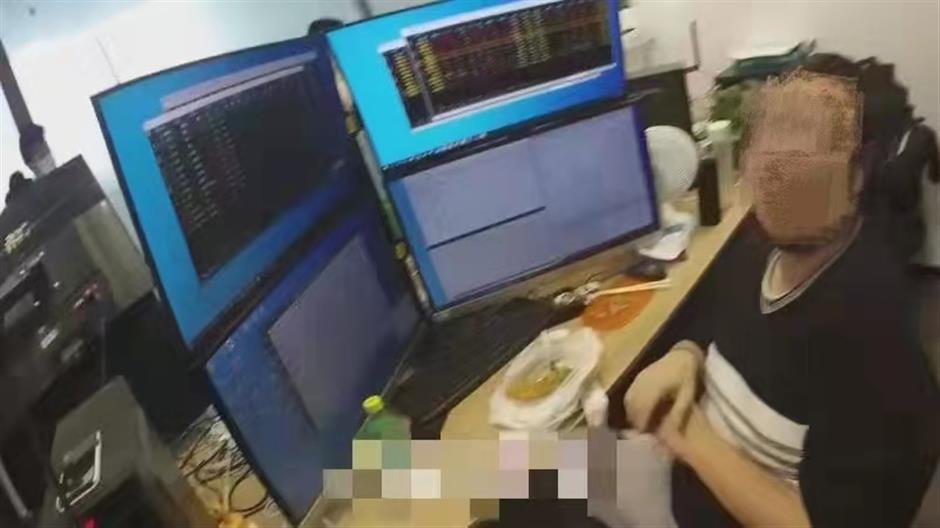 More than 30 suspects from a Shanghai-based IT company have been apprehended for allegedly producing and selling scam investment software, Shanghai police said today.

The alleged fraud is the largest of its kind broken up by Shanghai police in recent years.

Last September, a resident of Changning District surnamed Wang reported a possible scam to district police. He had joined a WeChat group where he was introduced to a suspicious mobile app for investing in foreign exchanges and futures. He invested 115,000 yuan (US$17,500) but was losing money all the time.

The investigation led to a group of people based in Anhui Province that ran the investment scheme, as well as six similar groups in Jiangxi, Guangdong and Zhejia provinces.

Police discovered the groups were using more than 50 similar apps. By the time the suspects were apprehended by the police, the apps had been installed in more than 12,000 mobile phones and raked in over 100 million yuan.

In most cases, the apps' data, however, were hosted by an IT company based in Shanghai.

The major business of the company – headed by a man surnamed Jiang – was developing various fraudulent financial transaction apps ordered by the suspects and providing technical support for them.

The company advertised itself on foreign social networking platforms. Their clients either purchased the software for up to several hundred thousand yuan or paid the company tens of thousands of yuan monthly for maintenance of the apps.

The apps quoted authentic transaction data from financial markets, but the suspects were able to revise the data to make the investors lose money.

More than 5,600 suspects have been apprehended in over 1,400 alleged telecom and internet scams so far this year.

Shanghai police have been upgrading their technical capabilities for intercepting fraudulent information. They have intercepted more than 9 million telephone calls, over 40 million SMS messages and more than 1.2 billion web page visits suspected to be related to scams so far this year.

Reminder phone calls and in-person visits from police officers have been made to more than 4,000 residents contacted by alleged scammers, in addition to SMS messages sent to 100,000 people.

Due to close cooperation between the police and banks, 117 million yuan transferred to the alleged scammers has been frozen so far this year – preventing huge losses for victims.

As part of an intense crackdown on the abuse of SIM and bank cards, police have seized more than 22,000 cards and over 70 GoIP devices that enable dialing from any of the dozens of SIM cards inserted into them at the same time.