China Tourism Day kicks off with bevy of activities and discounts 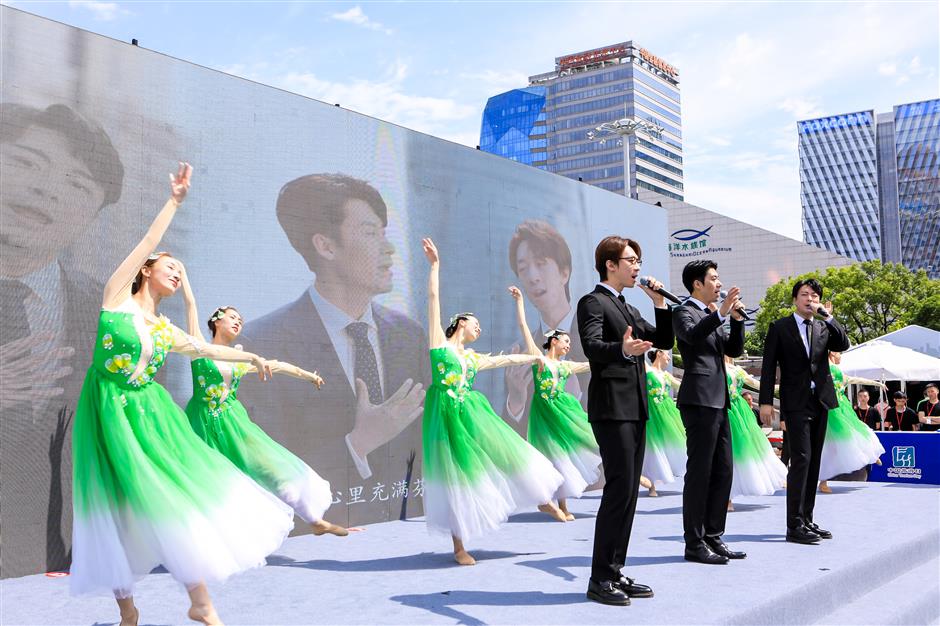 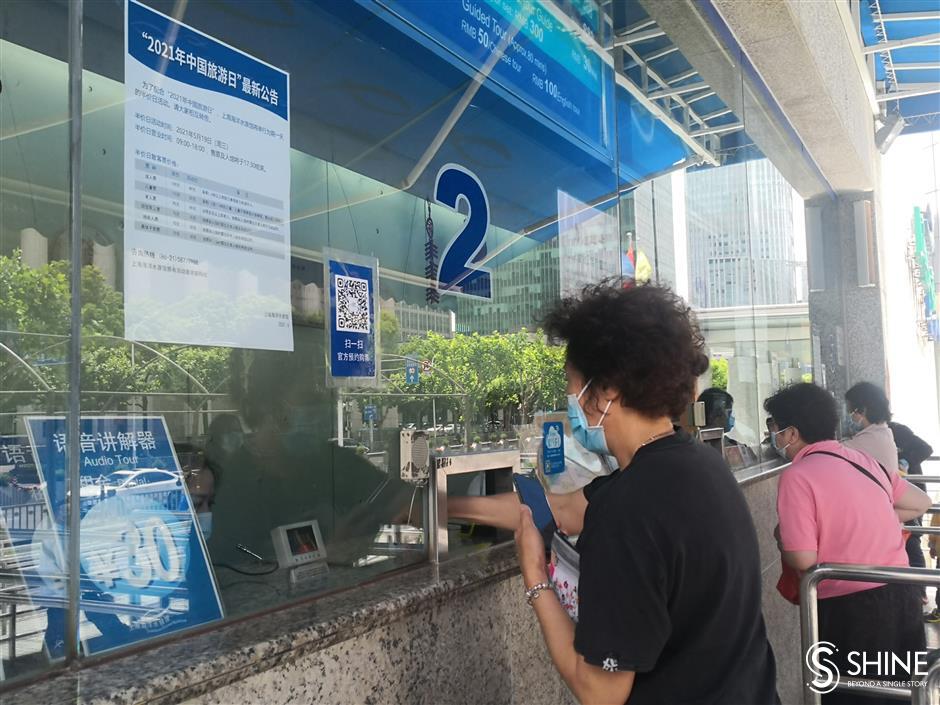 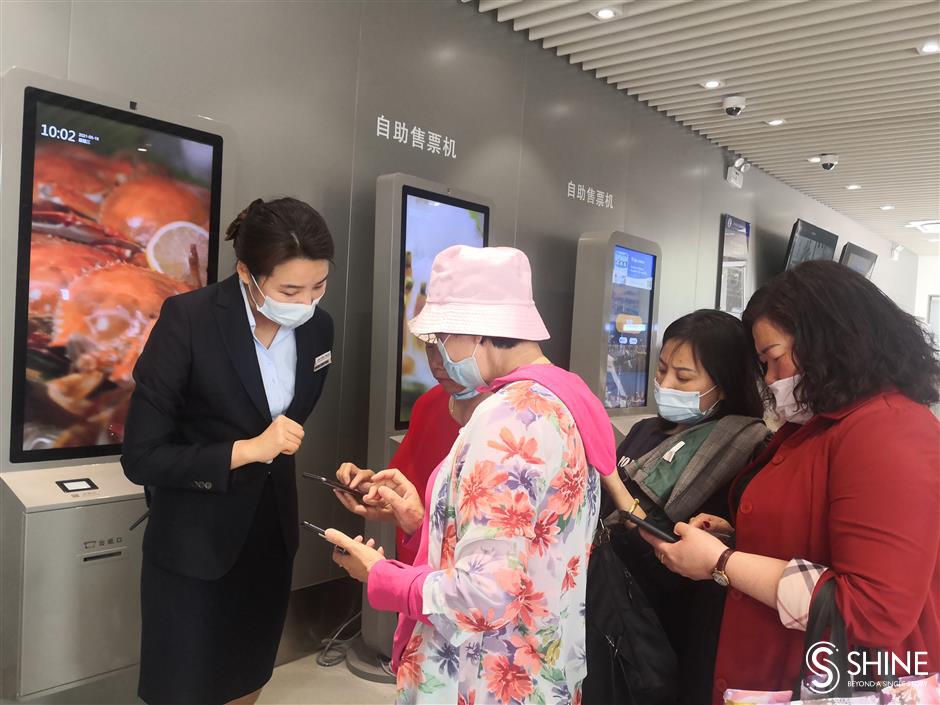 A staffer helps a visitor purchase a half-price ticket online at the Oriental Pearl TV Tower.

Shanghai marked the annual China Tourism Day today with a multitude of activities, half-price tickets and the release of "red" tourist routes.

Seven revolutionary tourist destinations, including Jinggangshan, the "cradle of the Chinese revolution," Ruijin, one of the departure places during the Red Army's Long March, Zunyi, a city that witnessed the crucial turning point leading to the ultimate success of the Long March, and Xibaipo Village, which once served as the headquarters of the Central Committee of the Chinese Communist Party, released a series of "red" tourist routes at the Shanghai Oriental Pearl TV Tower in the Pudong New Area.

A variety of tourist routes designed for the upcoming 10th China Flower Expo were also launched at the TV tower.

The expo, themed “Blossom with a Chinese Dream,” will take place in Chongming District from May 21 until July 2, the first flower expo to be held on an island. 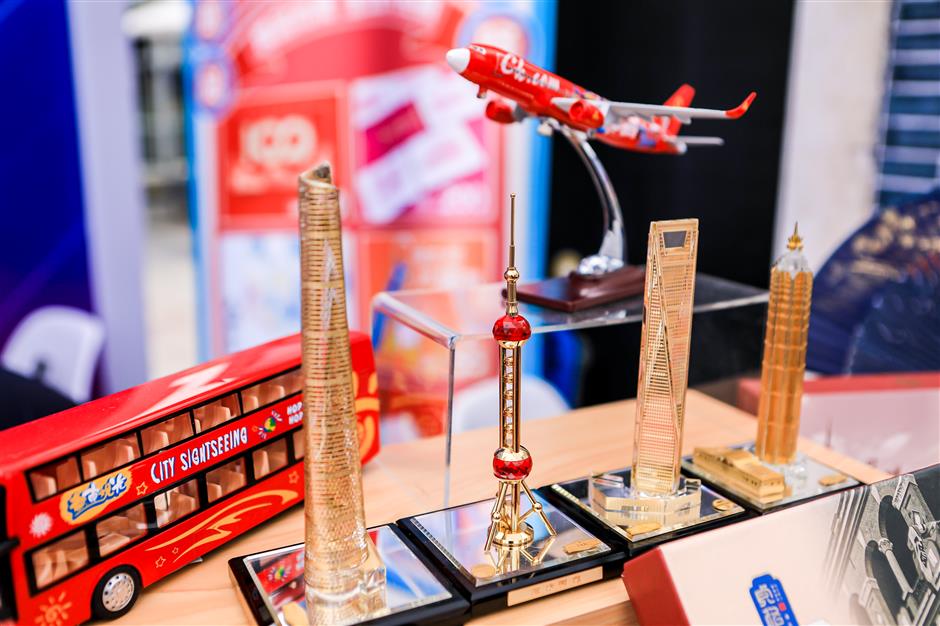 Souvenirs of Shanghai's landmark attractions are on sale at the Yangtze River Delta region culture and tourism bazaar at the Oriental Pearl TV Tower. 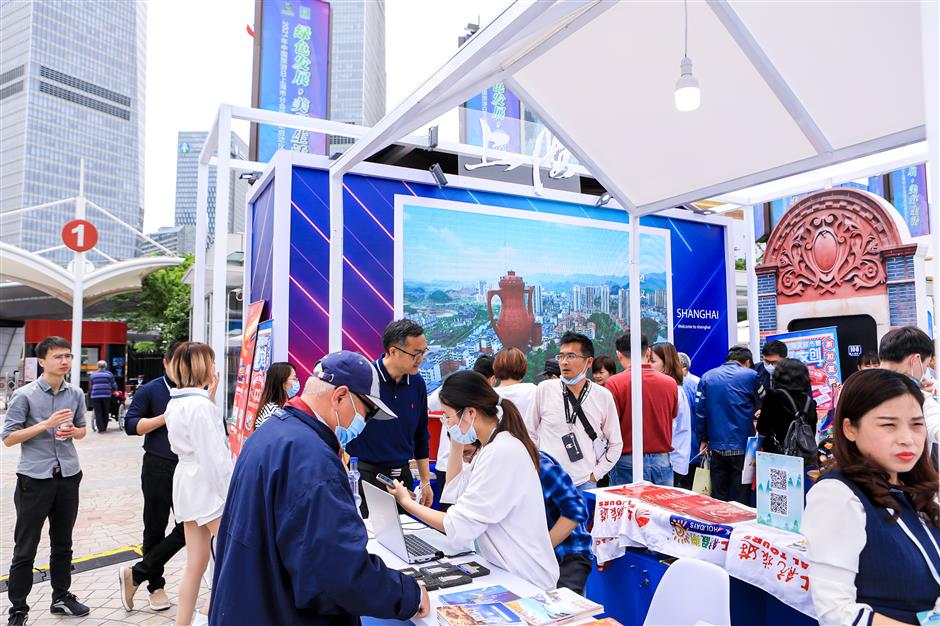 People wander through the bazaar today.

The tourist routes themed around wetlands, ecology, culture, industry and the countryside range from one to three days, and connect attractions like the site of the flower expo, Chongming Island Countryside Park, Dongtan Wetland Park, Qianwei Village and Mingzhu Lake scenic area. 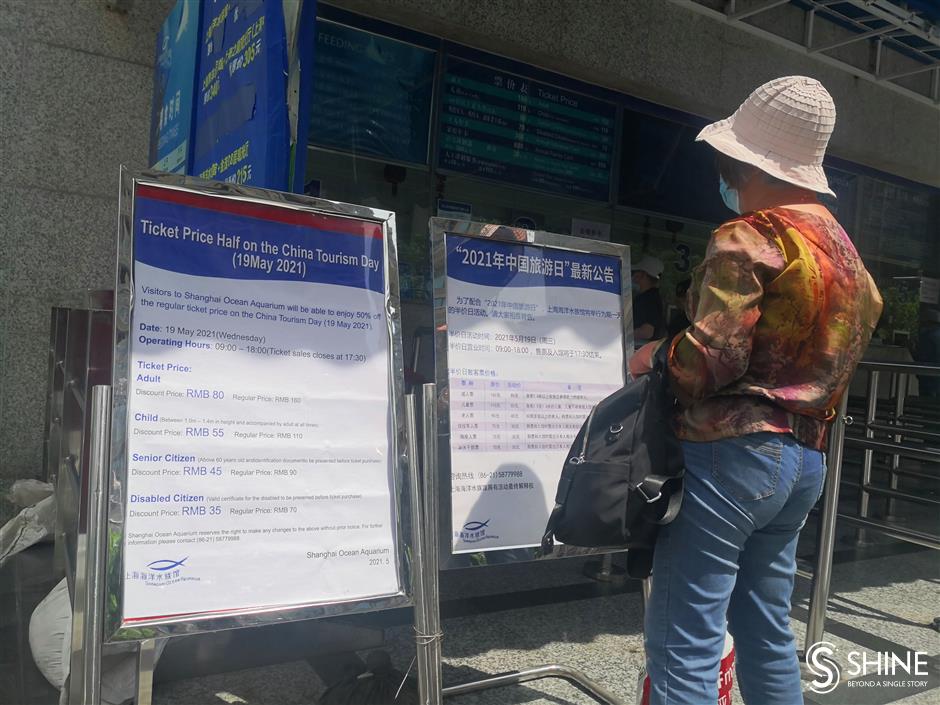 A visitor gets details about half-price tickets at the Shanghai Ocean Aquarium today.

"A lot of people have purchased tickets online, including quite a few seniors," said Chen Yu, an employee at the TV tower.

"It's a coincidence that my family was planning to visit the tower today anyway, and the half-price tickets are a pleasant surprise," said Jin Lele, a tourist from Changsha, Hunan Province. "For fear of long lines, I purchased two tickets online on Sunday and saved more than 300 yuan."

"Tickets to some tourist attractions in China are comparatively expensive, I hope there will be more such offerings to make admissions more affordable," said a local retiree surnamed Zhou at the tower.

A Shanghai souvenir design competition kicked off at the tower today as part of the celebration. 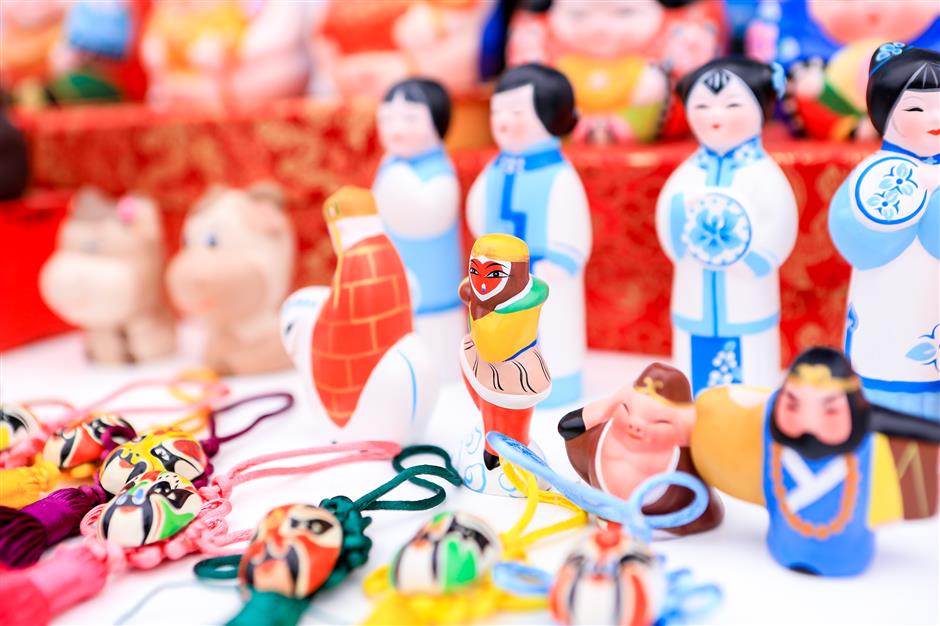 Souvenirs on sale at the bazaar 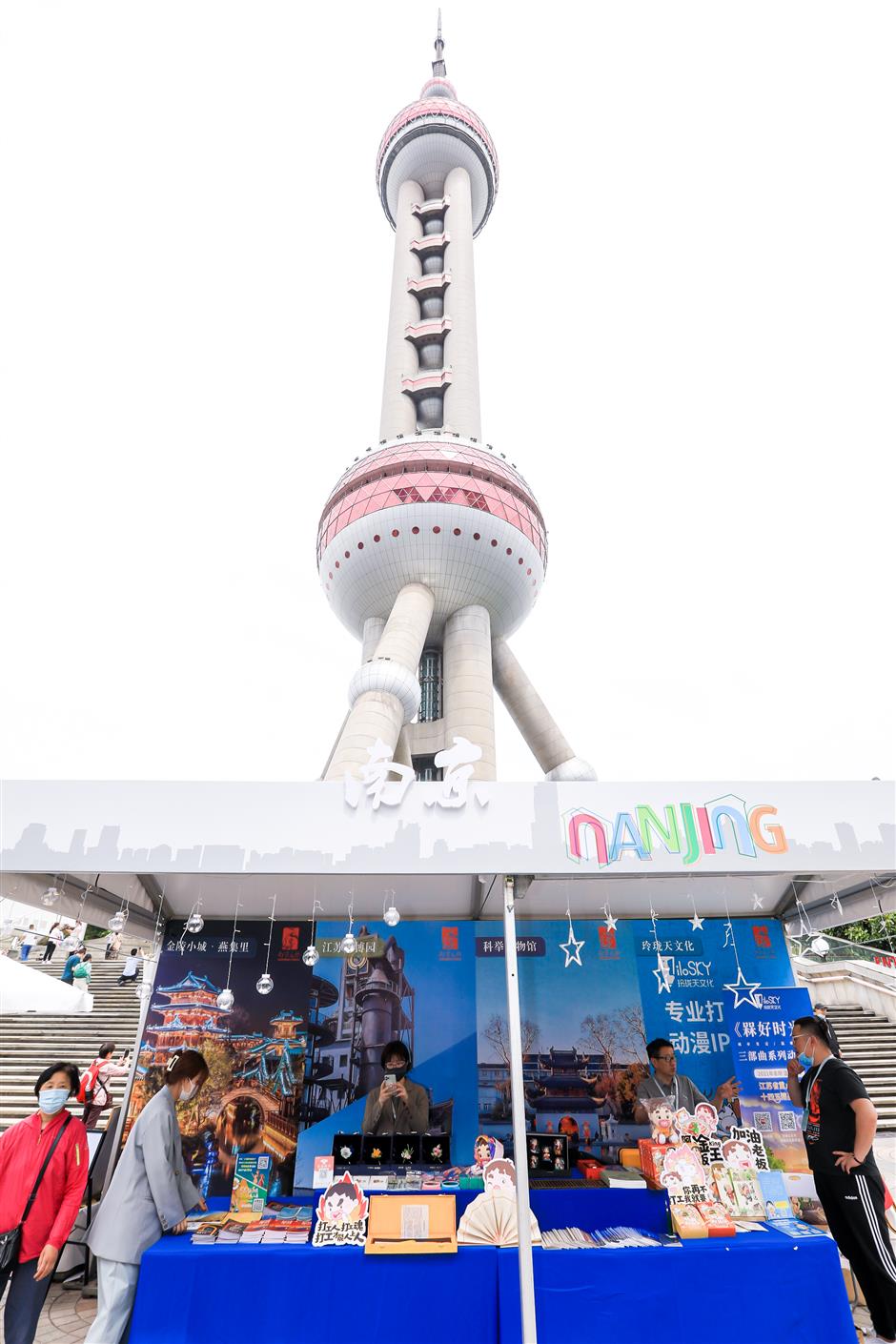 The bazaar presents the best of the delta region's tourism resources.

The competition highlights "red" culture, architecture and cultural and tourist landmarks along the Huangpu River and Suzhou Creek, according to the Shanghai Administration of Culture and Tourism, sponsor of the event. It aims to enhance the development of the five "new cities," and features a blend of tradition and fashion, intangible cultural heritage and cultural innovation.

A Yangtze River Delta region bazaar is underway at the tower, with more than 20 cities in the region presenting performances, intangible cultural heritage displays, tourist routes and culinary delicacies.

The bazaar features Sanlin dragon and lion dances, Shanghai woolen embroidery, Duoyunxuan woodblock prints and pankou, or frog fastener, a button on qipao with inheritors of intangible cultural heritage showing off their exquisite skills. There are also jazz concerts and magic shows.