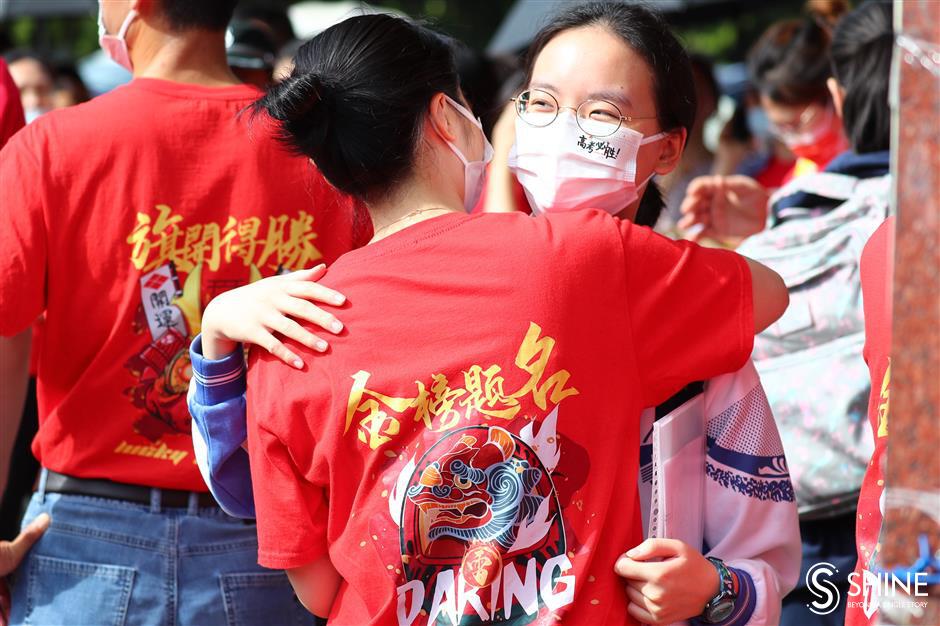 Parents wear red T-shirts with words of encouragement for their children on the first day of this year's gaokao.

About 50,000 students in Shanghai began the annual national college entrance examination today, commonly known as gaokao, at 104 test sites across the city – part of the 10.78 million Chinese students taking the exam across China.

The exams in the city usually last three days – from June 7 to June 9 – except for last year, when gaokao was delayed for a month due to the COVID-19 pandemic.

As this is the second year students have taken the exam during the pandemic, same measures, such as temperature screenings at entrances, were in place.

The first gaokao exam is the written Chinese test, which began at 9am. Students were advised to arrive at test sites 45 minutes earlier to go through necessary procedures and find their way to testing rooms.

At one of the test sites, Shanghai Shixi High School, many parents and students arrived before 8am and waited outside the school.

"Feeling nervous is inevitable," a student from Shanghai No.1 High School said. "I went to bed around 10pm last night. I think staying up too late to review isn't helpful."

Lin Ping, a mother of a student taking the exam, was dressed in qipao and standing outside the site. She believes the clothing brings good luck.

"We've booked a hotel room nearby because we live rather far from here," Lin said. "My son wasn't very nervous before, but he started to get tensed up closer to exam time."

"I woke up early this morning at 5:30am," she added. "I was so nervous that I brought two right-footed shoes."

Many parents booked hotel rooms nearby for fear of being late due to traffic.

Cao Jun accompanied his son to the test site by subway to avoid possible traffic congestion.

"I'm actually a little nervous now," Cao said. "We don't want to put too much pressure on him. Sometimes the greater the pressure, the harder it is to do well. I'm going to wait for him until he finishes the exam at 11:30am, then take him to lunch and let him have a rest at the hotel I booked in advance."

A full-time mother surnamed Li decided to wait outside after her daughter entered the school.

"As long as she tries her best, the result is not that important," said Li. "Although the exam is very important, she will have many opportunities in the future."

A couple surnamed Shan and Chen who live near the school come to cheer for the students every year.

"Gaokao is a national event that everyone cares about. It's a battle of the minds. We hope all the students do well," said Shan. 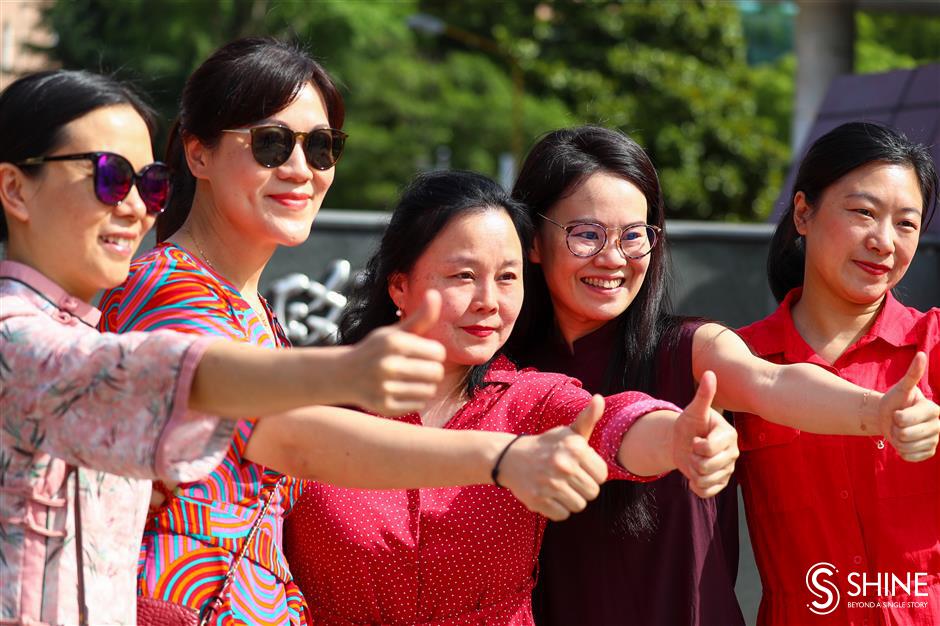 Mothers give thumbs-up to their children who are taking gaokao.