Shanghai police vow to serve the people better on their day 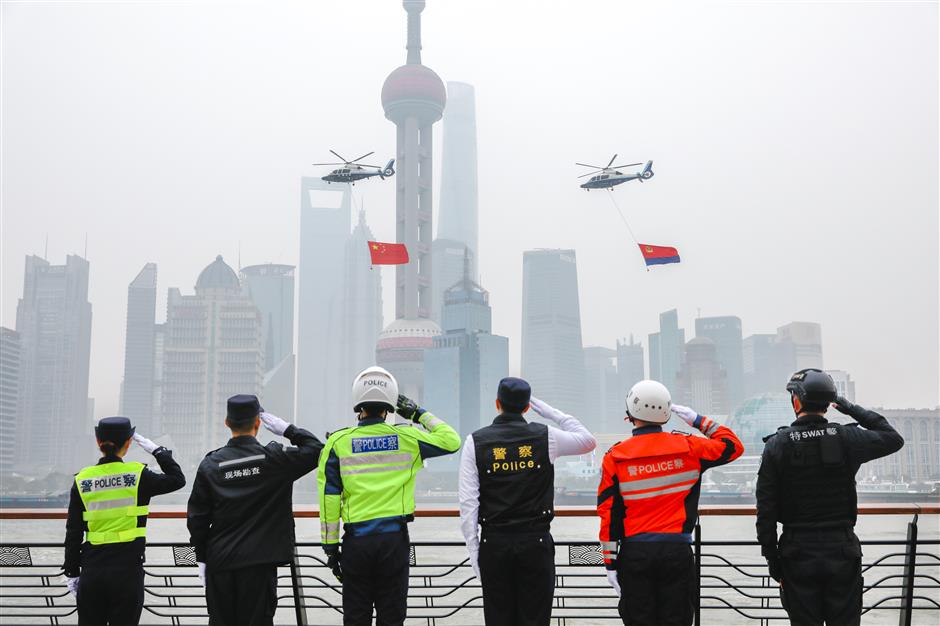 A national flag of China and a police flag are flown over Huangpu River on Monday to mark the Chinese People's Police Day.

The police reviewed their work in the past year and said they have been both smarter and more efficient in keeping Shanghai residents safe.

The number of criminal cases reported in the city last year fell 19.9 percent from the previous year.

Over 96 percent of burglaries reported last year were solved.

Last year, police solved 13.4 percent more Internet and telecom fraud cases, and the number of suspects caught in those cases more than doubled from the previous year, with about 960 million yuan (US$150 million) of loss prevented or recovered for residents, police said.

The number of fire cases caused by e-bikes, which often result from overcharging of the batteries or using wires to charge the bikes at home, was down 9.2 percent last year, as more and more e-bike parking and charging spots were constructed at residential complexes and surveillance cameras which can automatically detect e-bikes in elevators started to be installed, police said.

E-bikes are banned from residential buildings around the city.

Third-party surveys show that Shanghai residents have felt safer and safer and got more and more satisfied with the work of the local police in the past nine years, Shanghai police said. 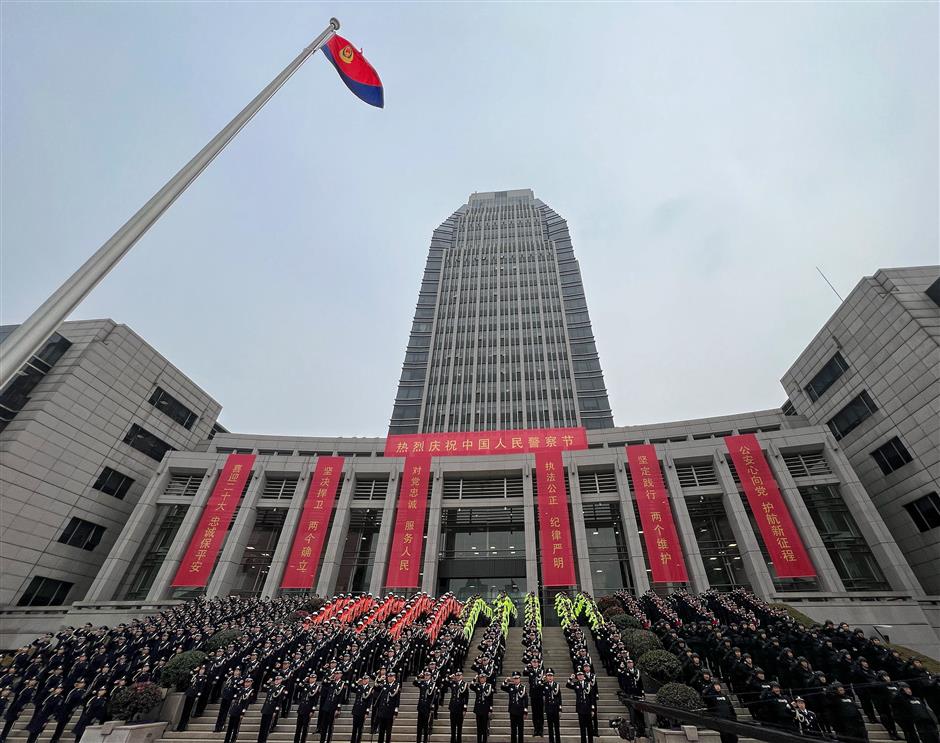 Representatives of police officers retake their oath they took when they entered the police force on a ceremony held at Shanghai Public Security Bureau on Monday. 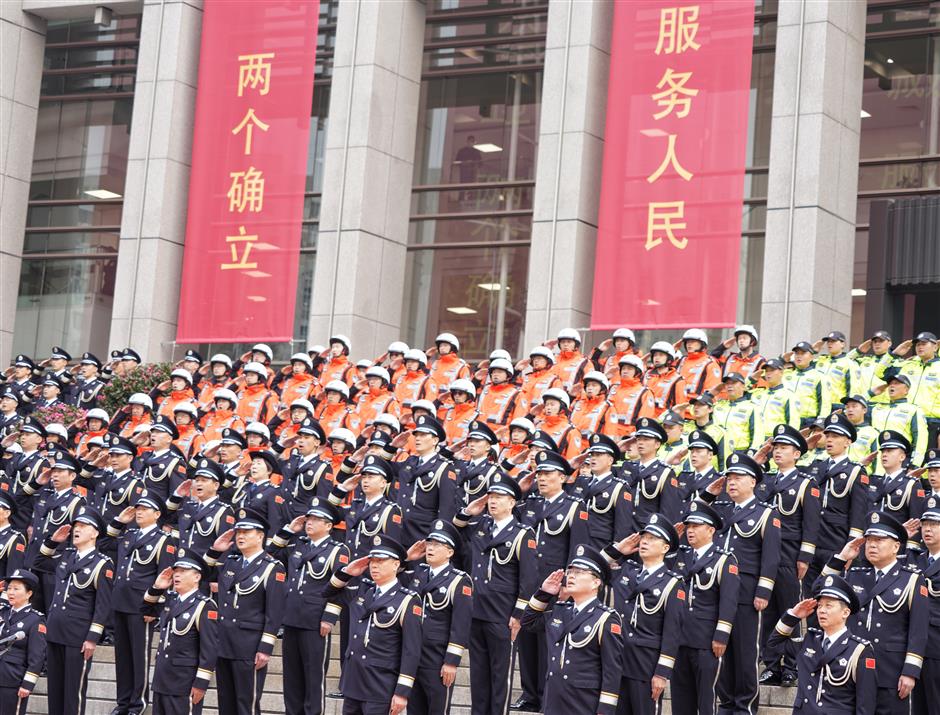 Representatives of police officers retake their oath they took when they entered the police force on a ceremony held at Shanghai Public Security Bureau on Monday.

The Chinese People's Police Day falls on January 10 because 110 is the national police call. Traditionally, police hold various open-door and community activities for the residents on this day.

Reviewing the oath, presenting police skills as well as showing the theme MV were the ways that police officers working in prisons, juvenile reformatory as well as drug rehabilitation centers celebrated their day on Monday, according to Shanghai Justice Bureau.

As highlights, during the event police officers from prisons and drug rehabilitation centers gave a baton, shield, guns and explosives performance, showing how they use their skills in daily training to imitate hunting and arresting criminals. 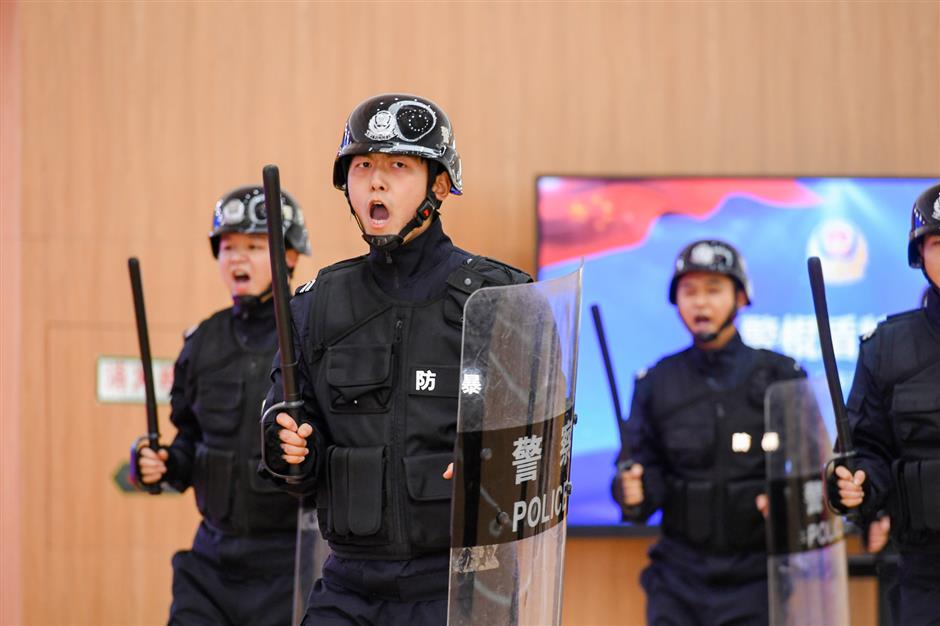 Police officers from prisons and drug rehabilitation center show how they use batons and shield in daily work on a Monday event.