Some of this year's recipients of the Shanghai Magnolia Silver Award pose for a group photo with award presenters.

Fifty expatriates from 13 countries, including the United States, Germany, France, Italy, Australia and Japan were honored on Sunday with the Shanghai Magnolia Silver Award in recognition of their contributions to the city's development, its international exchanges and the fight against the COVID-19 pandemic.

They are working in Shanghai in various fields, ranging from business, finance, shipping and education to science and technology, health care and culture.

At the award ceremony, Zhang Xiaosong, director of the Foreign Affairs Office of the Shanghai Government, thanked them for having stood together with the city's people through the challenges brought by the pandemic to maintain the city's steady momentum in social and economic development.

Zhang said that since the award was initiated in 1989, the city has conferred the honor to nearly 1,800 expatriates.

These have included industrial leaders and market pioneers who have promoted Shanghai's economic development and its international trade and exchanges; scholars who have tackled challenges and made breakthroughs to accelerate Shanghai's efforts in building itself a global hub for scientific and technological innovation; and philanthropists who have been selflessly dedicated to public welfare undertakings.

"Having lived and worked in the city for long, you are the best ambassadors of the city spirit of diversity, excellence, openness and humility," he said.

He also invited all the expat winners to continue to join local people to witness the new era of China's development and new miracle to take place in Shanghai.

"Together, let's build more prosperous businesses and live a happier life towards a better future in this city of glory," he said. 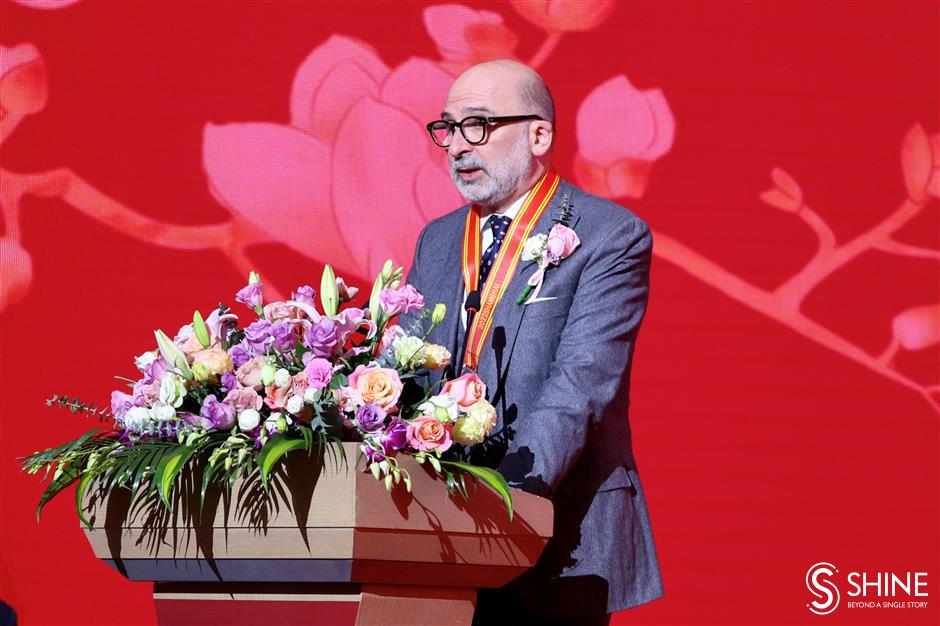 Maurizio Tonetti, director of the Perio-Implant Innovation Center of Shanghai Ninth People's Hospital, delivers a speech of thanks on behalf of all the recipients.

Maurizio Tonetti, director of the Perio-Implant Innovation Center of Shanghai Ninth People's Hospital, thanked the city, on behalf of this year's recipients, for the prestigious recognition.

"The Magnolia Award is a witness to the welcoming and inclusive attitude of Shanghai and its long history as a trading and cultural gate that has shaped the world for centuries," said the Italian.

"Today Shanghai is a true World City with its success rooted in history but solidly projected into the future.

"Specifically, Shanghai is one of the leading Science World Cities: a vibrant academic, technological and innovation hub building a knowledge economy on a global scale. A truly unique place where talent is given the opportunity to flourish and translate into socio-economic development and shared prosperity. "

Tonetti said the award made him more determined to serve as a "dental Marco Polo" to build a bridge of collaborative research in dentistry between China and foreign countries for the goal of better oral health and the development of a high-tech dental industry. 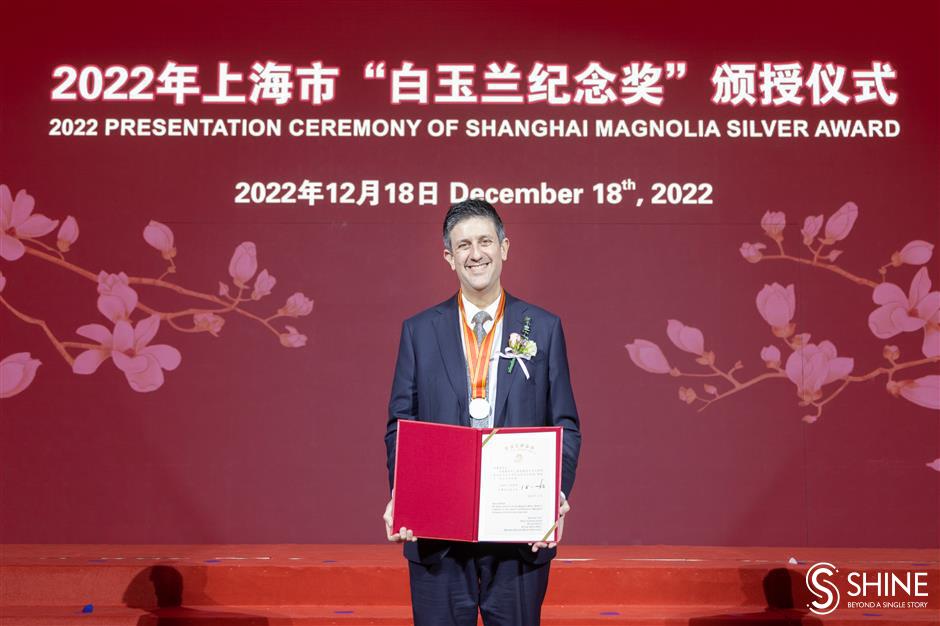 "I always feel it's a very safe city," he said. "It's a beautiful city that has a long history of Western and Chinese influences together. It's always been very welcoming to foreigners where a lot of foreigners have come and built their lives and their careers."

Having been in China for about 30 years with 20 years in Shanghai, he has witnessed great changes in the country and the city, including the construction of the many high-rise buildings, the Metro system and exchanges between China and the US.

But then with the economic development of China and Shanghai, many international companies began to build their Asian regional headquarters in Shanghai. He saw a huge explosion and interest of American students wanting to study in China, especially around the 2008 Beijing Olympics and the 2010 Shanghai World Expo.

"Now instead of running programs of 10 or 15 students, we're bringing over 500 students a year," he said. He added there is still a strong interest among American students to study in China and with relaxed pandemic control measures, American students will soon return to Shanghai for all kinds of programs. 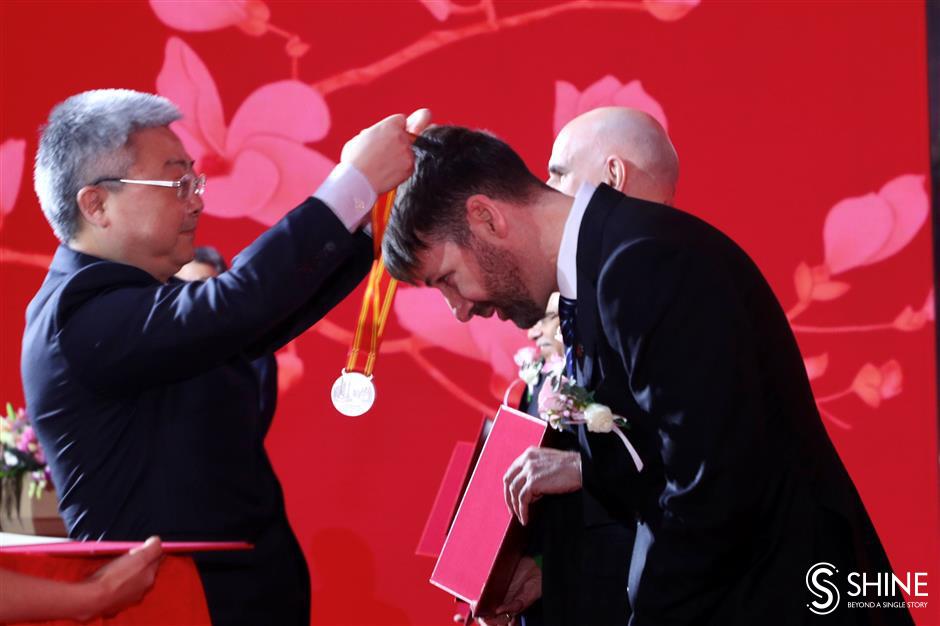 For Yuxin Chen, dean of business department of Shanghai New York University, the award is special, and he feels especially proud as his mother grew up in this city.

Born in Beijing, he had attended part of primary school and then college in Shanghai. He lived with his grandparents for a few years as a child. That experience brought him to every corner of the city, he said.

After living in the US for almost two decades, Chen was invited to launch NYU Shanghai's Business Department. He returned to Shanghai with his family in 2012.

The award is special for him as the university, the first Sino-American joint university, is celebrating its 10th anniversary with impressive achievements made in the past decade.

"One of the Shanghai genes is openness, and we actually make the city our classroom," he said.

"I think NYU Shanghai is really the most global university at least in Asia, probably around the world, because half of our students are Chinese and half are international."

He added that NYU Shanghai will stick to its mission to become the best research university.

Chen is the fifth member of the NYU Shanghai community to receive the Magnolia Silver Award.

Lehman and Waley-Cohen were also awarded the Shanghai Magnolia Gold Award in 2015 and 2019, respectively. Lehman received the title of Shanghai Honorary Citizen, the highest honor for expats in Shanghai, in 2021.