A family psychological experience center, with high-tech facilities and professional therapists, has opened to the public in Hangzhou. As the first one of its kind in China, it offers free mental healthcare, behavior therapy and other sensory experiences.

The center is technologically supported by the Institute of Psychological of Chinese Academy of Sciences, one of China’s leading organizations in the psychology field, and sponsored by Hangzhou Women’s Federation and Hangzhou Family Education Association.

According to the different psychological angles, the center is divided into eight function areas. After a patient completes all of the tests, a result will reveal the tester’s current mental condition. If necessary, the patient will then make an appointment with a psychiatrist who provides free counseling every Saturday morning.

Multiple devices transfer abstract psychological data into representational images and statistics, making people understand their inner mind. Up to now, the most popular facility with visitors on the site is the brainwave train.

A patient wears a brainwave receiver on their head and it drives the train through the power of the mind. The more they focus on the train, the faster it runs. But if the person becomes distracted, the train slows down and stops.

“This device is used to reflect a person’s capability of attention control,” said spokeswoman of the center, Li Yu. “Some kids’ absent-minded condition affects their school performance. Parents bring them here to see if they have a problem on concentrating.”

When a person is thinking, the brain sends different types of waves. The receiver catches those special waves and they drive the train. After a minute of testing, it analyzes the statistics of the received indexes. Usually, the normal attention control index spans between 70 to 90. 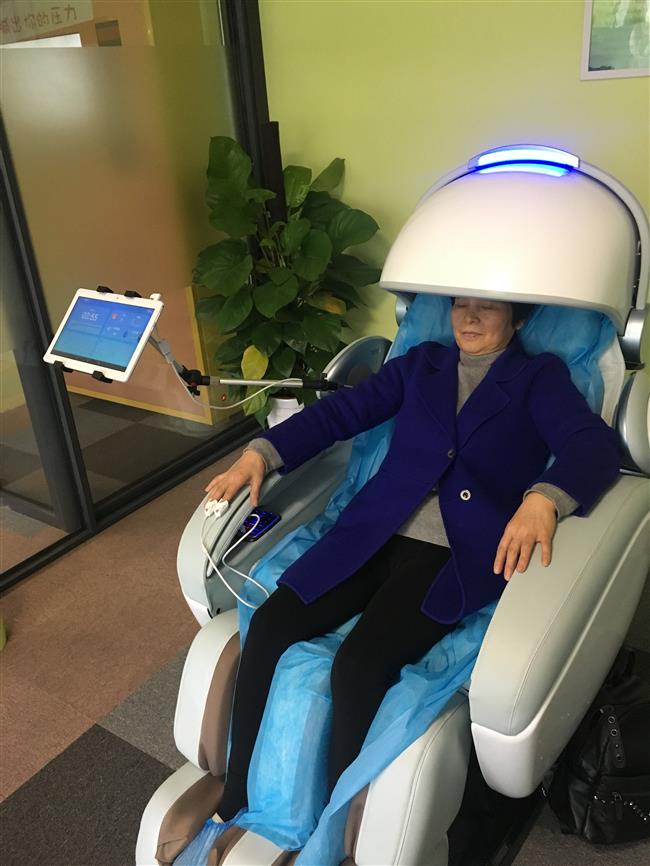 A woman tries to relax herself by sitting in the capsule chair.

“Attention control must be analyzed along with the relax index. If a person doesn’t relax himself during concentration, he may suffer mental fatigue, which would influence the attention degree in return,” Li added

The center also has a virtual reality device. The first VR device is used to give behavior therapy to acrophobia, trypophobia and examination anxiety disorder sufferers.

For people’s fear of great heights, in the virtual world, they step into a panoramic lift and ascend floor by floor. It is hoped to encourage them to overcome the fear through a faked scene. A therapist gives guidance during the test in order to instruct them to behave better.

Another VR device is to adjust mood. Wearing a receiver and VR glass, a person would find themselves in the center of the West Lake in rainy conditions. If the inner emotion is altered toward happiness, the rain stops and lotus flowers bloom.

“Brainwave and electrodermal activity fluctuates if our emotion is adjusted. The machine receives a person’s physiological changes and then makes the virtual reality alter,” said Li.

The capsule chair specializes in relaxing people who are suffering from insomnia and huge burdens. When a tester’s mind and body is eased with special music and biological light, the device also analyzes their heartbeats and electrodermal activity in order to provide more suitable music and light.

“This is one of the most popular facilities in our center. Many nearby office workers come to relax themselves during a lunch break,” said Li. “If necessary, we will offer more devices to provide visitors with a better service.”

Besides, the center also has four machines with an online authoritative Eysenck Personality Questionnaire to assess the personality traits of a person.

As the center puts emphasis on a family psychological education, a part of the space is designed for special parent-and-kid tests.

A device imitates the eyesight changes of babies, which allows parents to see the world through a child’s eyes and how they can communicate with them via available methods. Another facility uses simple cartoons to tell kids about basic psychological principles in life, like Hawthorne and Matthew effects.

“Psychological education should start from family,” said Li. “Many parents bring their bad mood home and exert it on their kids. The on-site device test makes them acknowledge their inadequate management of emotions and make a change.

Little kids often have an obscure conception of time. In daily life, they easily get angry due to the wrong evaluation of time. For example, a kid makes a promise to switch off the television after five minutes. But when dad and mom come to turn it off, as they talked before, the child has a tantrum because in the kid’s mind only two minutes have elapsed in time.

This device helps kids understand the concept of time. Different videos about animals and cartoons are played on a screen. When one minute is gone the child has to press a button.

“When we see a caterpillar crawl, kids may feel time goes slowly. But when they are attracted to a cartoon, time flies quickly,” said Li. “This test aims to help them build up the correct cognition of time and provide parents with effective ways to change a kid’s former wrong concept.”

Shanghai Daily recommends visiting the center on workdays since weekends often packed with visitors. Meanwhile, people can directly make an appointment with psychiatrists without doing the device tests.