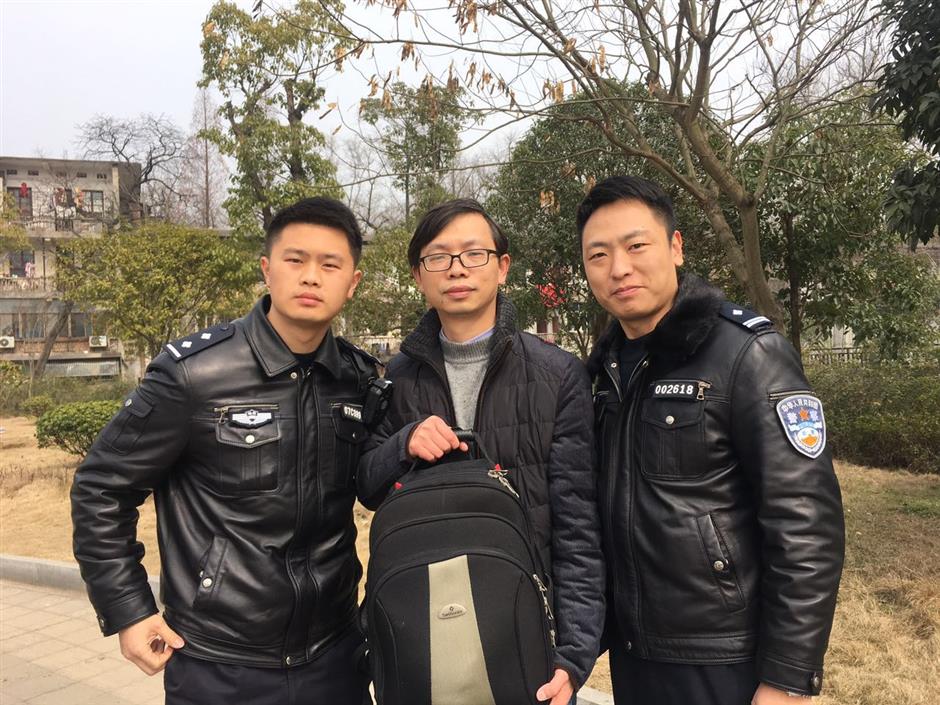 Two policemen from Huanghua Airport in Changsha, Hunan Province, who eventually found and returned Deng Jianguo's lost bag at around 11am today, after an outpouring of support from the public. Deng lost it in the airport on February 8. Photo supplied by Deng Jianguo.

Deng Jianguo, associate professor of journalism at Fudan University, lost a bag on a shuttle bus at Huanghua Airport in Changsha, Hunan Province, on February 8. The story of that bag would soon hit the airwaves.

It contained a computer with important documents, including papers from many years of research. The documents are so important that he offered a 10,000 yuan (US$1,588) reward for its return.

But in the end, because of the outpouring of support from the public and the team effort that ensued, Professor Deng didn't end up having to pay the reward at all.

He was heading to his hometown for the Spring Festival, a time of family reunion for most Chinese people, he told Shanghai Daily in a phone interview today.

“I didn't realize it was even lost until after I arrived downtown," he recalls. "Then I dashed back to the airport, and reported the case to airport police at about 10:00pm.”

At the same time, he offered a reward of 10,000 yuan to anyone who could find and return his bag. He told his story on WeChat and other social media channels. Major news media including The Paper also reported the case.

“My son was wondering how I had become a 'celebrity' just because I had lost my bag,” he joked.

After working around the clock analyzing surveillance videos, airport policemen finally zoomed in on one man who apparently took Deng’s bag from the shuttle bus. Police found the person and returned the professor's bag to him this morning.

Everything in the bag was intact, including that all important computer.

“For me, it was a story of a happy ending strewn with despair and frustration,” he said. “I nearly thought it would be a mission impossible to get my bag back.”

The story was also one of the power of new media, which reached far and wide among myriad people, many of whom never knew who Deng was.

“One woman from Beijing called me (before my bag was found) to check whether my story was fabricated,” Deng said. “Upon finding out it was real, she said she would help by re-tweeting it to help more people know about my case.”

The professor says the public support gave him hope. "That she took the initiative to verify my case shows that people still care about each other, that people are still ready to help each other even if they are far apart.”

Some netizens even called him to share their own experiences in similar situations.

“Many friends and strangers called me and taught me how to handle such a frustrating case. People really care, even about a stranger,” Deng said. “And apart from the police and netizens, many other unsung heroes – ordinary staff at the airport’s customer services, publicity, IT support and relay transport departments – also worked overtime to help me find my bag.”

Asked about his 10,000 yuan reward, he said he didn't give it to anyone in the end, and expressed heart-felt thanks to all those who extended a helping hand.