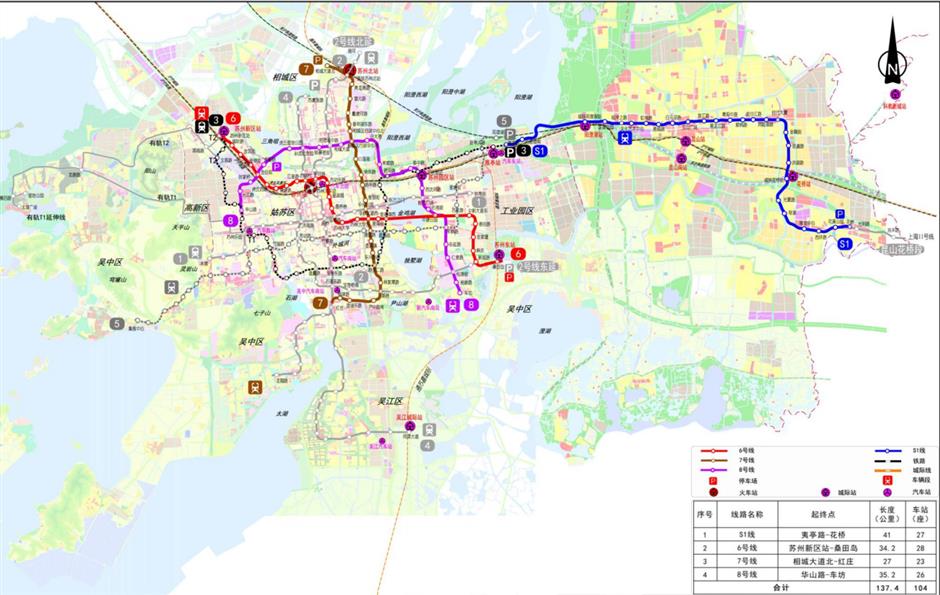 The newly approved Line S1 (in blue color) of Suzhou Metro system will connect with the Huaqiao Station, one of the terminuses of Shanghai's Metro Line 11.

Visiting nearby Suzhou could become part of daily commute for Shanghai residents as a new subway line linking the two cities takes shape.

Suzhou, in neighboring Jiangsu Province, plans to build a new rail line to link up with Shanghai’s Metro system.

As the longest among the four newly approved lines, Line S1 will connect with Huaqiao Station, one of the terminuses of Shanghai’s Metro Line 11.

According to the plan published on the official website of the commission, the 41-kilometer Line S1 will start from Suzhou Industry Park in the east of downtown and go through Kunshan, a county-level city in Jiangsu, to reach Huaqiao in Kunshan.

Line S1 will also intersect with Line 3 of the Suzhou Metro, which runs across Suzhou, according to the commission.

Line S1 will use Level-A trains, the biggest among the nation’s four tiers of Metro carriers, with either four or six carriages and operating at a maximum speed of 100 kilometers per hour. Most of Shanghai’s Metro trains have an average speed of 80kph.

Suzhou should do research on how to better connect with Shanghai’s Metro Line 11 in the early planning stage, by optimizing the design for subway stations and transit plans, the commission said.

Detailed plans will be decided by both the Jiangsu Province and Shanghai governments, according to the commission.

The current most common mode for locals to get to Suzhou is by high-speed or bullet trains or by road. It takes about half an hour to reach Suzhou from local railway stations.

The commission has also approved Lines 6, 7 and 8 for Suzhou’s Metro system. Upon completion, the city’s subway length will total 353.4 kilometers.

Currently, the garden city has three Metro lines — Line 1, 2 and 4 — in operation, while two new lines, Line 3 and 5 are under construction, according to Suzhou’s Metro operator.