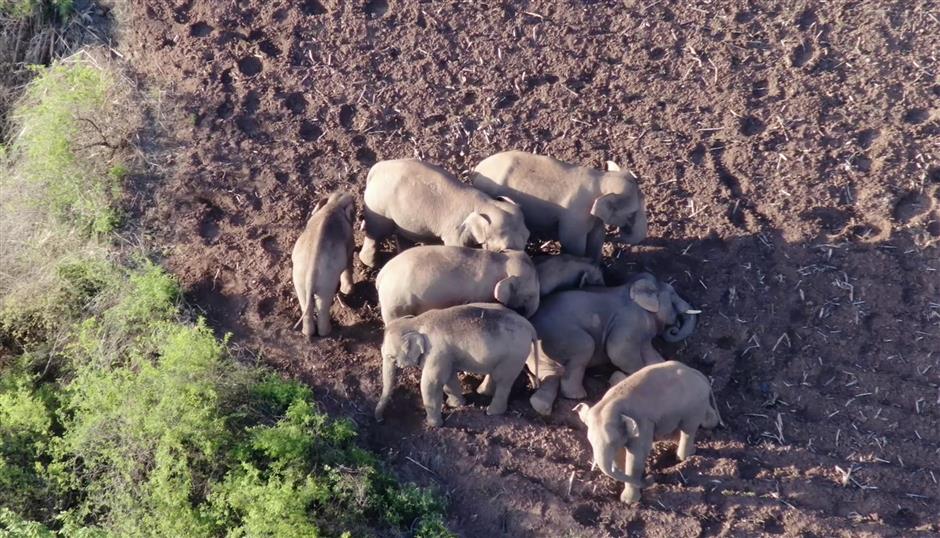 The herd of Asian elephants in Eshan County, Yunnan Province, on June 20, 2021.

The herd headed 11.2 km south between 6pm on Monday and the same time on Tuesday.

The herd is at a location of a relatively high altitude, where telecommunication signal is poor, which has added to the difficulty of monitoring the herd, according to the headquarters in charge of monitoring the elephants' migration.

A male elephant, which strayed 17 days ago, is now 30 km away in Jinning District in Kunming, the provincial capital.

Five new experts have joined the expert team at the headquarters to help work on plans to guide the elephants' migration.

On Tuesday, a total of 210 people were mobilized for the work, and 4,774 local residents were evacuated.

The animals have traveled about 500 km north from their forest home in southern Yunnan's Xishuangbanna Dai Autonomous Prefecture, reaching Kunming on June 2.

For over a month, authorities have sent police to escort the herd, evacuated roads to facilitate their passage, and used food to distract them from entering densely populated areas.

Asian elephants are primarily found in Yunnan and are under A-level state protection in China. Thanks to enhanced protection efforts, the wild elephant population in the province grew to about 300, up from 193 in the 1980s.