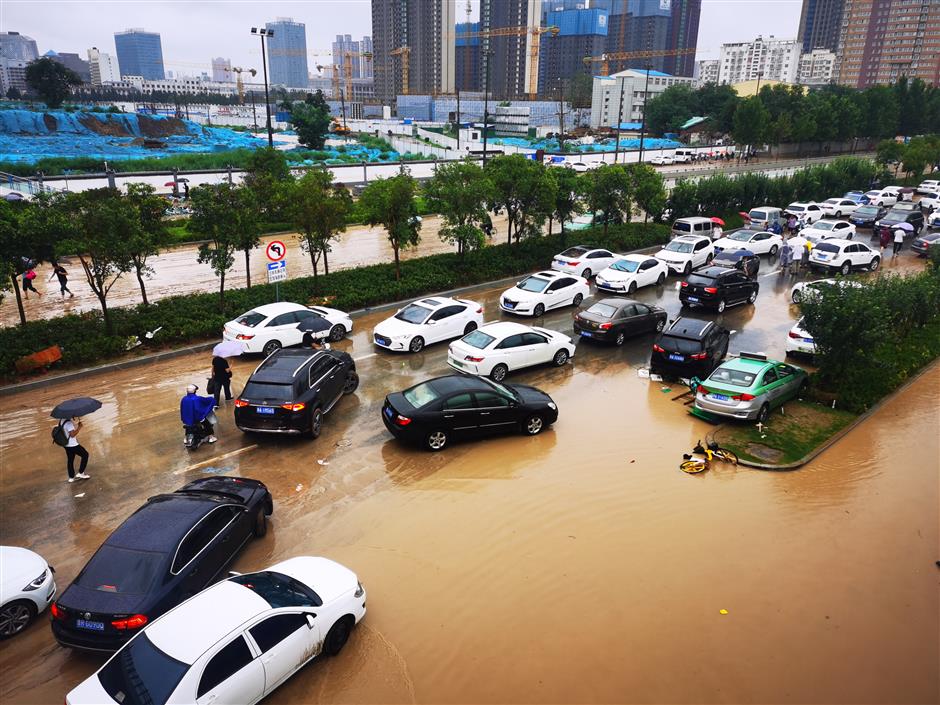 Torrential rain has caused severe flooding on some roads in downtown Zhengzhou, capital of central China's Henan Province, on Wednesday.

Chinese authorities on Wednesday raised the emergency response for flood control to Level II, the second-highest level in the response system, as heavy downpours continued to lash the central China province of Henan.

Extremely heavy rainfall hit Henan on Tuesday, with precipitation in Zhengzhou, the provincial capital, exceeding the highest level on local weather records, according to the Ministry of Emergency Management (MEM).

The rainstorm has caused the water level in a reservoir to rise rapidly, said the ministry, adding that all local residents downstream have been relocated in advance.

From 8 am Saturday to 8 am Wednesday, the average rainfall in Zhengzhou was 458.2 mm, with accumulated precipitation in some areas even surpassing the city's total average yearly rainfall, according to the China Meteorological Administration.

The MEM has dispatched a working team to the affected areas in Henan to help local authorities with disaster relief work.

A rescue team of 1,800 firefighters has been deployed to the flood-hit region from seven neighboring provinces, together with boats, pumping vehicles and flood rescue kits.

Traffic has been disrupted in up to 30 sections of national and provincial highways in Henan due to flooding and collapsed roads, according to the Ministry of Transport.

As of 7 am Wednesday, 26 expressways in the region have reported partial closures, but there are not currently high numbers of vehicles and travelers stranded, said the transport ministry.

Floods and downpours have also affected flight and train services. With a red alert for flight delays in place from 8 pm Tuesday to noon on Wednesday, all flights intending to land at the airport in Zhengzhou were canceled.

Parts of the Zhengzhou-Xi'an high-speed railway and the Lianyungang-Lanzhou railway saw tracks and equipment flooded, as well as trackbed collapses, said the China State Railway Group.

To restore the storm-damaged communication networks in Zhengzhou, local telecommunication companies have rushed to repair at least 6,300 base stations and 275 kilometers of optical fiber cables as of 10 am Wednesday, according to the Ministry of Industry and Information Technology.

China's national observatory on Wednesday morning renewed an orange alert for rainstorms, the second-highest alert in its color-coded weather warning system, in many parts of the country including Henan.

From Wednesday morning to Thursday morning, heavy rains and rainstorms will continue in Henan and its neighboring provinces, the observatory said. Parts of Henan and Hebei will see rainstorms with up to 280 mm of daily precipitation.

The observatory warned that some areas are likely to see over 70 mm of hourly rainfall, accompanied by thunderstorms and gales.