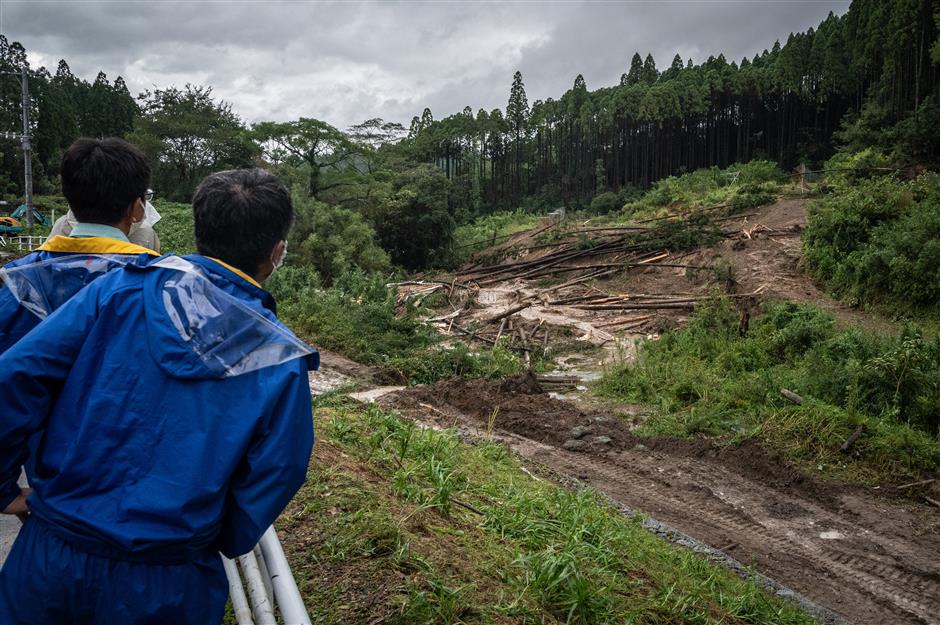 Workers survey the site of a landslide caused by Typhoon Nanmadol in Mimata, Miyazaki prefecture, on September 19, 2022.

Typhoon Nanmadol became an extratropical cyclone on Tuesday morning after it traveled across the Japanese archipelago to the Pacific, which left at least two people dead and 115 others injured.

The Japan Meteorological Agency (JMA) said the large and powerful typhoon transitioned into an extratropical low-pressure system at 9am on Tuesday (0am GMT) after moving across Japan's northeastern Tohoku region. The agency continued to warn of violent winds, high tides and mudslides across western to northern Japan.

The storm was moving with an atmospheric pressure of 985 hectopascals early on Tuesday but was still packing maximum winds of 126 km per hour. Localized downpours of more than 50 mm per hour are still possible through late Tuesday afternoon in eastern and northern Japan, weather officials said.

Rainfall could reach up to 120 mm in the 24 hours through Wednesday morning in central and eastern Japan, including Tokyo, and 100 mm in the northeast.

Nanmadol, the season's 14th typhoon, deemed one of the most powerful on record, unleashed unprecedented winds and intense rainfall when it reached the Kyushu region on Sunday.

At least two people were killed Monday when the storm slammed Kyushu, including a man found in a car that had been submerged in Miyazaki Prefecture. At least 115 people were injured amid the extreme weather, according to local authorities.

Over 350,000 homes were still without power early Tuesday, according to Kyushu Electric Power Company.