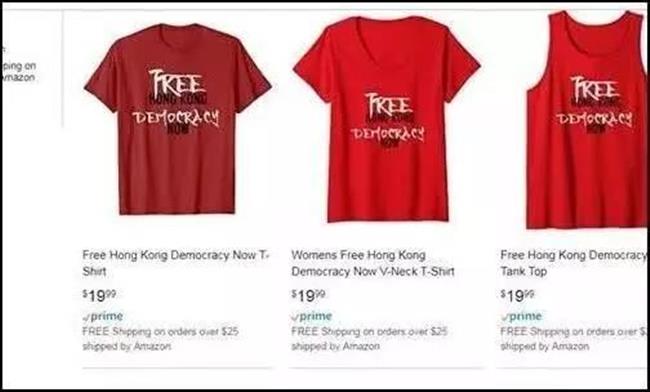 Amazon is facing an online backlash over T-shirts on its website that feature slogans said to be supporting an independent Hong Kong and violent protests in the Chinese city.

The Global Times newspaper said that many Chinese Internet users had found T-shirts for sale carrying slogans such as "Free Hong Kong Democracy Now" and "Hong Kong is Not China.”

There were claims that the online shopping site showed no respect toward the “one country, two systems” principle and Chinese national sovereignty.

The e-commerce giant shut its domestic marketplace, Amazon.cn, in July, but some overseas goods can still be shipped into the country.

In a statement, the company said: "Amazon has always and will continue to acknowledge the longstanding and widely recognized policy of 'one China, two systems.’ Every country where we operate has different laws, and we will continue to respect those local laws where we do business."

However, one response on Weibo said: "Amazon respecting the ‘one country, two systems’ policy? Then please explain how those ‘Hong Kong independence’ T-shirts got online? And how does Amazon deal with the involved sellers?”

Another said: “Amazon is so hypocritical to say it has always respected ‘one country, two systems,’ but actually sells clothes featuring words of ‘Hong Kong independence.’ We don’t accept such a response.”

A number of Chinese celebrities severed ties with fashion labels earlier this week, after online users pointed out the companies were selling clothing that referred to Hong Kong and Taiwan as separate from China.

Coach, which drew fire for a T-shirt that implied Taiwan was a distinct entity from China, said that in May last year it had discovered a "serious inaccuracy" in one of its clothing items and had pulled it from shelves.