Traditional handicrafts, as well as products at the cutting edge of high technology and innovation, are some of the highlights of the annual West Lake International Expo that kicked off last Friday.

Luminaries such as President of the World Leisure Organization Roger Coles; former Minister of Foreign Affairs of France Philippe Douste-Blazy; and former President of Zhejiang University Pan Yunhe were invited to discuss the trends in the world economy, leisure and technological fields, and the future development of Hangzhou. 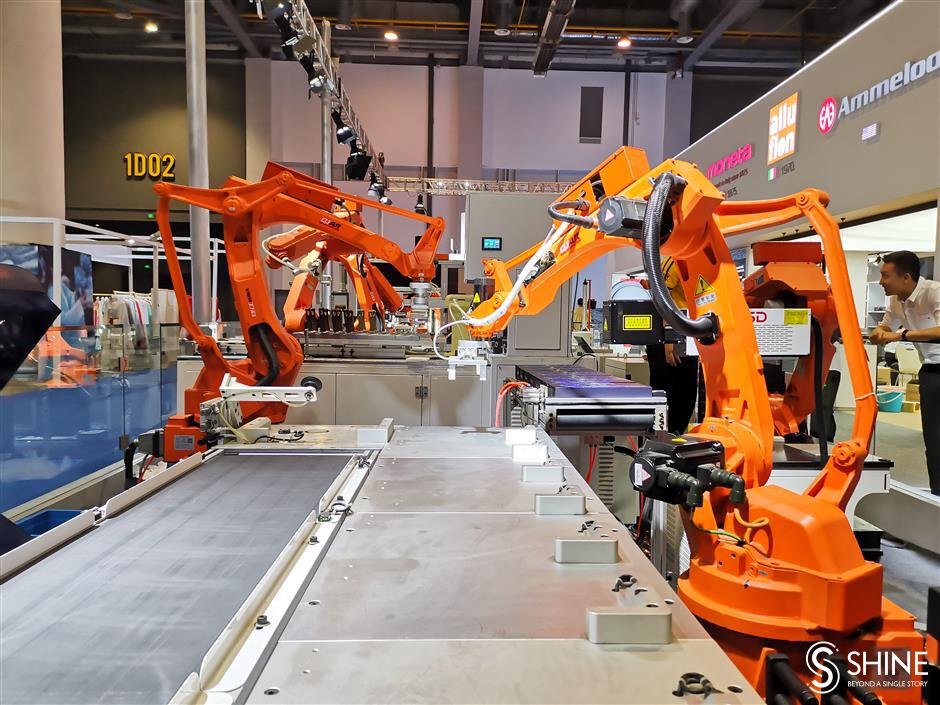 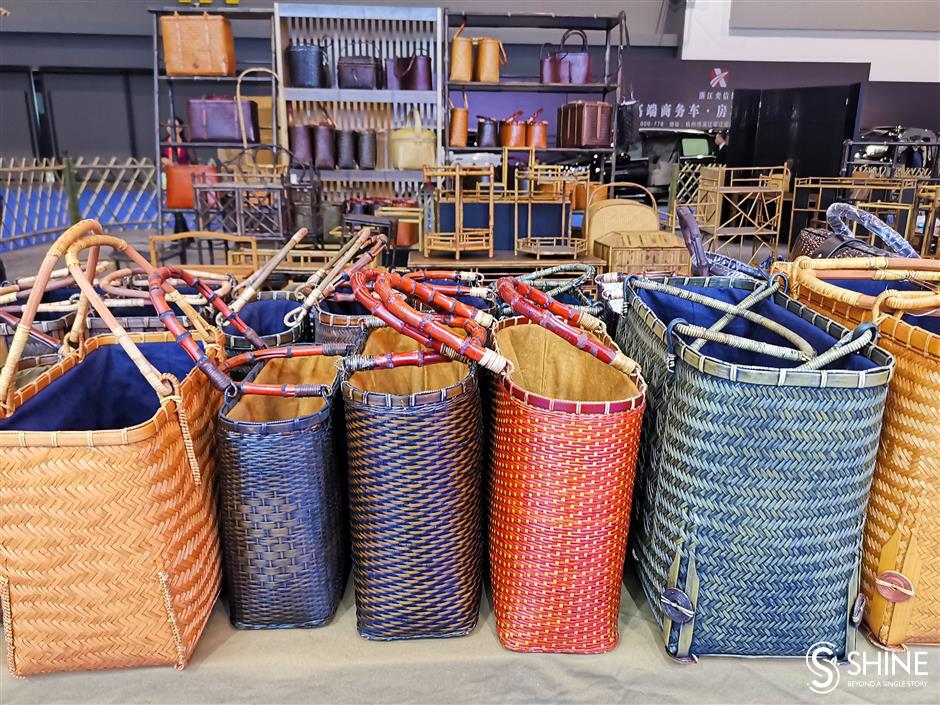 These events, hosted at the Hangzhou International Expo Center, provided a platform to advance global leisure, creative and high-tech concepts and culture studies.

A variety of handicrafts, organic foods and tourism products from around China were also displayed under the expo umbrella.

The company is based in Anji County, Zhejiang Province. The area is famed for its mountain ranges covered with undulating bamboo forests.

The company employes 80 local craftspeople to turn local bamboo into knickknacks and handicrafts.

“Our bamboo-woven handbags were given as state gifts to other countries by national leaders. We are attending the expo in hopes of promoting products to foreign visitors,” said Ling Yuting, manager of the company.

Along with makers of ready-made handicrafts, expo organizers invited artisans to create works on site and live-streamed it through 5G technology.

Yu Beihong, a celebrated fan-making craftswoman from time-honored brand Wang Xingji, was invited by China Telecom to live-stream her skills through the company’s new 5G network.

“It a brand-new experience for me,” Yu told Shanghai Daily. “The technology could help promote traditions among young people, injecting new energy into old crafts.” 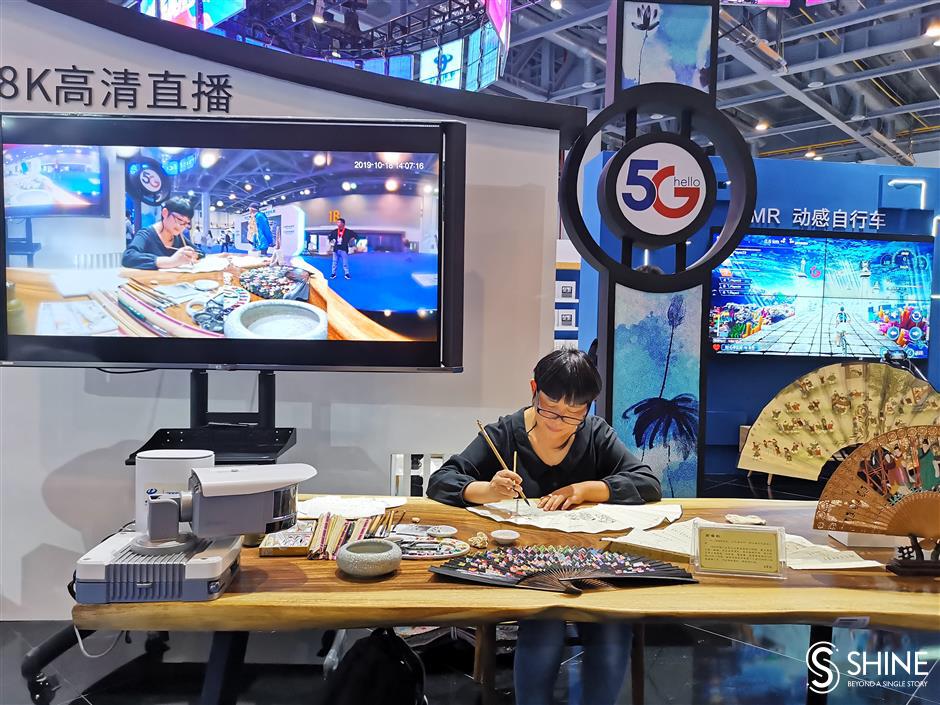 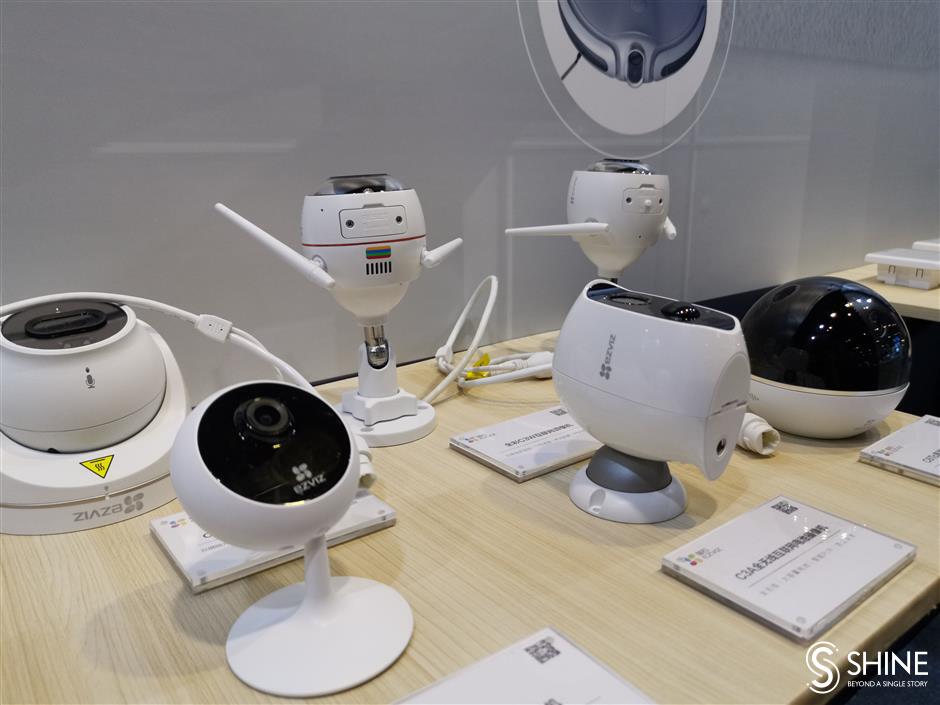 Wang Xingji, named after its founder, has been in business since 1875. It is considered one of the finest brands of Chinese fans by virtue of its long history and high-quality standards. Yu began to make fans in the 1980s and was named as a Zhejiang Province intangible cultural heritage inheritor.

A security robot was exhibited at the expo site. The “intelligent” robot can patrol residential communities, scan passers-by and report wanted suspects to security offices.

“The hi-fi camera could take pictures of people and transfer data at 5G speed. It links with the databases of police departments and works more effectively than the 4G version,” said Wang Jiajie from China Unicom.

The robots are already being applied in industrial parks, with plans to extend their use to more public venues.

AI robots are not the only products in the security field. Local Hangzhou company EZVIZ also displayed a series of new products that make life safer and more convenient. As a top producer of security products in China, the company has developed a smart home security system comprised of fingerprint locks, automatic curtains, monitor cameras, wireless routers, alarms and power plugs.

At the expo, the Hangzhou government displayed its “City Brain” system in efforts to offer a new experience in city administration.

Data from government departments have been pooled onto the AI platform, which can be shared between departments. The “City Brain” makes daily work more effective and cuts down red tape from official service windows.

Meanwhile, a cultural temple fair was set up along the road, offering passers-by a wide range of creative knickknacks from local design brands.

West Lake International Expo was first held in 1929 but later suspended. In 2000, the Hangzhou government revived the expo, which today has become an annual extravaganza of leisure, tourism, culture and business.

In recent years, the expo has accelerated the development of local industries, and has been developed into a platform to attract talent from all fields of technology and science.