Happiness for Mou Qixing is a needle and thread 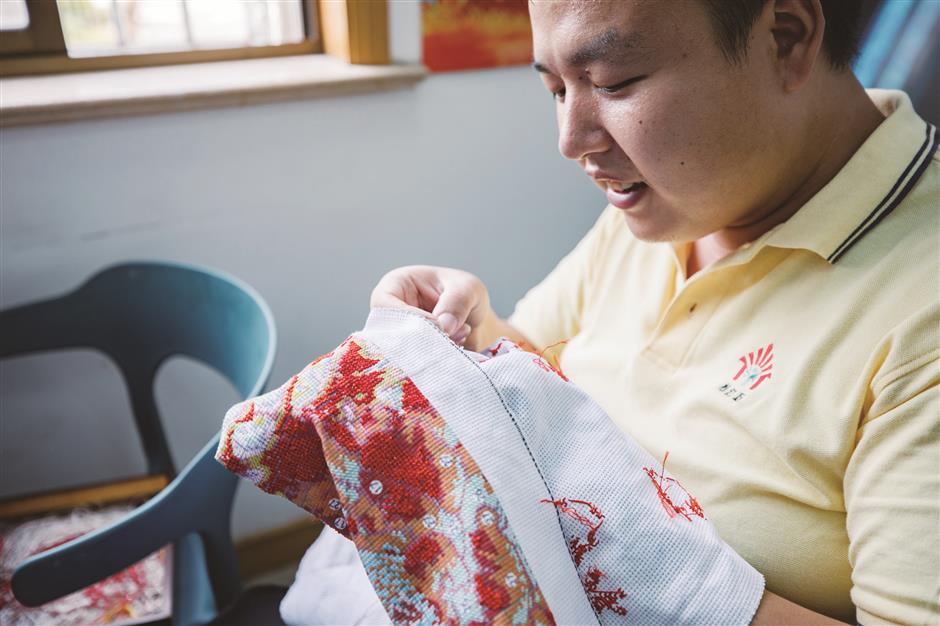 Mou Qixing has found his niche in embroidery. Bold colors, imaginative motifs, complicated yet neatly aligned stitches, it’s pretty hard to believe that these beautiful embroidery pieces are all the work of an autistic 26-year-old man from Songjiang’s Yongfeng Community.

He can sit for a whole day stitching, without an ounce of fatigue. Every morning, Monday to Friday, is Mou’s sewing time in his studio in the community’s Sunshine Home, an institution for people with special needs.

Soaked in a world of silk yarns and threads, Mou is highly concentrated for three to five hours. “If it were not for embroidery, he could not sit down and keep quiet for a minute,” teacher Hu Guiren said. Mou is a veteran embroiderer who can complete two 40cm-by-50cm pieces, in one month, work that could take anyone else several months to finish.

Mou was sent to the Sunshine Home in 2011. “At first the boy often lost his temper and was grumpy and unapproachable,” Hu said. “So we were trying to help him find something he liked doing to express his emotions in a positive way.”

Mou took a great interest in embroidery. At the beginning, he could only finish some simple patterns. The teachers sought cartoon images from the Internet, printed them out and drew a draft for him to stitch.

“Autistic children can learn and learn well if they truly like the thing they are doing,” Hu said. From simple patterns and stitches, Mou gradually mastered much more complicated skills such as color matching, thread twisting and back stitching. The patterns evolved from cartoon images to natural scenery, figures and oil painting subjects.

At the same time, embroidery was good training for him to improve his all-round cognitive abilities. People with autism live in their own world, often refusing to communicate with others, but able to express themselves in other ways.

Mou expresses himself with embroidery. “If he stitches a tree, he needs to first know what a tree is, then understand different tree varieties, and recognize that a tree can take on different colors and features in different seasons,” Hu said. “It’s a whole thinking and understanding process. He might not be able to talk in words, but he can express himself through his stitches.”

Over the years, Mou has grown from beginner to experienced embroiderer, and his work is developing from small pieces to large ones with sophisticated sewing skills in complicated colors. 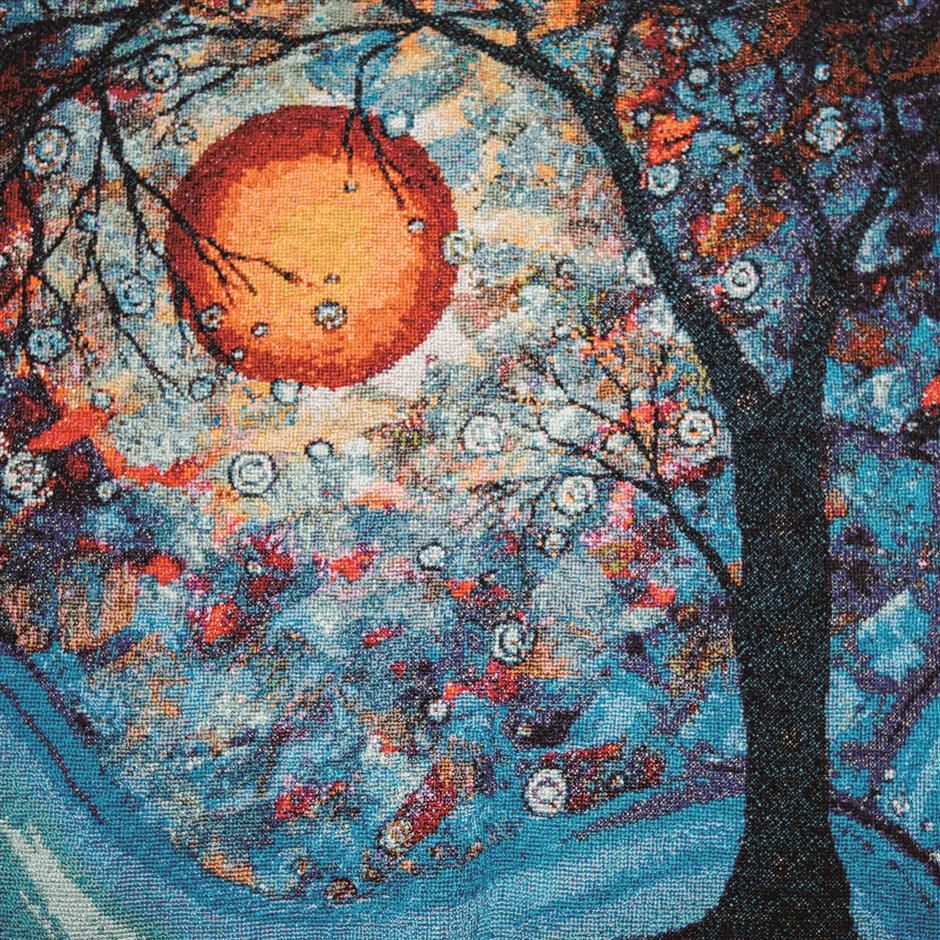 Mou is now a veteran embroiderer who can complete two 40cm-by-50cm pieces, in a one month, work that could take anyone else several months to finish.

He seldom loses his temper and exhibits less abnormal behavior, and occasionally he responds to others. “He’s happy to go out and attend social events now. Last time his parent took him to an exhibition where his work was on display. Mou agreed and didn’t resist anymore,” Hu said.

When Mou finishes his morning’s work, he tidies up the studio and arranges his threads, tools and fabrics in a neat order. In the afternoon, he turns on a computer to play games, or sings out loud to himself.

Mou’s talents in embroidery has attracted attention from the wider community and charity groups. Much of his needlework appears in art exhibitions and decorates the halls of some local companies. “It’s a misunderstanding that all autistic children must have some talent. The fact is they’re patients who need special care and treatment all their lives. Some don’t have the ability to communicate, and even suffer from schizophrenia or low intelligence,” Hu said.

“For their parents, it’s important for autistic children to communicate with the outside world on their own, and keep a happy mind, not some special talents,” he added. 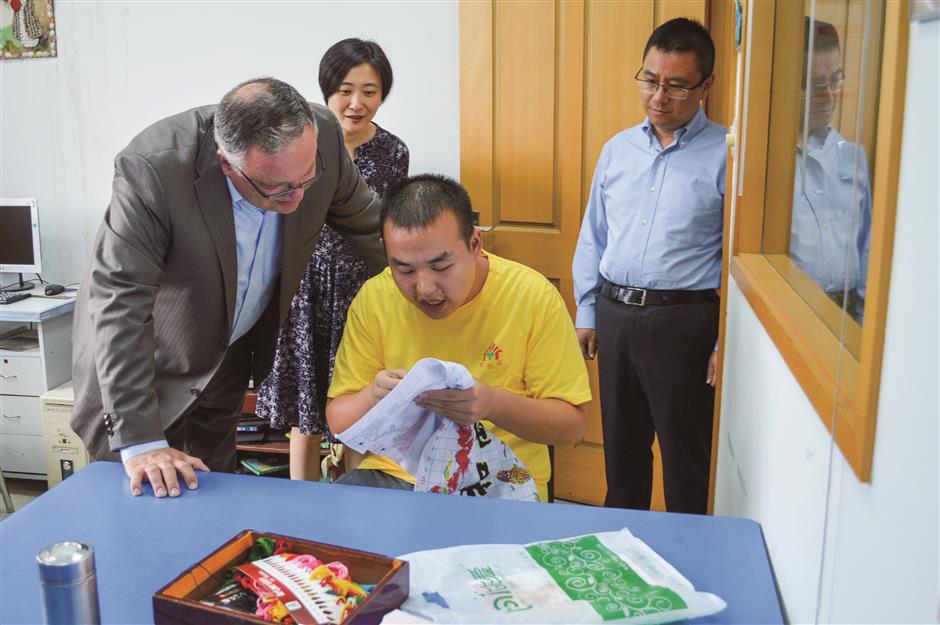 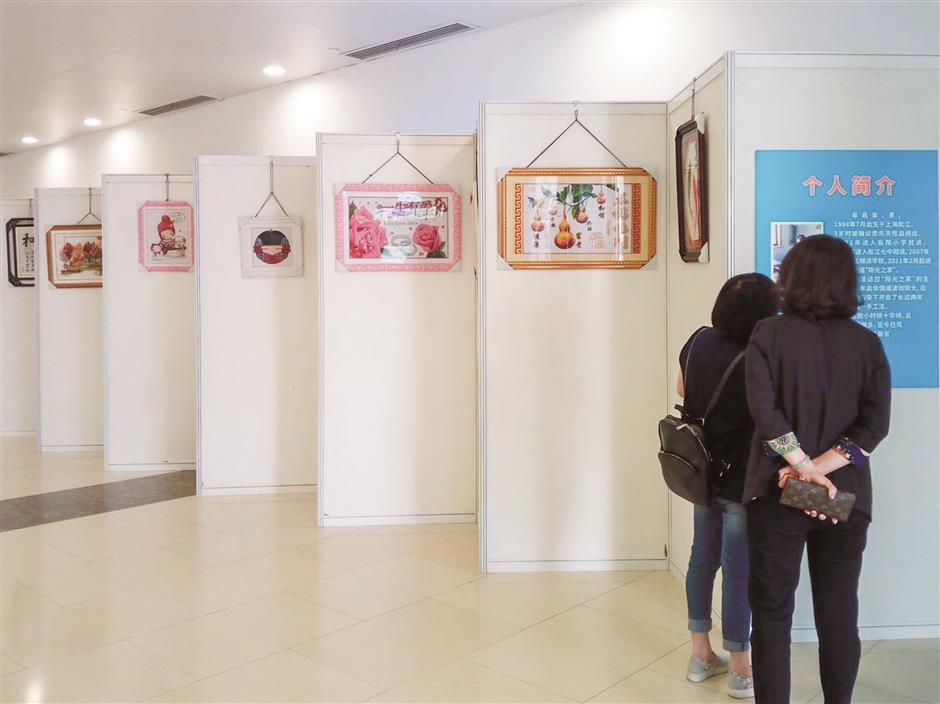 Visitors attend an exhibition where Mou’s embroidery works are on display.