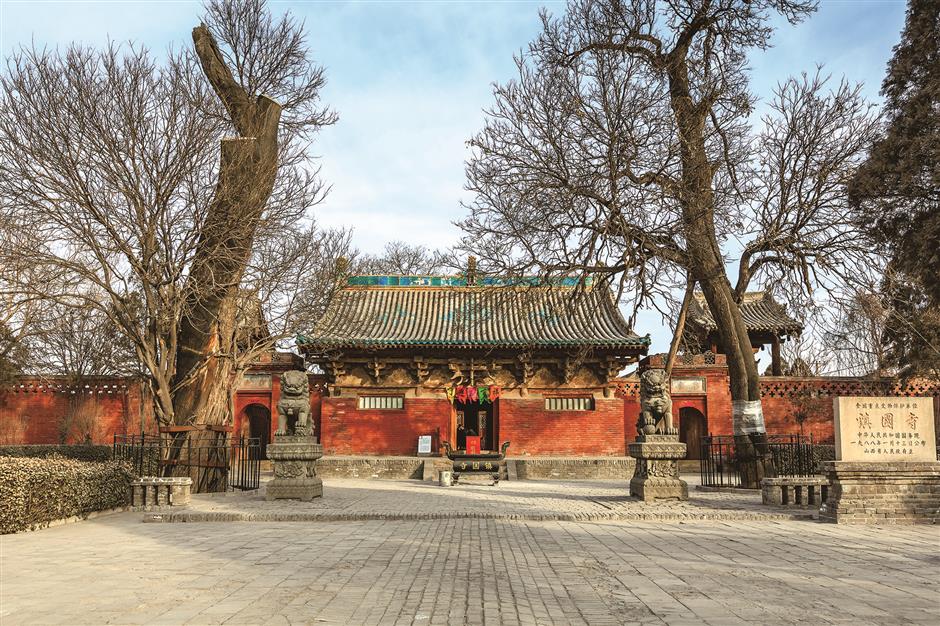 Zhenguo Temple, located in Pingyao County, Shanxi Province, is an ancient Chinese architectural treasure notable for featuring very large brackets that hold up the roof and flying eaves. Remarkably, no nails were used in its construction at all, it was simply built, linked and consolidated by using wood and bricks.

The temple houses 62 painted clay sculptures, over 100 frescoes and more than 20 stone tablets, which perfectly blends Confucianism, Buddhism and Taoism in China. The fairy tale of Lu Ban, the ancient master carpenter who helped build the temple, adds a sense of mystery to the place.

In order to provide a quiet, reclusive place for monks to practice their Buddhist doctrines, the temple was built on a remote mountain. One of the biggest highlights of this Buddhist shrine is its main entrance, a hall with three gates, which represent extrication from the secular world. People could free themselves from trouble when passing through the gates, considered as a boundary between Buddhist and mortal realms.

Wanfo (Ten-thousand Buddhas) Hall in the center of the temple compound is a miracle of ancient Chinese architecture. As the third biggest wooden construction in China, the hall is still standing steadfast and unshakable after more than 1,000 years.

Its original structure constructed in the Five Dynasties Period (AD 907-960) has never been changed, though it has gone through many restoration projects over the centuries.

Its giant roof and eaves are shaped like an umbrella, enveloping the main body, which was rarely seen in hall architecture. The design was to protect the wooden construction from rain, while the big eaves, which would have blocked sunlight, were built up over to increase natural light. Built with hardwood and bricks, the hall strictly followed traditional handcraft techniques without using a nail. The technique employed dougong, a system of bracket sets, which are inserted between the top of a column and a crossbeam.

A Buddha sits on the Sumeru seat laid with blue stone in the heart of the hall. Dignified with a kind smile, he waves a hand to make a gesture of holding a flower, a typical Buddhist expression. Another 13 Buddha statues stand alongside, including the Sudhana, Guanyin Bodhisattva and daughter of the dragon.

A typical Tang-style can be traced on the sculptures — they were all made plump in shape, because being voluptuous was a popular aesthetic at the time.

The Five Dynasties Period was one of the most turbulent, war-ridden eras in Chinese history, so it’s a wonder the hall managed to preserve several colored clay sculptures from that time, the only one among all the country’s temples. It provides precious evidence for studying the development of Chinese sculpture during the Tang (AD 618-907) and the Song (960-1279) dynasties.

On the central axis of the compound sits Tianwang (Heavenly Kings) Hall built in the Yuan Dynasty. The four statues of the kings, remade in the Qing Dynasty, are all fierce-looking, displaying power and grandeur.

The Zengzhang King, ruling the south, waves a sword, while the Eastern Chiguo King embraces a pipa,a four-stringed Chinese lute. The Guangmu King in charge of the west holds an umbrella, while the northern Duowen King takes a tower in his palm. In Buddhism, heavenly kings are the guards of Buddha, and they also preach people to convert to their religion.

On the two sides of the hall, the bell tower and drum tower stand opposite to each other. The bell tower holds an iron bell forged in 1145, one of the oldest treasures of the Pingyao ancient county. The drum is lost to history. In front of the hall there are two pagoda trees: The eastern pagoda is almost 1,000 years old, as old as the temple, which has become a symbol of the ancient construction.