Coins witness the prosperity of the Silk Road

For thousands of years, ancient Chinese transported silk, tea, gunpowder and handicrafts to the West via the Silk Road. In return, Western fruits and crops were sent to China.

Silk was one of the main products which headed to the West, stealing the thunder from the other merchandise and cultures that thrived amidst mutual trade and exchanges. Gold coins are considered the symbol of exchanges along the ancient road.

An exhibition at Gushan Pavilion in the Zhejiang Museum displays over 700 glittering gold and silver coins featuring exotic cultural elements. Visitors can learn about Western cultures and religions from the exhibits on view.

Gold coins are said to have been invented in the Lydia Empire, which was located east of present-day Turkey, around the 7th century BC. These coins were stamped with a lion’s head adorned with what is likely a sunburst which was the king’s symbol. The exhibition displays some Lydia gold coins that are believed to be among the earliest batches in the world. 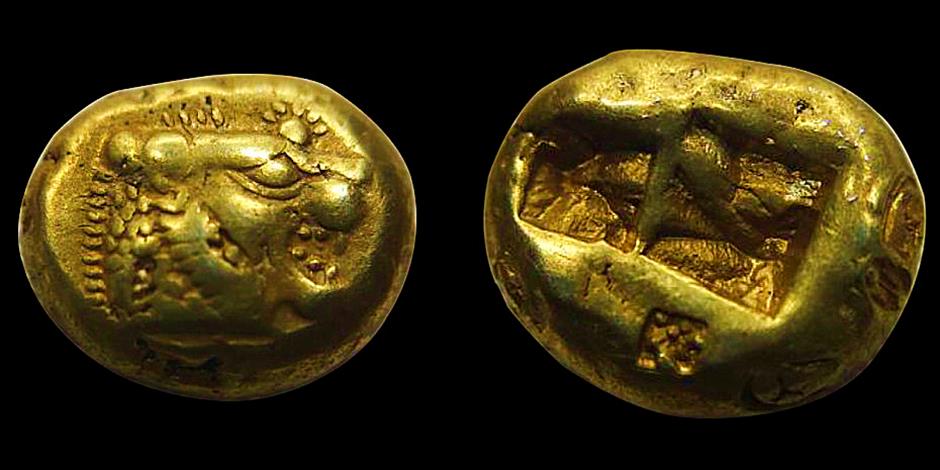 A gold coin is stamped with a lion's head adorned with what is likely a sunburst which was the king's symbol.

The politics and economy in ancient Greece gave a boost to the coin forging industry. Blacksmiths melded animals, plants, landscapes and religion patterns on them, which began to circulate around this country.

Two displayed silver coins are stamped with Athena and olive wreaths. The other sides are engraved with an owl. In ancient Greece, Athena is the guardian of Athens and the goddess of wisdom and useful arts, while owl is the bird that protects Athens. During the heyday of ancient Athens, these coins were hard currencies that witnessed the prosperity of the city.

A silver coin engraved Athena, the goddess of wisdom and useful arts, and an owl, the bird that protects Athens, on the other side is on display.

The styles of coins gradually changed along with Alexander the Great’s military campaign through Asia. Some Indian-style coins on display indicate this.In AD 7th century, Islam spread to the Orient when Arabians conquered the Middle East. And then Arabic letters started to appear on the coins.

The Abbasid Caliphate at Baghdad helped Islamic art and music flourish significantly during their reign. The capital Baghdad began to thrive as a center of knowledge, culture and trade.

During that period, their gold coins, featuring Islamic scriptures, populated around the Europe and North Africa thanks to the high gold content. Some are on view at the exhibition.

Coins from the Abbasid Caliphate in Baghdad with Islamic scriptures

Date: Through November 29 (closed on Mondays)