According to the tale, Liu Suan, a vassal king of the East Han Dynasty (AD 25-220), is summoned to the capital to inherit the throne from his great-grandfather. Before departing, the emperor-to-be asks fortune teller Wan Jiachun if it is to be a safe journey. The seer replies only "fishing joy," without further explanation.

Meanwhile, court General Liang Ji is planning a coup and sends assassins to kill Liu on his way to the capital. At the same time, royal supervisory censor Ma Rong is pandering to Liang by removing honest, loyal court officials from office.

Ma's treachery, however, angers his daughter Ma Yaocao, who writes a poem criticizing her father. In retaliation, he forces her to marry a poor scholar named Jian Rentong.

The innocent but muddle-headed scholar travels by boat to greet his betrothed. He pours out his worries about a loveless marriage to fisherman Wu and his daughter Wu Feixia, who try to comfort him and volunteer to host a small wedding party for the couple.

At the Dragon Boat Festival, Wu and his fellow fishermen drink, sing and dance on a riverside, where the assassins are hunting for Liu. Wu hides Liu in his boat before being killed accidentally by an assassin's arrow. The daughter Feixia buries her father and then finds Liu hidden on the boat. She vows to help him.

General Liang has taken full control of the royal court and orders supervisory censor Ma to give him his now married daughter Yaocao as a concubine.

Sad and desperate, Yaocao asks fisher girl Wu Feixia for advice. Wu is brave. She masquerades as Yaocao and goes to Liang's mansion at night. While dancing at a family banquet, she kills Liang with a poisonous needle and escapes with the help of the fortune teller Wan.

Liu finally takes the throne. Deeply grateful to the fisherman's family, he marries Wu Feixia and makes her empress. The scholar Jian is promoted to become a local governor. His father-in-law Ma is stripped of his court position, but otherwise goes unpunished.

The opera "Fishing Joy" celebrates the bravery and wisdom of the ordinary fisher girl Wu Feixia. Its episodes "Selling Books for Marriage" and "Hidden in the Boat" have been the two most popular performances on stage. 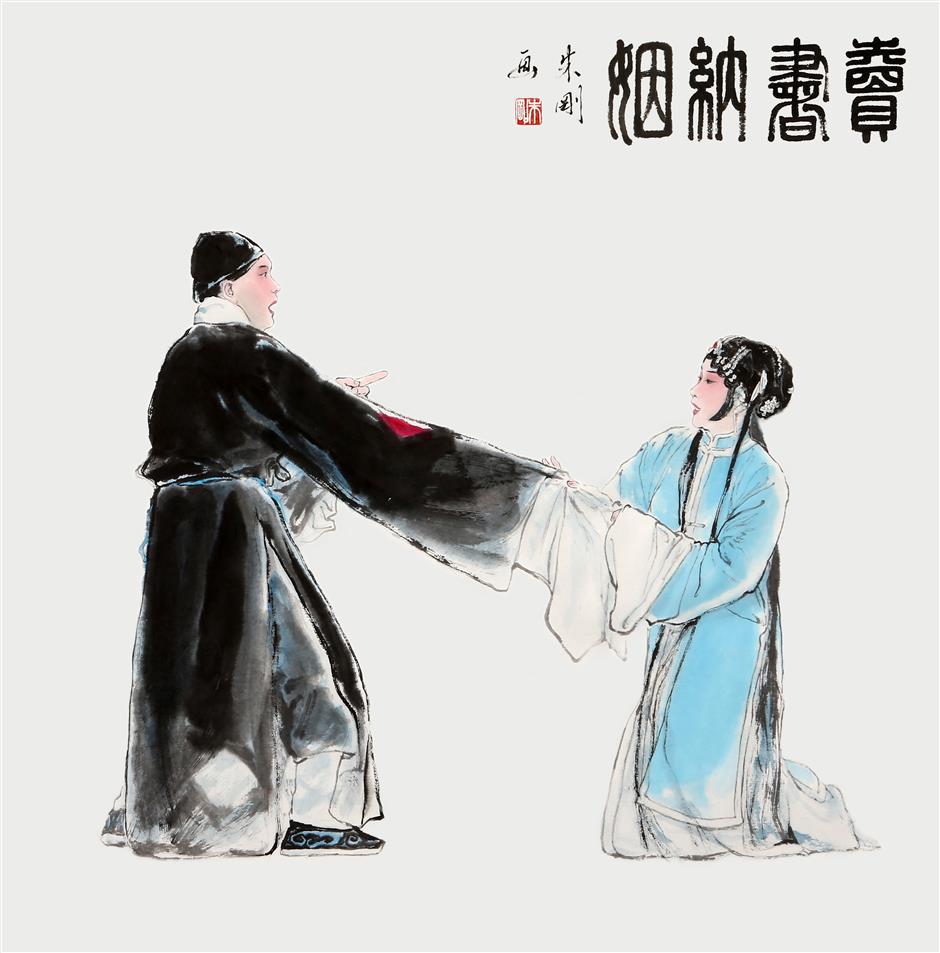 The poor scholar Jian ekes out a meager living by selling books, sometimes accepting a donation from the fishing family. He initially rejects what he thinks will be a loveless marriage to Ma Yaocao but finally agrees. Yaocao comes to admire Jian's diligence and honesty. They fall in love in the end.

His wife is pulling at Jian's clothes, and the scholar is apparently at a loss when faced with the girl's affection. She kneels to show her love is true. With a triangular composition, Zhu dramatizes the scene with rich body languages and exaggerated facial expressions.

But why is it called a "robe of wealth?" According to Chinese philosophy, "the darkest hour is before the dawn." If things are at their worst, they will start to get better. A "robe of wealth," though an emblem of poverty, is also an omen of a happy ending. 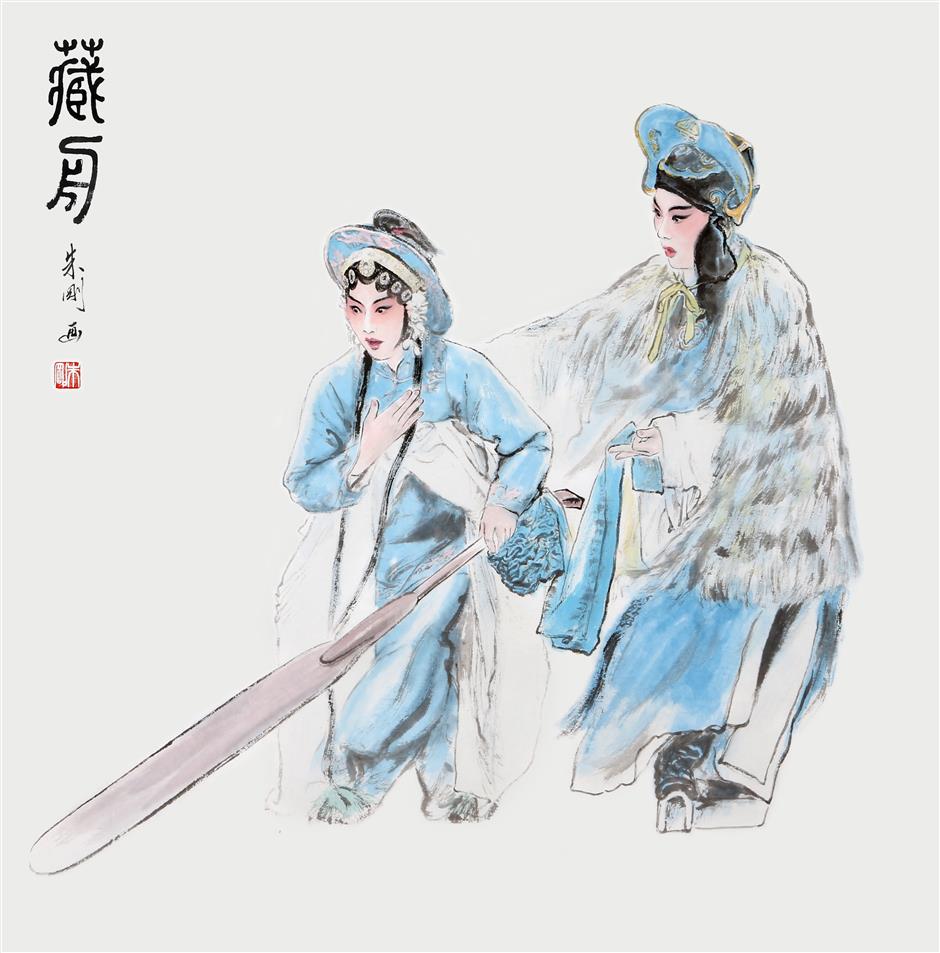 Zhu's painting "Hidden in the Boat" features two leading characters – Wu Feixia wielding an oar like a sword, with Liu Suan behind her.

'Hidden in the Boat'

The fisherman Wu is mistakenly killed by Liang's assassins. When his daughter finds the emperor-designate Liu hidden in the boat, she swears to help him take the throne and exact revenge on the mutinous general.

The episode is an act featuring the two leading characters. Zhu's picture has the daughter Wu standing in the front of the boat and Liu hiding behind.

The beautiful fisher girl holds an oar like a sword in her hand, embodying the change from any ordinary girl into a swords-woman challenging life and death. By contrast, Liu, the future emperor, shows complicated expressions on his face – admiration, gratitude and cowardice. The rocking boat symbolizes his inner anxiety, underscored by his wild gesticulations.

﻿
Special Reports
﻿
61945
,
Old fish tale provides bait for opera intrigue
Young artists show their expertise in classic genres
Ethnicity doesn't determine musical talent
The New Year's posters with messages of reforms
Spanish surrealism that breaks all the rules
Artworks evoke ambivalence toward change in city
Artist takes a novel approach to lacquer
Exhibition explores intersection of art, space and humans
A wave or not a wave, that is the question ...
Finding inspiration in things small and public
EXPLORE SHINE