In 1993, Metro Line 1, the city's first subway line, reached Xinzhuang, then part of the Shanghai suburbs.

Dramatic changes have taken place in Xinzhuang over the past decades under the rapid urbanization process, which has seen the mushrooming of new apartment buildings for the newcomers to the city.

The exhibition "Transition," currently under way at X SPACE in TODTOWN – a large, comprehensive transitional hub in Xinzhuang, focuses on this special phase of development.

Rather than provide a contrast between past and present or a nostalgic touch toward the vicissitudes, the exhibition aims to reflect the mixed feelings of those who have witnessed these changes.

The exhibition has invited a range of artists, such as an author, architect, a type designer, photographer and local history expert to provide their insights into the changes taking place there.

Some of the artworks are quite thought-provoking, such as Li Zhiqian's installation titled "Bǐ Cǐ," or "Now and Then, Here and There."

The work features paving stones in a container – in the form of the Chinese character Bǐ (彼, then and there) on the ground. On closer inspection, visitors will find words spray-painted on some of the stones, evoking a strong sense of cognition and imagination.

According to Li, these are the names of the 167 villages that disappeared in Xinzhuang in the 1990s during the urbanization process. These names simultaneously form a contrast to a metal plaque in the form of Cǐ (此, now and here) standing on the other side, which is stuck with the names of today's residential neighborhoods in Xinzhuang, mirroring the changes over the years.

"Paving stones is the fundamental construction material, whether in railway pavement or house building. Such simple and pure material actually becomes a part of the history of Xinzhuang through 'transit-oriented development,'" said Li.

Another highlight of the exhibition is "Shanghai 2021," created by sound artist Yin Yi. The artist invites visitors to run on a treadmill while listening to 60 different sounds he has recorded across the city over the past 10 years. 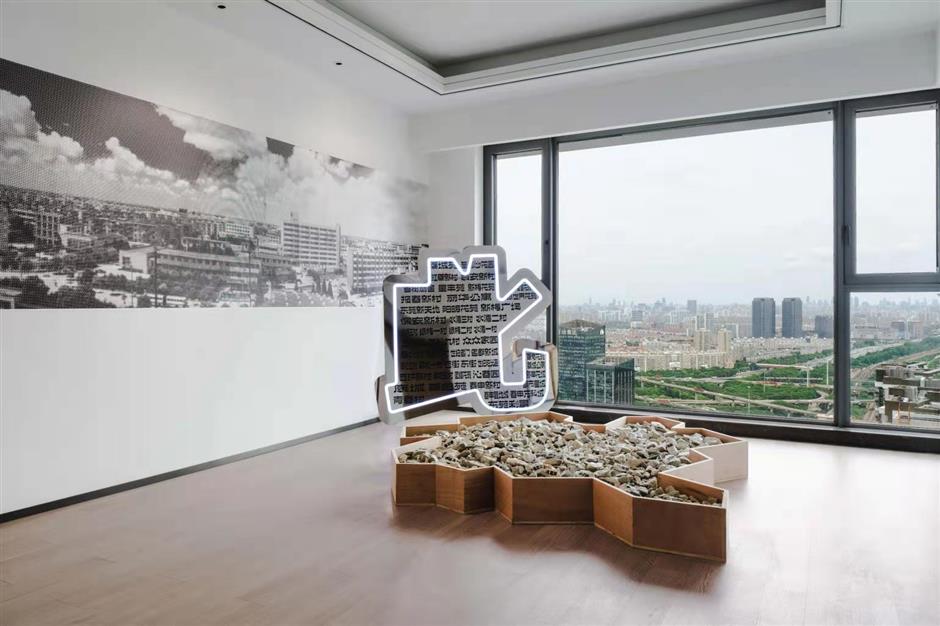 ﻿
Special Reports
﻿
Artworks evoke ambivalence toward change in city
Artist takes a novel approach to lacquer
Exhibition explores intersection of art, space and humans
A wave or not a wave, that is the question ...
Ink-wash artists to benefit from dual exhibition program
How calligraphy collides with Kunqu Opera
Chen's pioneering watercolors on display
Display features ancient celadon pottery craft of porcelain master
The secrets of the grandmaster of wisteria
The Art and Design Academy tells 'red' stories to honor the CPC's centenary
EXPLORE SHINE