The New Year's posters with messages of reforms

An exhibition featuring nearly 50 New Year's posters on loan from the private collection of the Shanghai Propaganda Poster Art Center is under way at the Liu Haisu Art Museum through August 6.

All the posters were created from 1950-53 to mark the coming of the Chinese New Year, and spread the news of the founding of the People's Republic of China in 1949 and the ensuing reforms and new laws set to change people's daily lives.

"At a time when the printing press, radios and other social media were not yet the primary means of spreading news, these New Year's posters served as a 'cutting-edge' tool for communication and publicity, as they could be quickly printed and distributed in large quantities," said Yang Peiming, 75, collector and founder of the poster art center.

Produced solely for use during Chinese New Year, the traditional New Year paintings, known as nianhua, are woodcut-printed. It is a tradition for households to replace the old nianhua on their walls and doors with new images of popular deities and tutelary spirits for good luck and fortune in the coming year. 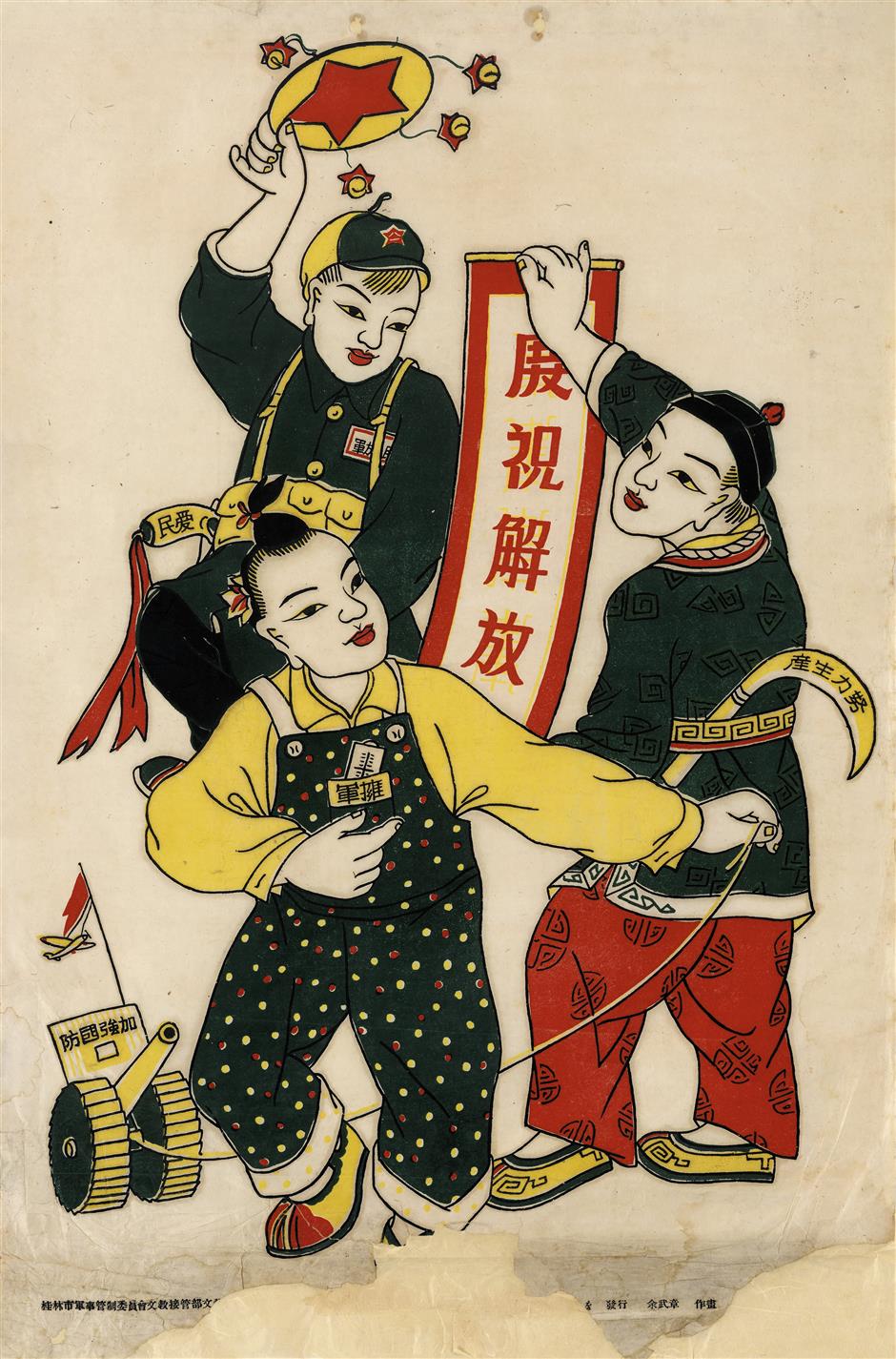 "Celebrating the liberation" by Yu Wuzhang, 1950

To make good use of the most festive time of the year, a group of preeminent painters at that time were mobilized to create the New Year's posters, including Chinese landscape painters Li Keran and Lu Yanshao, oil painters Zhang Ding and Yu Yunjie, cartoonist Zhang Leping and watercolor artist Shen Roujian. They broke artistic boundaries and added new elements to the traditional art form, resulting in so-called New Year's poster art.

The themes of the New Year's posters vary from celebrating the birth of New China, land reform and the new marriage law. They also aimed to create a cheerful mood and positive attitude toward reading, studying and working with one's own hands for a healthy, wealthy and happy new year. 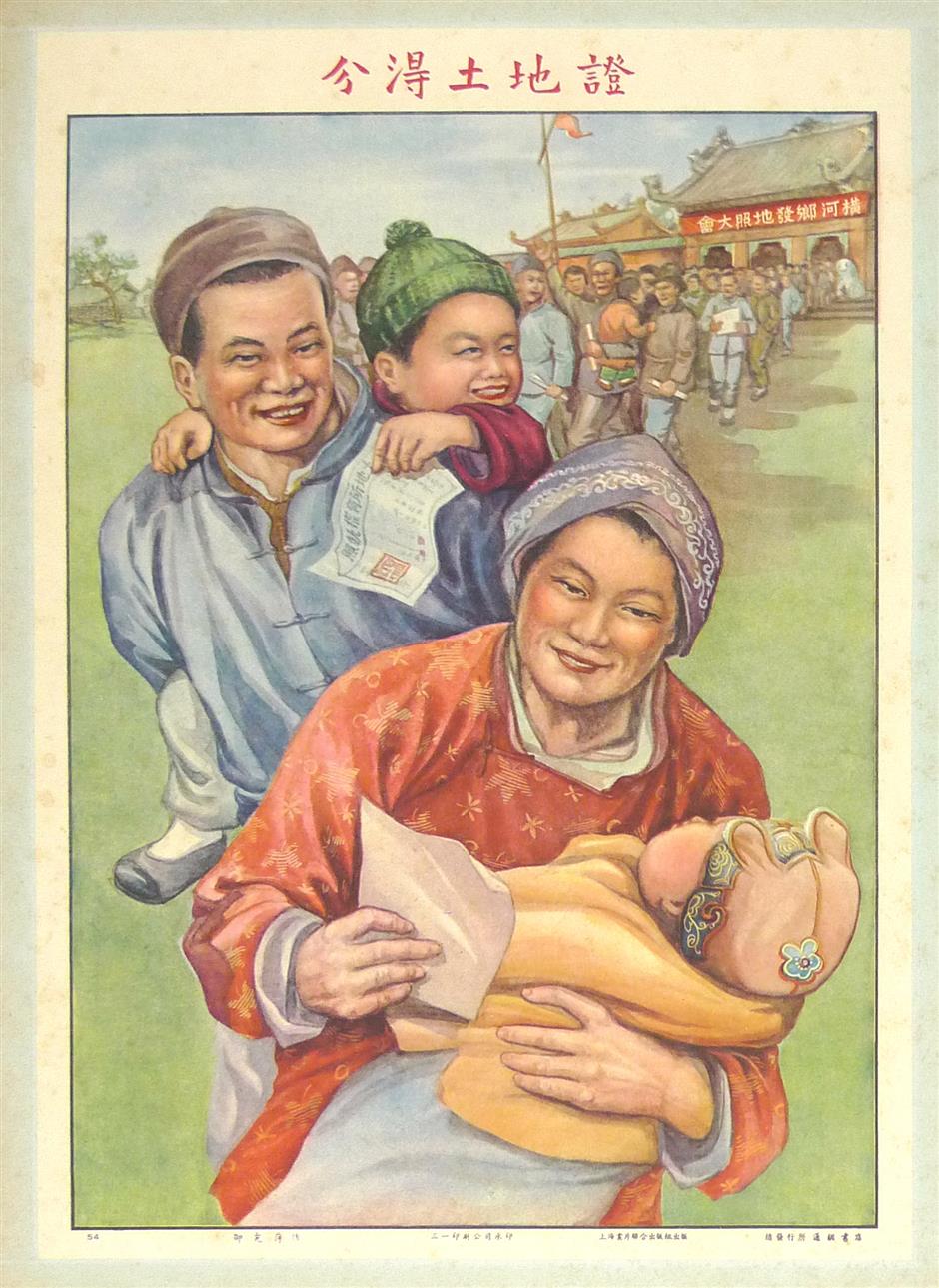 "Get the land certification" by Shao Kepin, 1950

One exhibit depicts the scene of farmers who are all smiles with the land certification in hand. After 1949, land reform was the first political movement.

In another titled "Marriage no longer arranged," a couple is registering for marriage at the local civil administration office, while another couple on the other end of the table is getting divorced.

The new Marriage Law was the first basic law passed in the People's Republic of China on May 1, 1950.

It was a radical change from the existing patriarchal Chinese marriage traditions, and needed constant support from publicity campaigns.

It makes lawfully clear that marriage based on the free choice of partners, monogamy and equality between men and women shall be applied; the lawful rights and interests of women, children and old people shall be protected.

For the first time in China's history, females broke free of old constraints and were held up as equals. 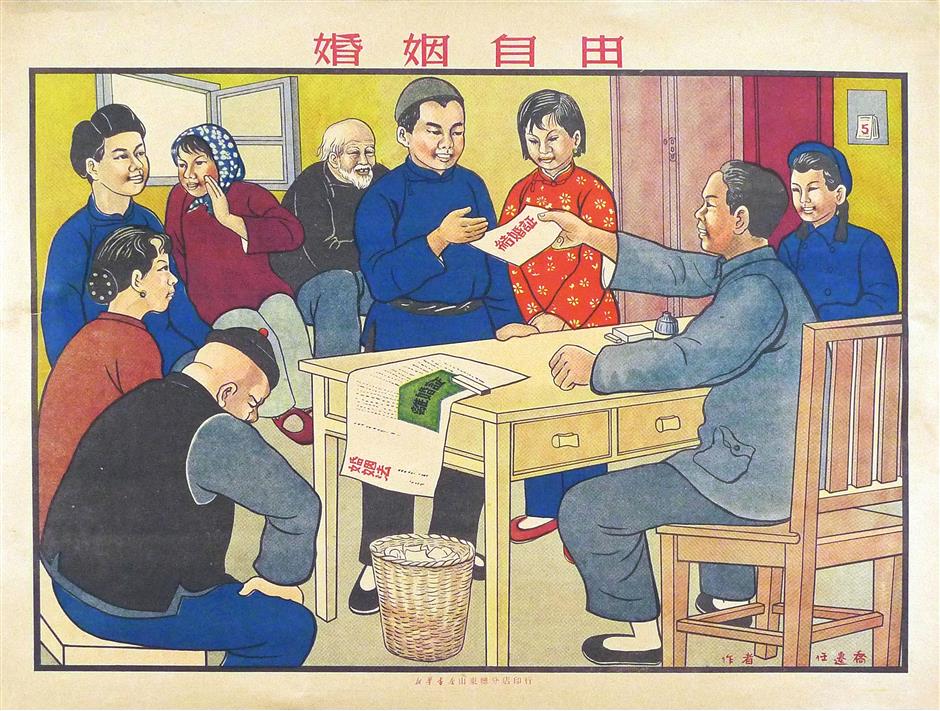 ﻿
Special Reports
﻿
The New Year's posters with messages of reforms
Spanish surrealism that breaks all the rules
Artworks evoke ambivalence toward change in city
Artist takes a novel approach to lacquer
Exhibition explores intersection of art, space and humans
A wave or not a wave, that is the question ...
Ink-wash artists to benefit from dual exhibition program
How calligraphy collides with Kunqu Opera
Chen's pioneering watercolors on display
Display features ancient celadon pottery craft of porcelain master
EXPLORE SHINE