Early in the coronavirus pandemic, South Korean-American violinist Jennifer Koh propped her mobile on a bookshelf, set it to record and started playing in her living room.

Now, more than a year later, she has become something of a pro in virtual and livestreaming concerts as she awaits a full return to the performing stage. Her only two live appearances so far this year were at the outdoor Restart Stage of Lincoln Center in New York.

Chinese bass Peixin Chen, a native of Inner Mongolia, had his first post-pandemic performance in February with Palm Beach Opera. Then, in April, he sang the role of Don Basilio in Rossini's "The Barber of Seville" in a "drive-in" opera performance with the San Diego Opera. Singing on a stage in the parking lot of a sports arena while audiences watched from their cars was a career first for him.

For Asian musical artists on the world stage, performance schedules disrupted by coronavirus aren't the only career bane. Many of them have had to battle discrimination against Asians in a classical music world long dominated by Westerners.

Chen and Koh have been lucky. Many artists still haven't returned to work at all, with some forced to wait tables or do delivery jobs to make ends meet. The truly discouraged have simply given up on music careers.

Koh was flying back to New York after a tour in March 2020 when she started receiving a lot of calls. One after another, her scheduled concerts were being canceled because of coronavirus.

Initially, it was "utter panic," she told Shanghai Daily by phone. Then she began to count herself lucky.

"I feel very grateful that most of my concerts were delayed, so I still have them coming up," she said. "But I realized that many younger colleagues haven't been so lucky. They might have been looking forward to their first performance with an orchestra and it got canceled altogether." 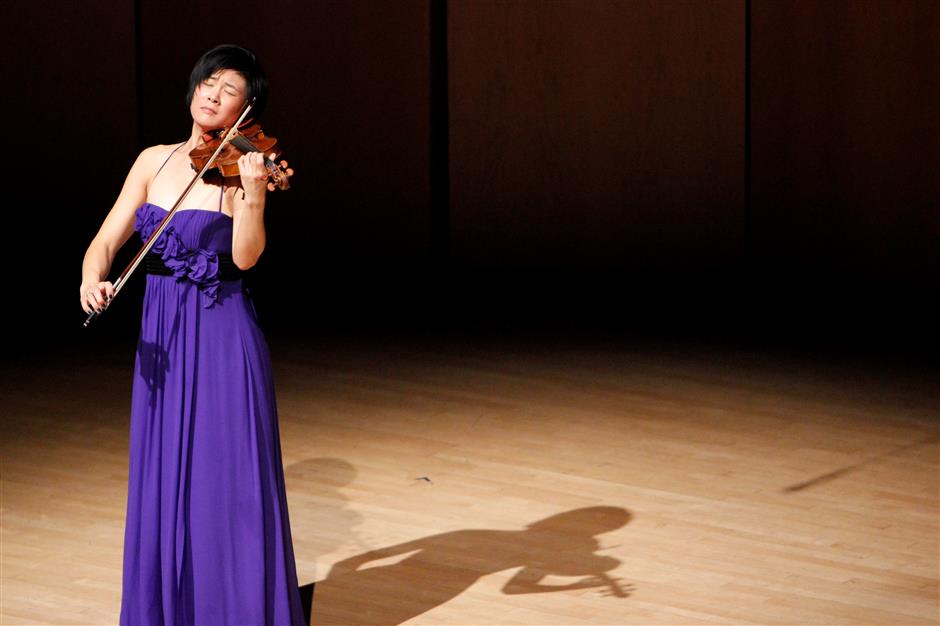 Koh was born to South Korean parents in the US state of Illinois in 1976. She studied at Oberlin College and then the Curtis Institute of Music in Philadelphia. She won a silver medal at the 1994 Tchaikovsky Violin Competition. She has been lauded for her interpretations of the Bach violin repertory and has performed with major orchestras around the world.

Chen, who studied at the Central Conservatory of Music in Beijing and recently graduated from the Houston Grand Opera Studio, has performed with the New York Metropolitan Opera and other distinguished companies with a repertory that includes roles from operas by Verdi, Donizetti, Mozart and Wagner.

Eleven of the productions he was scheduled to sing in were canceled in one year because of coronavirus.

"Basically, my career was stagnant," he told Shanghai Daily in an e-mail interview.

Chen and Koh haven't given up.

In April 2020, Koh launched "Alone Together" to commission works for solo violin from young freelance composers. Forty works have been composed and performed online, with a recording to be released in August. Once musical halls reopen, she said she hopes audiences will be able to hear the works live.

"Concerts are beginning to return but not always as we have known them," she said. "There are artists and musicians who are still struggling. I expanded 'Alone Together' to include more commissions for young freelance composers. Whenever I'm able to perform these works, the composers are able to receive money."

Koh isn't alone in feeling that the tentative return to stage performances has been far from feeling "normal."

Chen said his performance in the drive-in opera was a career first.

Chen said he remained connected to music during the pandemic hiatus by giving virtual vocal lessons for students in China. It's an endeavor he said he plans to continue. 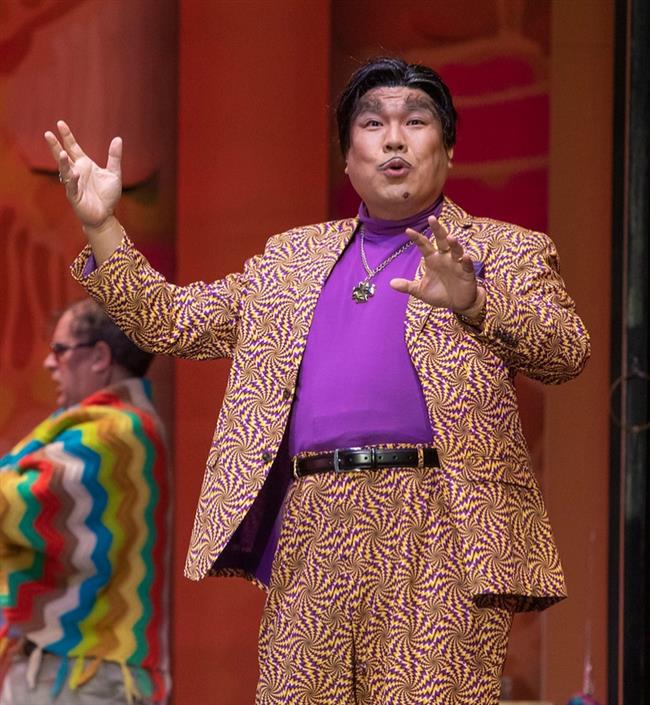 Bass Peixin Chen is Basilio in San Diego Opera's production of "The Barber of Seville."

For Koh, virtual performances were entirely new. Now she is pondering where she may be able to utilize the video-editing skills she acquired during the pandemic. In addition to collating videos for "Alone Together," she has completed a music film for Carnegie Hall's Voices of Hope Festival.

For the video, Koh collaborated with bass-baritone Davone Tines to distill the history of Asian-American oppression and highlight the untold story of solidarity between Asian Americans and the black community.

"There was rhetoric used that blamed Asians for the pandemic," she said. "I think the climate in the US is changing because the leadership has changed, but I don't think it has changed the mindset of all Americans. It has affected how people, how American see each other."

For Asians and classical musicians of Asian descent, careers have always been fraught with difficulties. They are often stereotyped as diligent, technically perfect but soulless when it comes to interpreting works rooted in European culture.

Most recently in June, renowned violin maestro Pinchas Zuckerman apologized after reports that he told a pair of students of Asian descent that their playing was too perfect and they needed to add some soy sauce.

"The words I used were culturally insensitive," the virtuoso performer later explained.

Koh knows the pain. In a 2008 book by Mari Yoshihara, Koh recounted awkward encounters with Europeans who expressed surprise that performers of Asian descent can play what they regard as "their music."

"That attitude is not limited to the United States," she said. "Sometimes I think it's believed throughout the world. When people say a musician is great because they are German or they studied in Germany, the implication is that they just know how to play a classical piece better than someone from a different background. It's a form or racial discrimination."

Koh, of course, rejects such stereotypes.

Asked in an interview about difficulties facing Asian artists in classical music, Chen replied: "Opera singing or any kind of performing career is hard, especially for Asians. I just want to say: 'Work hard, be positive and good luck!'"

Koh said she feels it's her responsibility to speak out.

"I've had great mentors who opened doors and fought for my place in classical music," she said. "Now I need to make things better for the next generation."

The future might well be better, she said, in a broader sense of post-pandemic creativity, citing Stravinsky's "The Soldier's Tale," which premiered in 1918 during the deadly Spanish influenza outbreak.

"His intention was for a small troop of artists to go from town to town and perform the piece because of the pandemic," she explained. "There was such an explosion of creativity after that pandemic, in terms of art, music, philosophy, architecture ... Before that, everybody was busy all the time, and then suddenly the entire world stopped."

She added: "What I do believe is that as artists, we are always imagining a different world. So I think coming out of this pandemic, we have to rely on artists to imagine the next world, a better world."

﻿
Special Reports
﻿
Ethnicity doesn't determine musical talent
The New Year's posters with messages of reforms
Spanish surrealism that breaks all the rules
Artworks evoke ambivalence toward change in city
Artist takes a novel approach to lacquer
Exhibition explores intersection of art, space and humans
A wave or not a wave, that is the question ...
Ink-wash artists to benefit from dual exhibition program
How calligraphy collides with Kunqu Opera
Chen's pioneering watercolors on display
EXPLORE SHINE