China was one of the first countries to domesticate horses. As an important part of Chinese civilization, the longstanding horse culture reflects the relationship between human beings and the animal, a symbol of leadership, faithfulness and vigor.

In May, 1981, a gilded bronze horse was discovered in an ancient tomb in the Douma Village of Xianyang in Shaanxi Province, where hundreds of people were working on the construction of an infrastructure project.

Knowing the news, archeologists rushed to the site. The location of Douma Village is special because it is near Maoling Mausoleum, which is the tomb of Emperor Wu of the Han Dynasty (206 BC-AD 220).

Known as the "Chinese Pyramid," the mausoleum is the largest tomb built during the Han Dynasty. It also took the longest to build – 53 years – and contains the most valuable funeral objects.

Surrounding the emperor's grave are more than 20 smaller tombs, which belong to former members of the emperor's court, including the military generals and politicians Huo Qubing (140-117 BC) and his uncle, Wei Qing (unknown-106 BC), and Lady Li as well, one of the emperor's favorite concubines.

Among the tombs, the mound of No.1 nameless grave is the largest, measuring 95 by 64 by 22 meters. The locals called it "sheephead mound" due to its shape. 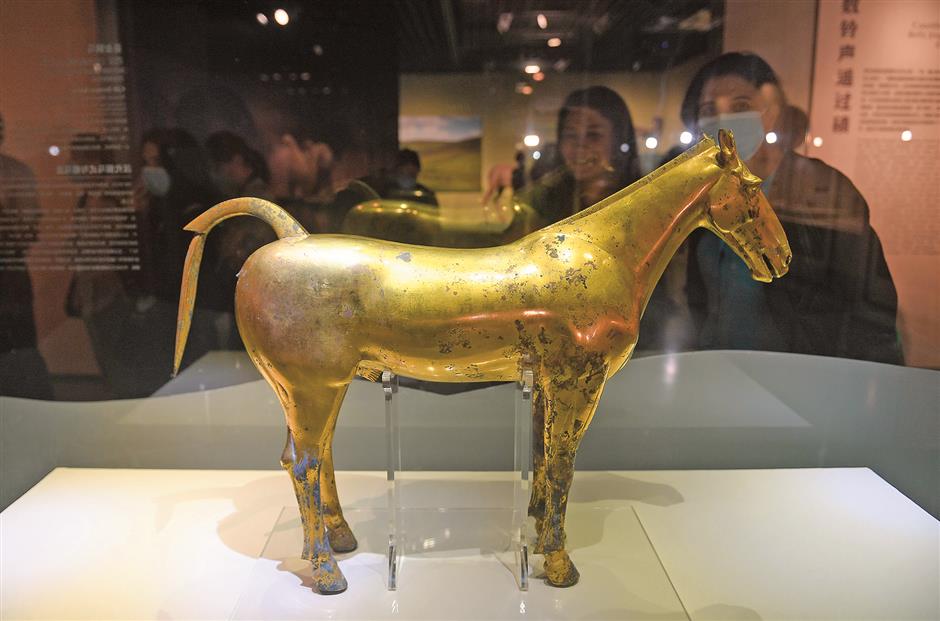 The gilded bronze horse unearthed from an ancient tomb dating back some 2,100 years is on display.

More than 200 artifacts, including bronze, iron, lacquer and lead wares, were unearthed from the pit, which was about 4 square meters. Among the cultural relics, the most eye-catching is the gilded bronze horse.

Weighing 25.55 kilograms, the horse statue is 62 centimeters tall and 76 centimeters long. It is the largest of its kind ever found in China.

The horse has a thick, muscular body. Holding its tail up, the steed slightly opens its mouth with six teeth exposed. Its ears stand upright with the mane between them. The life-like artifact also features an anus, which also serves as a vent hole. Through the vent hole, one can see that the gilded statue is hollow.

Based on its slender body and muscles, some experts believe its prototype is Ferghana, which Emperor Wu called "heavenly horse." Ferghana were imported by the emperor from the country of Dayuan in central Asia. In fact, a war broke out between the two countries just because of the horses.

These tall, beautiful horses were probably the ancestors of a number of modern breeds renowned for their speed and endurance. With the powerful horses, the military capabilities of the Han Dynasty improved.

Although there is no stone slab bearing the name of the tomb's occupant, experts suggest it belonged to Princess Yangxin based on the inscription on the unearthed artifacts. The princess was the elder sister of Emperor Wu.

She was commonly referred to as Princess Pingyang due to her first marriage to the Marquis of Pingyang, who died shortly after their marriage. The princess then married Marquis of Ruyin, who would break the law and commit suicide for fear of punishment.

The princess' third marriage was to the military general Wei, brought together by Emperor Wu of Han. The couple actually knew one another for a long time. Wei's sister Wei Zifu was recruited as a singer at the princess' estate before she encountered the emperor and later became an empress. Wei also served as a servant in the princess' palace.

The princess' third and last marriage lasted for more than a decade. After Wei's death in 106 BC, the princess never remarried. Emperor Wu sent the gilded bronze horse to his sister and was buried with her.

The national treasure is displayed at the Maoling Museum in Xianyang.