Philosophical reflections on nature of time

Confucius (551-479 BC) once said as he stood beside a river: "Time flows away like the water in the river."

"Inclusive Break: A Time Beside Many Other," an exhibition running at Liu Haisu Art Museum through December 26, explains the meaning of time and gets the audience to feel the erosion of time through the artworks.

The exhibition features 32 works created by six female artists from Berlin and Shanghai, rendering their philosophical reflections on the nature of time.

The China-Germany artistic exchange program, which commenced in late 2019, enables artists from both countries to extend and deepen their investigations into and discussions about the proposition of time in reality through artistic interactions – starting with simultaneous live-streamed pop-up exhibitions in Shanghai and Berlin that took place on November 8, 2020, and ending with the current exhibition.

"China and Germany, both boasting historical traditions and cultural legacies, have a series of great philosophers and thinkers," said Bao Weihua, the director of Liu Haisu Art Museum.

"Three Chinese artists and three German artists responded to the theme of 'inclusive break' about temporality with respective cultural backgrounds, artistic experiences and creative practices. They asked the same question: If behavior might be stopped by brief pauses and rest, can thoughts be stopped at the same time?"

In fact, the perception of time is highly individual and different between cultures, and inner clocks not only tick differently in Berlin and Shanghai but also from one person to another.

Three Chinese artists – Gao Shan, Zhou Yinchen and Kang Qing – produced artworks that reflect their philosophical thinking, the significance of time, artistic aesthetics and female consciousness by using mediums that fuse with time elements or recorded artistic creations under the flow of time. Their forms of expression, including sculpture, pottery and painting, unveil a more emotional and poetic side of the creation process.

For example, Zhou recorded her particular memories of 2020 in her landscape "Series 1-12." She used a relatively cool color palette and large panel shapes, rendering a feeling of frozen time that characterizes the ongoing pandemic.

Likewise, Kang represents her idea of time "flow" and "break" in a number of measurement cylinders. On the 19th of every month between 2019 and 2021, she has filled a measurement cylinder with 500ml of tap water. The water evaporates as the temperature and humidity fluctuate, but neither the evaporation time nor the traces left behind are the same. Thus, the seemingly fixed amount of 500ml creates its individuality with distinct variables. 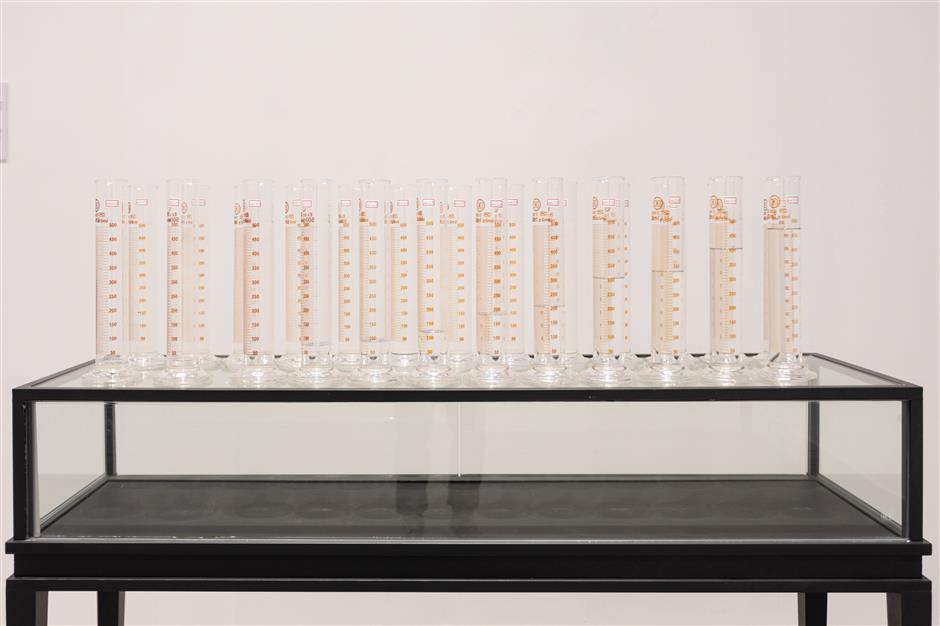 The three German artists – Stella Geppert, Saskia Wendland and Nicole Wendel – conducted discussions and tests about temporality more in the form of physical involvement and behavior, and unscrambled the relation between time and artistic practice through the continuity of artistic behavior and thinking, probing the thematic concept after a pause.

For example, "Coredrawing#10," a graphite on paper work created by Wendel, suggests a space of undefined depth in which an airy substance seems to proliferate, as if the painting is breathing.

In fact, Wendel formed the basis of her artistic research following her choreographic and improvisational training in dance and performance.

As such, her work is closely connected to bodily functions and activities. Handprints are clearly visible, composed with carefully placed layers of lines that express different qualities of time as a kind of musical score or experimental diagram.