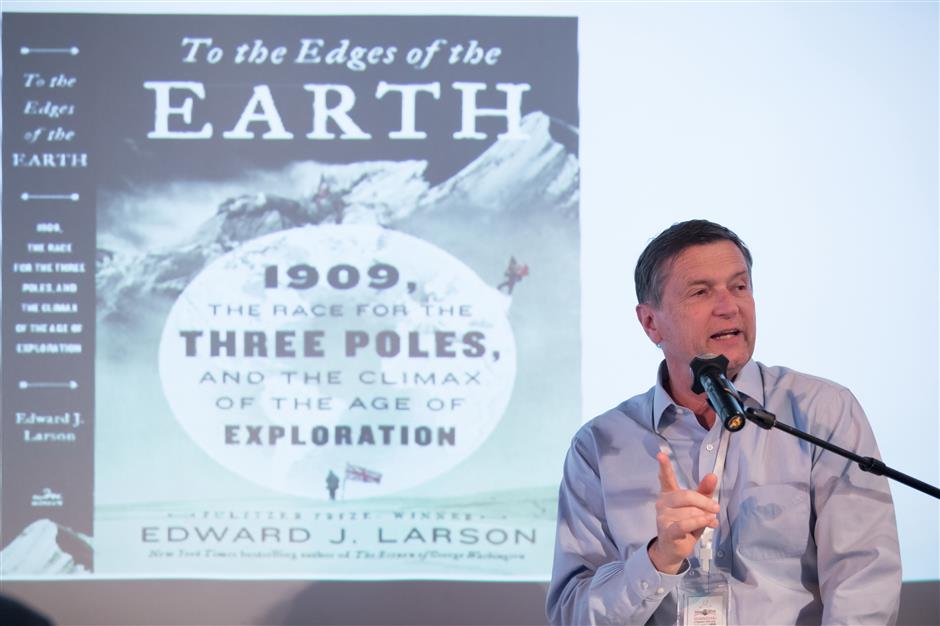 The LitFest at M on the Bund is in full swing. The week is chock-full of authors sharing their knowledge and experience about writing and have some exciting books to share with the public.

The week includes Chinese authors from all over the country as well as a smattering of international authors. A wide range of topics were discussed, everything from the East-West culture gap to poetry.

Professor and author Stephen Brusatte delighted children and adults alike with the culmination of years of research on the age of dinosaurs.

His book “The Rise and Fall of the Dinosaurs,” is a captivating account of life over 65 million years ago.

Brusatte took questions from the audience about his book and research to explain the lives of dinosaurs. He also went on to explain why China has become a dinosaur hot spot in the paleontology world.

Brusatte is impressed by the great work being done by Chinese paleontologists, but equally importantly, there are many people in the country on the ground looking for dinosaurs.

Brusatte took many questions from kids curious about their favorite prehistoric creature.

One boy asked, “how do we know for sure it was an asteroid that killed the dinosaurs?”

“Well we definitely know there was an asteroid. We have the crater and we can date the asteroid,” Brusatte explained.

He confirmed that fossil records of dinosaurs correspond with the impact of the asteroid.

Next was Pulitzer Prize winner Edward J. Larson introducing his book, “To the Edge of the Earth: A Race to the Poles,” which chronicles the adventures of Ernest Shakleton, Robert Peary and the Duke of Abruzzi as they simultaneously raced to the top and bottom of the Earth.

This exciting year, 1909, had all three men making their journeys to places where no one had yet ventured. The harrowing tales are cataloged in rich detail by Larson.

The three men faced danger, mutiny, and freezing weather, but as Larson said in his talk, it was their leadership and courage that propelled them to accomplish these feats.

Robert Peary in particular nearly lost his legs to frostbite and did in fact lose three toes on a previous failed journey to the North Pole. As he was making his way to the pole, he encountered another explorer that he believed was trying to beat him to the finish line.

Paranoid that victory would be snatched away from him he pressed on in sub-zero temperatures against the advice of his companions to reach the next checkpoint on his journey.

Through sheer force of will, he made it to the fort that was his destination but lost three toes in the process.

Although he failed to reach the pole on this trek, his next venture was a success along with Shakleton and the Duke in the same year.