Hello, Matti! Why are Finns such introverts? 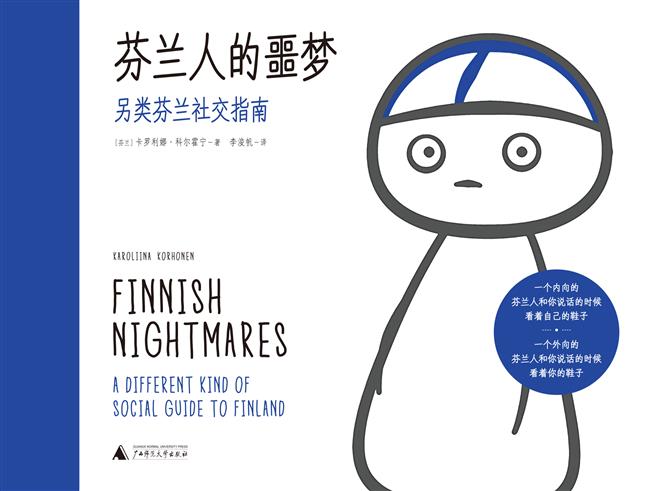 The cover of “Finnish Nightmares”

Finnish graphic designer Karoliina Korhonen was puzzled and curious when she first learned her comic book “Finnish Nightmares” was well-received in China.

Many Chinese readers felt resonance with the book, which hilariously depicts embarrassing moments experienced by Finns, who are commonly considered introverts.

“Finland as a whole is easy to be thought of as introvert, and Finns are considered shy because our culture is one where we value private space very much,” Korhonen told Shanghai Daily on her recent book tour in Shanghai.

“And we also give space to other people,” she added. “We don’t go around saying ‘hi’ to strangers because we don’t want to interrupt them. And that can be taken as introversion.”

The graphic designer first drew the story of Matti, the book’s protagonist, to share with her foreign friends how Finns respond in various scenarios.

For example, when a girl hugs Matti, he thinks she is interested in him whereas she is just saying “hello.” Or, when Matti pretends to be busy when he sees a colleague approaching for small talk.

“I knew very little about Finland before I saw some drawings from this book,” said Wu Xue, 21, who found many scenarios in the book familiar with her own experiences. “Then I realized I might have a little Finnish inside the Chinese me.”

She added: “Many of my friends and I consider ourselves ‘sociophobes,’ in the sense that we are not good at small talk or networking. And it’s quite encouraging to see a book that makes such embarrassing moments so funny and cute.”

It was actually an embarrassing moment that inspired Korhonen to do the book. An Irish friend of hers one day asked if she were OK, which she interpreted as the friend’s concerned that she might be sick or unhappy.

“But he told me it was just him saying ‘hi,’” the author recalled. “And I thought that was probably quite a common experience for Finnish people.”

She started drawing on social media platforms, and her popularity there led to the publishing of the book, followed by two sequels.

“I have gotten many reviews saying: ‘I know someone like that’ or ‘I’m like that,’” she said. “There is this idea that it’s embarrassing to be an introvert and that you should work on becoming more extroverted. But in Finland, it is so tied into our culture. Nobody thinks it’s weird or should be changed.”

During her tour in China, the author got to thinking about what would happen to Matti if he visited such a populous country.

“It will be quite fun to see what happens and how he reacts,” she said.