As this year's Shanghai Tourism Festival centers on visiting historical buildings and taking tours across the city, many Jiading residents set out to learn about the district's culture, history and development during the National Day holiday.

"Although we live in Jiading New City, we rarely have the chance to explore and appreciate the beauty of the district," said Sun Haiyan, who was taking photos on the observation deck of Shanghai Poly Grand Theater with her nine-year-old son. Since the beginning of autumn, Sun and her family have been taking strolls along Yuanxiang Lake in the cooler weather.

The kaleidoscope-shaped Poly Grand Theater designed by renowned Japanese architect Tadao Ando has facades decorated with round and hearted-shaped caves that hide a slew of passageways to the stage. As night falls, the exquisite intersection of architecture and water creates a moonlit serenity, as visitors enjoy the view from the waterside terrace and grass lawn. 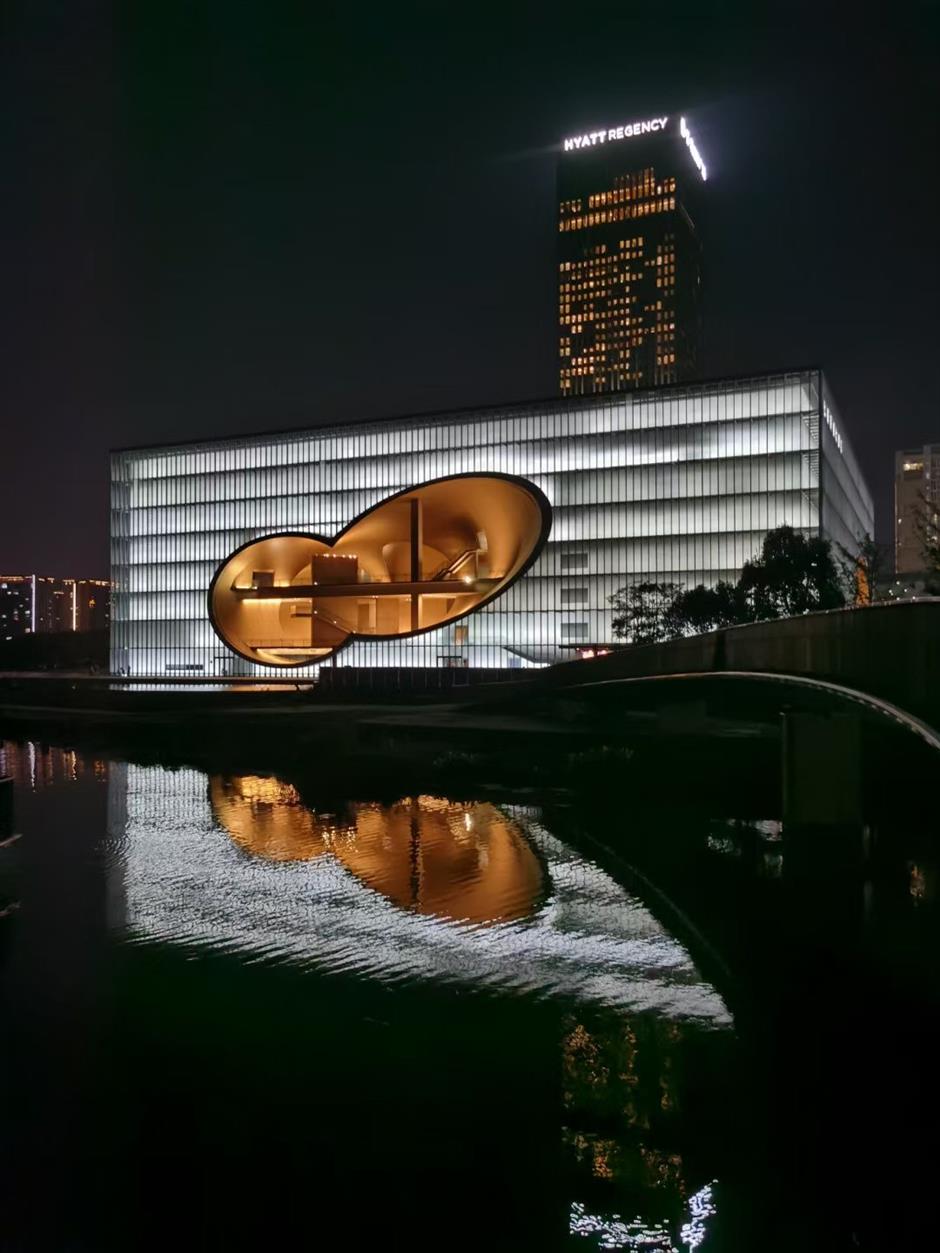 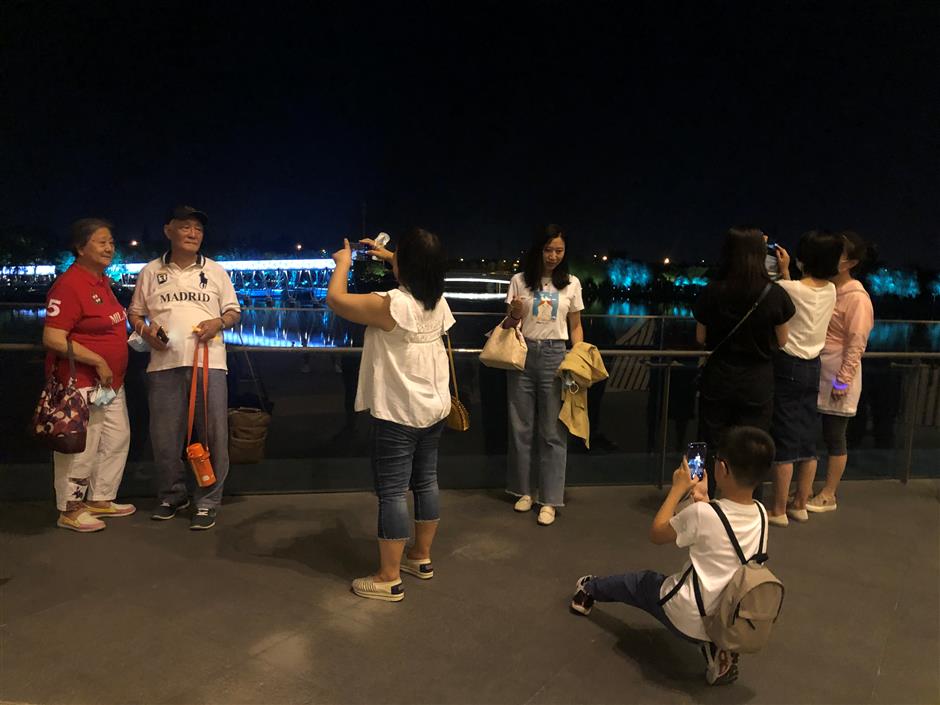 Residents mark the beauty through their cellphones.

For some people, the elegant and less well-known scenic spots are the more ideal destinations. The Wo Jia Cultural and Creative House, which opened last May, is located in the Juyuan Finance Town which has 20 Hui-style watertown houses with white walls and dark blue roofs and each courtyard featuring distinct layouts that create unique spaces and views.

During the National Day holiday, the Juyuan Finance Town hosted a series of events – from Han clothing experience to traditional craftsmanship – that attracted more than 300 visitors. 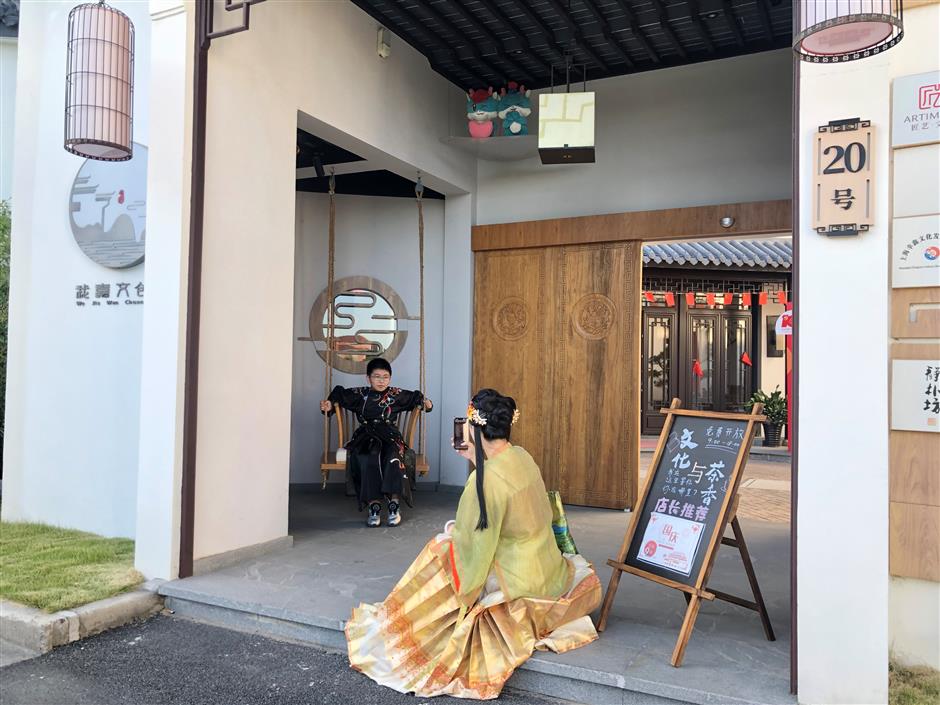 A mother takes picture of his son, both wearing Han clothing, in front of the Wo Jia Cultural and Creative House.

For this year's Shanghai Tourism Festival, the Jiading District Travel Public Service Center held activities to encourage children to take strolls and get to know the city. They walked to historical cultural landmarks such as the Confucius Temple, with guides telling ancient tales and explaining the fine designs.

"The immersive experience let the children feel the new rhythm of the ancient city with 800 years of history, and my daughter and I have learned so much from the tour," said Zhuang Xuanshi, mother of third-grader Li Linxi, who joined one of the walking tours. 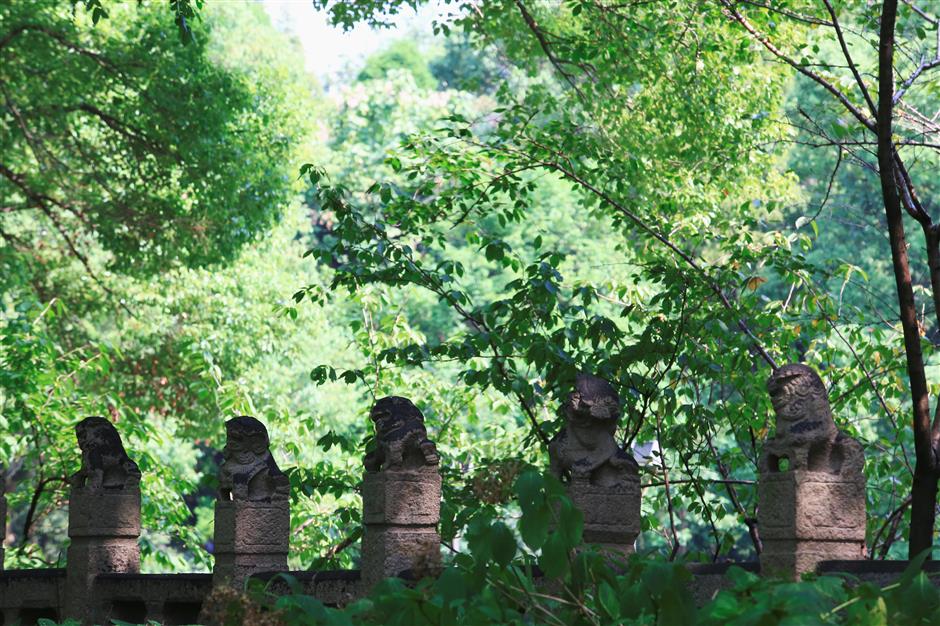 A corner of the Confucius Temple in Jiading

An oasis in the city inspired by blend of cultures

Shanghai has attracted big names to settle down here since its opening up as a commercial harbor 150 years ago.

Century-old mansions can be found all around the city – some of which have become popular sightseeing destinations.

But Huang's Garden in Jiading District is not very well-known even to locals.Built in the 1920s in today's Xinghuo Village, the mansion is like a small botanical garden. In and around it, more than 200 plant species, many of which come from abroad, grow freely.

The owner of the mansion was Huang Bohui, co-founder of the Eastern Times newspaper, which was published in the city from 1904 to 1939.

Huang, who often traveled overseas when he was young, was a botany fanatic. He wanted to build a venue that could not only house his precious trees and flowers, but also hold press conference and cross-cultural events.

Also close to Lingfeng River, it was convenient to reach by either train, car or ferry, so Huang believed this location was ideal for his dream mansion.

The mansion and garden combine Western and Chinese styles of architecture and layout. Surrounded by rivers, the mansion was once connected to the outside world with just a wooden suspension bridge leading to the main gate, making it resemble a medieval castle. 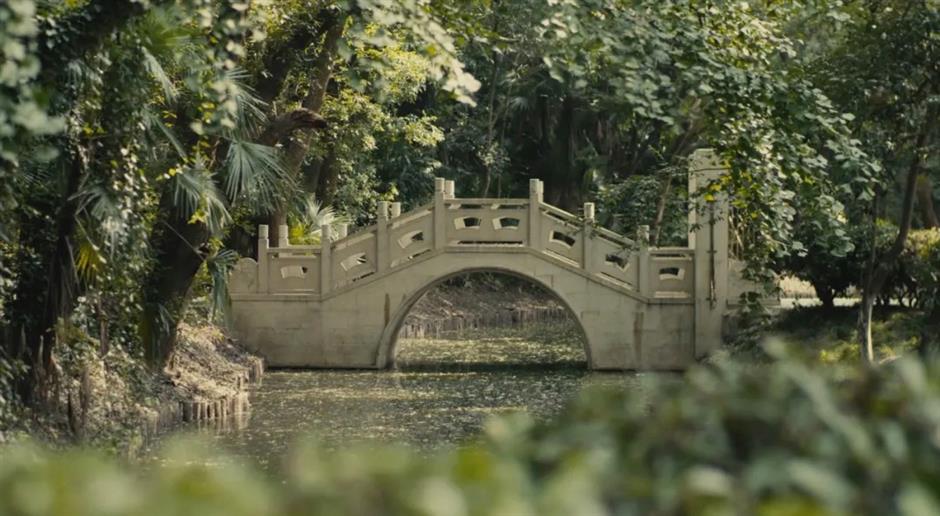 A wooden suspension bridge leading to the main gate makes the garden resemble a medieval castle.

Past the main gate sits an American-style villa. It is believed the villa – with its white walls and red bricks – was inspired by beach houses Huang saw in the United States.

It had its own electric generator which Huang brought back from the US. The style of the garden, centered by a pond full of lotuses, was more Chinese. A small camphor forest was Huang's favorite place to walk with his guests.

Today, after a thorough restoration, Huang's Garden is open to the public. It is like an oasis in the city. When you enter it, the hustle and bustle are left behind. Exuberant trees and thick bushes make it much cooler and quieter, which is one reason why it has become a favorite among Jiading locals. 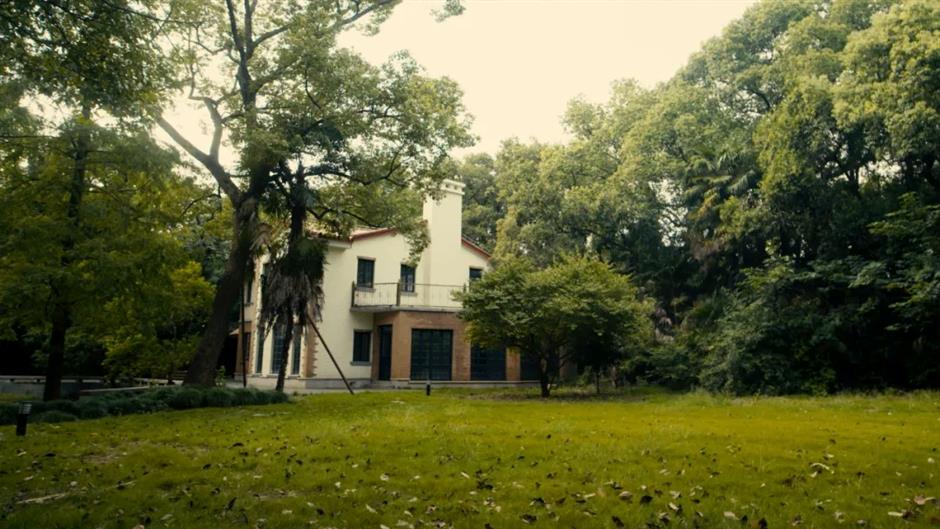 Exuberant trees and thick bushes make the Huang's Garden much cooler and quieter.

Providing a glimpse of area's past prosperity 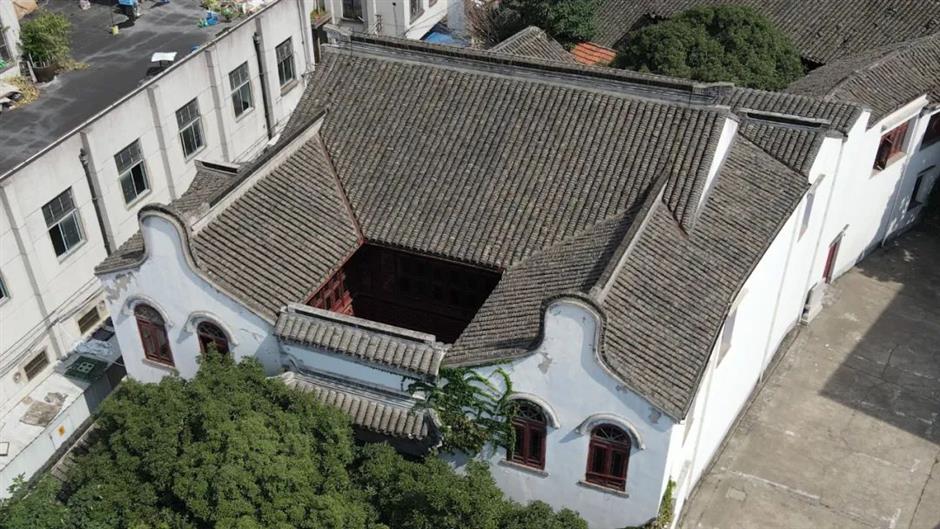 Covering an area of more than 1,000 square meters, the Yin family's house in Loutang ancient town in the north of Jading was built at the end of the Qing Dynasty (1644-1911).

Located at 169 Nanxin Road, the residence provides people with a glimpse of the area's past prosperity.

Built along the Hengli River, the residence is an example of traditional dwellings in Jiangnan (the regions south of the lower reaches of the Yangtze River).

The owner of the house was Yin Youmo (1836-1915), one of the pioneering entrepreneurs in Jiading. The native of Loutang was a significant shareholder and general manager of The Commercial Press. Yin's overseas experiences enabled him to introduce many Western elements to the design of the residence.

The decoration and features of the house, such as the colorful glazed tiles laid on the front porch and mechanical well in the backyard, combine Chinese elegance and Western romance.

In traditional Chinese architecture, the door between the front yard and main hall is called yimen (仪门), literally "the door of etiquette." The Yin family's yimen is solemn and decorated with many exquisite patterns, indicative of the family's prominent status. 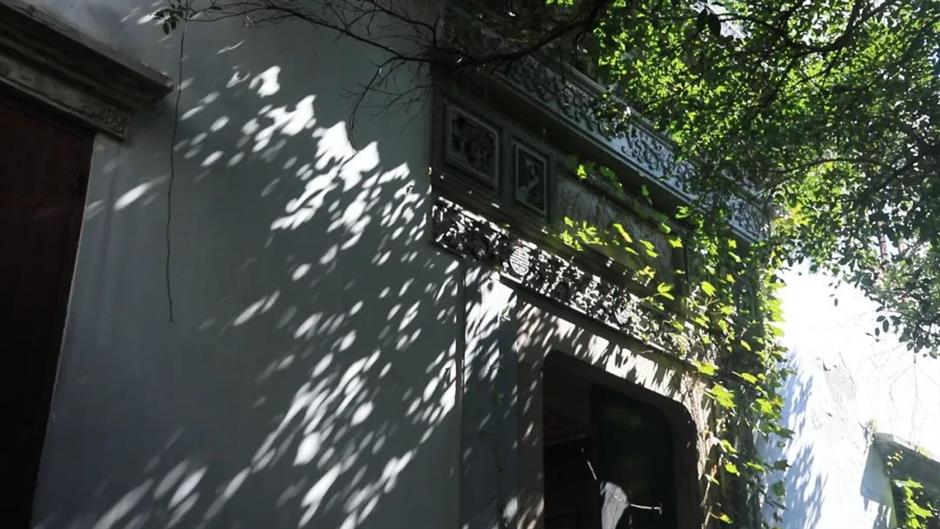 The Yin family's yimen, literally "the door of etiquette," is solemn and decorated with many exquisite patterns, indicative of the family's prominent status. 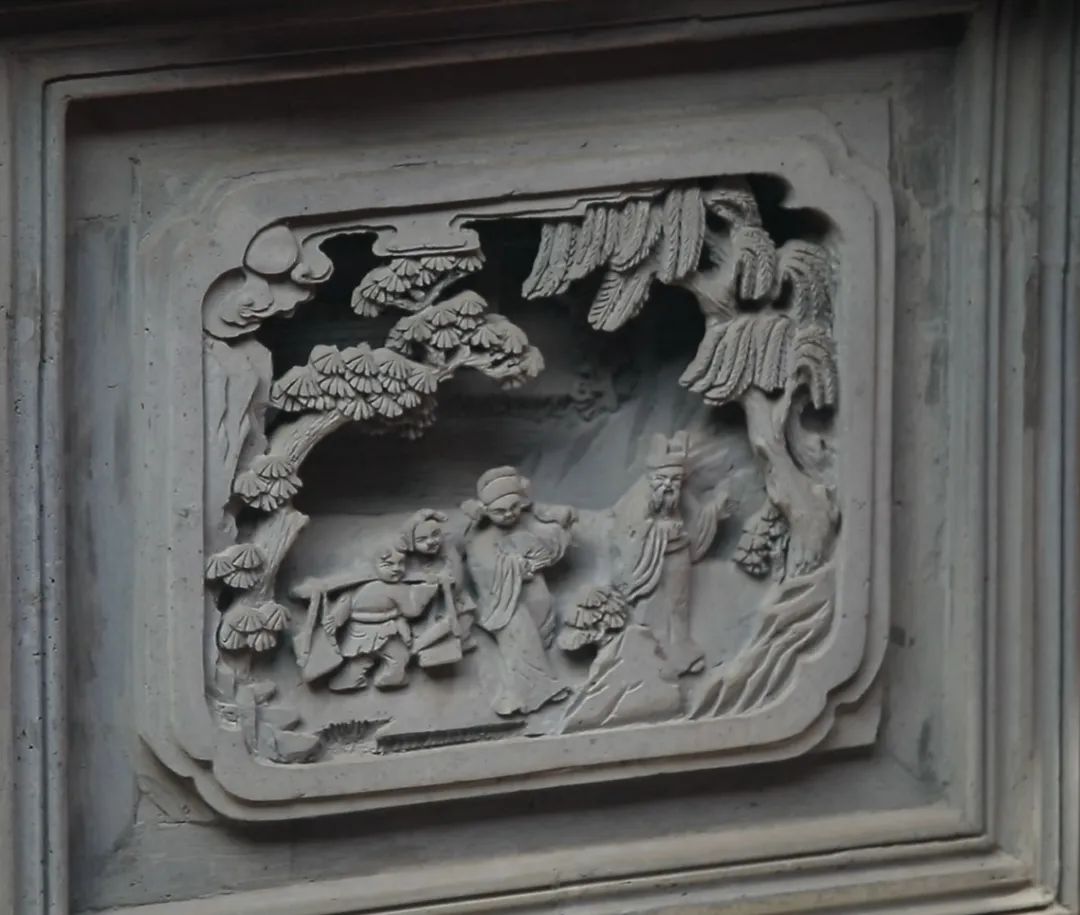 The corridor on both sides provides people with shade from the sun and protection from the rain. Adorned with several windows with unique shapes, the corridor not only plays a useful role but also adds beauty to the general scenery.

On the second floor, there is a hexagonal pavilion which allows people to have a rest and enjoy the view. The air corridor on the west side connects the wing room and rooftop garden.

The garden, which was rare at the end of the 19th century, was the only one of its kind in Jiading at the time. An arched door stands amid the air corridor.

After around 100 years, a pair of osmanthus trees still stands peacefully in the front yard of the Yin family's house, permeating the air with sweet scents now.