“Red Poppies,” a play based on Tibetan writer Alai’s representative novel “Red Poppies: A Novel of Tibet,” is staging in the city.

Through tomorrow, the play has been presented by the Sichuan People’s Art Theater at the SAIC Shanghai Culture Square, following its successful national tour that included Beijing and Hangzhou.

The original novel, published in 1998, was a bestseller and won the coveted Mao Dun Literature Prize in 2000, which is China’s top literary prize.

After its premiere in Beijing, Alai spoke highly of the drama’s artistry and richness in emotions. He said that the drama stays very true to the novel.

Set in the middle of the 20th century, the epic novel about Tibetan customs and traditions chronicles the waning days of the once-powerful Tibetan chieftainship and the rise of a new world.

It has also been translated into more than 10 languages and adapted into TV series and dance drama.

Some viewers compare it to a Tibetan version of “A Dream of Red Mansions” as both novels center on the fall and demise of a big family from its prime days.

The script of the play was written by famous playwright Cao Lusheng who kept the poetic language and appeal of the novel in the 215-minute theatrical adaptation.

Fierce battles for power and stories of love, revenge, and transmigration are interwoven in the script to explore humanity, destinies of ordinary people and the essence of life.

From a distinctive perspective of aesthetics, he offers audience an immersive experience to learn about the vicissitudes and historical changes of human society.

The stage is made of seven creative performance spaces for different scenes. More than 200 sets of costumes and Tibetan accessories are specially prepared for stunning visuals.

Its music combines diverse elements of folk instruments, Tibetan ballads, and Electronic to portray a world that is mysterious and thought-provoking to many people.

Industry insiders have also witnessed a rising trend of Chinese theater in recent years. Avant-garde elements were common to see in former productions such as “Rhinoceros In Love.”

But now realistic epic literary works have become new inspiration for dramas. The large fan base of the novels has helped many stage productions to be hits.

“Red Poppies,” according to Zhang Ligang, president of Joyway, is a tribute to the great era we’re now living in. 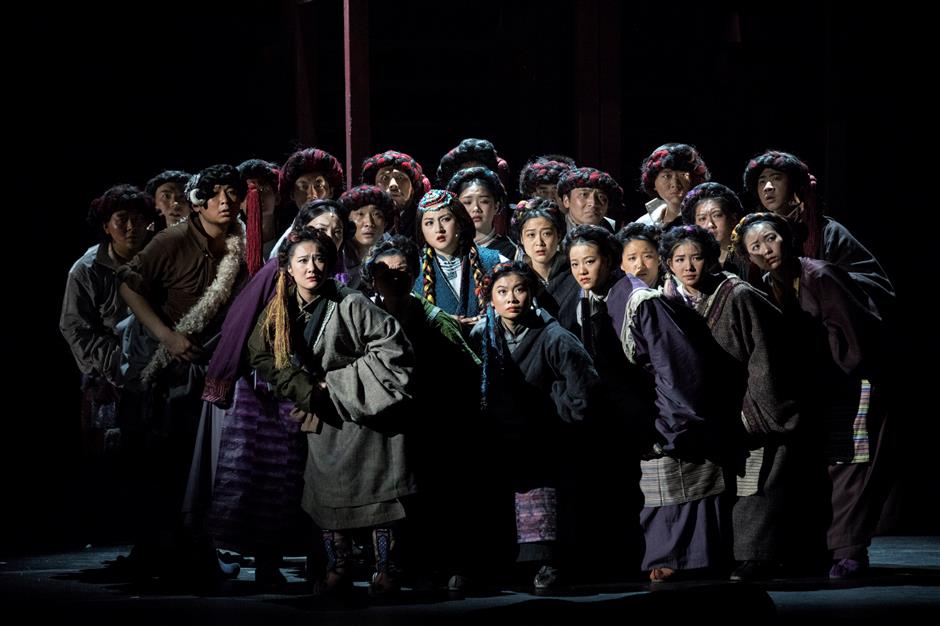 A stage scene from “Red Poppies”

﻿
Special Reports
﻿
Dancers delve deep into their roles as revolutionary heroes
Performance brings alive flavor of Tibetan classic
Chinese film 'Sister' continues to lead China's box office
Documentary a profile in courage in battle against COVID-19
Detective Conan sleuths his way back to cinemas next week
New film captures one woman's road to self-discovery
New Shanghai Disney show set to illuminate the park
'Homage to Mahler,' a musical great
Legacy of the League of Left-Wing Writers
Time is of the essence in atypical concert
EXPLORE SHINE