SSO to focus on Asian works and youth

Ink was barely dry when Shanghai Symphony Orchestra announced a heavily revised new season's program last August. However, this year the orchestra's director Zhou Ping was more relaxed and confident to announce 102 concerts and events for the 2021/22 season spanning September to next July, with more to come.

The program, with a major focus on Asian works – with more than 30 percent of the composers from China, will see the orchestra's artistic director Yu Long opening the season with a concert featuring repertoires from its latest Deutsche Grammophon release – Mahler's "Das Lied von der Erde" and Ye Xiaogang's "The Song of the Earth" on September 4. 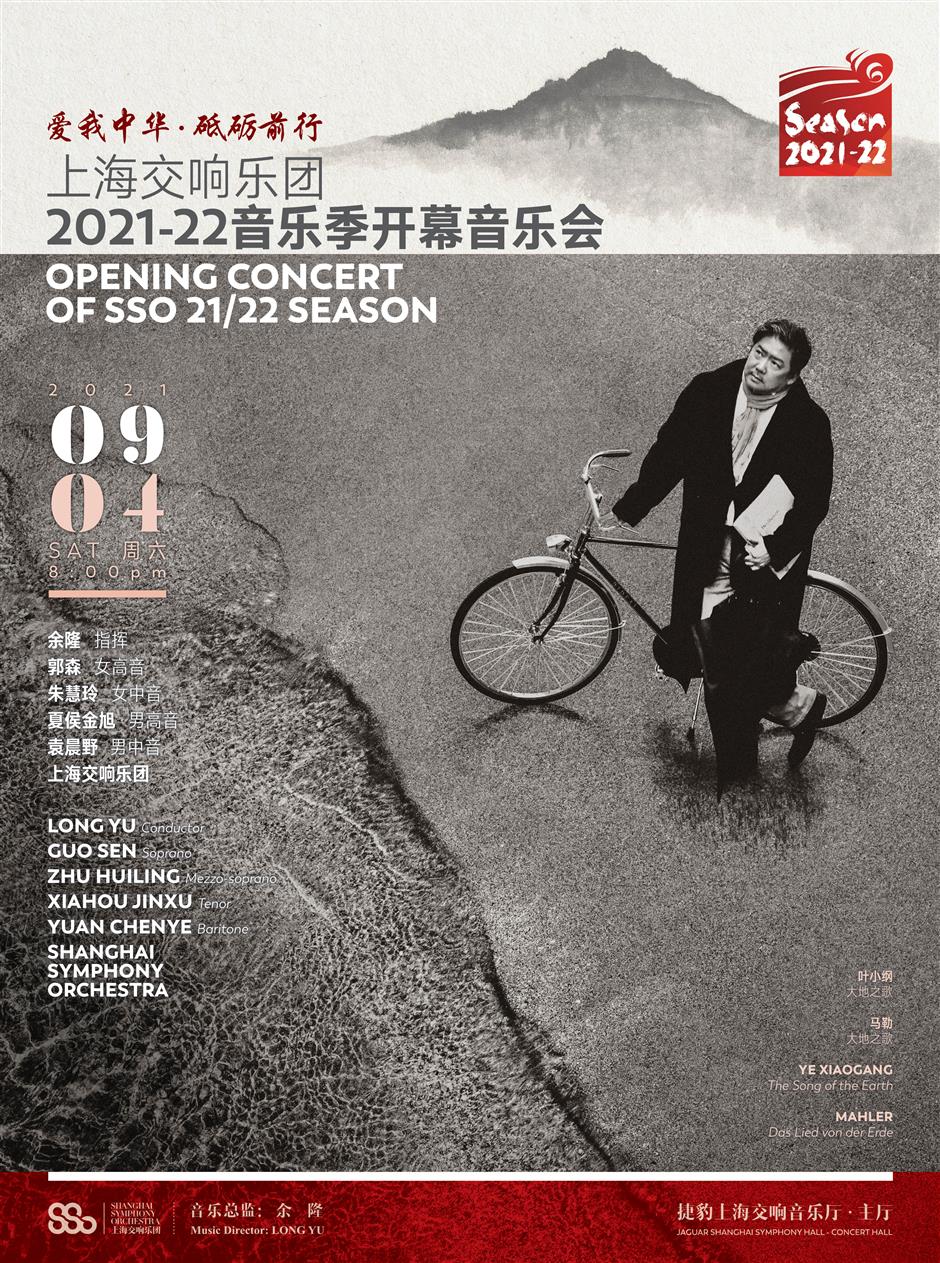 The opening concert is conducted by the orchestra's artistic director Yu Long.

Other highlights include the Chinese premiere of Stravinsky's "The Rake's Progress" with an all-Chinese cast, a concert version of the opera "Madame White Snake" by 2011 Pulitzer Prize for Music winner Zhou Long and a sci-fi opera "AI's Variation" by Hao Weiya.

The second half of the program will see the orchestra invite international musicians, particularly guest conductors, with a focus on music from the 20th century.

Orchestra director Zhou told Shanghai Daily the orchestra intends to go beyond its music program to explore the relation between music and the younger generations, as well as music and the city.

"Audiences are evolving, especially after the pandemic. The idea of a music season would probably also evolve post-pandemic," Zhou explained.

"Through the pandemic, and especially via our virtual events watched by mostly younger audiences, we became more intimately connected with the younger generation, and were somewhat surprised by their talents and ideas distinct from, and often more creative and boundary-breaking than, our own. 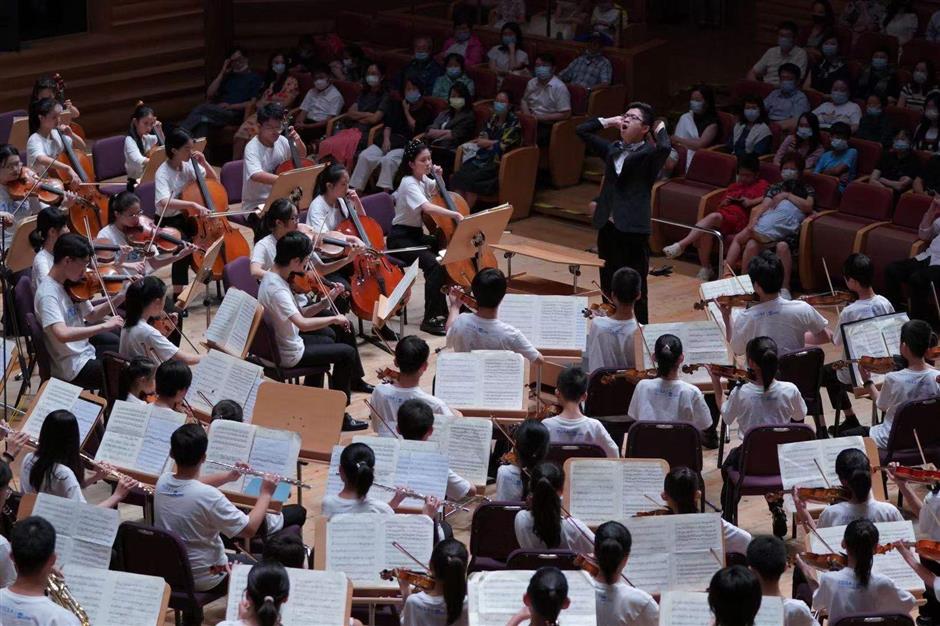 A concert from the orchestra's summer festival MISA features the younger generation of musicians.

"You may have noticed every piece from the repertoire has a bracket behind the title saying 'China premiere,'" Zhou said. "Though young, they must have such a vast music appreciation that they picked out the pieces they liked and never played in China. What a creative way to put up a repertoire like this!"

"The pandemic gave us an opportunity to explore new Chinese talent, and sometimes we are just amazed by how good they are," she added.

That amazement also rings true when casting for "Madame White Snake," an opera adapted from the household ancient Chinese tale about a white snake falling in love with a human being, with a contemporary setting and costumes. The opera mixes the Western opera singing technique with some vocal tones of Peking Opera – a challenging task that would highlight its dramatic tension if done correctly by the singers.

"The Rake's Progress" will also have its China premiere, with an all-Chinese cast and Chinese director Zou Shuang. To commemorate the 50th anniversary of Igor Stravinsky's death, the orchestra will feature a series of the maestro's works during the season, including "Four Norwegian Moos" and "Petrushka."

While commemorative events for the 110th anniversary of Gustav Mahler's death were delayed and cancelled around the world due to the pandemic, the orchestra braved travel restrictions and other challenges to bring two American singers and two German sound engineers to the city last year for the recording with Deutsche Grammophon.

Released earlier this month, the recording put Mahler's symphonic song-cycle, which adopted seven Tang Dynasty (AD 618-907) poems for six songs about life and death and the cycle of nature and was completed in 1909, alongside Ye Xiaogang's composition drawn from the exact same poems.

Poems from the subsequent Song Dynasty (960-1279) will be featured in the concert "Lush and Verdant" on September 21, under the baton of the orchestra's conductor-in-residence Zhang Jiemin. Composed by Grammy nominee Zhou Tian, it was inspired by poems from the Song Dynasty, another golden age of China's poetry, with repeating motifs and subjects on the relentless search for the spirit of freedom and intellectual independence. 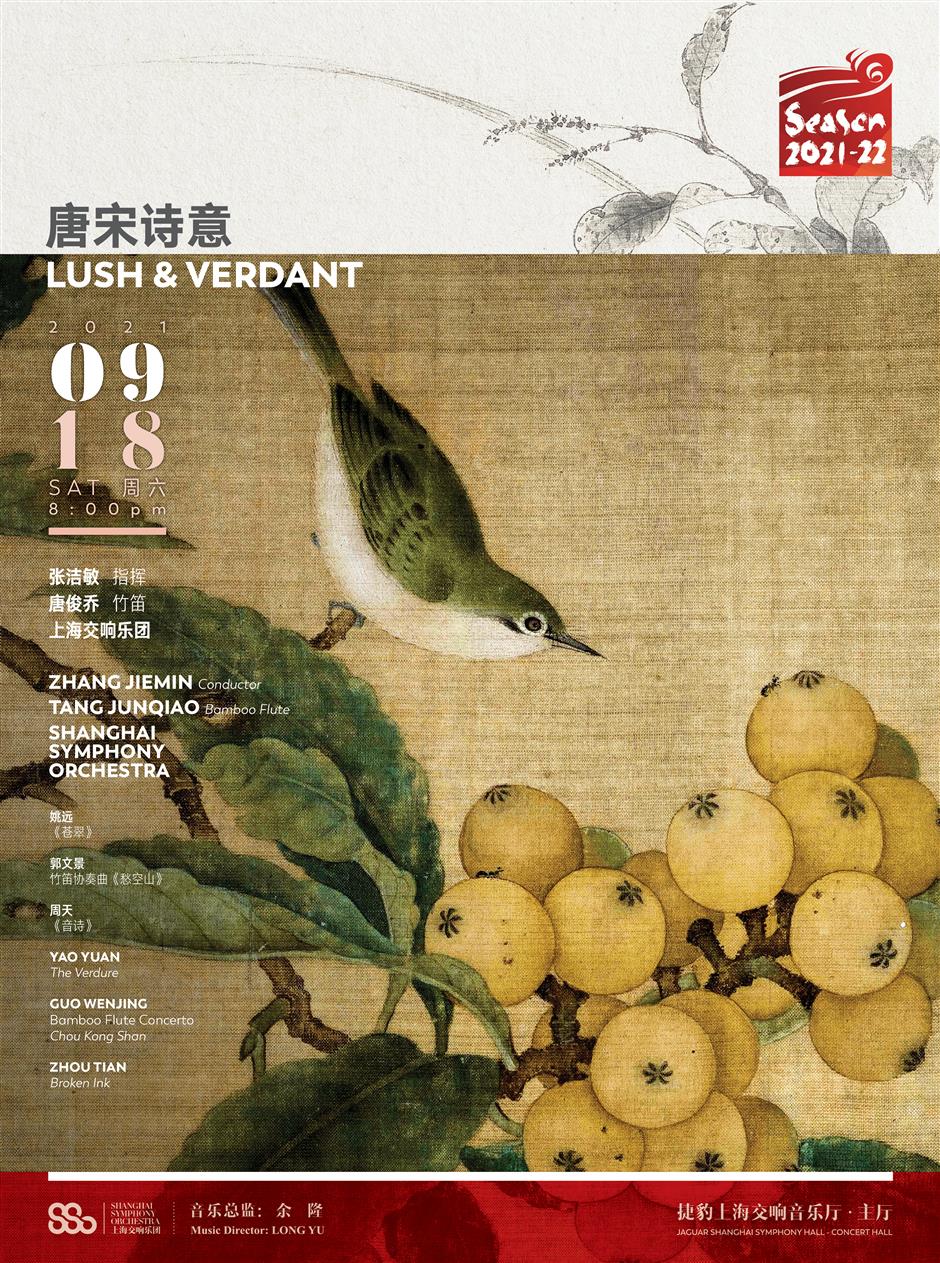 The "Lush & Verdant" highlights the glory of the poems of Tang and Song dynasties.

The orchestra was among the first to promote chamber music in China since 1984, and has long been encouraging its performers to self-match into chamber groups.

Chamber music will also play an important part in the new season, with 14 concerts featuring the orchestra's own Polaris and the East Coast Quartet, among others. The program will explore lesser-known works from big-name composers alongside legacy works from lesser-known musicians.

Astor Piazzolla's 100th birth anniversary will be marked, as well as Chinese premieres of works by Pavel Haas, Julio Medalia and Anthony Hedges.

All of this year's orchestral concerts will be streamed exclusively on Tencent Arts, available to watch throughout China.

"We all talk about cross-boundary and multi-culture now," Zhou said. "Shanghai and the people here, especially the next generation, are among the most inclusive for new experiments and creative ideas that break traditional genre boundaries.

"The next generation of musicians, born after 2000, has a strong sense of self-expression and self-awareness, like many of their peers. We really ought to understand them more, and build a stronger connection with them musically."