Everything's coming up roses for Hangzhou 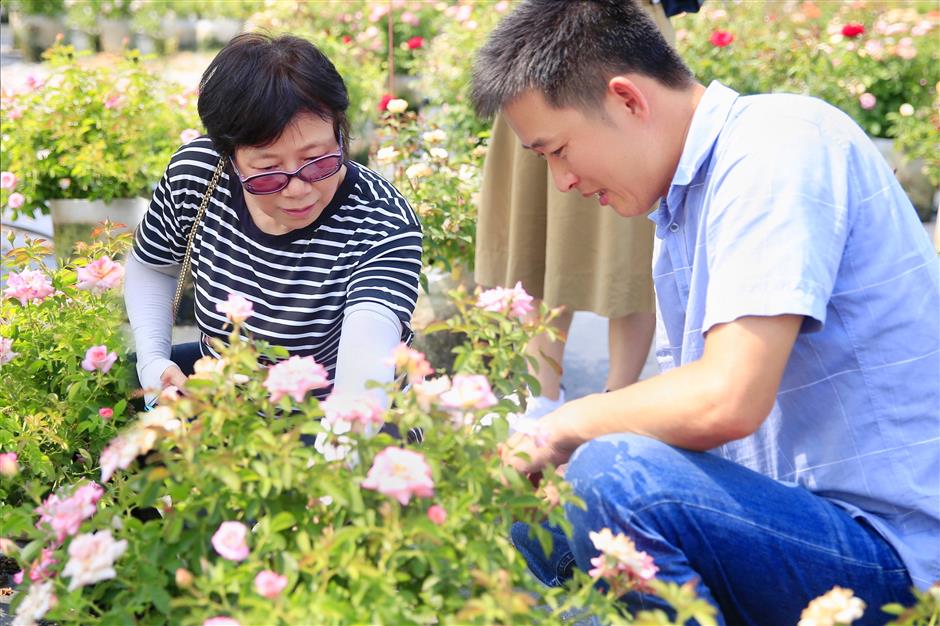 Fan Lijuan (left) and her colleagues observe the flowers to decide whether they are suitable for Hangzhou to enrich roadside vegetation.

Hangzhou is ablaze with vibrant roses that will keep blooming through June. Along the city’s elevated roads, about 132 million pots of pink, red and yellow flowers present a visual feast for drivers to enjoy.

“Out-of-town travelers may marvel at Hangzhou’s huge expenditure on flowers, but it is exactly the opposite,” said Fan Lijuan, researcher with the city’s landscaping and cultural heritage bureau.

Roses are perennial plants that can bloom every year, in contrast to short-lived annuals that require workers to remove and replace them when they die back.

“Once we plant them, we just need to water them using automatic irrigation machines and spray pesticide periodically. Actually, growing roses has helped the government cut down a large amount of expense on greening,” Fan said.

Before 2009, roses were rarely planted in Hangzhou’s public spaces. At the time, roses were more popular in northern China, such as Beijing and Tianjin.

In 2009, Fan and her colleagues decided to pilot perennial flowers in Hangzhou to replace their expensive short-lived counterparts to make the city resplendent with flowers all year around.

They looked for varieties across the country, visiting breeding bases in Jiangsu and Henan provinces and finally decided to plant three kinds of roses along the Shangtang and Zhonghe elevated roads.

In 2012, residents were surprised to see the roses come into full blossom, and Hangzhou began to grow roses at a large scale along elevated roads since then.

“The present-day rose numbers might sound incredible. In fact, they have accumulated within 12 years. According to different varieties, the flowers keep thriving for months. The best view is in late April,” Fan said. 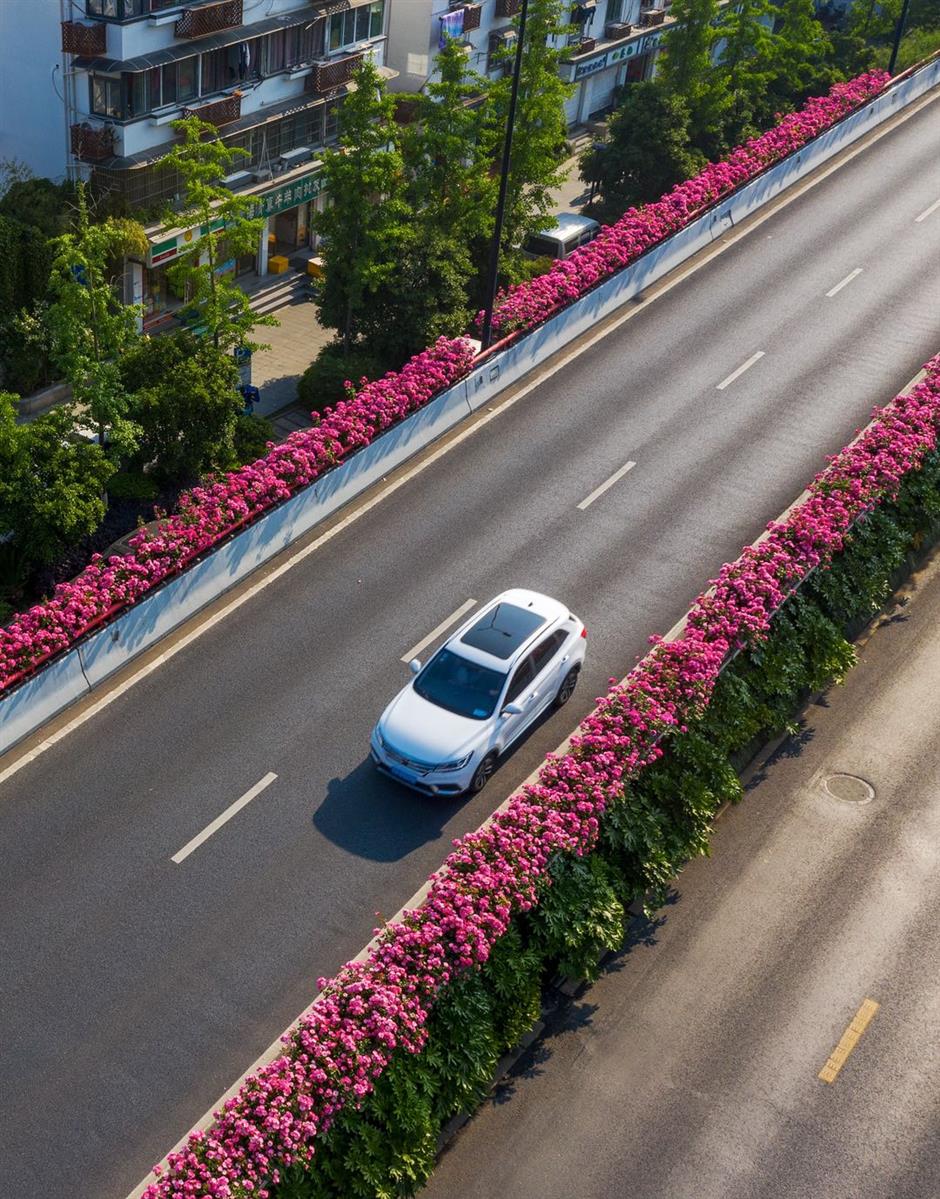 The red roses along the elevated roads present a visual feast for drivers to enjoy.

Since the elevated roads are congested during the day, workers have to trim branches and spay pesticide at night. The bureau has issued an evaluation system and each district is in charge of its own roads.

“Such evaluation is tied to bonuses and awards, which could give impetus to official departments and workers. In return, the rosebushes are well nurtured,” Fan said.

Hangzhou ranks No. 1 in southern China for its number of roses. Over the past two years, more than 150 delegations from other provinces have visited to learn about growing roses from Fan. Many cities have drawn on Hangzhou’s experience and are planting roses alongside their roads.

“Roses can cope with winter temperatures which may drop below freezing. And the small bushes won’t impact driver’s visibility. They are the ideal flowers for urban greening,” Fan said.

“Roads are the frameworks of a city. The roadsides account for the majority of urban greening. Except for lush vegetation in parks and gardens, we should also put emphasis on roadside landscaping, giving citizens a visual treat and enhancing the urban view.” 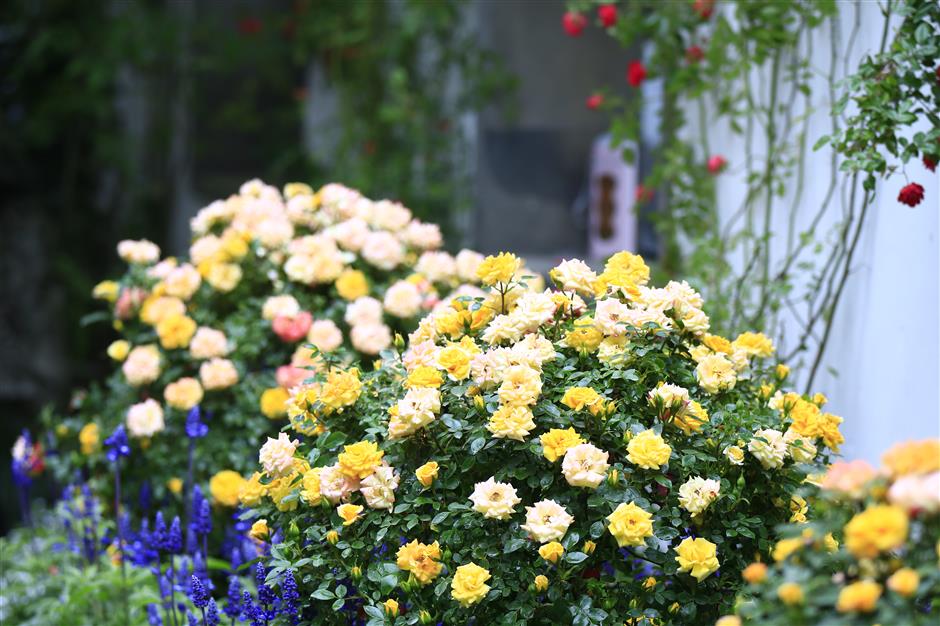 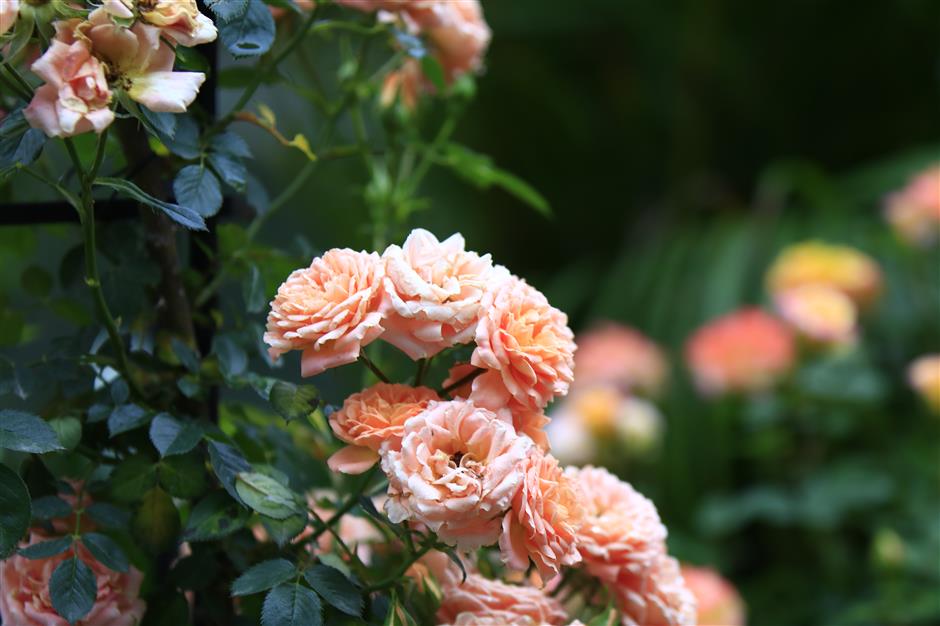 Roses are in full blossom along the elevated roads.

Fan and her colleagues have been taking measures to beautify the city for years. In 2009, the bureau launched an annual “Natural Flower Arrangement Competition” to encourage local departments to innovate landscaping methods.

“Formerly, local departments grew flowers, shrubs and trees just in lines without any artistic design or aesthetics. Now, the competition stimulates them to arrange different ornamental grasses, flowers and shrubs in a pleasing way and balanced composition,” Fan said.

“The flowers must be perennial plants to cut down expenditure, and the designed greening area must be bigger than 50 square meters with various plants. We prefer compositions with the same color scheme and blooming in different seasons.”

To enrich roadside vegetation, Fan and her colleagues have traveled across the country to look for other plants suitable for Hangzhou. To save money, they pick young plants instead of mature ones.

Not long ago, they introduced a new kind of cherry in Yuhang District. Oshima and Yoshino cherries have dominated in Hangzhou. However, their white and pink colors looked rather monotonous growing alongside roads. The young plants are expected to bring a new vista to the urban landscape in a few years.

“Urban landscaping is a long-term work. It always takes years to see results. We should take both time and money into consideration and gradually realize our goals,” said Fan.