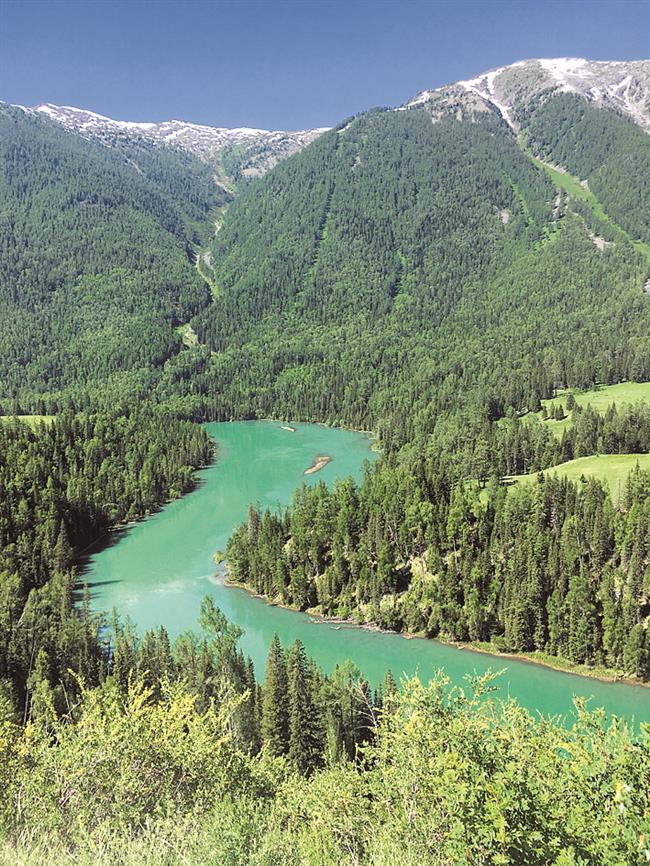 Locals believe two islets in Moon Bay are the footsteps of a giant mountain creature and lake "monsters" swim among the bays.

After disembarking from a plane and settling into the back seat of a tourist van in the town of Kanas, I stared out the window like an awe-struck child.

It was a tiring five-hour flight from Shanghai to Urumqi, capital of Xinjiang, and then a one-hour hop flight to Kanas in a remote border area of northern Xinjiang where China converges with Russia, Kazakhstan and Mongolia.

But the long haul wasn’t over yet. Ahead of me lay a two-hour drive from Kanas airport to my destination — Kanas Lake in a valley deep in the Altai Mountains. It’s the rumored home of lake monsters.

It was a hilly road trip from the airport to the lake, with speeds limited to 40 kilometers per hour and periodic stops for cattle on the road and security guards checking IDs.

When I finally reached the hotel, it was 1am in sheer darkness and freezing cold.

“Tomorrow will be a good day, and get ready to see the monsters,” said my tour guide Yue Yue, a plump girl of the Hui ethnic minority who had just graduated from a local university.

The lake monsters, like the Loch Ness legend, is a bit of a tourist gimmickry, which this place doesn’t really need, given its unparalleled natural beauty. In the Mongolian language, Kanas means “beautiful and mysterious.”

But Yue Yue was determined to press on with the monster tale. “They do exist in the water,” she said. “I once saw them in pictures. They were pink and about 15 meters long.”

For several centuries, there have been reported sightings of large lake creatures in the Kanas waters. The first research trips were conducted by a professor from Xinjiang University, who observed fish of enormous size in 1985.

Further research seemed to conclude that the lake creatures were large fish known as Hucho taimen, or Siberian salmon. The fish on average weigh 15-30 kilograms and are 70-120 centimeters long.

Kanas Lake runs out of the Kanas River, which in turn originates in the snow-capped Altai Mountains. The river has three famous bays: Moon Bay, Immortal Bay and Crouching Dragon Bay.

“It’s said the monsters swim back and forth among the bays,” Yue Yue told me. 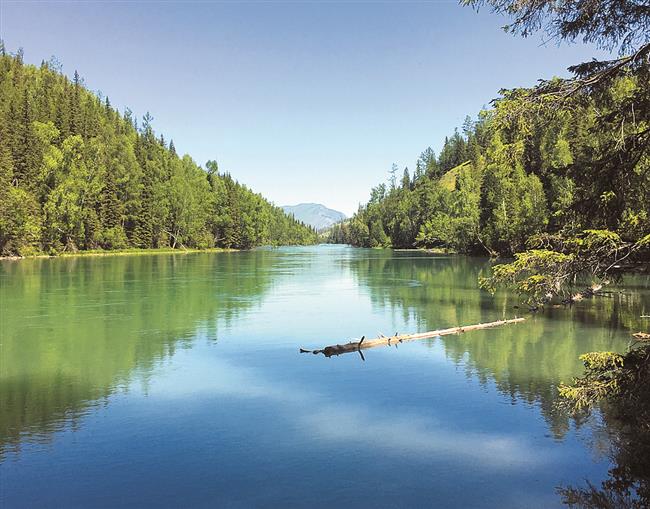 The Kanas River, which flows down from the Altai Mountains, hosts Moon Bay immortal Bay and Crouching Dragon Bay.

Moon and Crouching Dragon bays are named after their shapes, while Immortal Bay is named after its appearance. A layer of mist normally hangs over the water, giving the place a heavenly aspect. It’s certainly the most scenic of the bays.

The morning sun glistened over the river, giving it the appearance of a silver serpentine winding back into the distance. I decided to hike from Moon Bay to Crouching Dragon Bay, a brisk walk of about 3 kilometers, with several observation points along the way to view the river.

The journey started at a sacred spring, fed by snow melt. It is believed the waters bring good luck to people.

“Drink it or wash your hand in the water three times,” Yue Yue said. “But don’t shake off the water because it’s the good luck.”

I noticed that rocks near the spring water were strewn with coins and notes, like many other tourist attractions in China where people believe a small money donation will bring them blessings from the gods.

In the summertime, Kanas bakes under the scorching sun by day, but ducking under tree shadows by the crisp, clear waters brings refreshing relief.

A walkway runs along the Kanas River, flanked by forestland of pine and silver birch. The scent of pine was really invigorating.

Yue Yue said autumn is an ideal time to visit Kanas, when the leaves turn bright red and golden yellow, reflecting into the water.

I had some cute company on my walk, with otters and squirrels as companions. I came across an ant nest as big as a hillock. Ubiquitous mosquitoes were a bother. It’s best to wear long sleeves and trousers while hiking.

It took about half an hour to get to the observation point of Moon Bay, where I had a bird’s eye view of a sweeping curve in the Kanas River.

“See the two isles in the river?” Yue Yue said, pointing them out. “Don’t they look like the footprints? Legends say they were left by some giant hidden in the mountains.”

Most of the journey was flat, except for the last uphill section. It was worth the effort. When I reach my destination at the top, I had a panoramic view of the Kanas River flowing out of the Altai Mountains and vast grasslands.

Further along was Kanas Lake, home of the “monster.” The lake was formed around 200,000 years ago during the Quaternary period as a result of glacier movement. Its central area is under protection. Only scientific research parties are allowed to enter.

People don’t swim in the lake, even if they are willing to brave the cold. They’re afraid a monster will sneak up and bite them, according to a local Kazak child. But I really wanted to get closer to the water, so I took off my shoes and socks and dangled my feet in the ice cold waters. So refreshing! It suddenly eased all the hiking pains.

The evening was celebrated with loads of local beer and skewered lamb. As tourism comes to the Kanas area, many local houses have been transformed into inns, offering travelers affordable accommodation as well as authentic meals and traditions.

Some of the locals still herd cattle on the plateau grasslands. 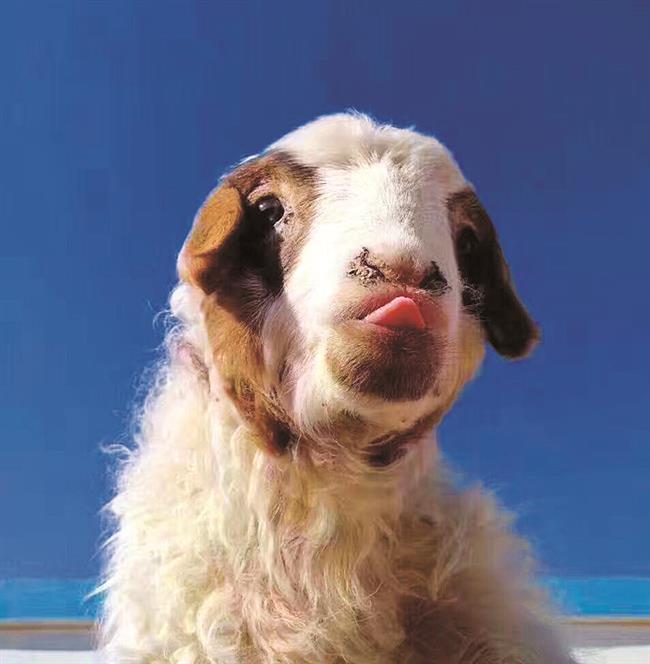 A cuddly-looking lamb on the road

In the Kanas Valley are populations of ethnic Tuvans, Kazaks and Mongolians. Most have maintained their traditional lifestyles of farming and herding. Some are venturing into the tourism industry, offering orienteering, hiking, rafting, rock climbing and paragliding.

Locals are extremely hospitable, dashing to some extent the perception that Xinjiang is not a safe place to visit.

“I think it’s just a misunderstanding,” Yue Yue said, by way of explanation. “I’ve been living here for more than 20 years and I feel safe and peaceful. Bad things do happen, but it’s just like other places in the world.”

Probably she is right. We need to overcome our prejudices.

I met a coffee shop owner in Kanas’ only source of real coffee. She was Han but was born here 40 years ago. Her father, from northeastern China, first came to this area back when the government was sending educated youth from the east to work in impoverished remote areas.

Tanned, weather-beaten and wearing a traditional costume, the shop owner seemed like an authentic local, except for some vestiges of a northeastern Chinese accent.

As part of my trip, I visited a traditional family home in Hemu County, a three-hour drive from Kanas.

The Yerdemut family lived hidden in deep forest by the Hemu River, which connects to the Kanas River. I trekked about half an hour through woods toy get to their home, where I was welcomed like a long-lost relative.

The mother of the household served as hostess. She didn’t speak Mandarin, so her son Yerdemut, 11, had to translate for me. The family makes a living by herding horses, lambs and cattle. They grow garlic and potatoes in the backyard and also earn some side income looking after the forest for the local government. 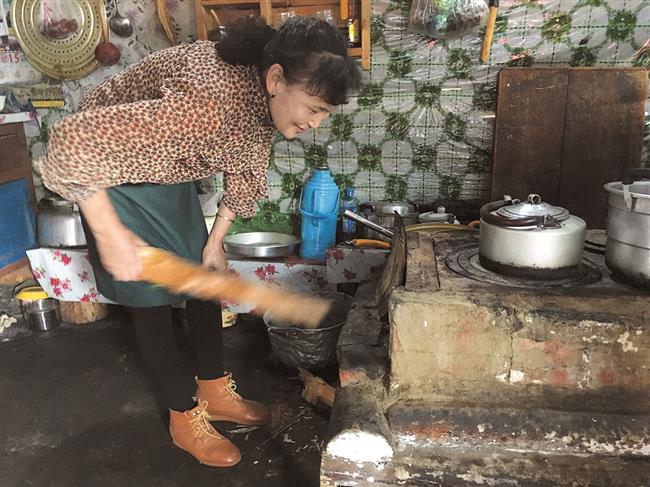 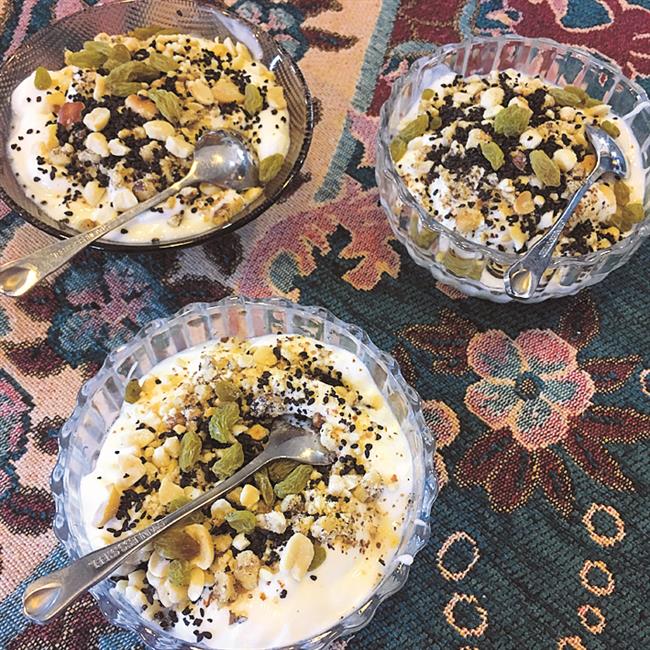 Local iced yoghurt with toppings of dried fruit and nuts

Their home is a traditional Mongolian log cabin, dimly lit but clean and simply decorated. On one wall hung portraits of Genghis Khan, founder of the Mongol empire, and Chairman Mao.

The mother prepared a feast for me that included large chunks of beef, homemade yoghurt, liquor made from fermented horse milk, buttered tea, nuts and a sort of cheese candy.

It is traditional for locals to slaughter cattle in November and air-dry the beef all winter.

The hostess also showed me how to make liquor from fermented horse milk, which had a light, refreshing taste.

Yue Yue told me the liquor was often made by girls to give to young men of their choice at the annual mid-summer Aobao Festival.

“The liquor is said to make the young man’s legs weak so that he can’t run away,” she said, with a bit of a naughty smile.

Yerdemut’s family has maintained a traditional way of life. But herding is a hard way to earn a living, so the local government has persuaded families like his to open their doors to tourists. They receive a subsidy for showing off their lifestyle to visitors.

In the era of what some might call digital overkill, it was hard to reconcile life back in Shanghai with the life I witnessed at Yerdemut’s home (no Wi-fi; extremely poor signal). Somehow, I hoped this place would never be tainted by the chaos of modern urban life.

I asked Yerdemut what he plans to do in the future.

“I want to go to Urumqi and see what a big city is like,” he replied. 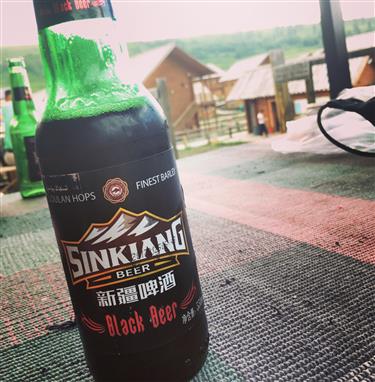 A bottle of Sinkiang (Xinjiang) Beer quenches the summer heat and thirst.

How to get there: It takes about five hours to fly from Shanghai to Urumqi, capital of Xinjiang. From there, it’s another one-hour flight to Kanas.

1. Kanas is vast. It’s best not to try to see everything in one trip. By focusing on one or two routes, you won’t miss the beauty of all the fine detail.

2. Cellphon signal is weak to non-existent. It’s best to make all necessary travel arrangements in advance.

3. Xinjiang is a dry region. Best to carry water with you at all times. The sun’s rays are strong here. Applying sunscreen will prevent your skin from burning.

4. The daytime and nighttime temperature gradient is steep. It can drop to minus 5 degrees Celsius at night and early morning, then shoot up to 27 degrees by noon. Be sure to bring clothing to suit all conditions.

5. Horses are a common form of local travel, and their hooves kick up a lot of dust. A mask or scarf can be helpful to the lungs. It’s also a good idea to bring insect repellent to protect yourself from blood-thirsty mosquitoes.