Take a flying leap into the world of kung fu fighting 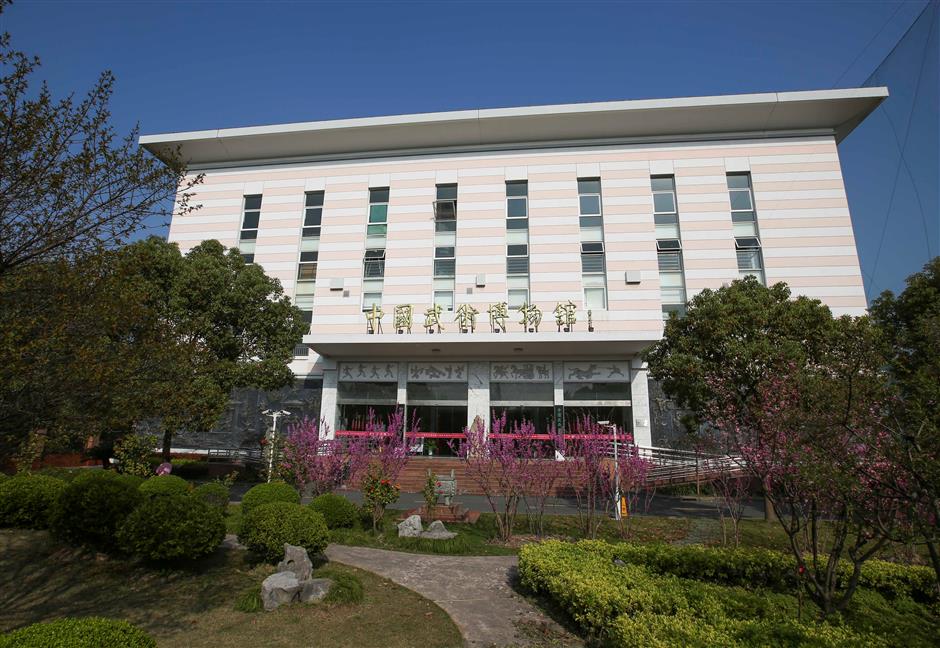 The Chinese Martial Arts Museum is located inside the Shanghai University of Sports. 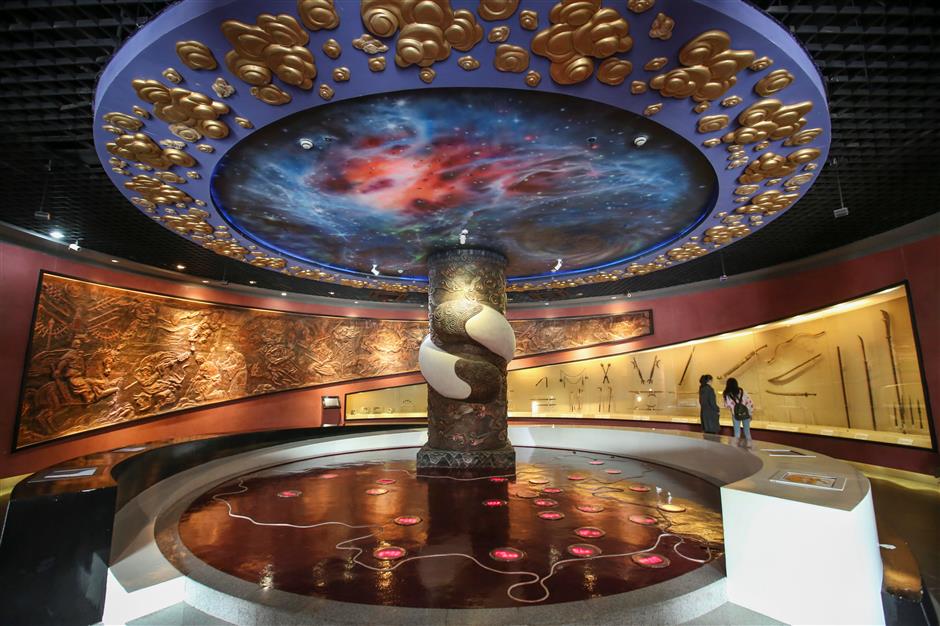 A giant painted column, covered with auspicious clouds, stands upright in the center of the hall.

The clash of swords, mystical forces that send people flying and secret scriptures depicting the stances for hand and weapon combat.

It’s all in the Chinese Martial Arts Museum, which takes visitors on a whirlwind tour of kung fu history with more than 2,000 collection items. The museum, inside the Shanghai University of Sports, is a journey into the world of ancient Chinese chivalry. A giant painted column, covered with auspicious clouds, stands upright in the center of the hall. Carved in a fist-holding salute pattern, it represents the spirit of kung fu etiquette and mutual respect.

A map of China stretches out, highlighting the 29 provinces that were the cradle of 129 boxing schools, such as mantis boxing in Shandong Province, Shaolin boxing in Henan Province and eagle’s claw boxing in Hebei Province.

The walls of the museum are adorned with traditional Chinese weapons, including the 18 famous “cold weapons” such as the saber, spear, sword, halberd, axe, lance, whip and hammer.

A southern broadsword used in the first Chinese kung fu competition about 30 years ago is also on display. In trained hands, it could be used for striking, hacking, chopping, pushing and sweeping.

The wolf-toothed cudgel, an ancient weapon that appears only in kung fu fiction, has been reproduced. Its head is nailed with numerous iron spikes, which resembles the teeth of a wolf. The cudgel was used in battle to chop, punch, block and thrust against enemies.

The meteor hammer, a “soft” martial arts weapon, is convenient to carry and easy to use. Shaped like a small watermelon or a papaw, it can hurtle through the air as fast flying as a meteor sweeping across the sky.

A nine-section whip consists of a head, handle and eight steel knobs, connected by three iron loops in every section. The whip is used to wrap, sweep, swing and hang enemies.

A horsetail whip, originally used in Taoism, can also be a weapon in kung fu. It’s made of animal’s hair — often horsetail or deer tail — or of silk tied onto the front of the handle. The whip is used to lash upward, sweep downward, twist and tilt.

Portable cached weapons, allowing the most cryptic stunts in Chinese kung fu, are also on display. They include a flying dart, a plum-flower needle, a sleeve arrow and an iron billiard.

One flying sword was constructed with a groove on one side, where poison could be stashed to hasten blood loss when the weapon was thrust into skin. A concealed sleeve arrow could be activated quickly in attack. 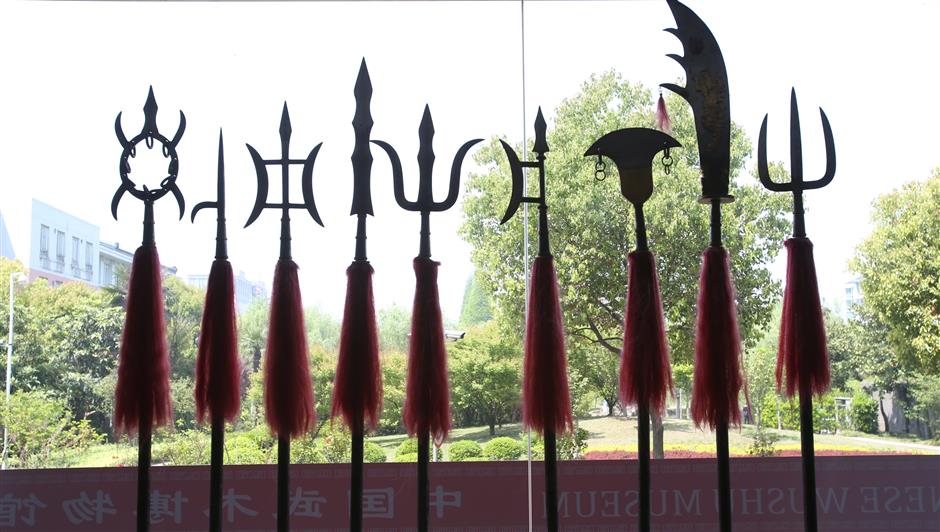 Sword of the Qin Dynasty 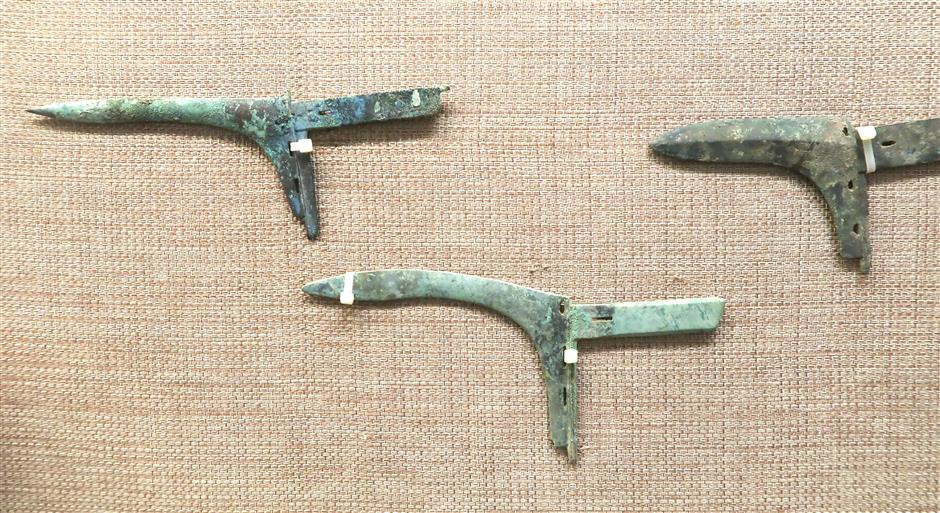 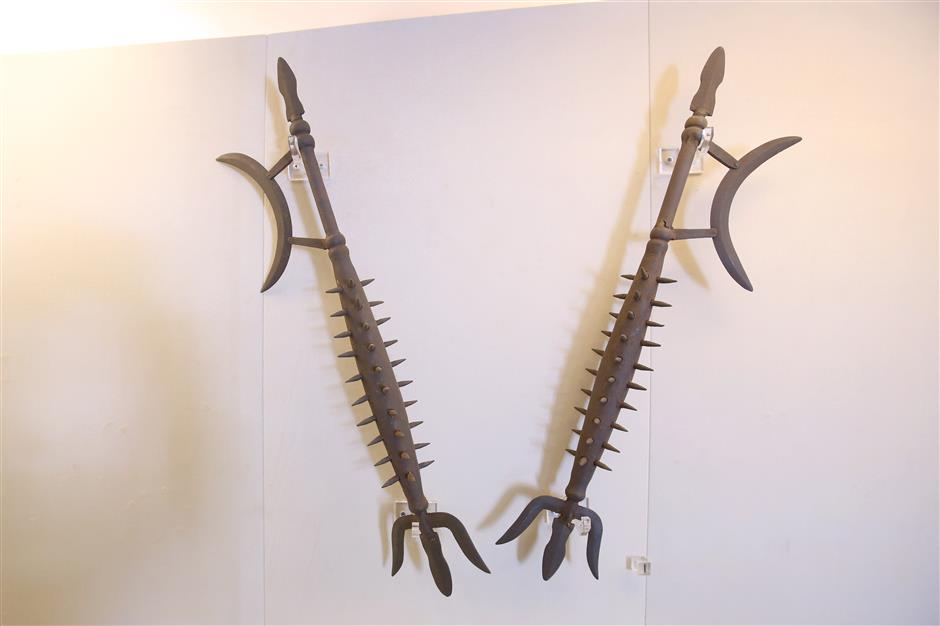 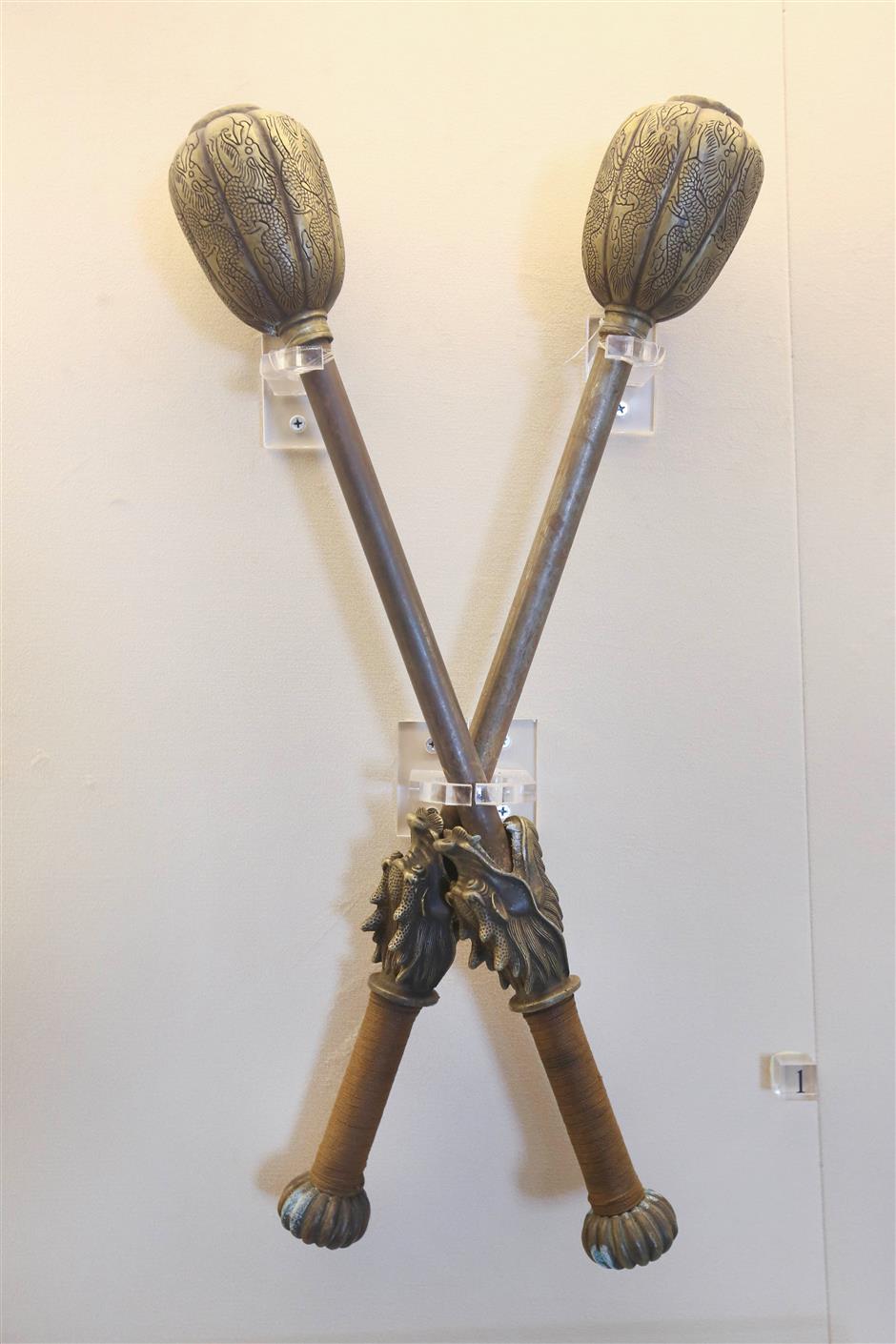 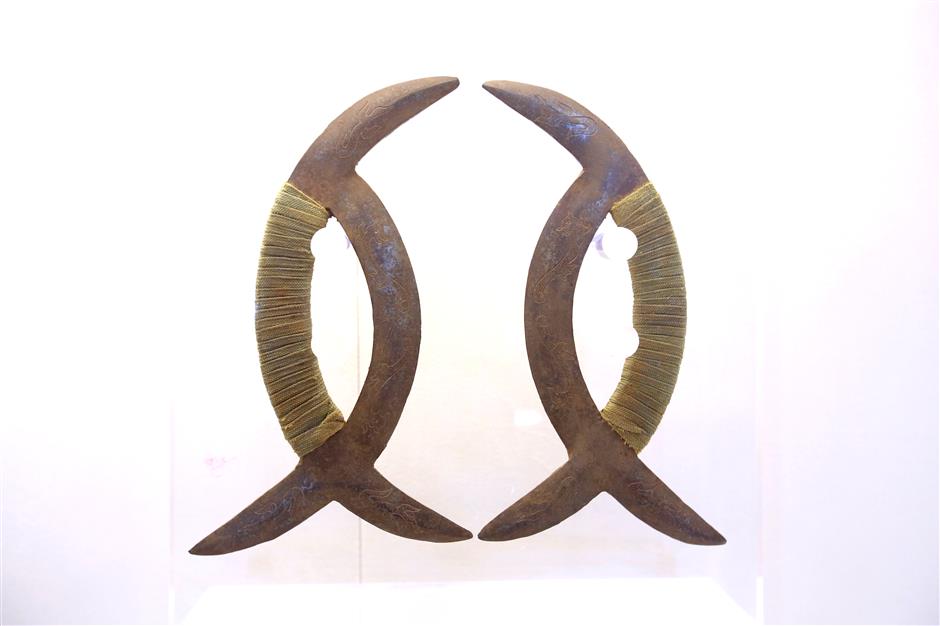 A pair of yue, or tomahawk 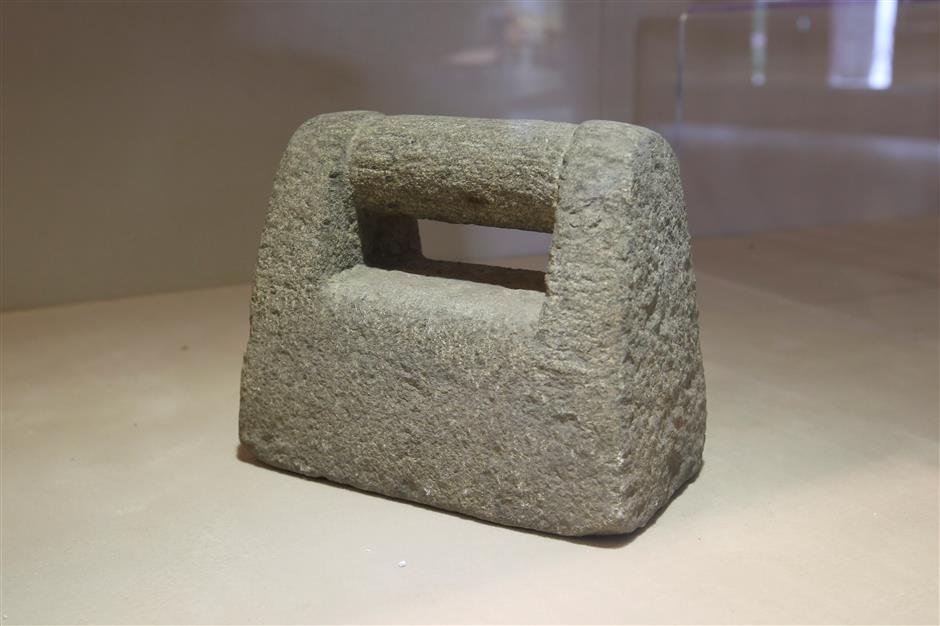 Chinese kung fu dates back about 6,000 years, before metal was used in the instruments of hunting and warfare.

In the Xia (c. 21st-16th century BC), Shang (c. 1600-1046 BC) and Zhou (1046-256 BC) dynasties, the Chinese learned how to alloy copper and zinc. In the Warring States (5th century-221 BC), bronze daggers and spears appeared. Installed onto long wooden sticks, the sickle-shaped weapons were often used to behead people.

A bronze sword made during the Warring States is one of the precious items in the museum. It was forged with two kinds of coppers, which was quite rare at the time.

In the Qin Dynasty (221-207 BC), the sword became longer and smoother as forging techniques improved. A Qin sword on display still glints today.

Iron was made in the Han Dynasty (202 BC-AD 263). It was lighter and more flexible than bronze and easier to carry in horseback battles against invading Huns from the north.

One iron sword, though rusty, typifies the prowess of the Han. Almost 100 centimeters long and 745 grams in weight, the sword had a sharp, straight cutter edge. It was discovered in Gansu Province.

Empress Wu Zetian (AD 624-705) founded the imperial martial arts examination system to select warriors during the Tang Dynasty (AD 618-907). The tests included horseback darting, thrusting and weightlifting, which are depicted by clay sculptures in the museum.

An iron machete from the Qing Dynasty (1644-1911) gives a clear picture of the difficulty of the examination. The giant machete is more than 2.3 meters long and weighs 80 kilograms. It was used to test weightlifting skills. Contestants were required not only to lift it but also to wield it in battle mode.

The soldier’s spear was another weapon used in the examination of skills in horseback combat. It was about 3 meters long. An iron core was wrapped in bamboo and fish skin, which increased the weapon’s flexibility. 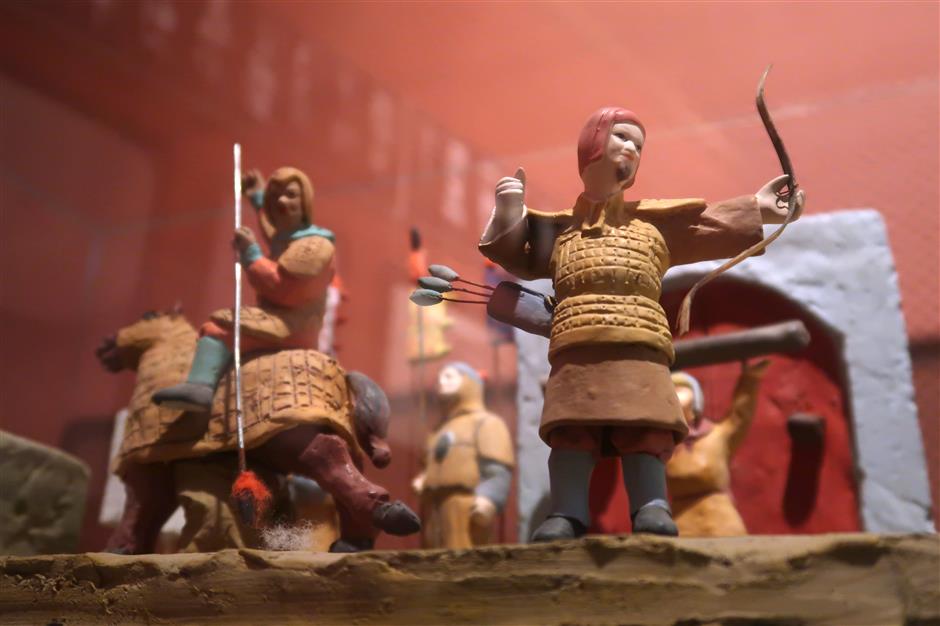 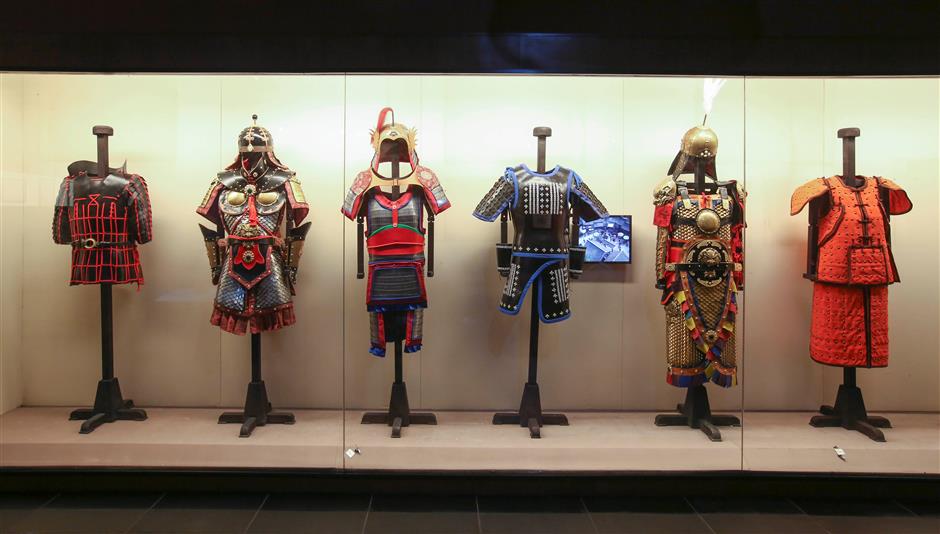 Secret kung fu scriptures retain a modern-day mystique. The museum exhibits some of the copies of the renowned old scriptures. A careful read, however, shows they are not all that magical. Most of the ancient scrolls taught people how to regulate their breathing, to meditate and to enhance blood circulation.

The “Basic Boxing Techniques,” written by kung fu master Guo Cuiya during the Republic of China (1912-49), may be one of the most practical martial arts textbooks. It showed how to train the arms, legs and waist, along with illustrated foot movements.

World-famous Shaolin kung fu embodies the essence of many schools. It is vigorous and substantial, strong and flexible, combining rapidity with slowness, motion with stillness.

Two heavy old wooden water buckets displayed in the museum show the rigorous training of Shaolin monks. The bottom of the buckets are conical and cannot rest flat on the ground. A monk was required to carry two buckets full of water up and down a hill every morning, and the conical bases prevented laggards.

During the Republic of China, a spirit to protect the country with kung fu ran high among the public. Martial arts entered mainstream schools for the first time. Kung fu books were published and scientific research was conducted.

In 1936, General Zhang Zhijiang (1882-1966) led a team of Chinese kung fu experts to the Berlin Olympics to perform in the opening ceremony. It was the first global performance of Chinese martial arts. Old pictures and news clips at the museum record the event.

Another big event created a public sensation in 1940s Shanghai, when 15-year-old Cai Longyun, a boy schooled in huaquan, or “long fist skills,” defeated a muscular Russian boxer. Cai, who died in 2015, later became an acknowledged kung fu master and teacher at the Shanghai University of Sports.

His pugilistic victory is represented by a full-size waxwork reproduction of a boxing ring, with a lean Chinese boy extending his hand to a muscular white man whom he had knocked down.

The B1 floor of the museum is filled with interactive kung fu games, such as keeping one’s balance on staggering piles, dodging darts in a dark room, learning acupuncture points that can numb the body and practicing the martial art of Wing Chun on a wooden dummy.

Address: 399 Changhai Rd (inside the Shanghai University of Sports)
Admission: Free
Opening hours: 9am-4pm (closed on Mondays)
How to get there: Nenjiang Road Station of Metro Line 8 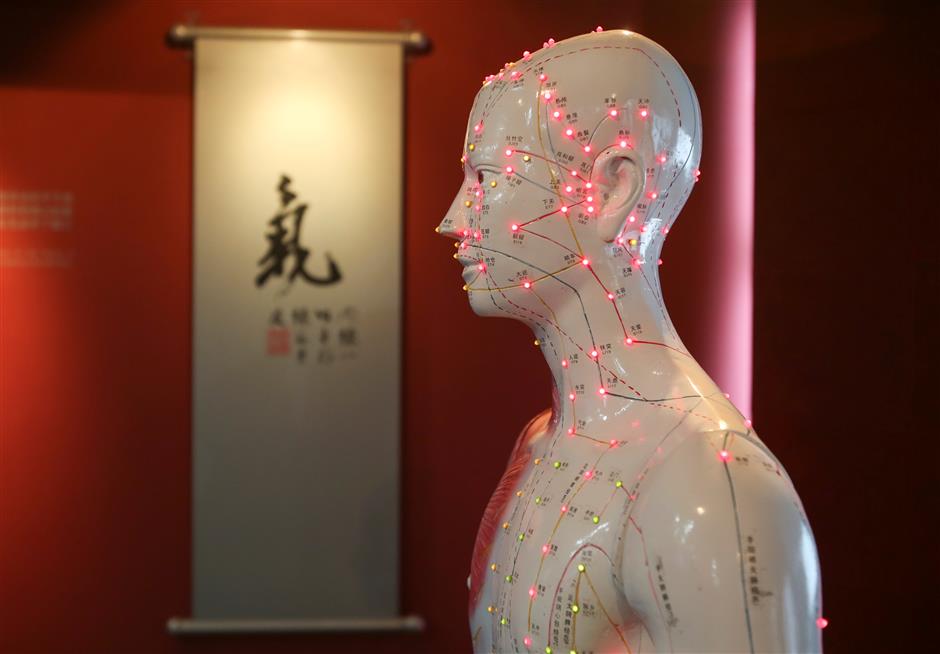 A model with acupuncture points 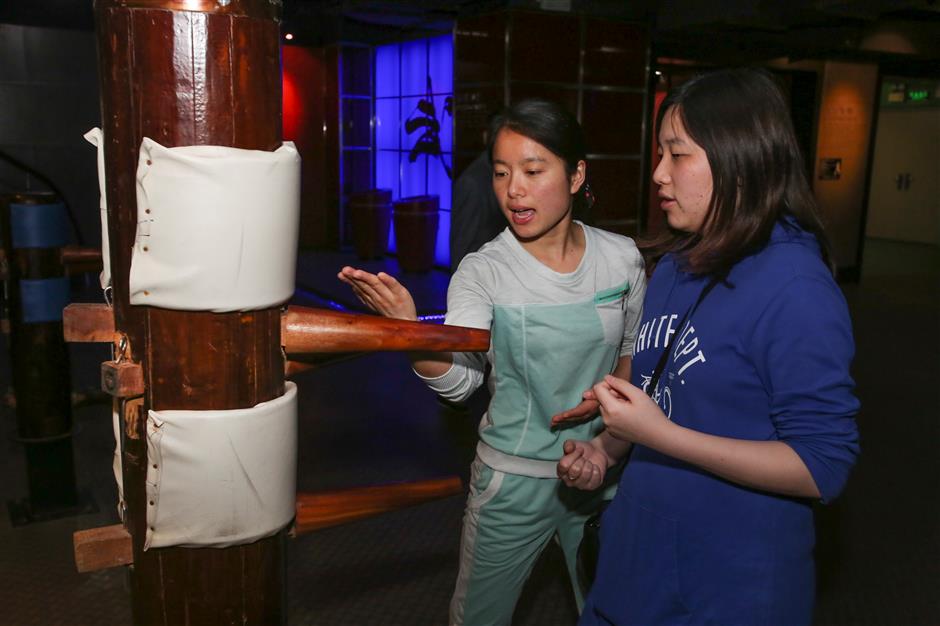 A visitor practices the martial art of Wing Chun on a wooden dummy.

﻿
Special Reports
ADVERTISEMENT
61833
,
For a spring break, take a stroll in our beautiful backyard
Been there, done that? Not at these quirky sites
B&Bs in rural areas add artistic flourish to farmland holidays
Xiangshan awakens with arrival of spring
Hangzhou abounds with festival activities
A step back in time in any language in Songjiang
Fudan University founder's home is renewed
Mount Chaoshan celebrates plum blossoms with cultural activities
All aboard for a culinary excursion that will tantalize the taste buds
An excursion that gives us something to think about
EXPLORE SHINE