Epic journey in the footsteps of a Chinese monk

“Chasing the Monk’s Shadow: A Journey in the Footsteps of Xuanzang” is a book written by Indian author Mishi Saran. In the book, Saran followed the tracks of Chinese Buddhist monk Xuanzang on the Silk Road, passing through ancient China’s oasis cities such as Turfan and Kucha, and Buddhist sites and now-vanished kingdoms in India, Pakistan and Afghanistan.

The places and people she described drew me. As a Chinese, how can I be ignorant of such a link that once connected the East and West and has been carrying not only goods but ideas between the regions for so many centuries.

History beckons. Following such guidance, I have been making several trips into the depth of China’s vast western region since last year. When the opportunity came for me to hop on a journey to the other side of the Himalayas, I grasped it without hesitation.

We arrived in Varanasi on the evening of January 16, when a huge crowd of people were gathering at the ghats for the Ganga Aarti alongside the River Ganges. It was first time that I had watched that kind of prayer, which was really amazing.

Priests danced in groups with lights (Diya) in their hands, chanting “Om Namah Shivaay” (O salutations to Lord Shiva), and the public repeated the same along with them. Though we didn’t know what was being said at the time, we were very much involved with the moment. You can feel the dedication and unity between those who have made the effort to be alongside you to participate in the celebration.

Red tilak was applied, a donation was  made and an enthusiastic local even invited us to join the bench of men for a sip of masala tea in clay cups at a roadside steaming chai stand. Entranced by the aroma of the gingery-sweet-milky tea, we totally forgot the traveling tips No.1: “Do not drink water from anywhere other than a bottle.” 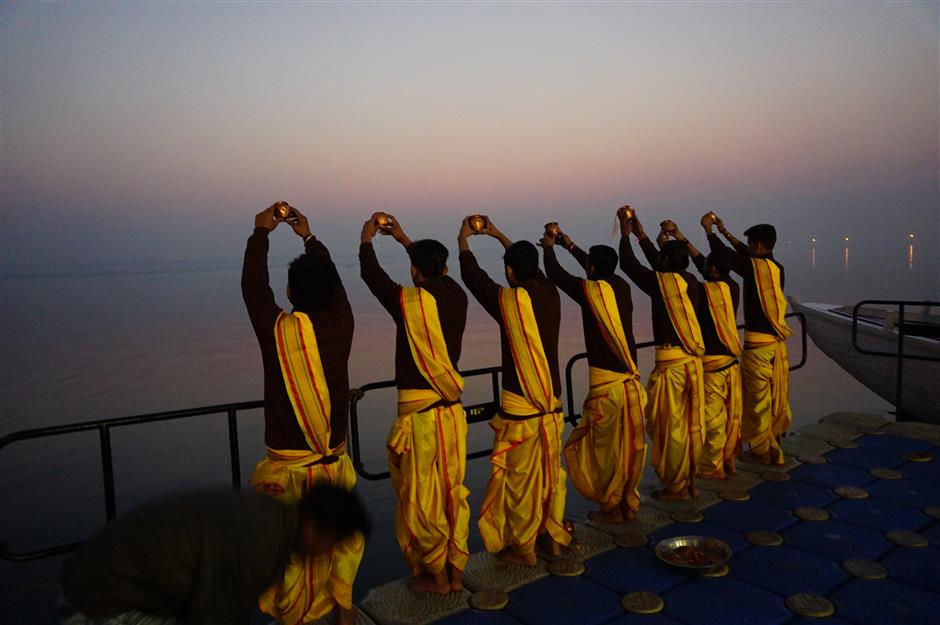 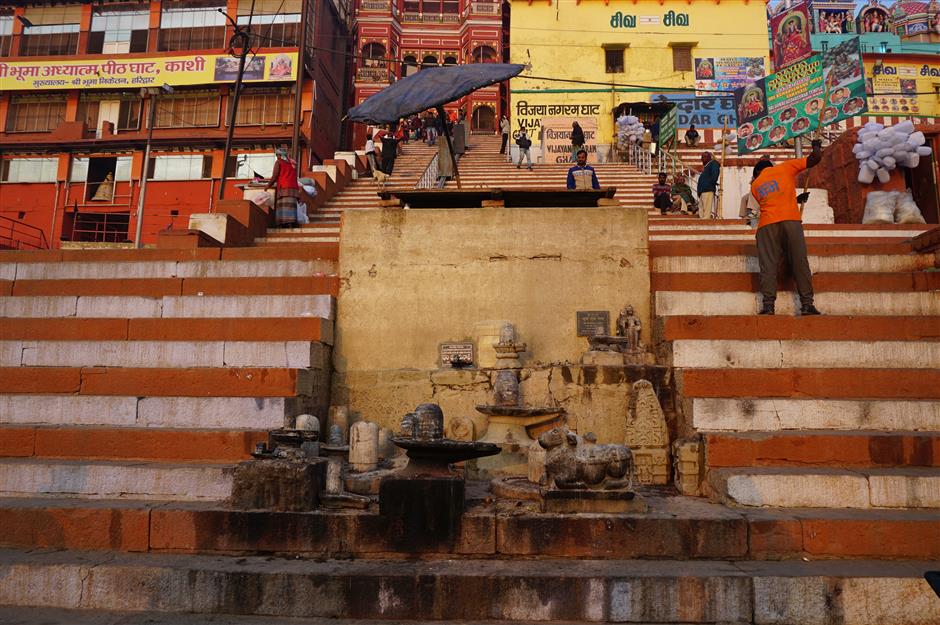 A praying ghat in Varanasi, with steps leading to the Ganges.

Two of our team mates followed the example of the locals to take a dip in the Ganges after the morning prayer. 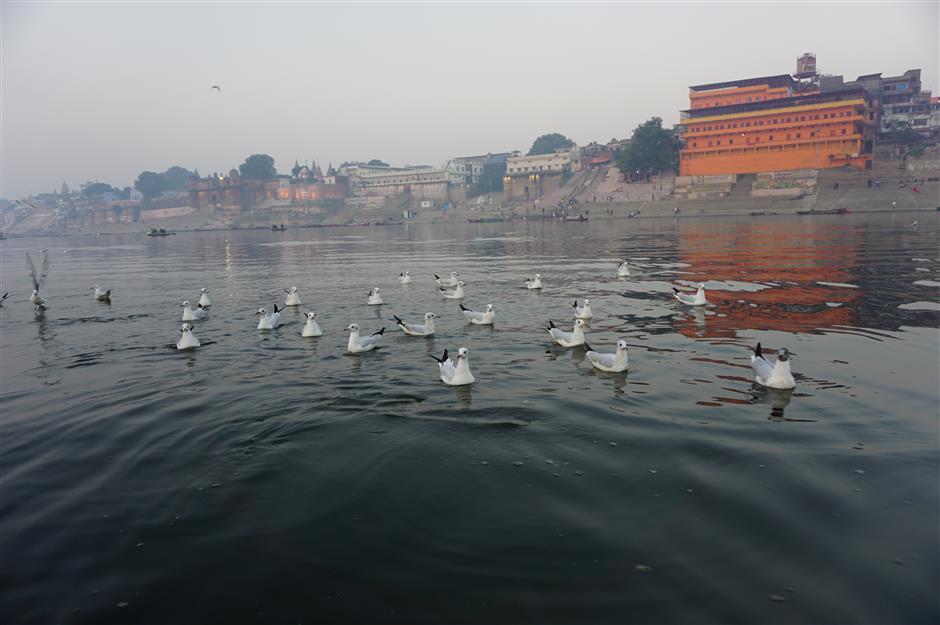 Siberian white cranes have adopted the Ganges as their winter site.

It turned out to be pretty good. The small cup, called a kullard, is a traditional single-use cup served at most of the chai stalls in India, an eco-friendly alternative to disposable cups of paper or plastic. Later, on the roads in India we would have tea in them and enjoy the sound of it smashed to earth. What could be more fun and satisfying!

The next morning the sun was big. Two of our teammates followed the example of the locals to take a dip in the Ganges after morning prayer. A family of brothers happened to be just finishing theirs. One of them kindly showed us the rope down the steps under the water, and told us that they had just spread their father’s ashes into the river in the hope that his spirit can be released in the heaven. The Ganges is supposed to be holiest water in India. Bathing in the Ganges, he said, could cleanse one’s sins and bring salvation.

In the seventh century, the Chinese monk Xuanzang set off on an epic journey to India to study Buddhist philosophy from the Indian masters. On his journey he sailed down the Ganges River to Mathura, then on to the holy land of Buddhism — Sanarth — where Buddha preached his first discourse in the Deer Park as an enlightened being.

According to him, the Deer Park was a forest given by the king of Benares, where deer might wander unmolested. Today it is a relics park in Varanasi where devoted followers come to pay homage and say prayers.

Surrounded by ancient Buddhist monastery ruins, the Dhamek Stupa is the most massive structure in the park. The basement facade is chiseled and displays delicate floral carvings of Gupta origin. The wall is covered with exquisitely carved figures of humans and birds, as well as inscriptions in the Brahmin script.

Today the Deer Park, where Buddha preached his first discourse as an enlightened being, is a relics park of ancient Buddhist monastery ruins. 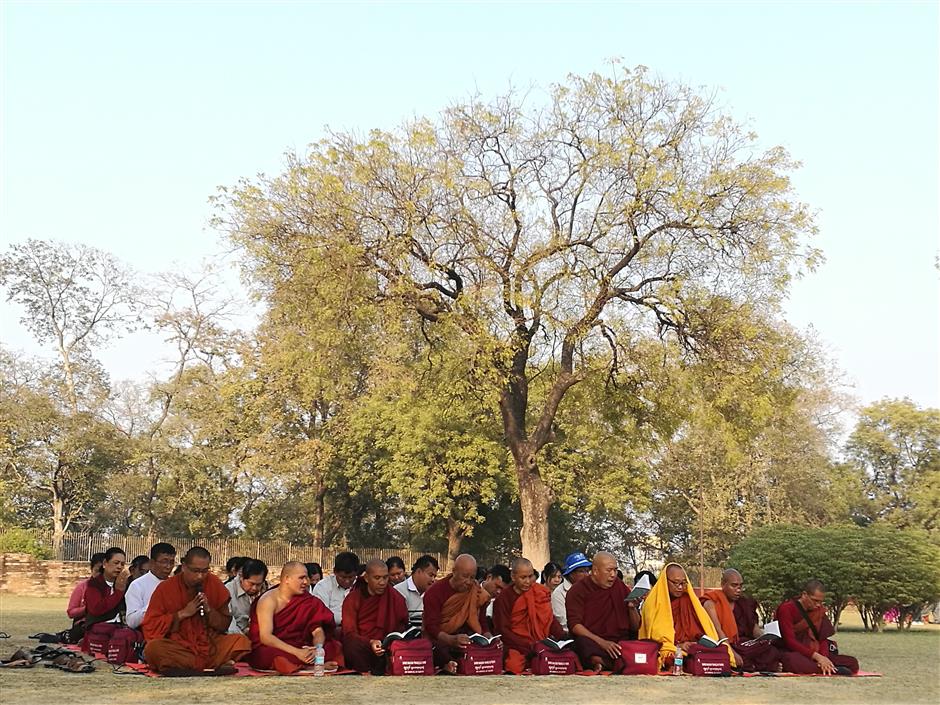 Buddhist monks and devotees say afternoon prayers beneath a tree in the Deer Park of Sanarth. 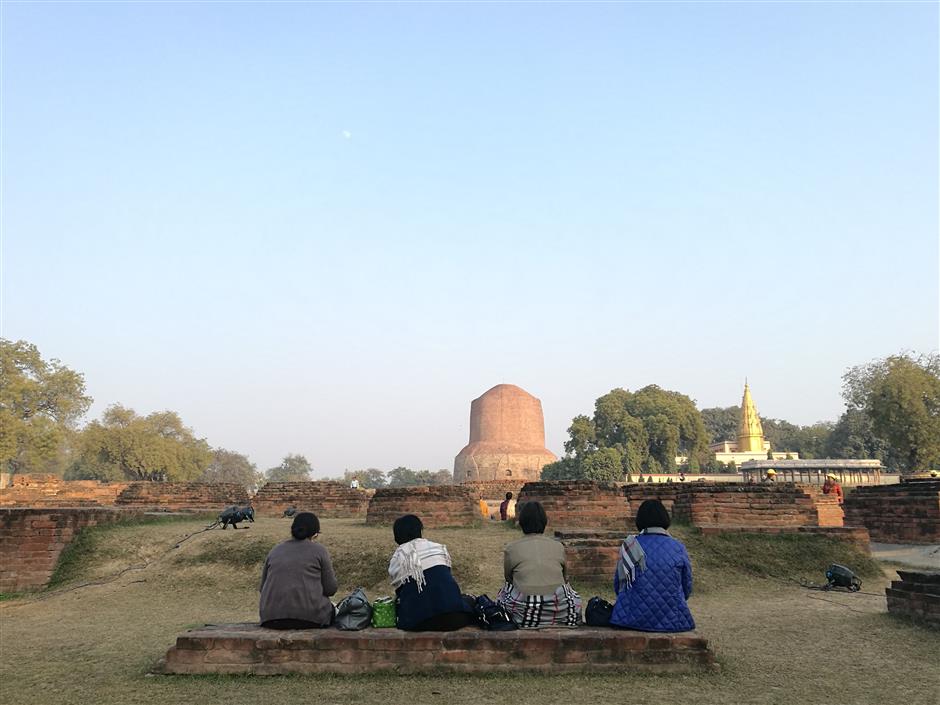 Visitors experience peace and tranquility at the Deer Park of Sanarth. The Dhamek Stupa is the most massive structure in the park.