Returning to the 'homes of honor' with pride

Tang Jinbo first visited the Caoyang Community in June 1952 with his father, a model worker at the Shanghai Huatong Switch Co, surrounded by flowers and gongs and drums.

He was among the first batch of families of 114 local model workers proudly moving into the modern houses with red tiles and yellow walls.

It was a great honor at that time to live in the community, known as China's first workers' community, or the "Model Workers' Village," said Tang. The neighborhood also was part of the city's early batch of "new communities," featuring tap water, electricity and gas in its shared kitchens.

"Though the apartment covered only 20 square meters, my parents and I felt happy and proud," said Tang.

After a yearlong renovation of the Caoyang No. 1 Community, some 300 households, mainly descendants of model workers like Tang, returned to their refurbished homes with pride.

The major facelift of the Caoyang Community, the largest-scale renovation since the community was built in the 1950s to answer the call of then Shanghai Mayor Chen Yi to "serve the working class," has restored the original look of the neighborhood while reinforcing the building structure. 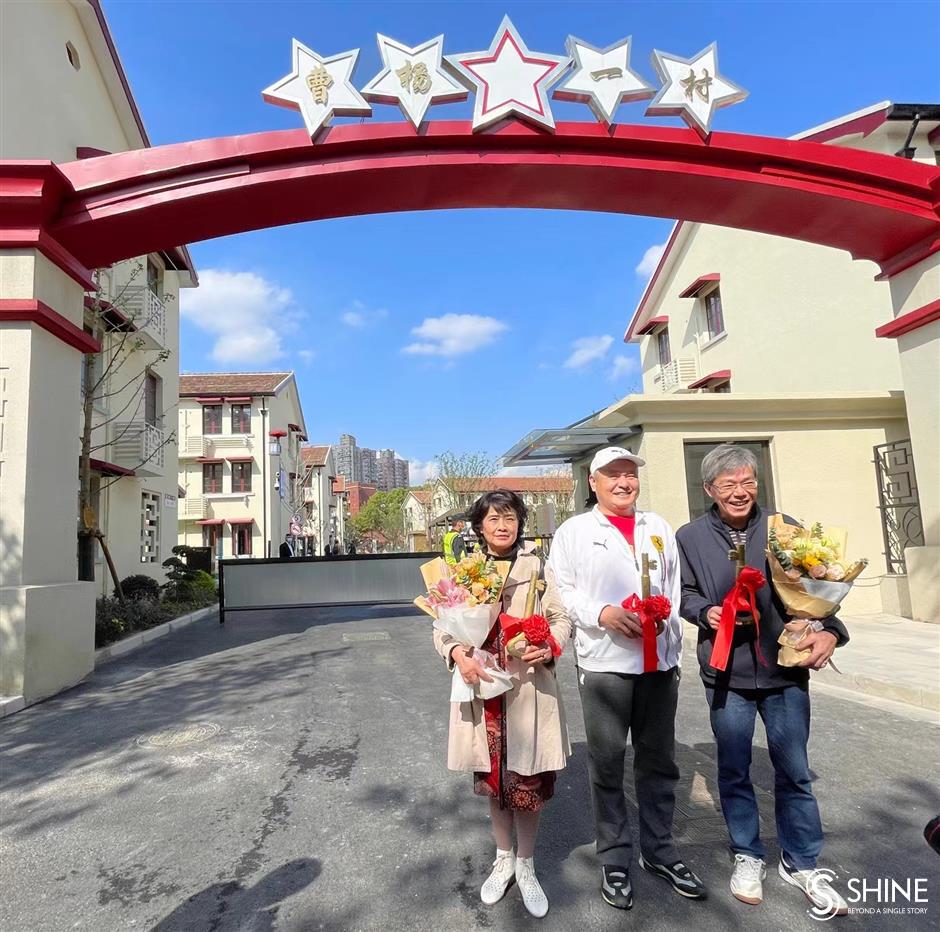 Zhu Huimin (center) and Xing Meifang (left) pose with a neighbor at the entrance of the renovated Caoyang No. 1 Community.

The brick-and-wood structure has been changed to steel and concrete, while the interior layout has been redeveloped to add about 8 square meters of space to each household with private toilets and kitchens.

All 1,500 families, who have been temporarily relocated to give way to the renovation, will move back to their brand-new apartments complete with modern facilities by the end of the year.

The community originally had 48 two-story, brick-and-wood houses to accommodate the first batch of 1,002 model workers selected from local state-owned companies and factories.

The planning, design and construction of the neighborhood represented the most advanced concept of a modern community. The houses with red roofs and yellow walls were covered by trees and flowers.

Xing Meifang, 68, grew up and got married in the community. Her father-in-law was a model worker at a state-owned cotton and textile plant. Five family members lived in a 20-square-meter apartment for decades.

"We were among the few local communities that had gas and tap water at that time," Xing recalled. "I would smile even in sleep after moving into the house." 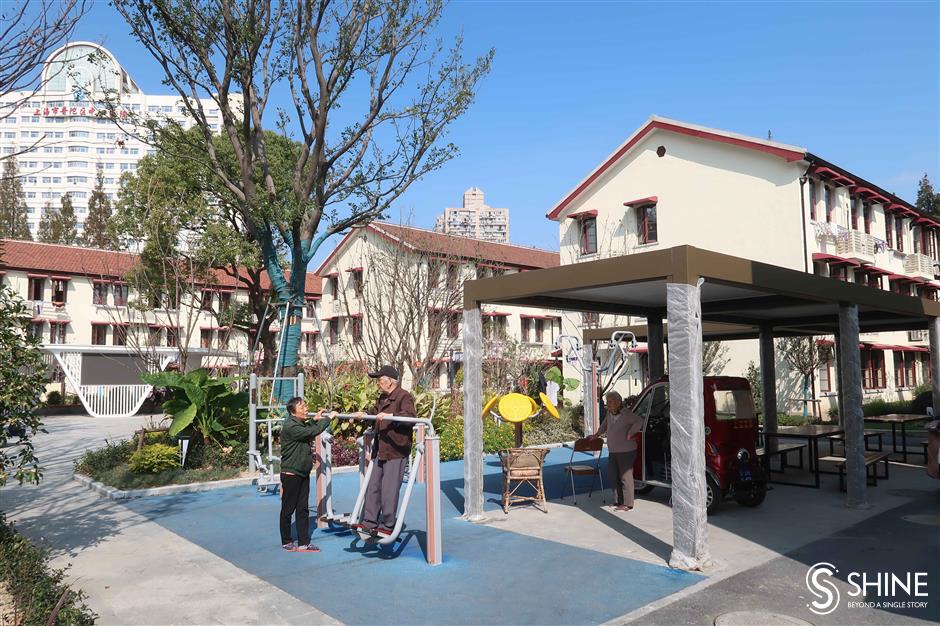 Residents do exercises on the new equipment at the Caoyang No. 1 Community.

However, as the population aged, the high-rise buildings which were once a source of great pride became a source of stress.

Walls have cracked while the wooden floors creak and are plagued by termites. The stairways are crammed with the inhabitants' belongings. The shared kitchens have become oily and dirty, and residents have difficulty enjoying a warm bath in winter.

An additional floor was later built on the structures to offer more space, imposing a heavier burden on the aging buildings.

"Without revitalization, the profound history of the community might be forgotten," a designer for the renovation project said.

Shanghai built 18 "workers' communities" in the 1950s, but many are in poor condition now.

Featuring 20-square-meter apartments with communal kitchens and bathrooms, the homes were much sought-after at the time and were offered only to the very best workers.

The renovation aims to become a pilot project for other local workers' communities, according to the Caoyang Subdistrict.

The additional third floors were rebuilt to be in harmony with the original features of the buildings. The appearance of the structures has been preserved as its old residents remember them. 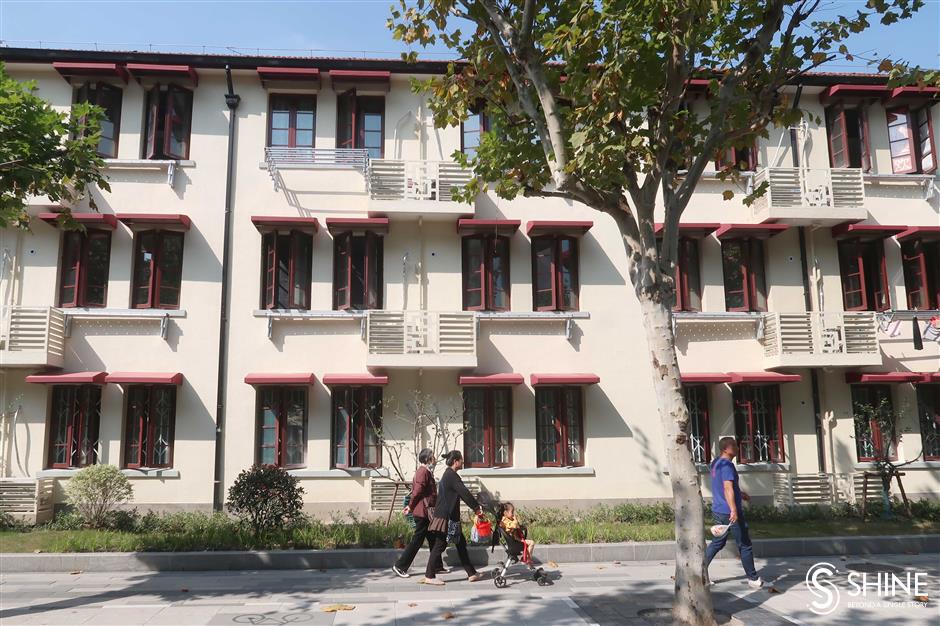 The structure of the houses has been reinforced.

Wooden stairways have been replaced with concrete and adjusted to allow additional rooms for private toilets and kitchens. Specific plans have been tailored to each household.

Zhu Huimin, 62, could not stop laughing after entering his new apartment with two bedrooms and one sitting room. He bought his neighbor's flat two decades ago, and during the renovation the two apartments were combined according to his request.

"It was once a pride to serve friends at home," Zhu said. "The pride will be back soon after I move in," he said.

Shi Huan, an official in charge of the project with the subdistrict, said every brick and tile of the historical community have been retained.

"The community's historic, cultural and artistic values are expected to be retained to a great extent," Shi said. "The designers have also tried their best to create additional living space for the inhabitants," he added. 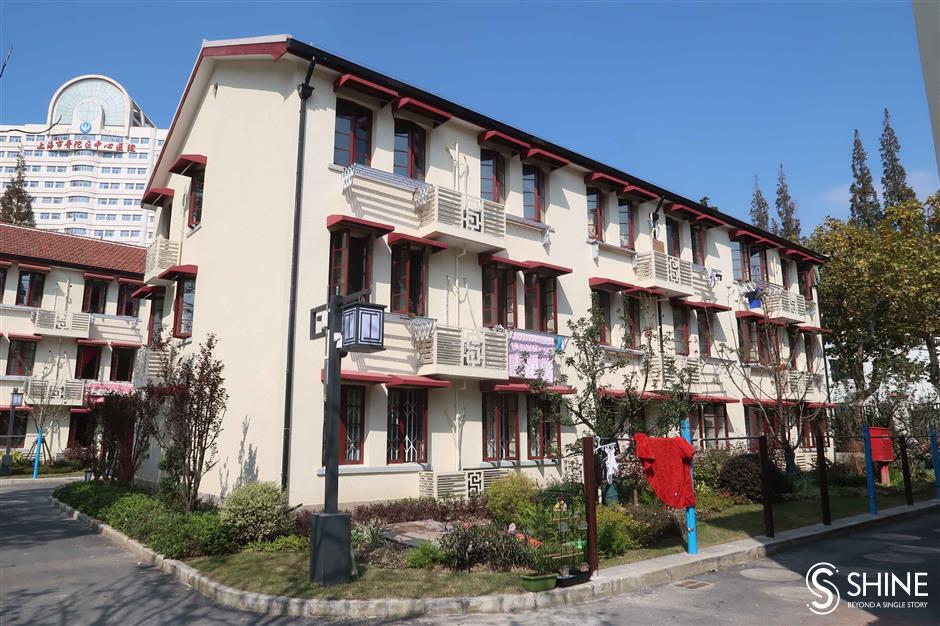 The houses built in the 1950s have their original look restored.

An S-shaped decoration outside each building, which stands for Shanghai, has been fixed and retained, while some broken red tiles on the rooftops have been restored by senior masons recruited from neighboring Jiangsu and Zhejiang provinces, said Shi.

Residents' opinions have been widely heard ahead of planning. Designers spent two weeks talking to residents, many of them senior citizens. The talks highlighted major problems, such as a shortage of exercise space, outdoor seating and parking slots.

To answer some common demands, dozens of modern street lamps have been installed across the community. The lamps can not only illuminate the streets automatically but also integrate signals from surveillance cameras, public radio, Wi-Fi and 5G. Drones can perch on the lamp posts to monitor the protection of the historical buildings.

The Putuo District government welcomed the residents back with gongs and drums on October 29, just as decades ago when their parents were welcomed when the community was built.

Tang said it reminded him the day when he first entered the community seven decades ago.

"That day and today mark the two happiest moments in my entire life," said Tang, 73. 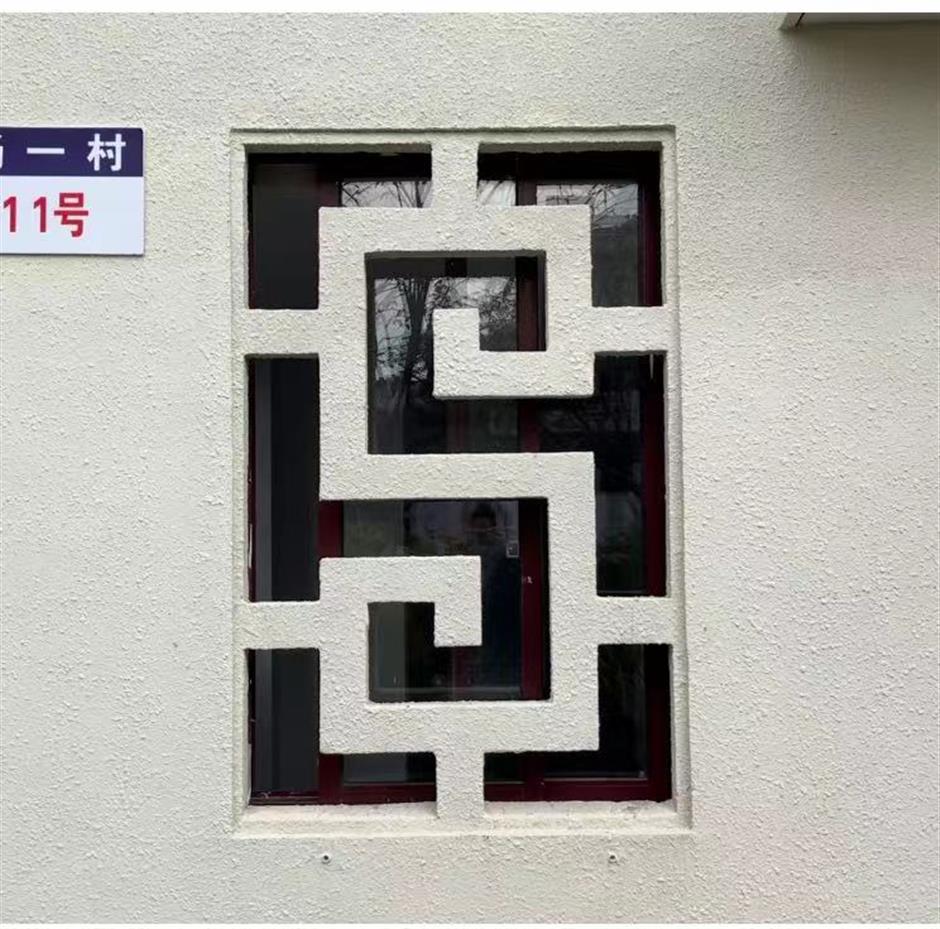 An S-shaped decoration outside each building, which stands for Shanghai, has been fixed and retained. 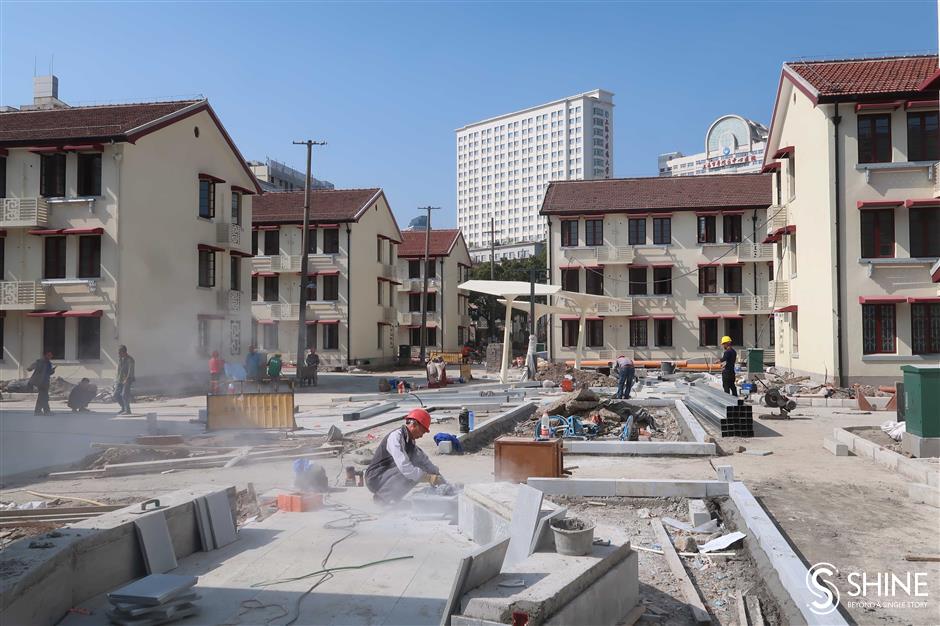 Renovation is in full swing for other houses in the Caoyang Community.