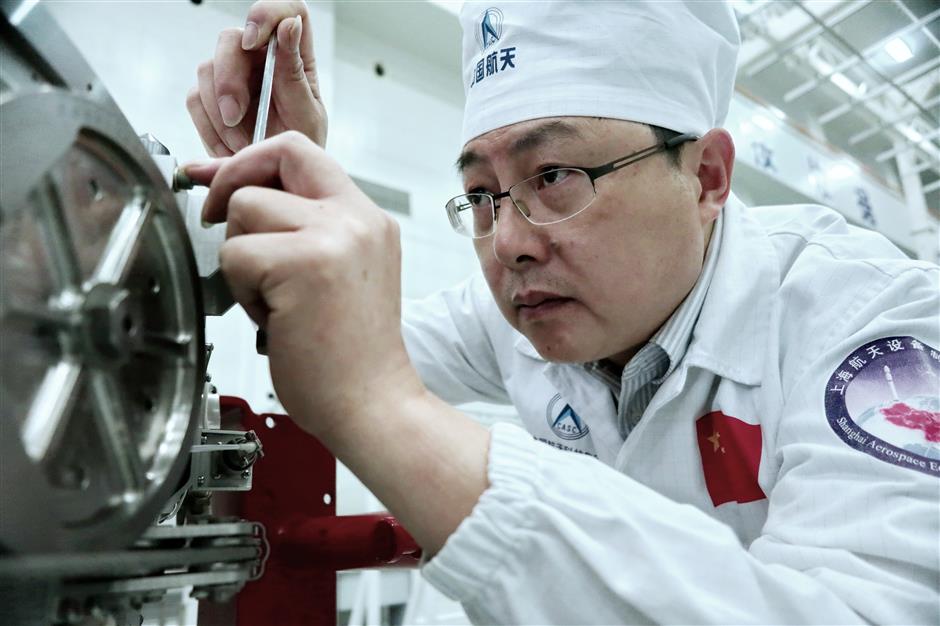 The prototypes of the Shenzhou-8 spacecraft and the Tiangong-1 module failed the last thermal vacuum test. The two parts could not be unlocked and separated, which might lead to a delay for the launch of the Tiangong-1, China's first space laboratory.

Wang Shuqun, the chief technician at the Shanghai Academy of Spaceflight Technology and the team leader of the docking system assembly team, analyzed the malfunction and found out that the key problem was a broken transmission shaft.

The problem was soon solved.

China has since become the world's third-largest space power, following the United States and Russia in its mastery of the technology of space docking agency.

The docking of the Shenzhou-8 spacecraft and Tiangong-1, and the successful landing of the lunar rover Yutu-2 are among the breakthroughs in Chinese spaceflight that highlight Wang's more than 30-year career.

In the latest landmark achievement, three Chinese astronauts onboard the Shenzhou-13 entered the nation's space station core module Tianhe after a successful automated rendezvous and docking.

"I'm lucky to catch up with the rapid development of China's aerospace industry," said Wang.

As a top technician, Wang has won numerous awards such as the nation's "Model Worker" and "Most Beautiful Worker" as well as "Scientific Progress Award." He also serves as part-time vice president of Shanghai General Trade Union and a representative of the Shanghai People's Congress, the city's top legislature.

"It is national recognition for the achievements of the Chinese spaceflight program," said Wang. "It is an honor that belongs to the whole team that has contributed to this effort."

Wang got in on the ground floor of China's aerospace industry. He began working at the spaceflight technology center in 1989, fresh out of a technical school. 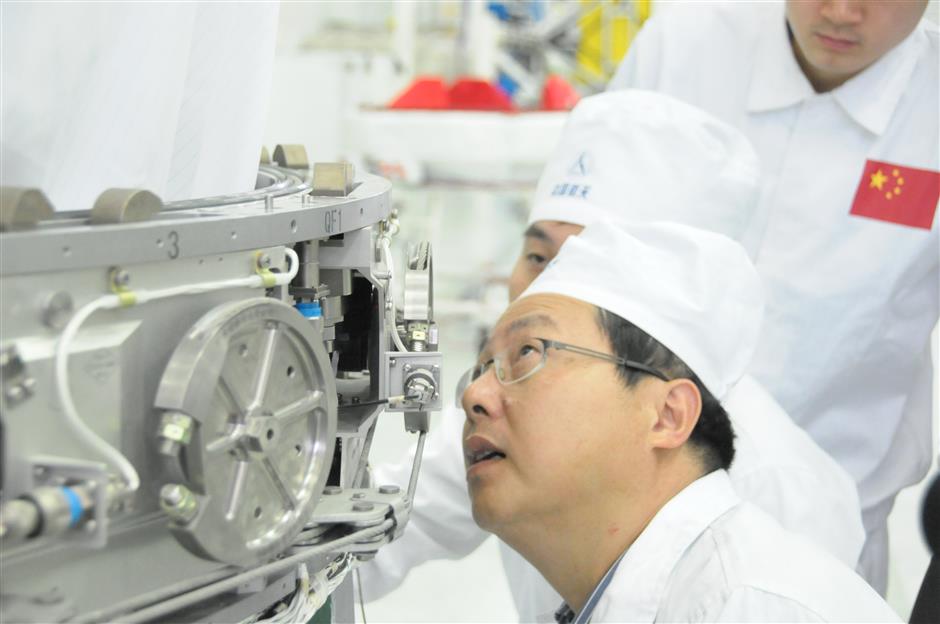 Wang recalled his initial task had nothing to do with space exploration, but was to engage in the assembly and maintenance of tooling and abrasives. The two-year senior technician training course gave him solid basic skills.

Everything changed after China's project for manned spaceflight was approved in January 1992. Since 1996, Wang has been assigned to work on the docking system.

The system requires two spacecraft – each weighing about 8 tons and flying 300 kilometers above Earth – to link up precisely while moving at high speeds.

Wang was tasked with designing a complicated system, with a ring-shaped docking structure 1.5 meters in diameter, with more than 100 critical motion, location and temperature sensors, and thousands of other parts. The whole process required pinpoint precision.

He often had to lead his team to finish a thermal circulation experiment for a continuous of 37 hours. They kept awake with cold water, and fed on biscuits.

The task took Wang and his team 16 years to perfect when China's first space docking was completed in 2011.

Since then, China has finished 15 docking missions, including the latest Tianhe space station and its supply module and manned spacecraft.

The docking had to be stable and precise to within a millimeter, with the lab and the spacecraft moved at 7.9 kilometers per second, otherwise the contact pins would have been damaged and signals between space and ground lost.

One of the biggest challenges was that the 12 connection locks could not separate as designed, which troubled the team for nearly two years.

To make two roughly 8-ton modules pair in space, the key lies in the 12 locks. They must lock and separate at the precisely the same time. 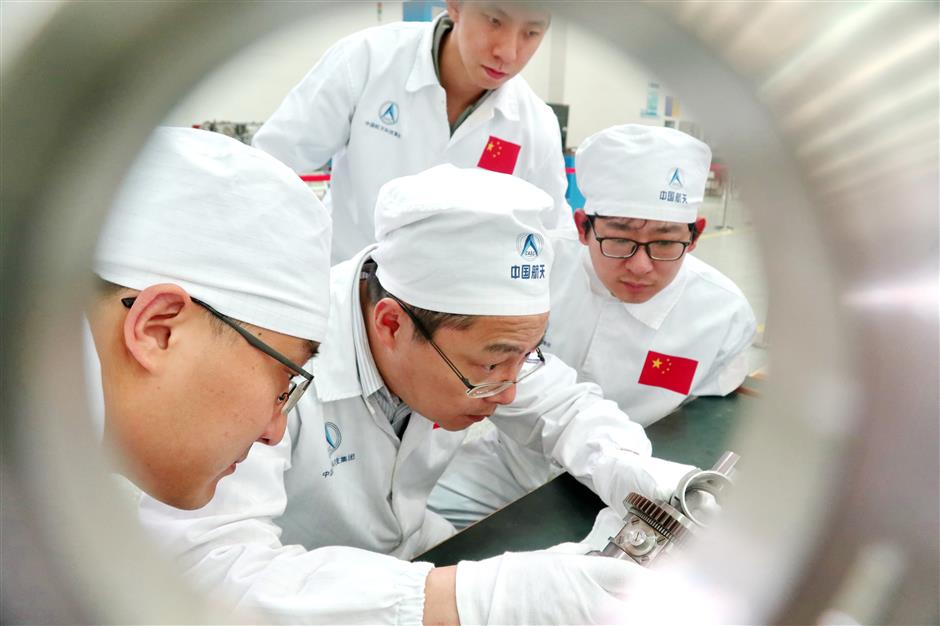 Close attention to detail is vital.

After rounds of review, the issue was located in assembly, but no one knew the cause.

After about a year of tests, Wang finally found the issue – the malleability of the steel wire. The weakening tension of the wires resulted in the locks being unable to sync. Wang then suggested changing the rotation direction of the cables and adjusting the method used in the sync process.

To meet the needs of China's more frequent space missions in recent years, Wang has led his team to enhance production efficiency while ensuring quality.

They had to conduct assembly, testing and experiments simultaneously. A series of common standards for the docking systems of both manned and cargo spacecraft have been made, which has helped to shorten the product delivery period to six months from 10 previously.

"We were given 16 years to complete the first space docking, but might only have two or three years now to finish the whole research and production process of a new system now," Wang said.

To promote his experiences, Wang has completed 15 essays, had five patents approved and written the textbooks and guides for rocket fitters.

He has also launched a workshop to give young technicians on-the-job training with other experienced technicians in the factory, including how to apply for patents and write application documentation.

"The public is paying increasing attention to innovation from front-line workers," he said. "I hope we are not only passing on skills to the young technicians, but also the ability to sum up their own innovation achievements and pass them on. 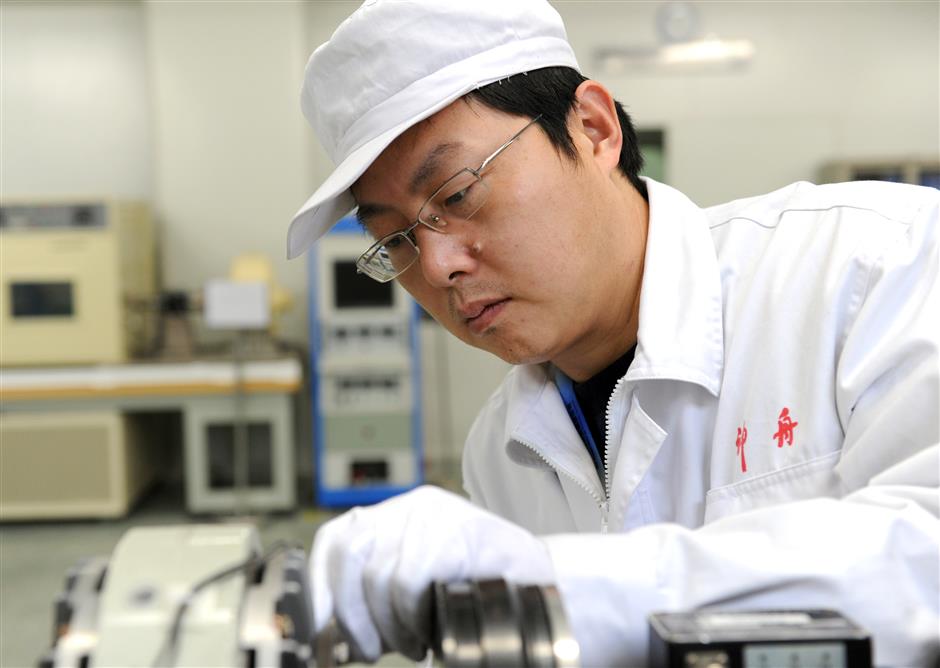 So far, Wang's training workshop has cultivated 25 technicians and 67 senior specialists, covering every sector of the aerospace industry.

Young technician Xia Qiaowei joined Wang's team in 2010. With Wang's recommendation, Xia was given the mission to develop the lunar rover Yutu, or the Jade Rabbit.

A lab the size of a basketball stadium was used for testing. To reproduce the lunar surface, mountains of loose ash was piled in the stadium. Xia and other technicians were required to wear suits, masks and goggles throughout all testing.

"I felt every endeavor was worthwhile with the successful launch of the Chang'e-3 lunar probe," Xia recalled.

The 32-year-old technician has become a master himself with several apprentices.

After the successful docking of Shenzhou-13 and Tianhe, the three taikonauts will stay in orbit for six months, setting a new record for China's crewed space mission duration.

Wang said he was ready to make additional contributions to China's aerospace sectors. He has pinned a note to himself and other colleagues: "Feet on the ground, and we look up at the starry night sky." 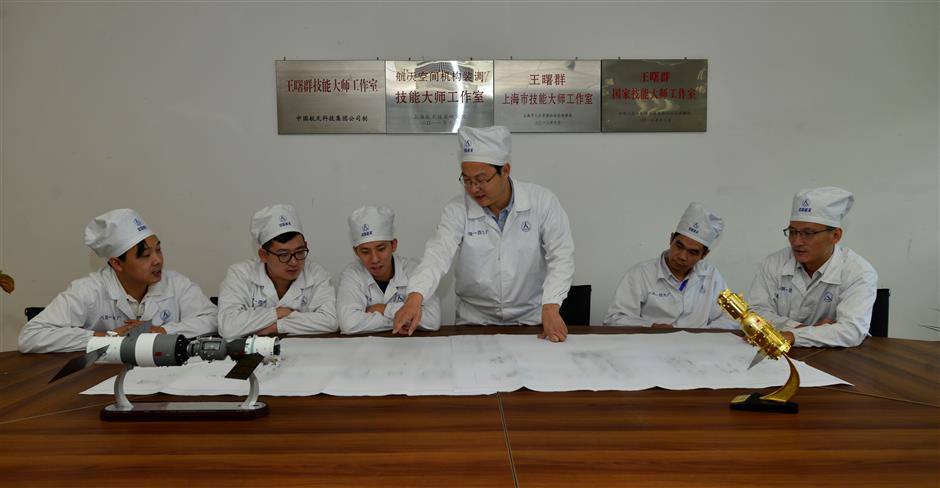 Wang Shuqun works with his apprentices.