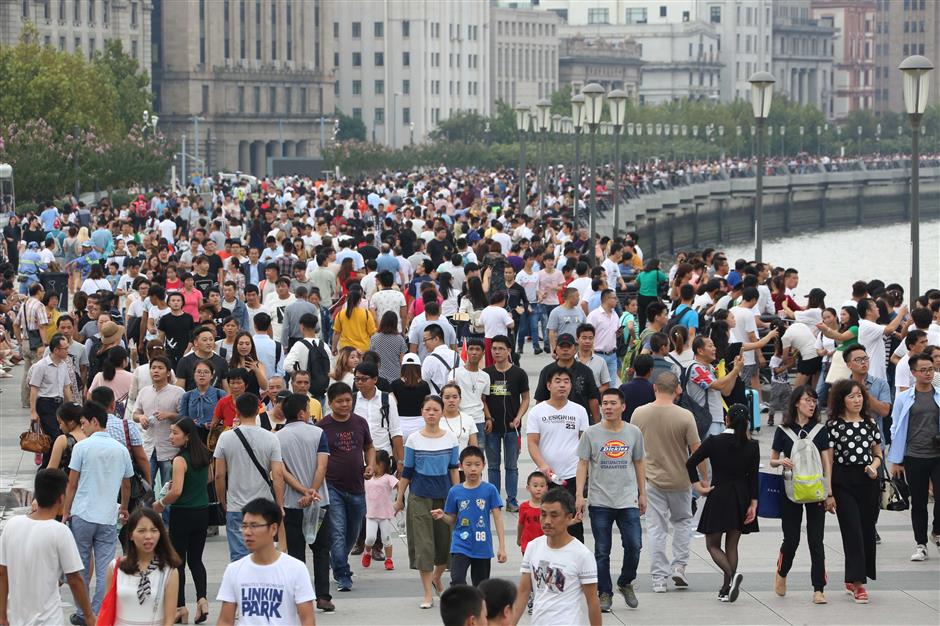 Tourists visit the Bund during the National Day holidays.

Tourist numbers for Golden Week this autumn — combining National Day and the Mid-Autumn Festival from October 1 to 8 — remained steady, with about 10.6 million visitors.

Those who stayed overnight spent an average 1,023 yuan (US$157) daily during the holiday, up 2.4 percent, the Shanghai Tourism Administration said yesterday.

But the mix changed dramatically, with some venues recording strong increases and others seeing visitor numbers plunge.

The Bund, Yuyuan Garden, and the Nanjing Road Pedestrian Mall were the most popular destinations for tourists from abroad and from around the country, while newly opened suburban parks drew the locals.

With the construction of 45 kilometers of uninterrupted pedestrian paths along the Huangpu River, cruise trips were also increasingly popular — with numbers topping 120,000, an almost 23 percent increase from the same period last year.

Tourist attractions across the city offered everything from music to food and magic to lure the crowds.

More than 149,000 people visited the landmark Oriental Pearl TV Tower, down 13 percent. But the Shanghai Wildlife Park welcomed 239,000 people, up 19 percent, according to the tourism office.

Shopping accounted for more than a third — 36 percent — of spending.

The number of travelers passing through Hongqiao and Pudong airports between September 30 and October 7 jumped 6.6 percent to 874,000 from a year ago.

Travel agencies in the city organized a total of 104,000 outbound tourists, surging 62.4 percent.

But the number of visitors to Shanghai between October 1 and October 4 fell 2 percent from the same period last year to about 5.2 million, due to rainy and overcast weather, officials said.

Mild temperatures and sunny weather in the second half of the holiday boosted the figure, the bureau said, adding the peak was from last Tuesday to Saturday.

The city’s parks hosted a variety of activities, from an autumn flower and butterfly exhibition to a forest beer festival and a folk festival, spurring visitor numbers, the bureau said.

Landscape lights illuminated the city during the holiday, and nine areas such as People’s Square and the Bund were spruced up with flowers and landscaping. 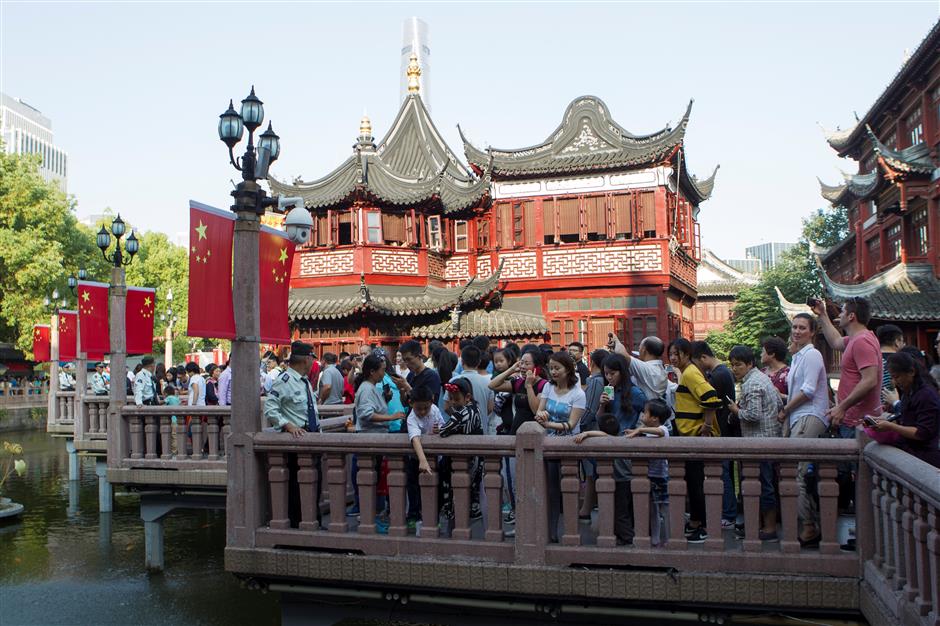 Tourists throng the Zigzag Bridge at the ancient Yuyuan Garden.

But the city’s consumer watchdog saw a 14 percent jump in complaints, to 1,341.

Most were about accommodation, express deliveries and services such as shared bikes, the Shanghai Industrial and Commercial Administrative Bureau said.

One tourist who bought a package to the popular Thai resort island of Phuket complained the guide did not pick him up at the airport as promised.

Another, who bought a package to Tokyo and Osaka online, said the hotel did not match its online description, the bureau said.

The bureau did not name the online platforms involved.

The number of complaints about express delivery jumped 42 percent.

Delays and missing or broken items topped the list.

On the last day of the holiday, the city’s railway stations continued to see a flood of people returning home.

About 450,000 passengers were expected to arrive by train — 130,000 more than those who left by rail. Extra services were added on Metro lines 2 and 10 to cope with the influx. 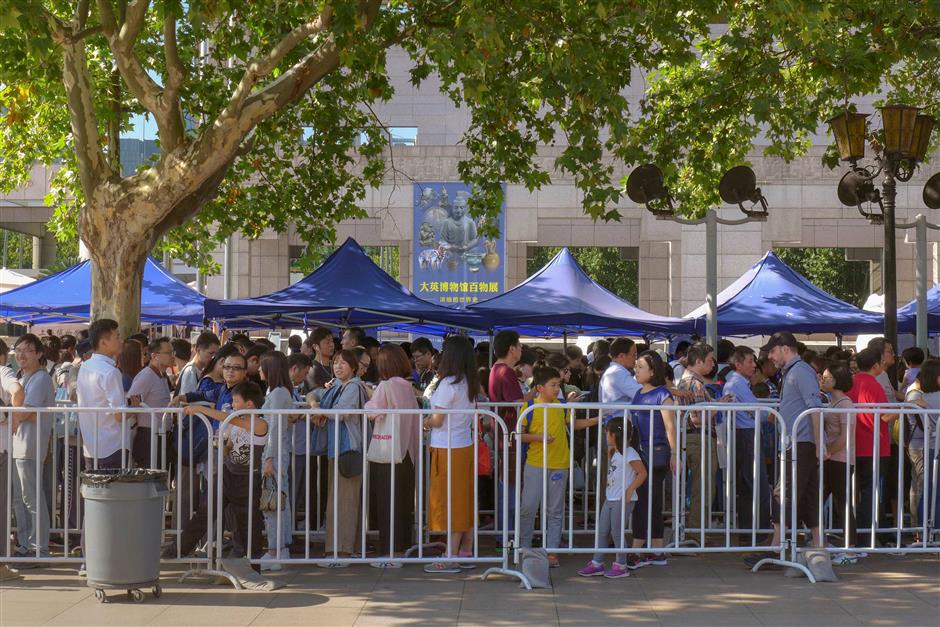 People queue for up to six hours to visit the exhibition “A History of the World in 100 Objects from the British Museum” at the Shanghai Museum yesterday, the last day of the popular exhibit. 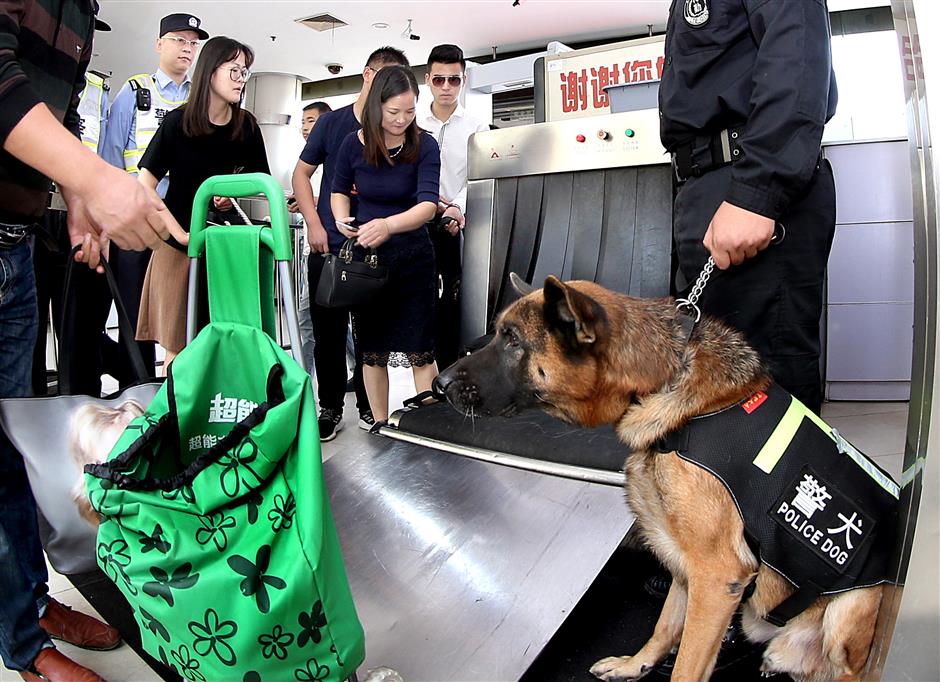 Policemen with dogs inspect the luggage of passengers at the Shanghai Long-Distance Bus Station to cope with the traffic surge as people travel back from their vacation at the end of the eight-day National Day holidays.