The sky is the limit for China's home-grown jet 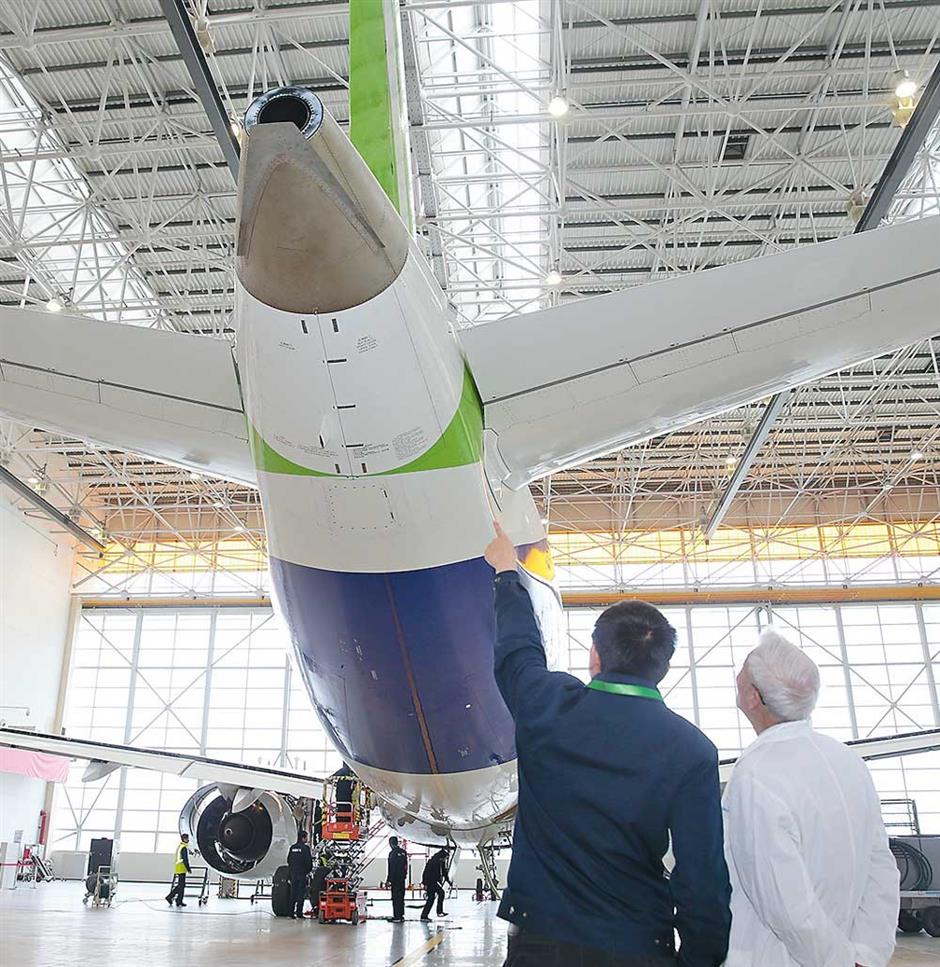 The C919 single-aisle aircraft made its maiden flight from the same airport on May 5, flying north to Chongming Island and over Nantong in neighboring Jiangsu Province, where it circled awhile before heading home.

The second flight — at two hours and 46 minutes — lasted twice as long. During the flight, the plane completed its first test of lowering and lifting its landing gear in the air, among other missions, according to the Commercial Aircraft Corporation of China (COMAC).

A day after the flight, COMAC and partner United Aircraft Corp of Russia announced that the first long-haul jet developed jointly by both countries will be named CR929, symbolizing the “enduring cooperation of the two sides.”

The wide-body jet will seat 280 and have a range of up to 12,000 kilometers. It is scheduled to make its maiden flight in 2025 and begin deliveries in 2028, according to the China-Russia Commercial Aircraft International Corp, a joint venture based in Shanghai’s Free Trade Zone.

In terms of global aviation, China is thinking big. It has been on a more than three-decade quest to rise to the ranks of nations capable of designing and manufacturing commercial aircraft.

“The C919 marks a new high for China’s aircraft-making,” said Cheng Bushi, 87, the deputy designer of the Y10, China’s first commercial jet, designed in the 1970s. The Y10 with 125 seats flew for more than 170 hours in test flights between 1980 and 1984, but the project was scuttled before reaching commercial viability because of economic and political factors.

Despite setbacks and frustrations, China’s commercial aircraft industry has never looked back. Its progress has been supported by thousands of engineers and aircraft designers.

COMAC was established in Shanghai in 2008 to take charge of developing the C919 project. Though the company is relatively new, many of its senior engineers are veterans of China’s aircraft ambitions.

Zhang Xijin, 83, his son Zhang Miao and Zhang Miao’s apprentice Ma Tuliang are the famous “three-generation trio” at COMAC, who are working together on the C919 project.

Zhang Xijin, a famous aerodynamic specialist, served in a senior position in the COMAC Shanghai Aircraft Design and Research Institute. He took part in the design of eight Chinese aircraft, including the ARJ21, the nation’s first domestically developed regional jet.

“Research conditions were quite tough in the 1970s, when China initially began research on aircraft-making,” Zhang Xijin said. “We often borrowed abacuses from neighboring offices to do calculations.”

Zhang Xijin’s wife Wang Juanzhi was an aerodynamic specialist. Small wonder with parents so concentrated on their jobs that son Zhang Miao didn’t also answer the call of the nation’s aircraft dream. After all, his first name is a Chinese character involved with aerodynamic structures.

Zhang Miao did not disappoint his father. He has become the deputy design director for the C919. 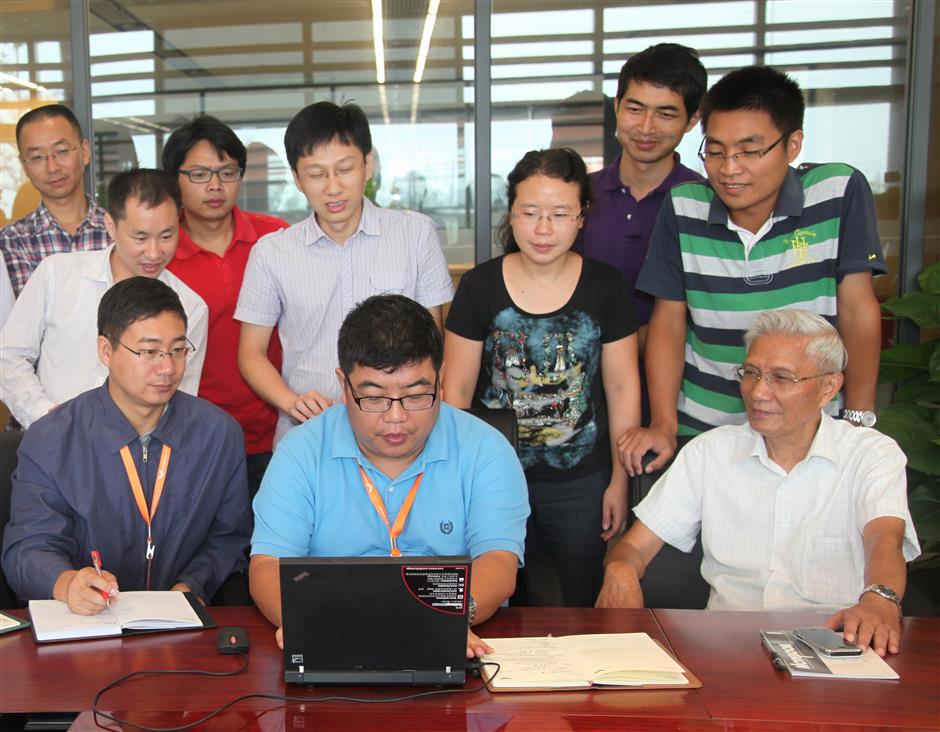 Zhang Xijin (front right) and Zhang Miao (middle, front row) work with their team on the maiden flight of the C919.

“Work has been more important than my personal life,” he admitted.

Zhang junior said working conditions have improved since his father’s pioneering work in the field, but challenges remain. China has the full intellectual property rights on the C919, based on charts his team painted for the nose, body, wings and other aircraft parts.

“We painted over 2,000 design charts for the wings alone,” Zhang Miao said.

Ma Tuliang, an aerodynamic engineer with the institute, was a postgraduate students working under Zhang Miao. He assisted his tutor on the design of the winglets for the C919 and has since become a key aerodynamic designer for the CR929 wide-body passenger jet.

“The most precious thing I learned from the older generation is that gritty determination to succeed,” Ma said.

“With the advanced technology and facilities nowadays, we aim to make some breakthroughs based on the achievements of our forebears.”

The development of a domestically developed large passenger aircraft is “part of the Chinese Dream,” COMAC said.

“The project highlights the demands of China’s fast growing economy and the rapid development of China’s civil aviation industry,” a spokesman for the company said.

Predications are that Chinese airlines will need more than 6,800 new aircraft in the next two decades.

Furthermore, the aircraft industry is seen as a lynchpin in China’s industrial modernization.

Boeing has said every 1 percent increase in sales of airliners expands the national economy by 0.7 percent. The State Council, China’s cabinet, has designated the aeronautical industry as one of 10 pillars in its plan to make China a global manufacturing giant by 2025. 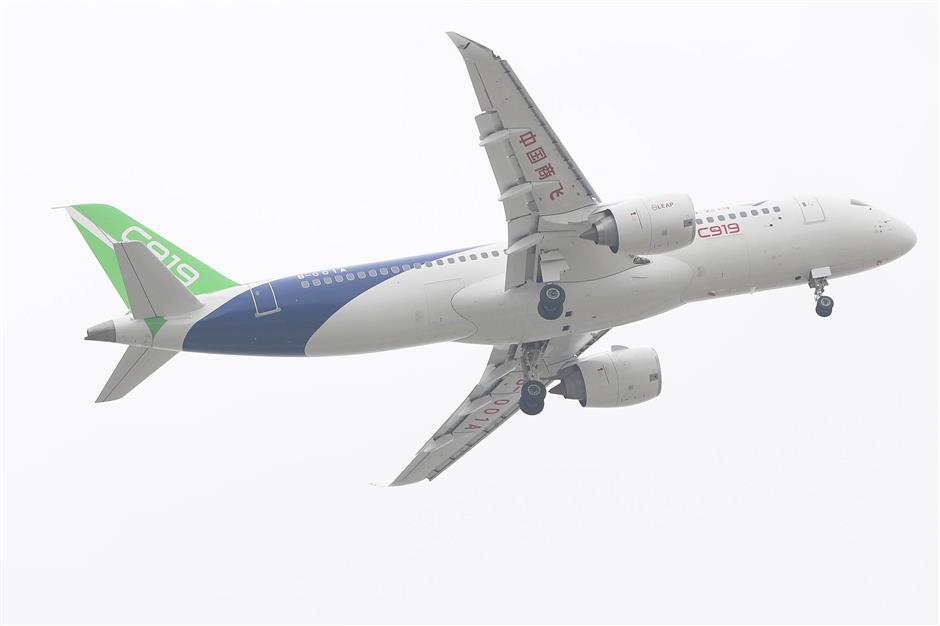