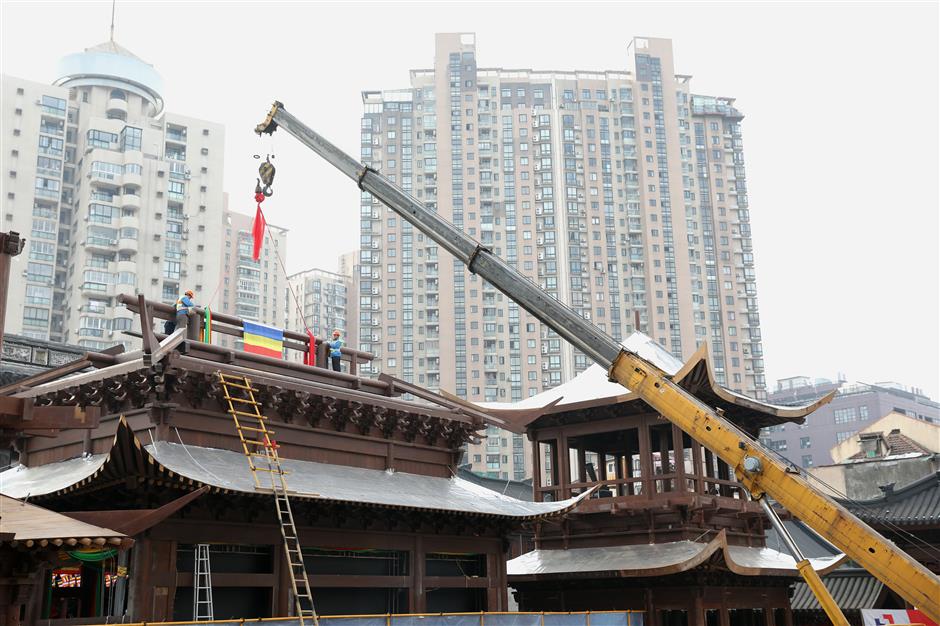 The top beam of the Buddha temple pavilion of Avalokitesvara, or Kwan-yin, was installed on the rooftop on Saturday morning — a key process for the temple's construction.

Construction started over the weekend on the rooftop of a new pavilion at Shanghai's 135-year-old Jade Buddha Temple as part of a major renovation campaign.

The tallest beam of the pavilion of Avalokitesvara, or Kwan-yin, was installed on the rooftop on Saturday morning — a key process for the construction of a Buddha temple pavilion. Tens of thousands worshippers and monks prayed for a smooth progress.

The new pavilion is being built near the former site of the historic Mahavira Hall, or the temple's main pavilion which has been moved 30.66 meters northward to make available a larger space in the main square for worshipers and visitors to pray.

The Kwan-yin pavilion will keep the same size and architectural style of the two original pavilions standing in front of and behind it.

The new building has been designed in the traditional imperial palace architectural style common to the southern part of the Yangtze River region during the Ming (1368-1644) and Qing (1644-1911) dynasties. 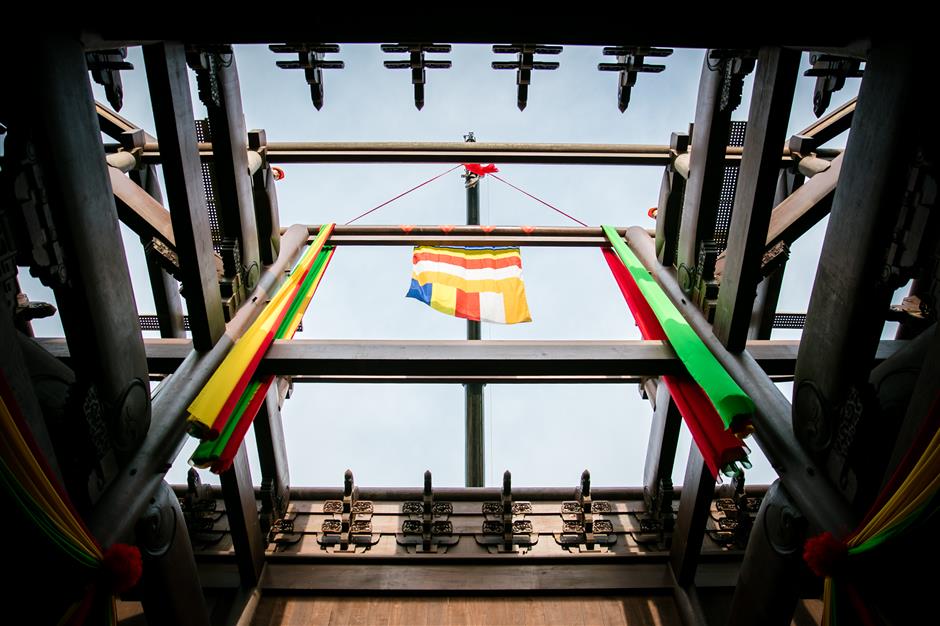 Carpenters will apply the traditional mortise-and-tenon technique, which requires no nails, for the whole construction process.

Carpenters will apply the traditional mortise-and-tenon technique, which requires no nails, for the whole construction process. Supreme Burma teak is used to both ensure stability and "highlight the holiness," an official with the temple said.

The new pavilion will also have floor-to-ceiling windows that can be removed during major religious ceremonies to allow more space for worshippers to pray.

After the hall is moved to its new position and the new pavilion is completed, the temple will present a more traditional Chinese temple style, temple officials said.

Visitors and worshippers will be able to pay tribute or pray through the Hall of Heavenly Kings at the entrance of the temple, the Kwan-yin Hall and the Mahavira Hall. The three pavilions will serve as the central axis of the Buddha temple. 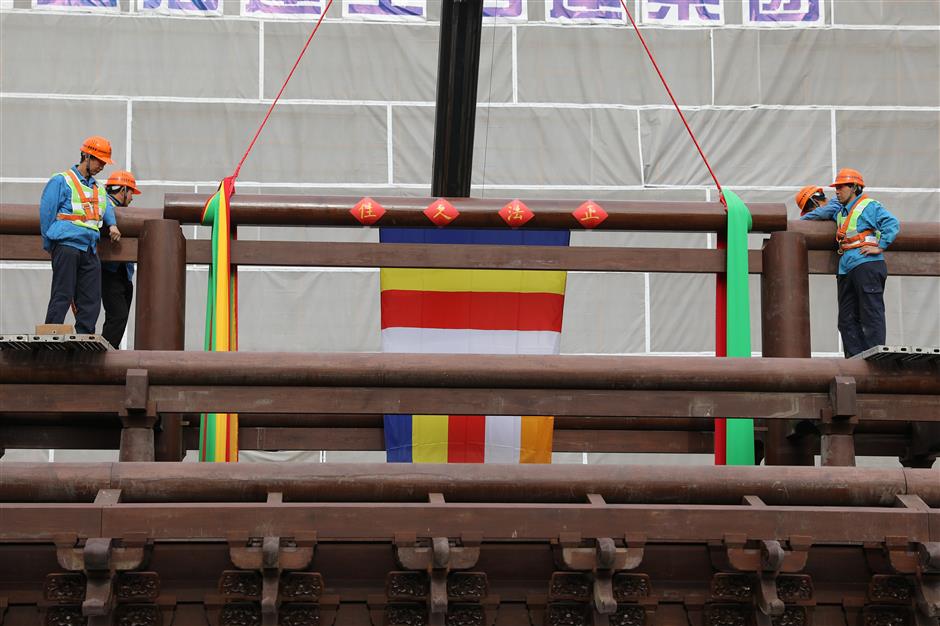 Workers wait for the propitious time to install the top beam on the rooftop of the Kwan-yin pavilion.

The temple was originally an old residential house, whose owner donated it to the temple to house the two jade Buddha sculptures from which the temple was named. Not surprisingly it gave the appearance a residential complex rather than a Buddha temple and it struggled to cope with visitor numbers and also posed a fire risk.

The renovation project was launched by the temple in July 2014 after the city's housing quality watchdog highlighted safety concerns, and pointed out that many buildings across the temple had been damaged by insects.

As part of the renovation campaign, the east and south pavilions beside Mahavira Hall have been replaced by wooden structures with modern fire safety facilities.

Another two smaller pavilions, the bell and drum halls, are also being built on either side of Kwan-yin Hall.

The entire renovation process will be completed by the end of the year. The temple remains open to the public while the renovation and construction projects are conducted.

Built in 1882, the temple is among Shanghai's most popular attractions, with 2 million visitors a year, a third of them from abroad. 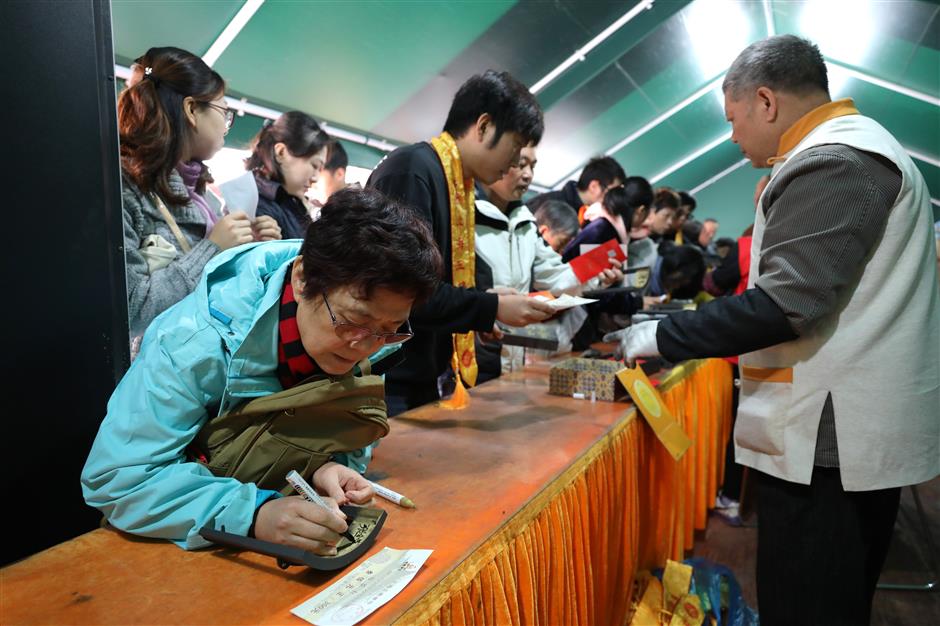 A worshipper writes down her name and wishes on a tile she claims for the new Kwan-yin pavilion. Worshippers can donate to claim tiles and bricks for the new pavilion, which is believed to bring peace and good luck to them and their families.